posted by Megan on October 25, 2012 This post may contain affiliate links.

Our little He-Man needed a Super Cape for this year’s Halloween costumes! A quick Pinterest search and an hour later, I had this!!!! 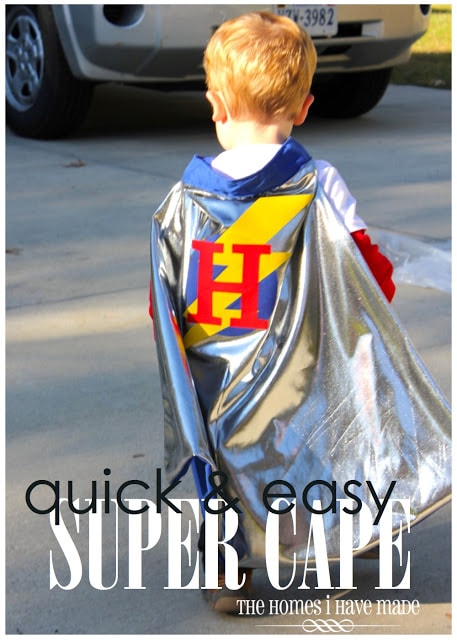 I found and (loosely) followed this tutorial from The Long Thread. I made a few adjustments based on Henry’s size and the final look I was going for!

Here’s what I did:

1. I cut out the cape pattern (using the tutorials exact measurements) out of shiny silver fabric (for the outside) and cheap blue cotton (for the lining). The pattern calls for 30″ in length, so I bought a yard and trimmed it down.

2. I then cut out and ironed on all my Super Hero design elements. I didn’t bother sewing them on because this was a somewhat rush job!

3. I then trimmed an inch off of each side and two inches off the bottom to make it a little smaller for my petite toddler. I didn’t bother trimming the lining since I could trim it down once it was sewn. I pinned the two capes together, right-sides facing.

4. I sewed the cape to the lining all the way around except for about 6 inches across the top of the collar (for flipping).

5. Using a scissors, I trimmed off all the excess fabric close to the seam.

6. I then turned the entire cape right-side-out.

7. On the RIGHT side of one end of the collar and the WRONG side of the other end, I attached two small pieces of velcro. This is so that when overlapped, the two velcro pieces meet up. I sewed the velcro in place.

8. I then pinned the top opening shut. (I did not sew this final seam shut, I just proceeded with the next step).

9. Lastly, I folded the entire collar down on itself (in half length-wise) and pinned the collar to the cape down the length of the collar. I finished the cape (and that open seam) by sewing all four sides around the collar.

Admittedly, the cape totally makes the costume, and Greg and I are a little jealous. Although I declared our Halloween costumes done, I wouldn’t be surprised if I found time to make two more over the next week! 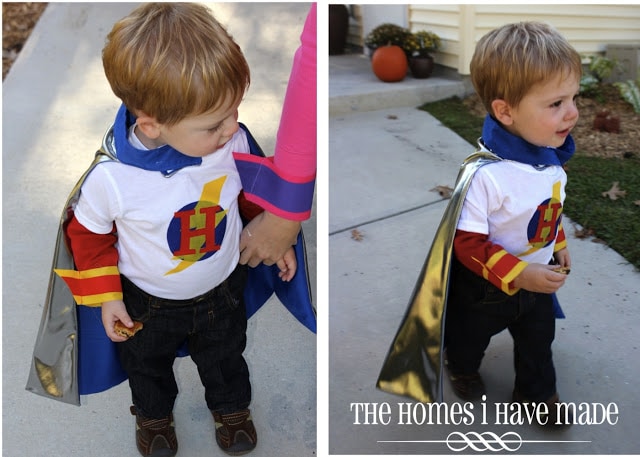 And for a little snapshot of reality: photo shoots with an 18 month old aren’t always so fun 😉

What are you/your family/your kids being for Halloween? Did you make the costumes? I always have a hard time getting myself motivated to make costumes…it’s just not really my thing. But once I get going on an idea, I always have a good time!!

Throughout this next week, I’m going to resume my organizational posts focused on our Command Center! Stay tuned!