posted by Megan on November 3, 2014 This post may contain affiliate links.

I am SOOOOO excited to share our Halloween 2014 costumes with you guys today! Every year, I feel like I hop on here and tell you guys how much I hate making Halloween costumes. And honestly, making clothes (and costumes) really is not one of my preferred past-times. There’s just something about making clothes (that actually have to fit) that scares me to pieces. But as a gal whose mom made every single Halloween costume throughout her entire childhood, going out and buying costumes just doesn’t feel right. And I will say, when your three-year-old asks for a very specific costume (or in this case, cast of costumes!), I am thankful to be able to deliver. And seeing his excitement as these costumes came to life made this entire “project” one of the most fun and creative things I’ve done in a good long while!

May I present to you…Rapunzel, Flynn Rider and Pascal from Tangled! 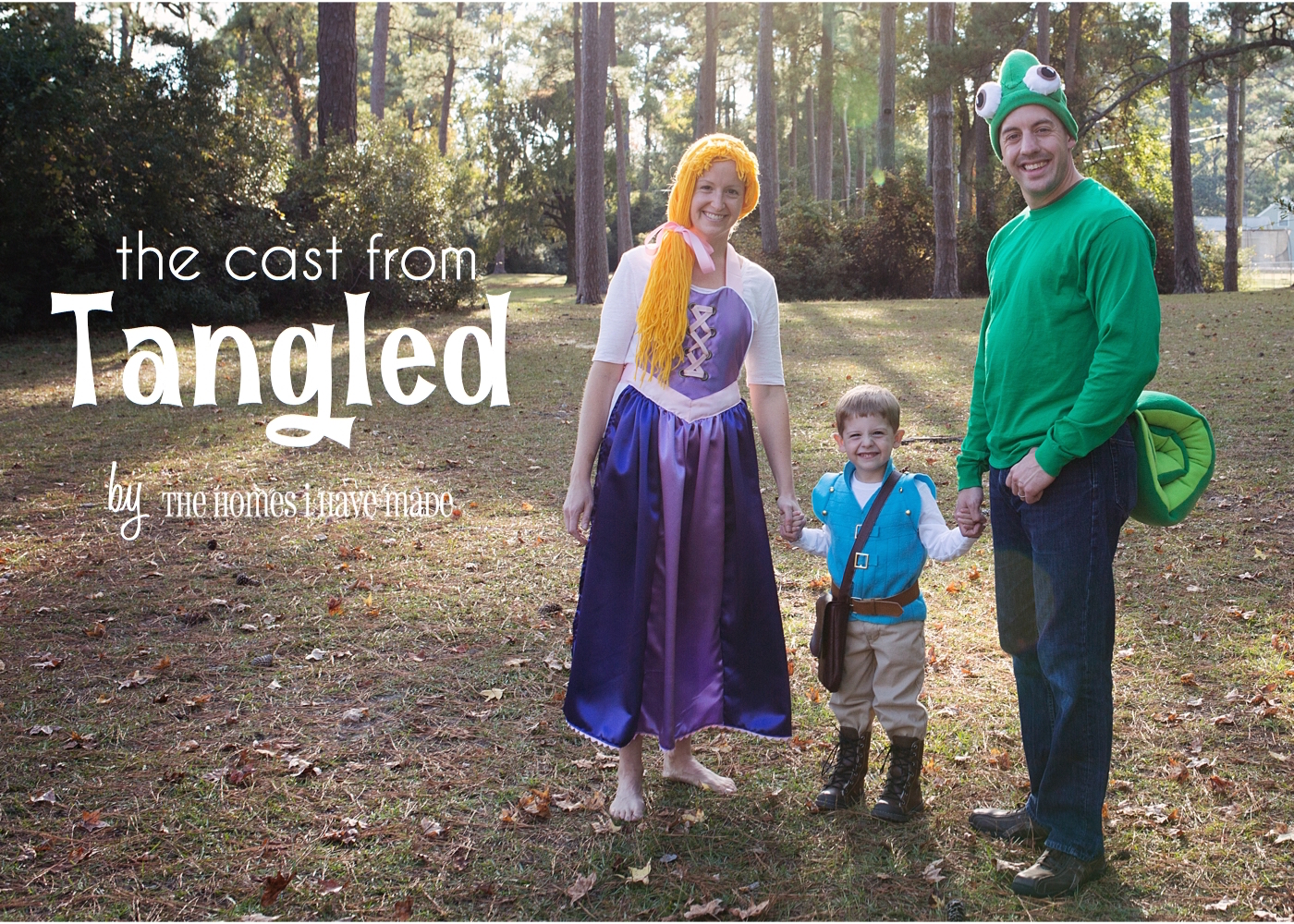 These costumes came about because my son is obsessed with Flynn Rider (and Tangled in general)! For weeks leading up to Halloween, he talked about being Flynn Rider, and he didn’t waver once. With clothing construction not really my thing, I kinda dreaded pulling this costume together. But with a HUGE dose of confidence from my big sister, I decided to go for it…and I am just so glad I did because this little guy LOVES this costume! 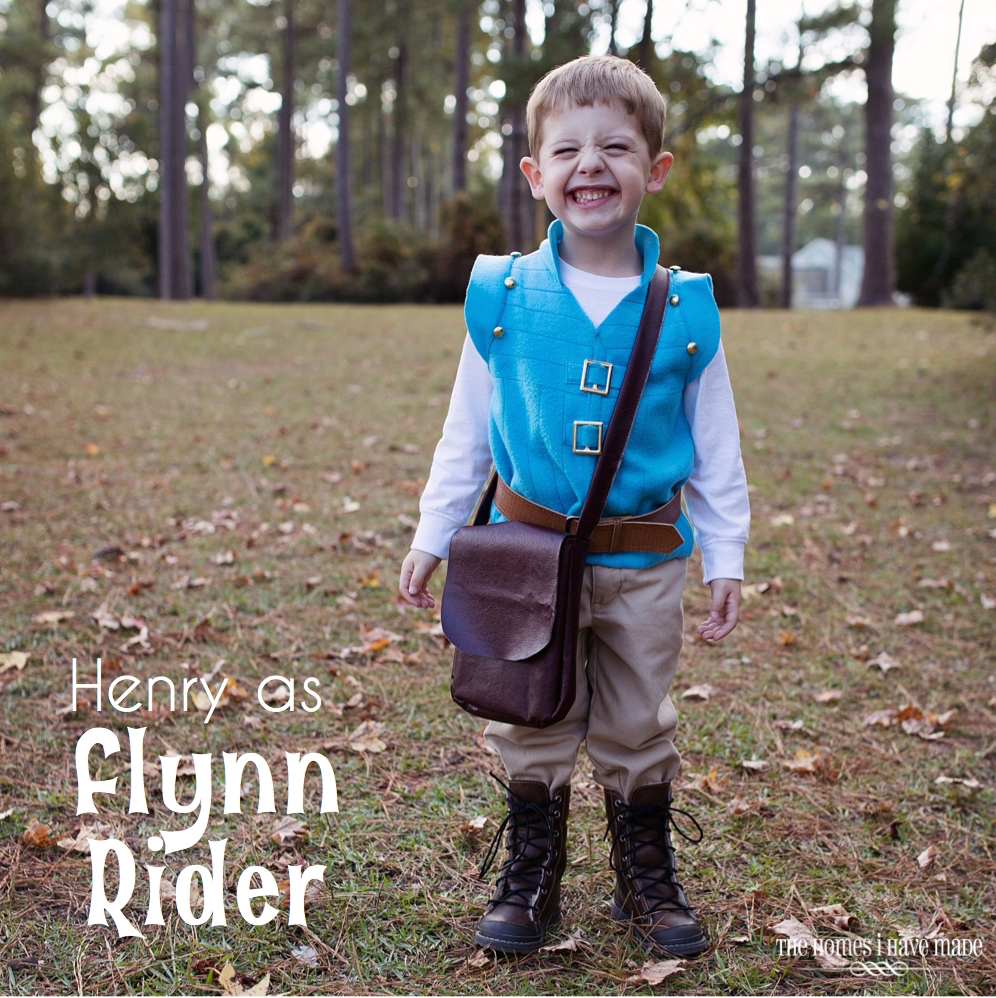 I somewhat made up all three of these costumes as I went along (with help from some online tutorials) late at night…so I didn’t take a ton of step-by-step photos. But I can tell you generally what I did and point you to some great resources to make your own versions!

I originally consulted this wonderful tutorial by the incredibly talented Ashley to make the Flynn Rider costume…but honestly, all the details scared me a way a bit. My sister had the awesome idea to make the top out of fleece, which doesn’t fray and doesn’t require lining. This turned out to be a brilliant solution. Not only is fleece toasty warm for cool Halloween nights, but it’s also super forgiving and comfy…so the fit was pretty easy to get right! (and he never wanted to take it off!)

I used a sweater vests of Henry’s for the “pattern.” It may look like a vest that opens/closes in the front, but it’s fake. The whole thing goes on over his head. I started by cutting out the front and back pieces, and then I created a middle closure detail by folding over a vertical inch in the center of the front and stitching it down. I then added all the stitched details (just straight line stitched vertically and on diagonal) on the front piece. Before sewing the front to the back, I sewed on strips of fleece with the buckles and tacked everything down. Again, the buckles and straps are just for looks! I then sewed the front of the vest to the back, and added the sleeves and neck using Ashley’s directions. Lastly, I added the cute little gold buttons with a needle and thread, which completely finished off the whole look!

The belt was just a kids’ belt (that was too long to wrap once and not long enough to wrap twice), so I trimmed about 10″ out of the center and top stitched the pieces back together! 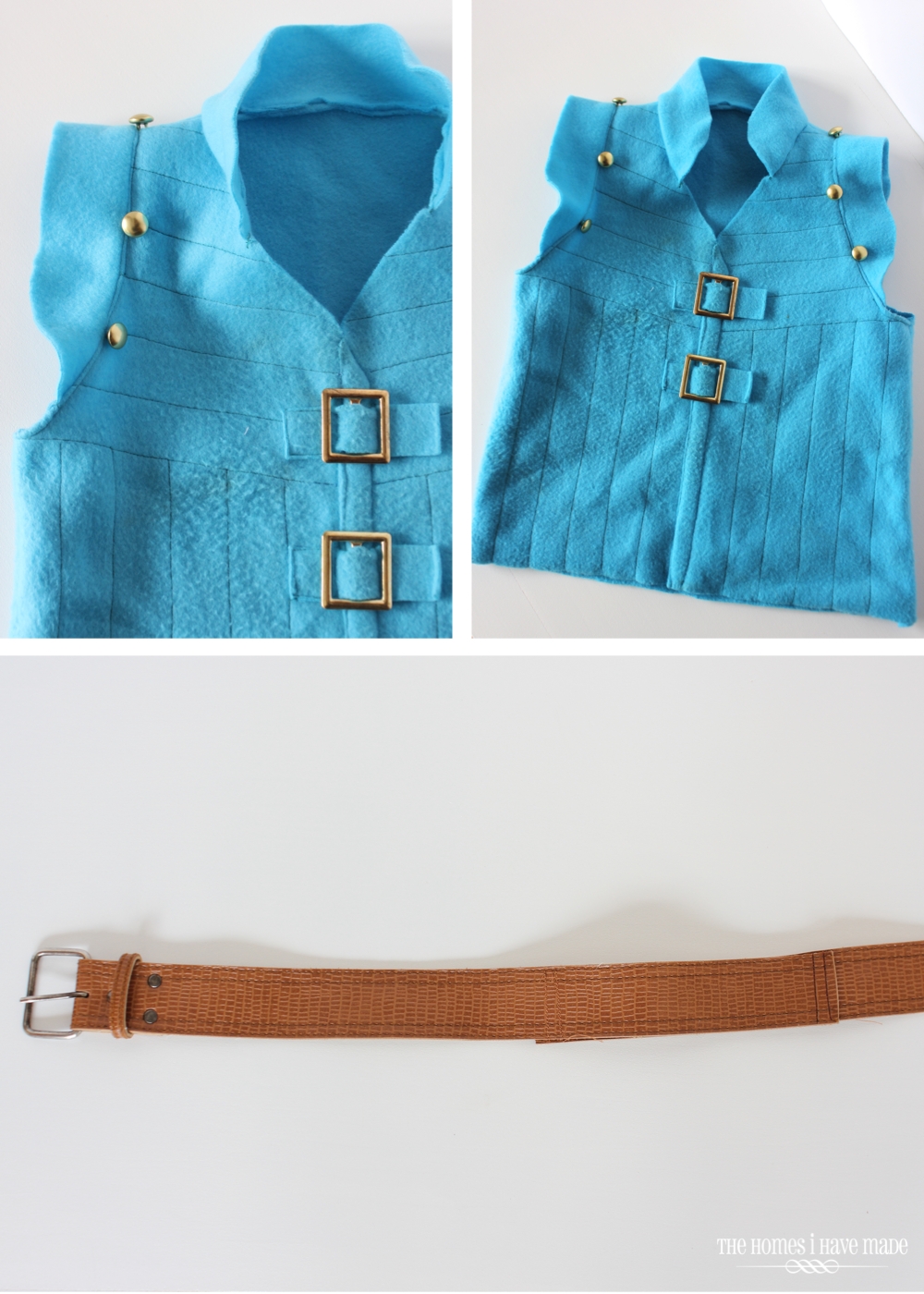 I made the ever-important satchel out of marine vinyl, which is another great no-fray option for Halloween costumes! I cut out a front and back rectangle (with rounded corners) and then attached them to each other with a 1″ strip in between. Once flipped right-side-out, I added the strap and the flap. The crown was a $1 purchase from Michaels!

The final details were the boots, khaki pants (both from a kids’ consignment shop) and long-sleeve white t-shirt. 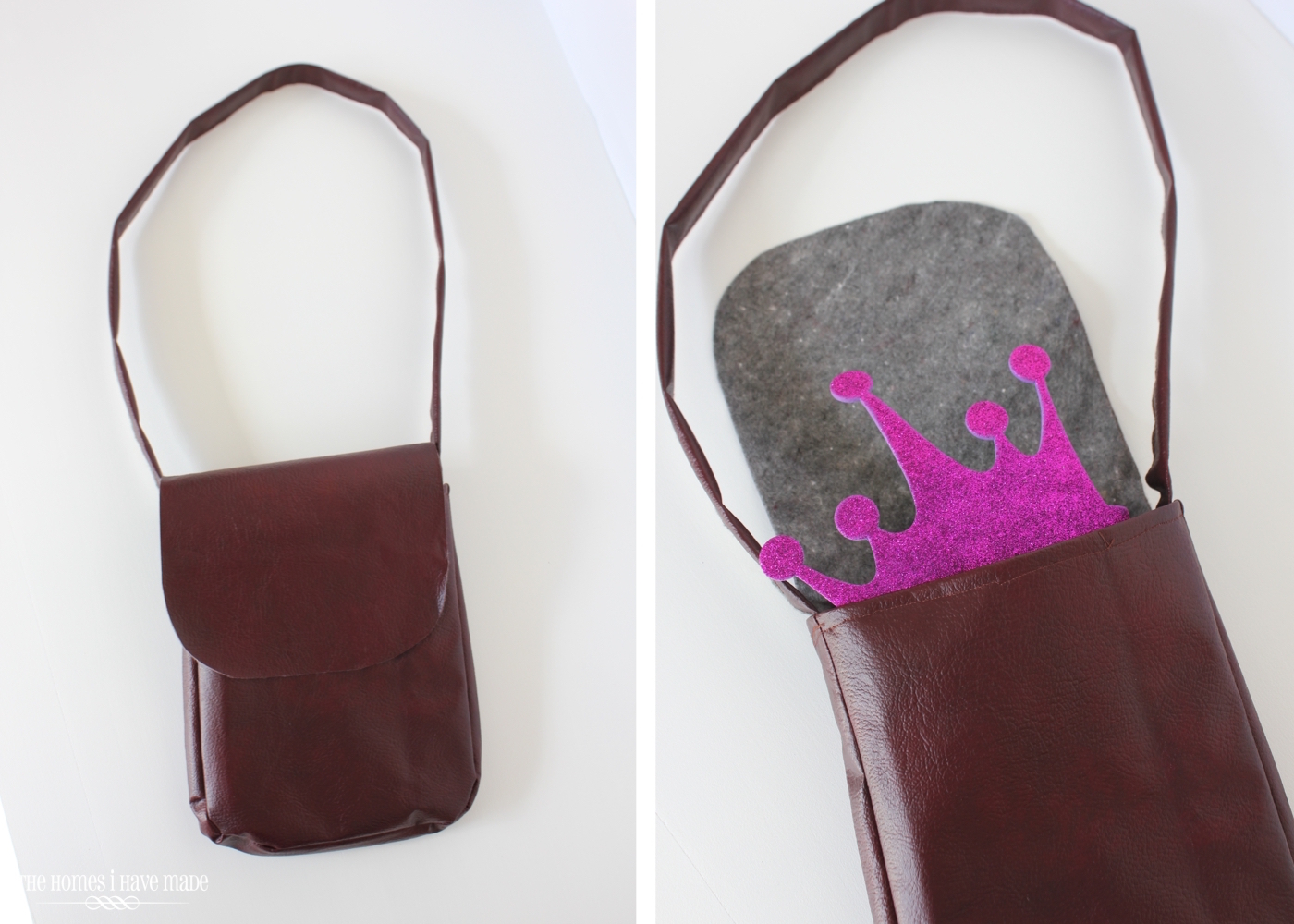 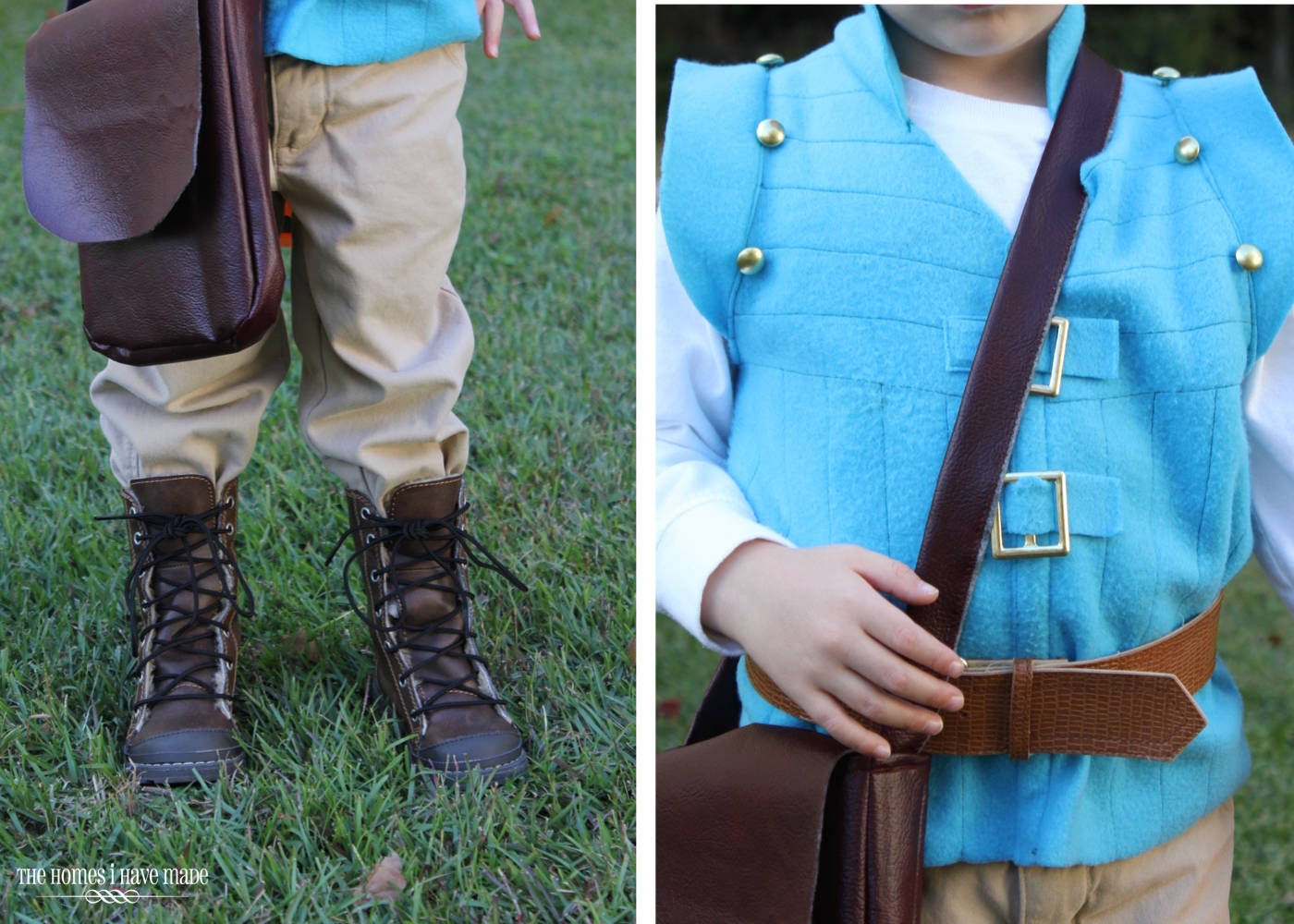 All together I had the cutest little Flynn Rider, and he LOVED running around the neighborhood in his costume! He absolutely stole my (Rapunzel’s) heart…and here he is below (right) showing off his “smolder”!!!! 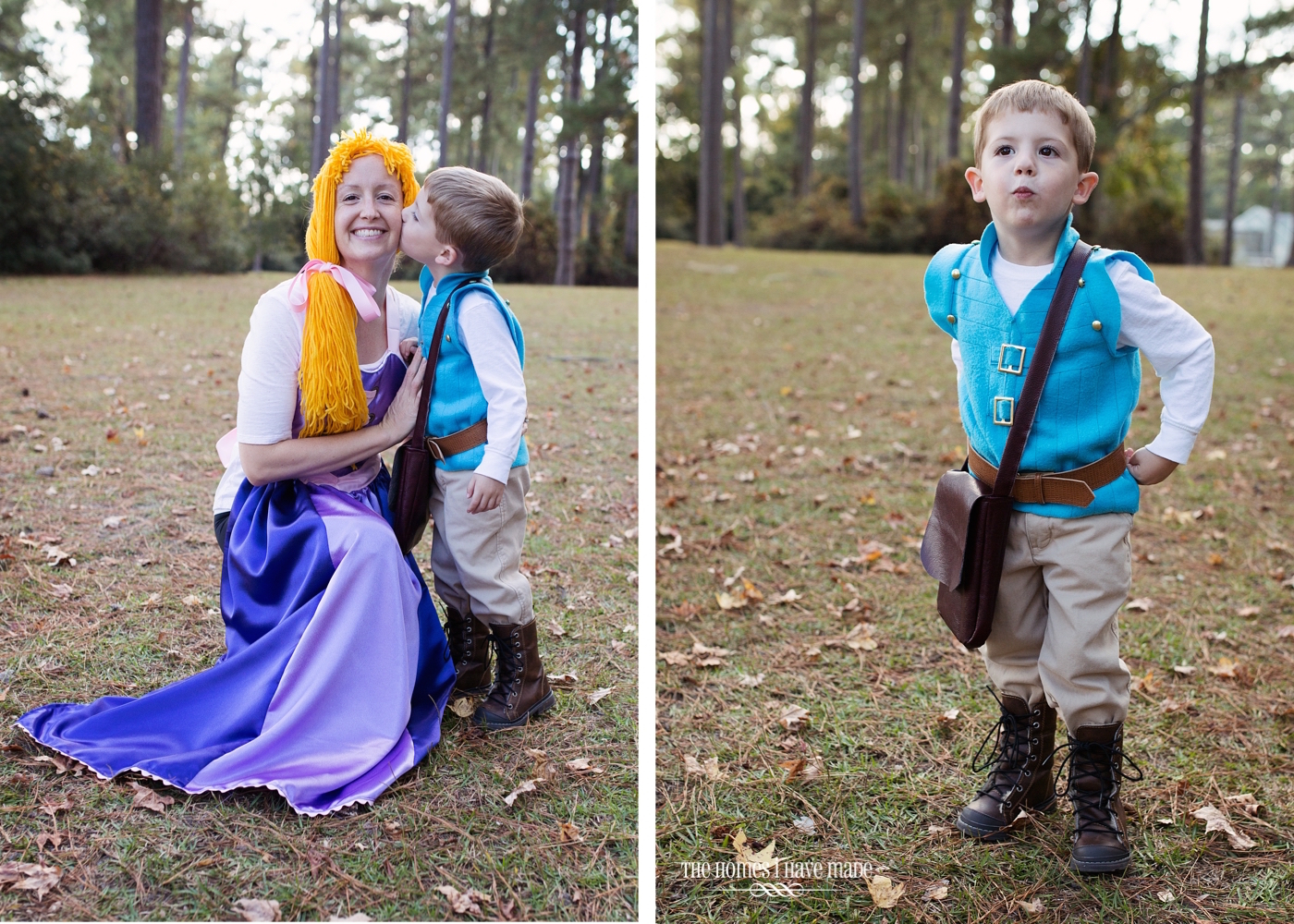 Speaking of Rapunzel, let me show you my dress! Oh my friends – I had SO much fun pulling this together. With every detail, I was texting my sister in excitement because I literally couldn’t believe how well it was turning out! I couldn’t wait to wear my costume on Halloween night…and honestly, I wish I had some other good reasons to pull it out and wear it again, but I truly felt like a princess! 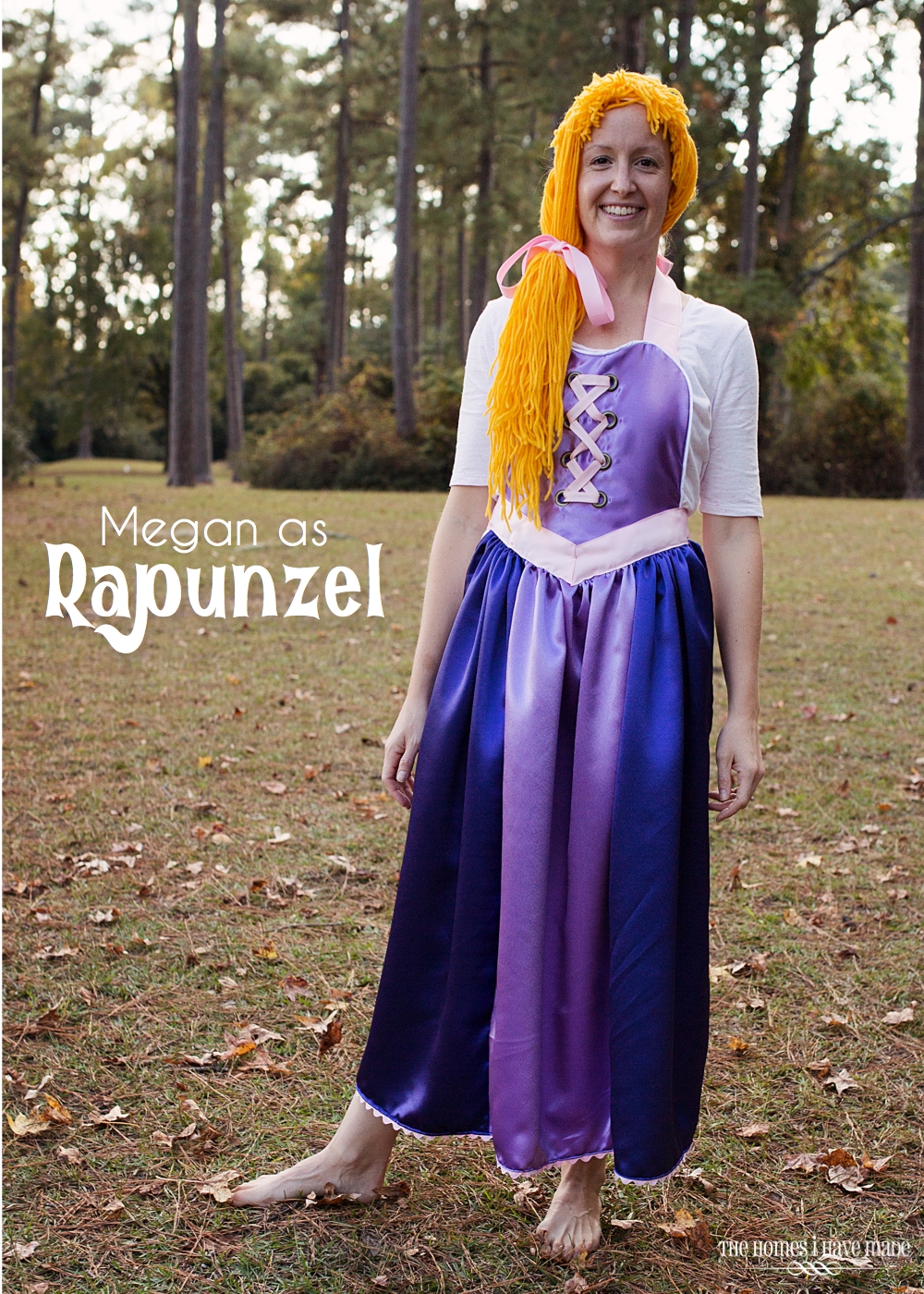 I come and go with the whole family costume thing…and this year, I wasn’t really game for a family costume EXCEPT that Flynn Rider is a somewhat random and non-descript character without Rapunzel for reference. Plus…Henry reeeeeeaaally wanted me to be Rapunzel, so I found myself making a Rapunzel costume. I really had no idea where to start when my sister suggested that instead of a dress, I make an apron. BRILLIANT! This way, I didn’t have to worry about fit or lining or sleeves. I could handle an apron! 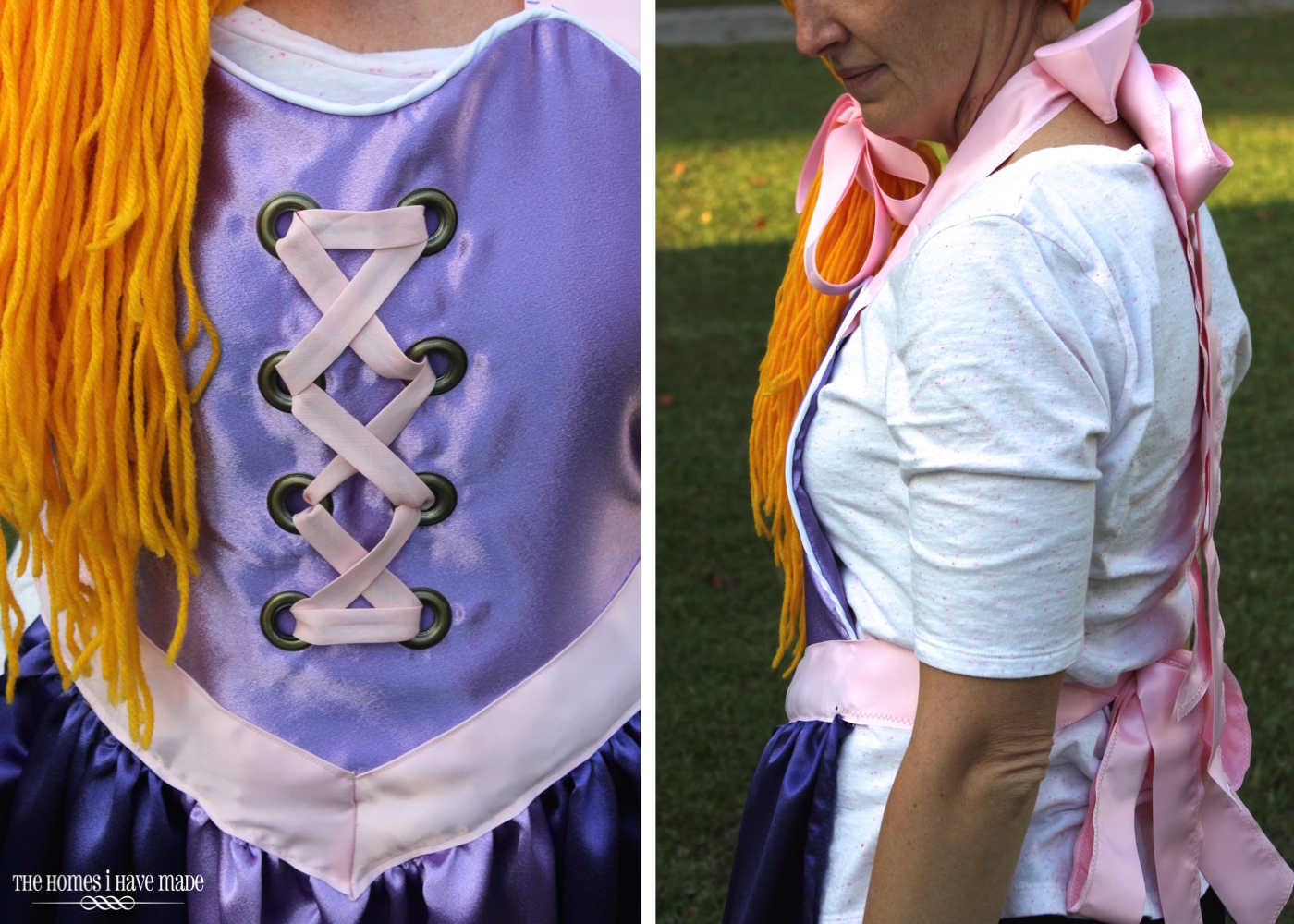 Little did I know how fun and gratifying this little project would be. I honestly made this up as I went along and couldn’t be more impressed with myself (if I do say so myself!) I bought a yard of crepe-backed satin in each of the two purples, as well as packages of pink 2″ satin quilt binding, pink double fold bias tape, pink large ric-rac, and white piping…(the grommets I already had at home!)

I cut out the bodice from the light purple using this apron pattern and then attached the white piping and straps (the 2″ satin quilt binding) using the pattern’s instructions. Before lining the bodice, I added grommets and “laces” (the double fold bias tape) sewing and connecting everything from behind.  I lined the bodice with more of the light purple satin and then top-stitched the 2″ satin quilt binding at the waste…leaving the opening of the quilt binding facing down. I then cut two 30″x18″ rectangles from the dark purple fabric and one rectangle from the light purple…I sewed the three panels together side-by-side, then gathered the three along the top (this was the first time I’ve ever gathered!!!!). I then just stuffed the skirt right into the opening of the 2″ stain quilt binding at the waste, and top-stitched to hold the skirt in place. I hemmed the skirt using some matching light-pink ric-rac. 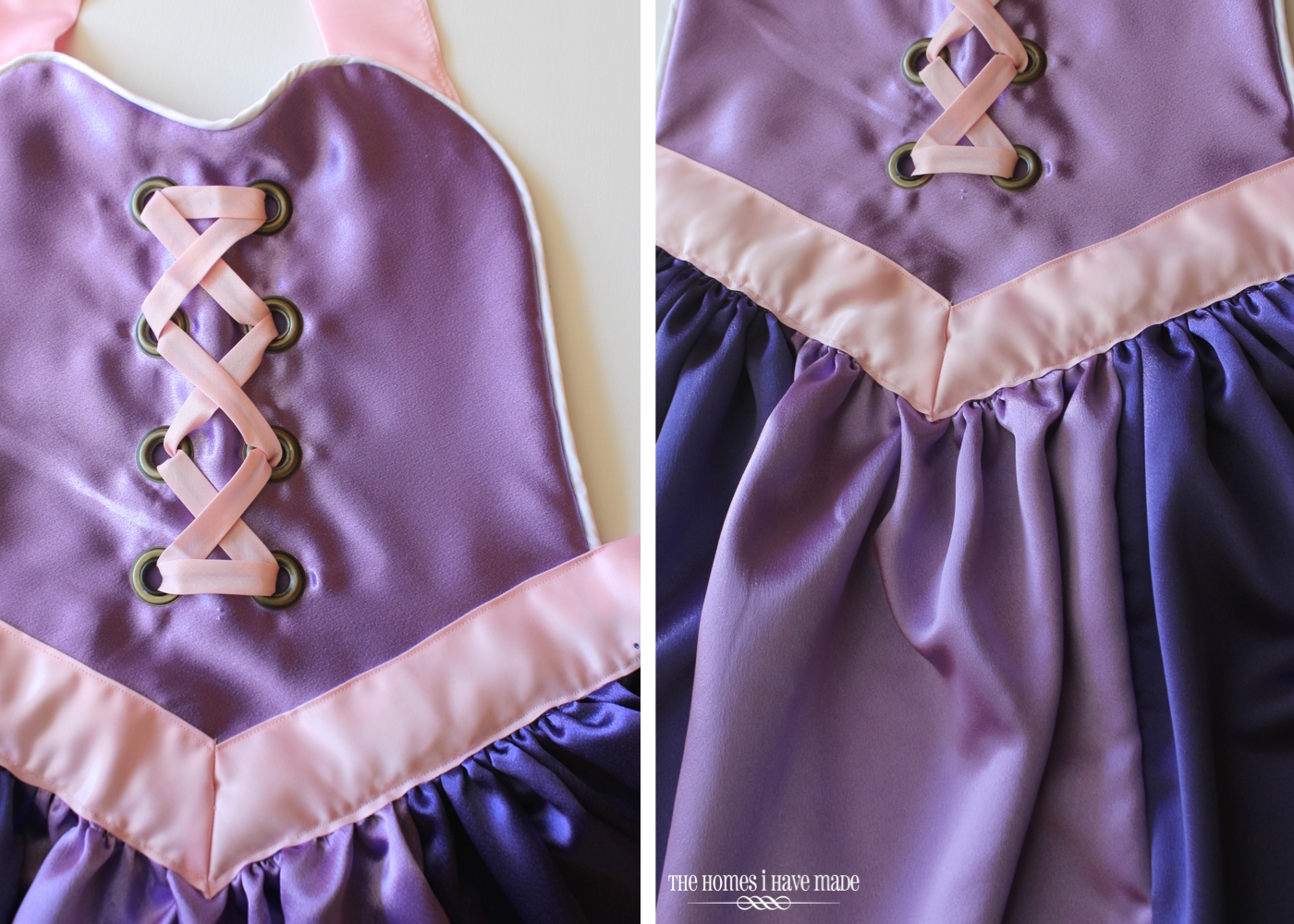 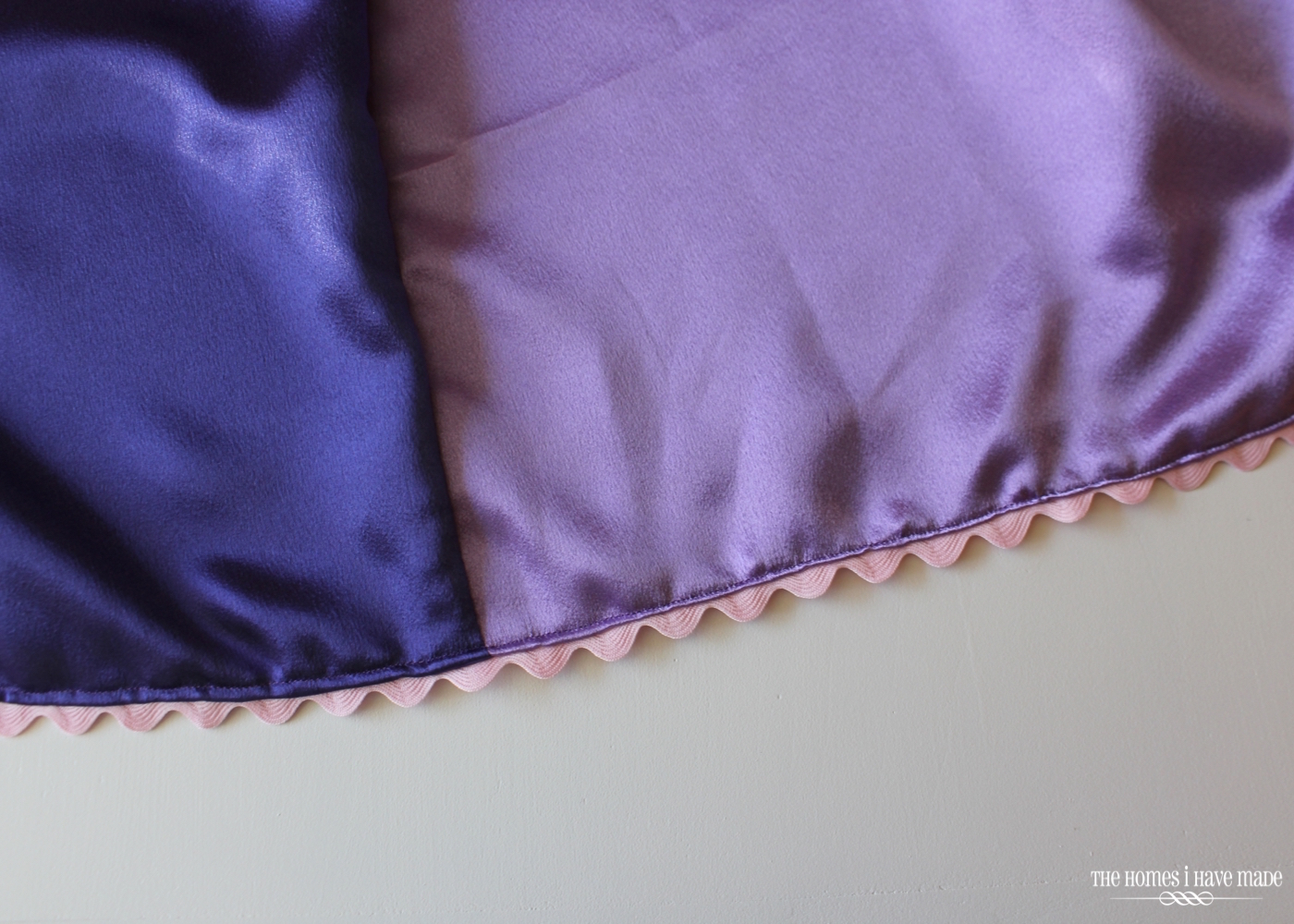 I honestly can’t beleive how good it turned out! The fancy fabric completely added to the flow and whimsy of the costume, so I am glad I went for it (rather than just using cotton or felt!). I’m sorry I don’t have a better tutorial for you. But honestly, I kinda want to make more…so if I do, I’ll take better pictures – promise!

And I know you’re probably dying to know about the wig. Would you believe it if I told you that wig was from when I was Rainbow Bright in Kindergarten about 29 years ago?!?!?! My mom made me the most spectacular Rainbow Bright costume, complete with a bright yellow yarn wig. This summer, during the great house clean out, I found and kept the costume because it’s such a special memory of mine. When I was debating what to do for Rapunzel’s hair, I went and dug it out and couldn’t believe how well it completed the costume. I just know my mom would be so tickled! Now that’s re-purposing! 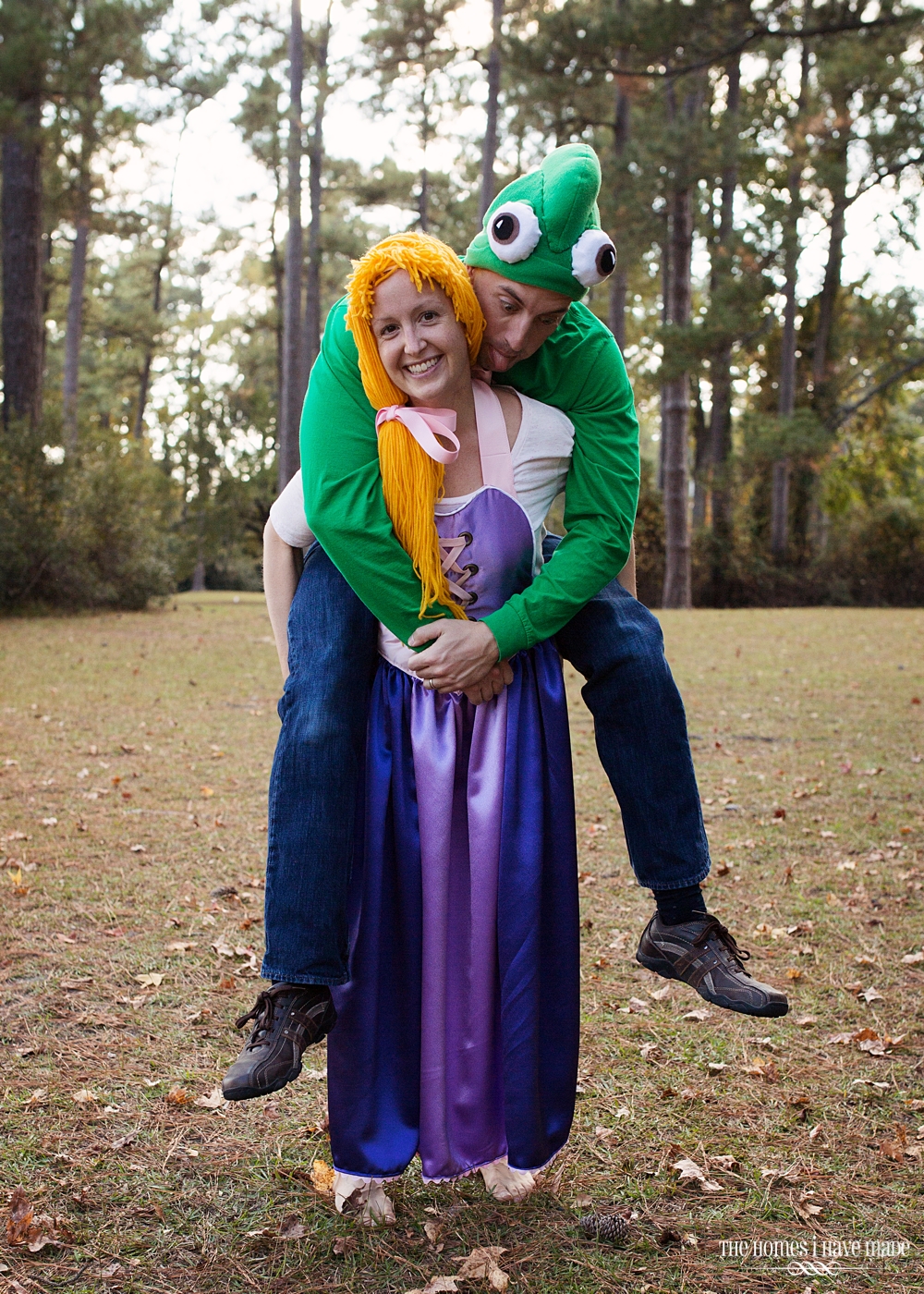 Last but not least, Greg got to be Pascal. Yes, Henry did the casting and was adamant about Daddy being Pascal. Greg is such a good sport…and it really did complete our ensemble! 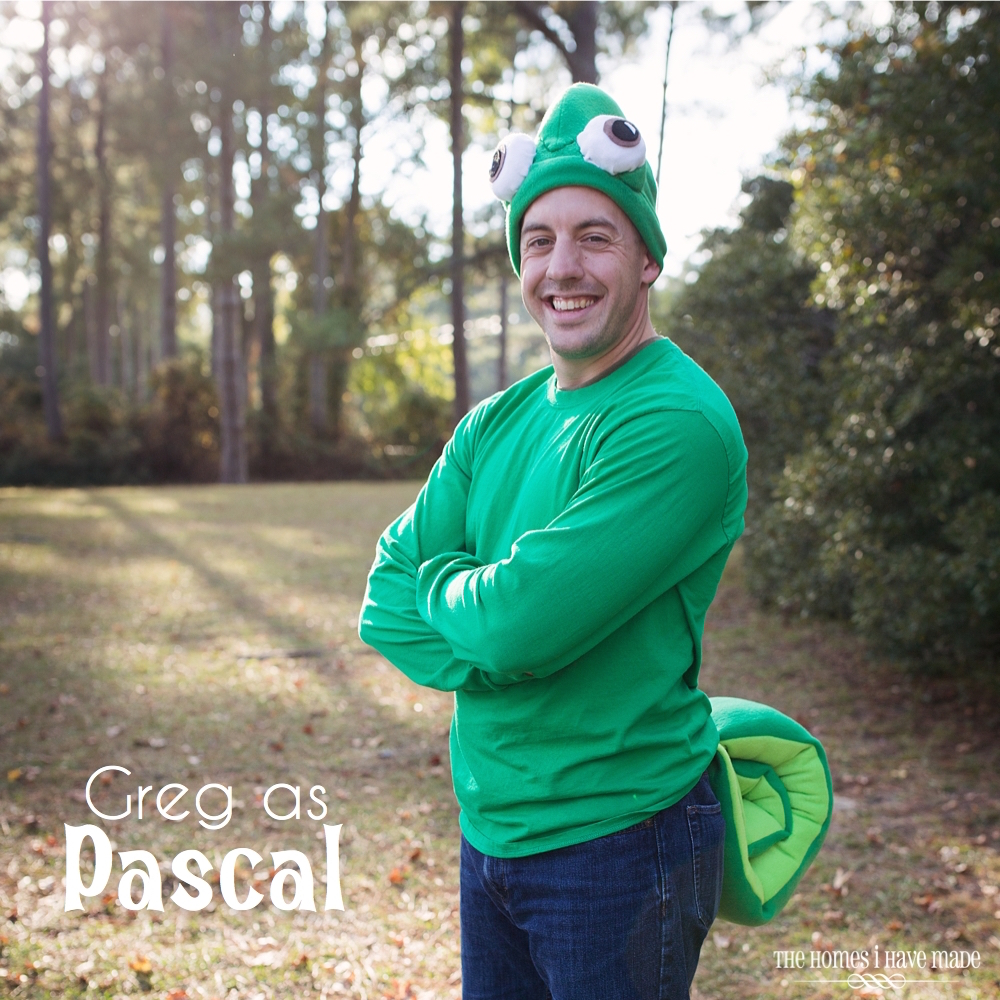 I pretty much can’t take any credit for these two ideas. Thank goodness Ashley is so creative and talented or I would have had no idea how to pull off a chameleon costume. Greg didn’t need a full-body costume, so we went for just the hat and tail. Put together with a long-sleeve green t-shirt (a total last minute Target score!), it really could not have been more perfect. 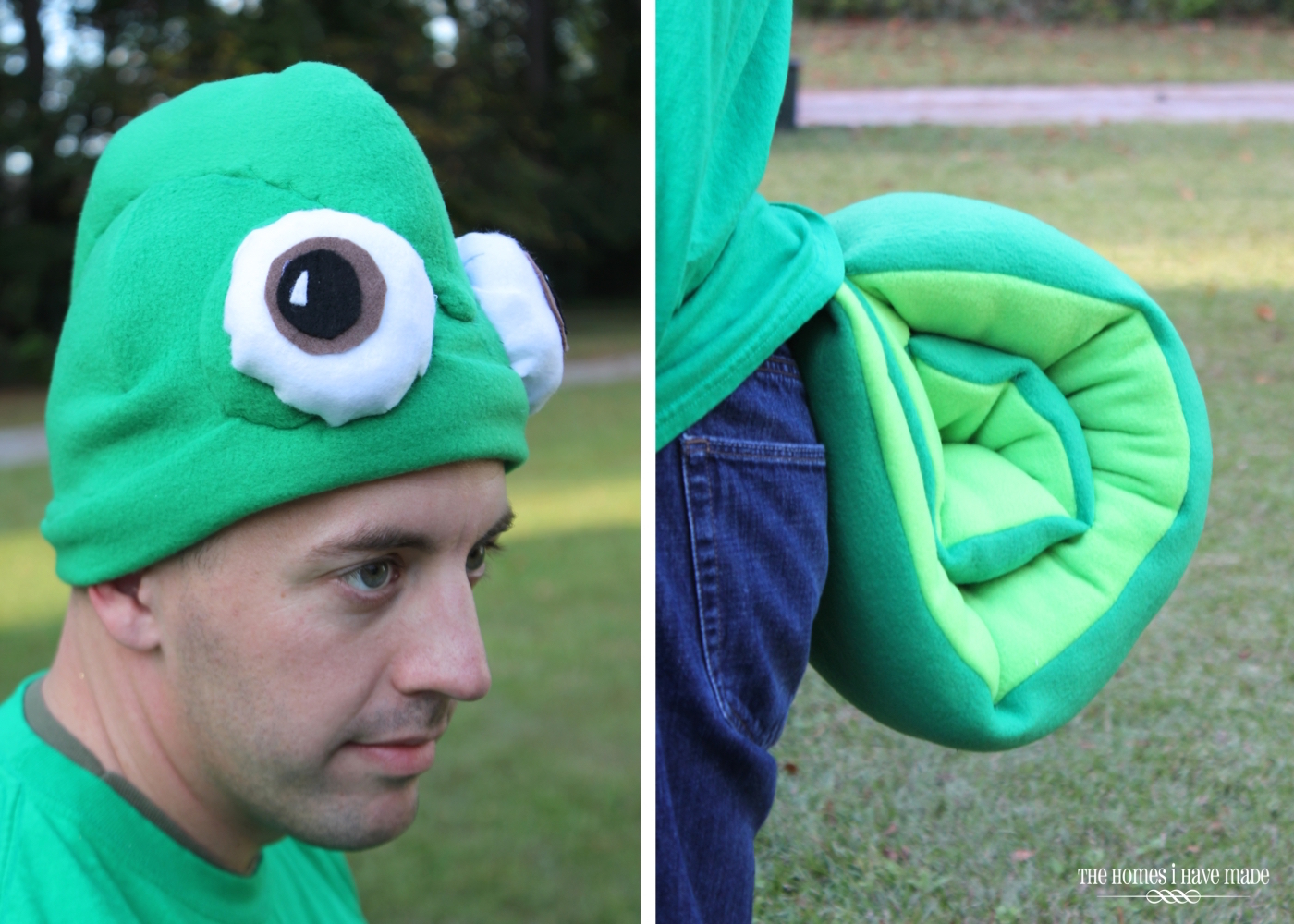 I did adapt the tail a bit from Ashley’s original design. For one I made it two-tone. Also, I folded over the top and sewed it into a tube for Greg’s belt to go through. This worked out so perfectly, and it eliminated the problem of “how do we attach the tail?” 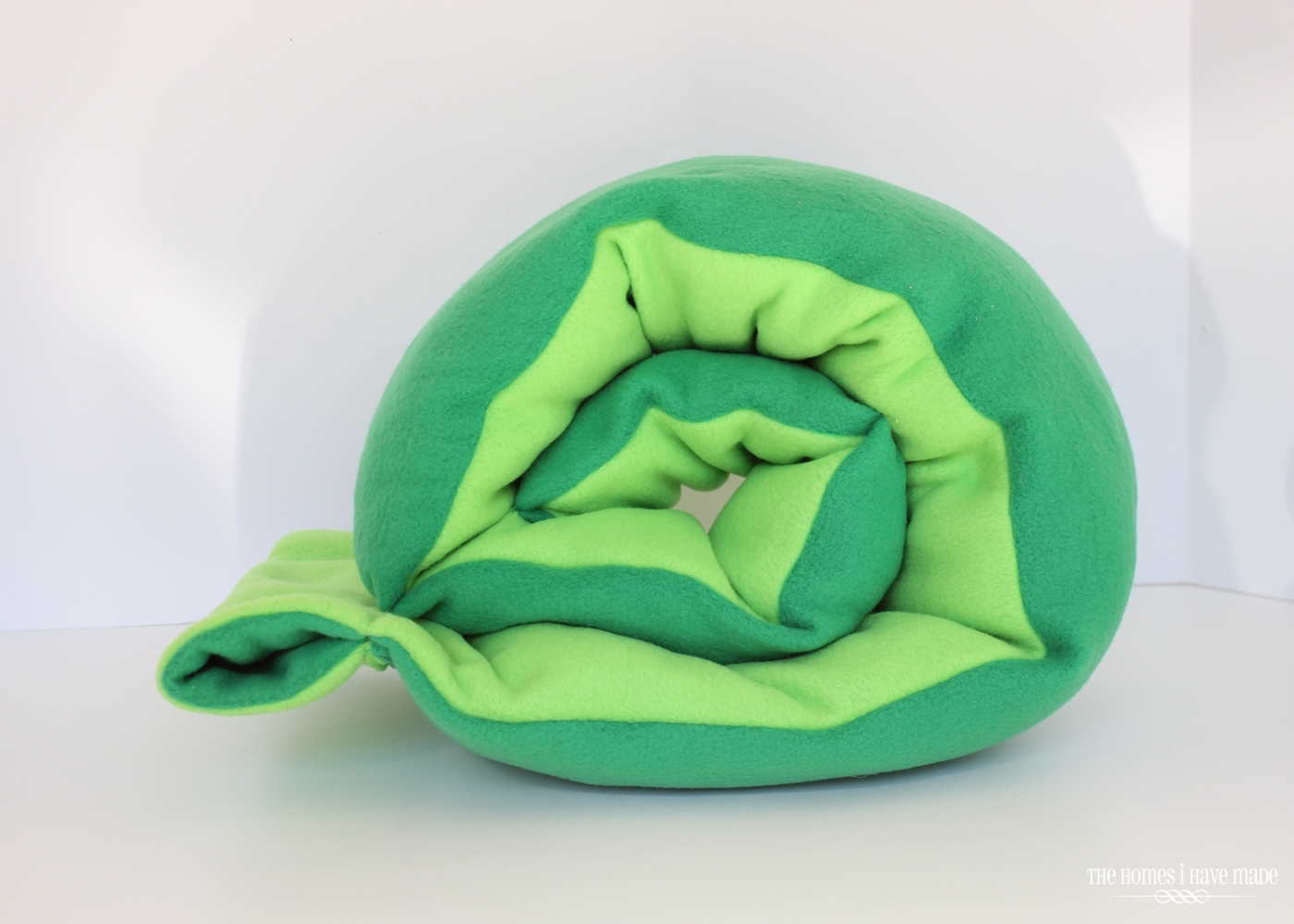 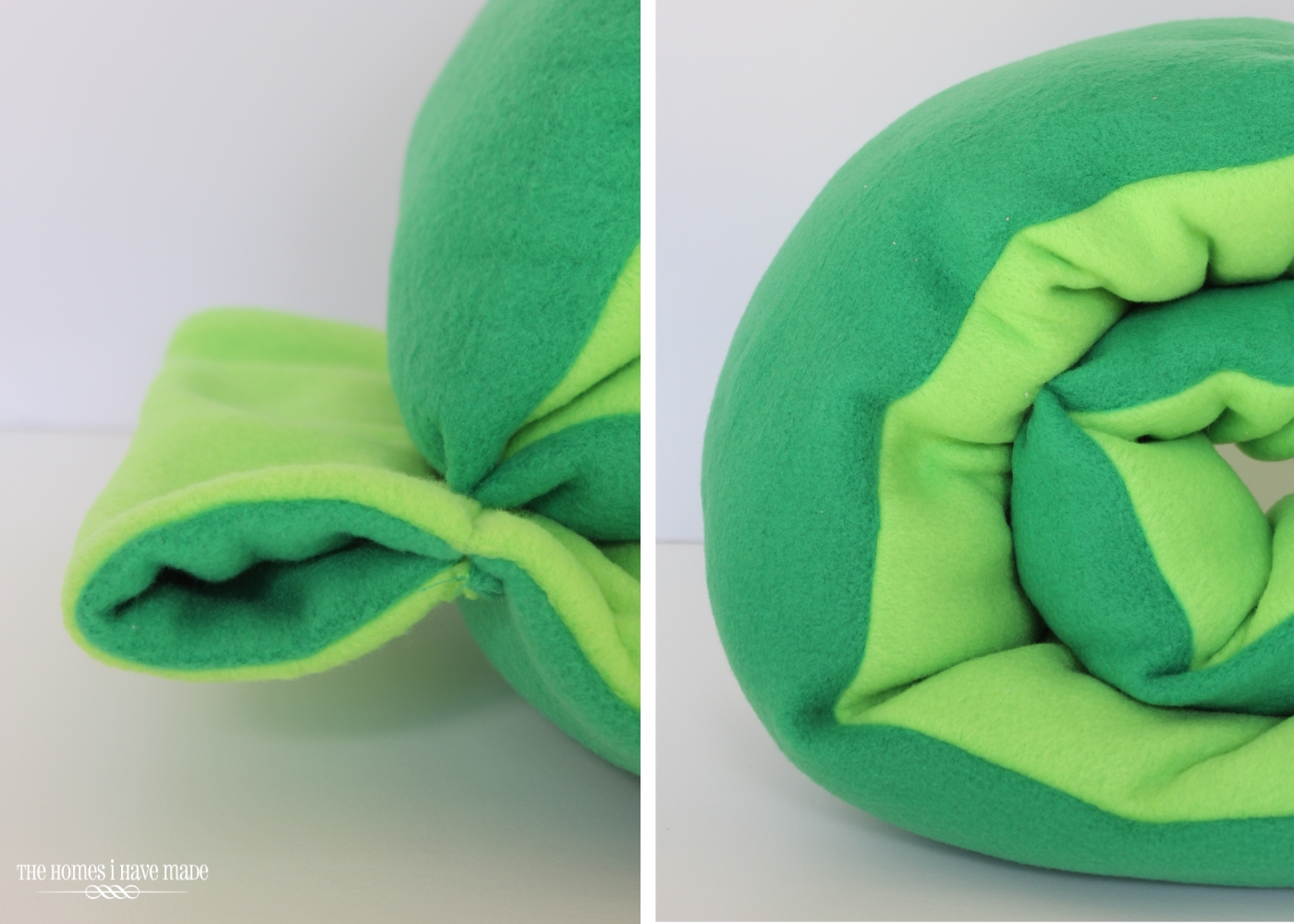 The hat was pretty much an exact replica from Ashley’s tutorial! 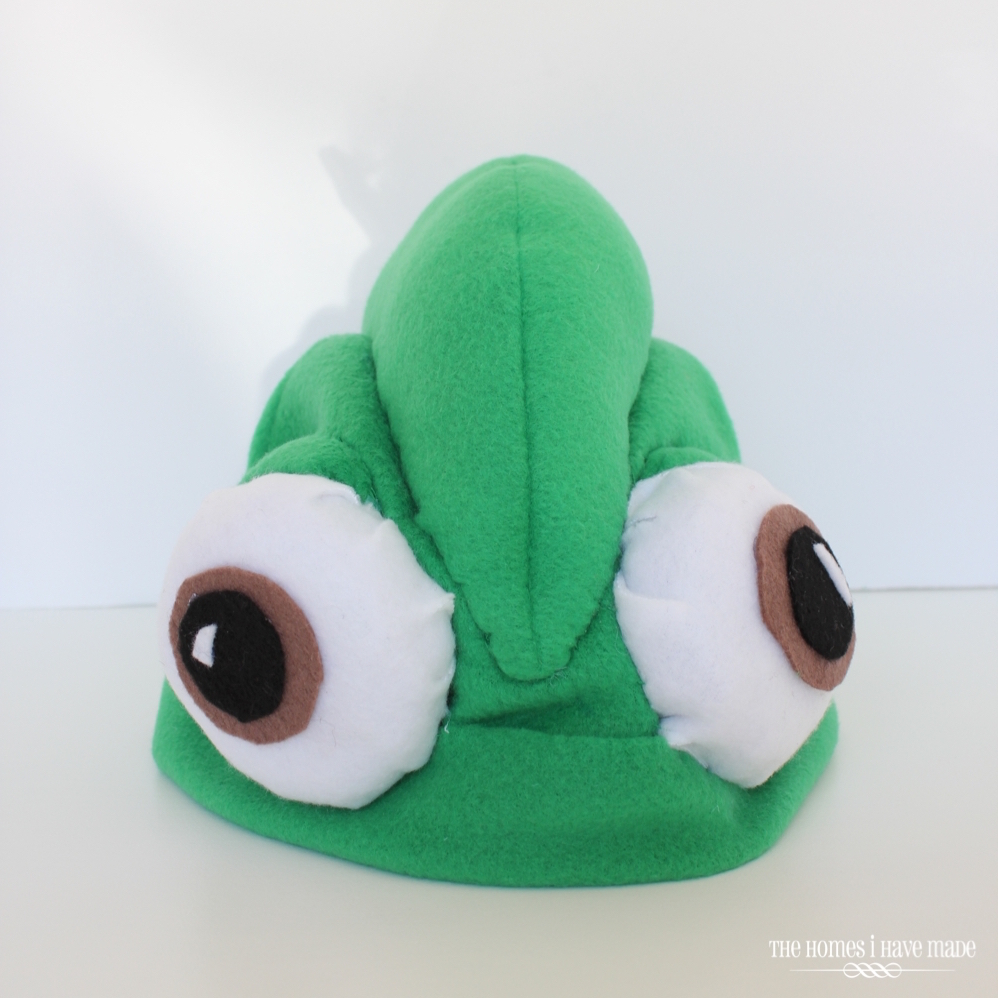 There was something about pulling these costumes together that lit a new creative fire in me. Not sure if it’s because they are so far out of  my norm or because I got to be creative in an entirely new way, but making these three costumes was the most fun I’ve had at my sewing machine in a very long time. AND, seeing Henry’s excitement at my re-creation of his favorite characters showed me how fun it really can be to get into the Halloween spirit! 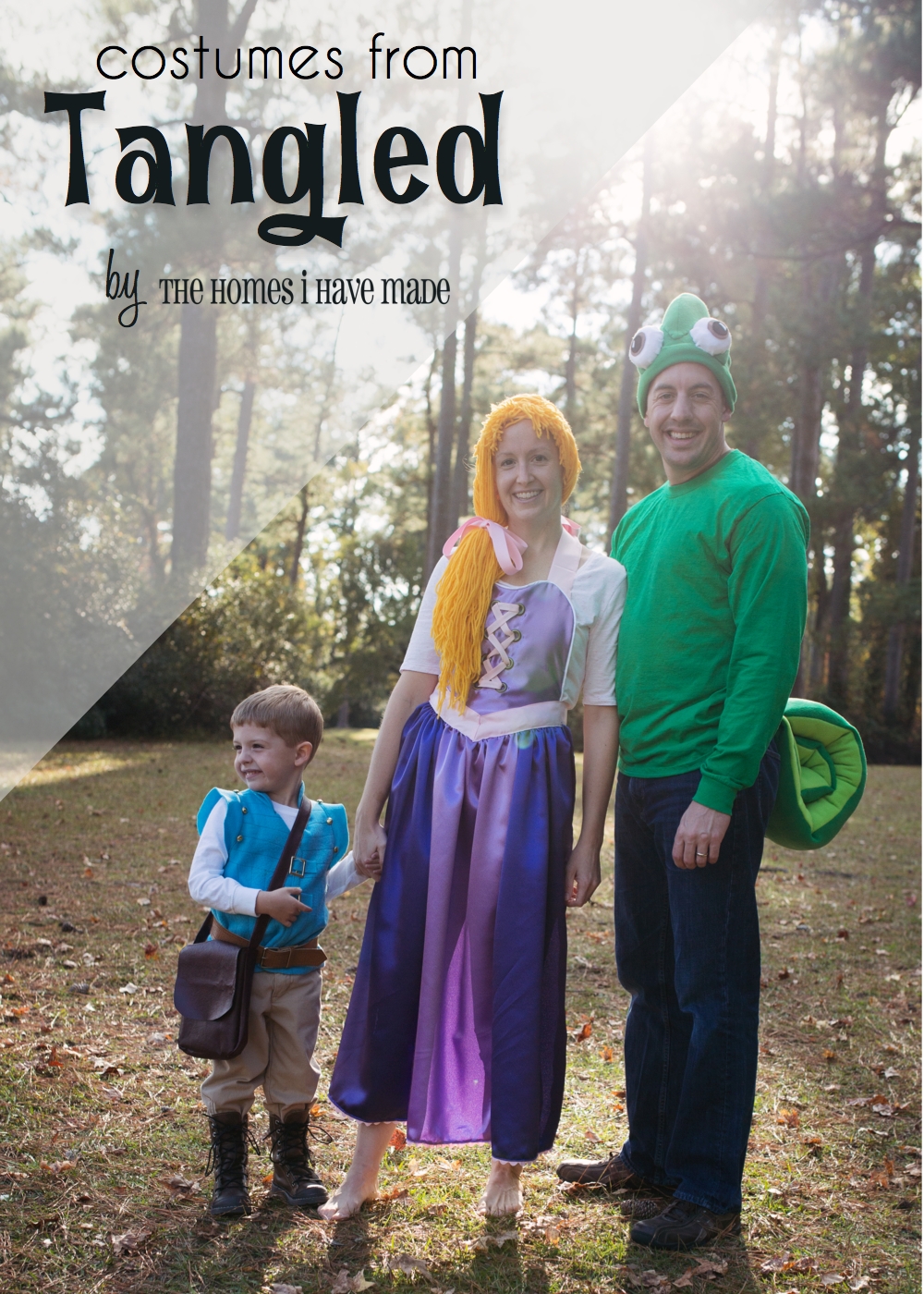 After weeks of excitement leading up to Halloween, I was pretty sad to put these costumes away this weekend. Just a few hours on Halloween night didn’t feel like enough time in these fun outfits. Good thing Henry loves to play dress-up…I just might get to be Rapunzel again soon! 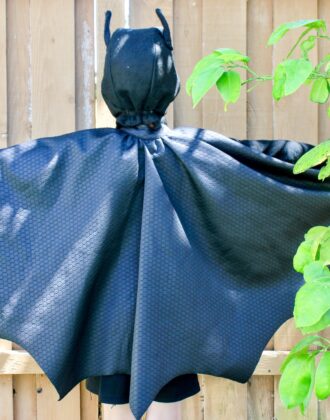 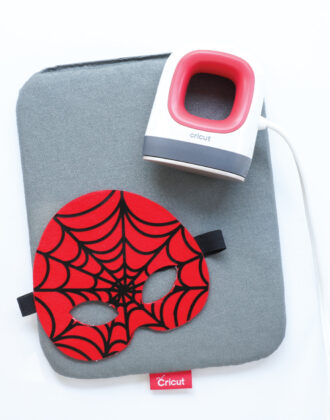 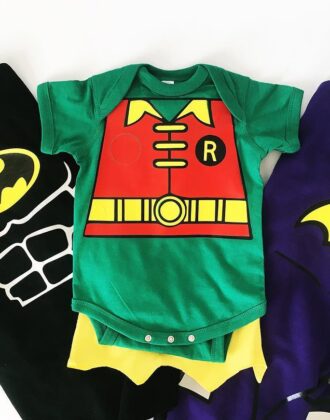 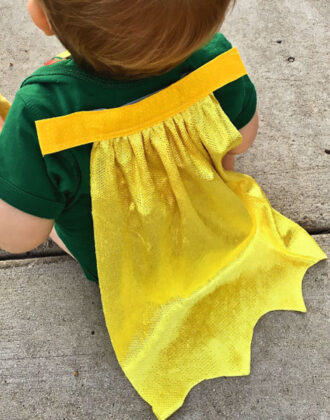 How to Make a Cape for a Baby Onesie