posted by Megan on June 17, 2013 This post may contain affiliate links.

A few weeks ago, I received a comment from a reader asking if I ever used anything the same from house to house and move to move. I think the comment was intended in fun (because it ended in “ha ha ha,”) but I can’t really blame her for wondering. If you glance through my Project Gallery and Home Tour pages, it appears as though I don’t…because, so far, I’ve re-decorated each time we’ve moved!! Admittedly, we have updated A LOT of things in our house this time around (some were needed and others because my tastes have changed); and sometimes things from a previous house just don’t work in a new house. But in reality, I try very, very hard to use, re-use, and repurpose items whenever I can. One of the best examples of this is how I have continually used the same frames, move after move, to achieve different looks and functions in each house! 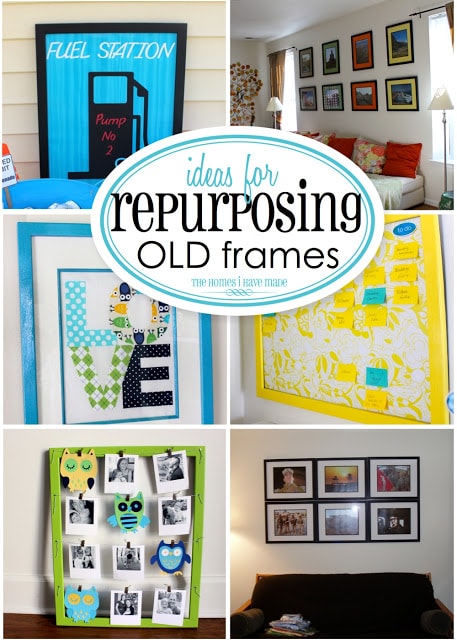 I bought these frames seven years ago from Michaels (well, technically my Mom and Dad picked them up, packaged and mailed them to me – we were living in Okinawa at the time!). They are 16″x20″ frames but are matted to 11″x14.” My intent for these frames was a simple gallery wall in my husband’s office/den/man cave. To surprise him upon his return home from deployment, I framed some images from his time in Iraq and hung them in a simple arrangement above his couch. 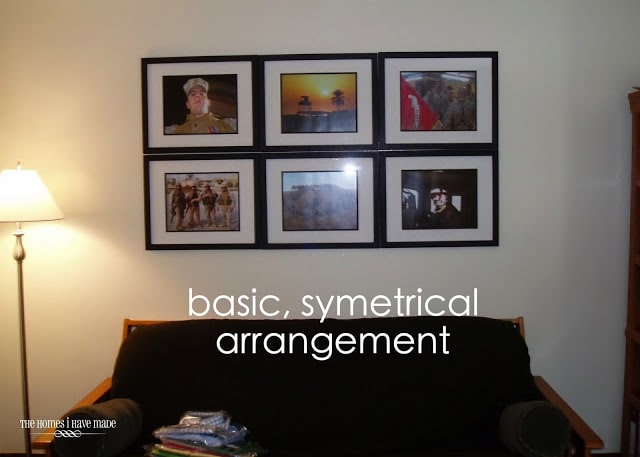 When we moved to San Diego, we had very high ceilings and a lot of space to fill above our couch, so we re-used the frames but gave them an entirely different look. First, we swapped out Greg’s military photos for family photos and images from our travels. We then used over-sized colored paper from the craft store to create large colored mats that coordinated with our pillow fabrics. Lastly, we put more space between the frames (to fill the wall), and hung them in an alternating landscape/portrait arrangement. 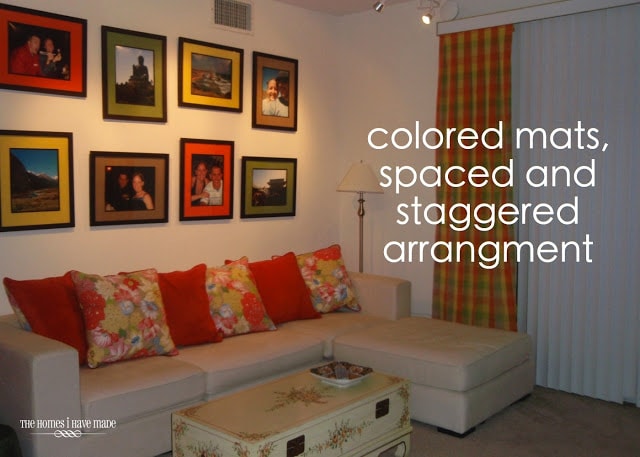 After three years in San Diego, we moved to Virginia for just one short year. We knew we were only go to be in that house for a short time, so we limited the updates we made for that home. To give the frames a slightly fresher look, we kept the same mats but swapped out the pictures for scenic-only shots. All these images were from places we had recently traveled. Also, instead of hanging them in the same arrangement above the couch, we grouped the frames by mat color, all the portrait-style images on top and the landscape-style images on bottom. This had a much cleaner feel to me – I still love this arrangement (and still love this room)! 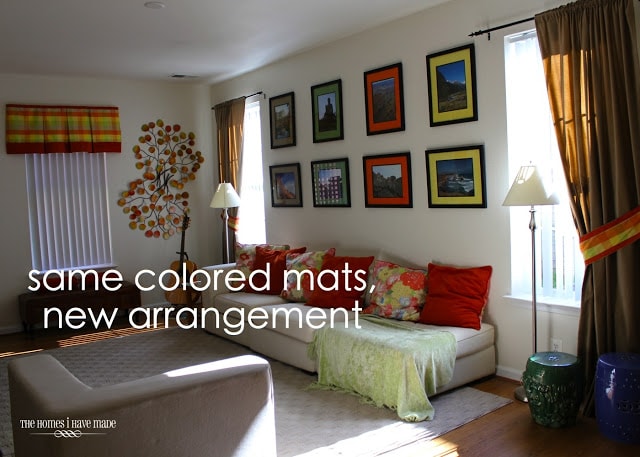 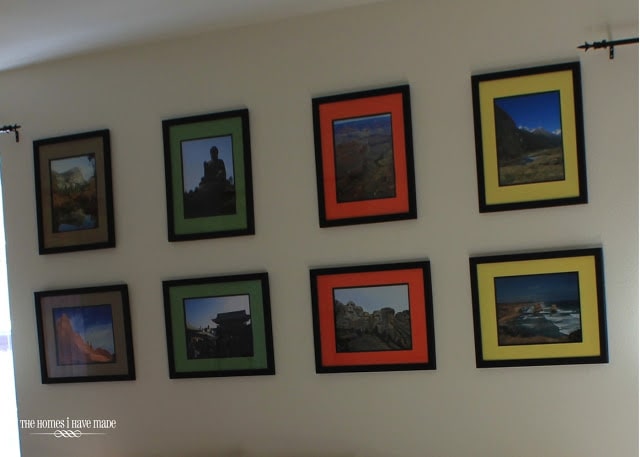 When we moved into our current house, we decided that we were no longer going to display frames above the couch. One reason is because we were tired of this look after four years. Another reason is that we now have a window above our couch, so the same arrangement would be impossible! However, these eight frames have made various appearances here on the blog as they’ve been updated for this house! The most recent was just last week! Tired of the colored mats and dark frames, all three pieces to these frames (frames, mats, plastic mat inserts) were given fresh coats of glossy white paint and loaded with vibrant (recent) family photos! 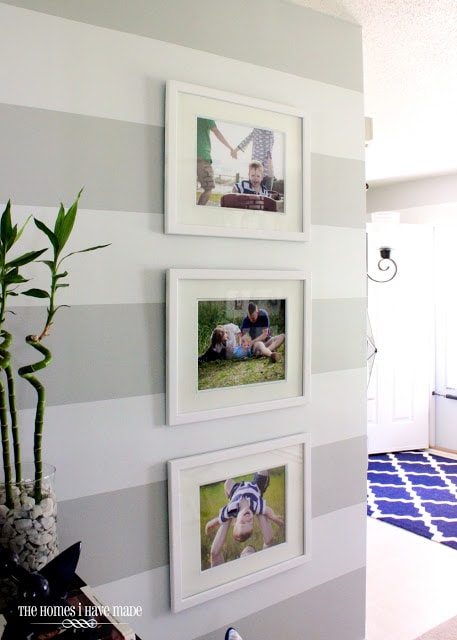 In addition to using these frames to display photos (as I’ve done almost exclusively before now), I have recently taken to dismantling the frames and painting and repurposing them to give them new life! 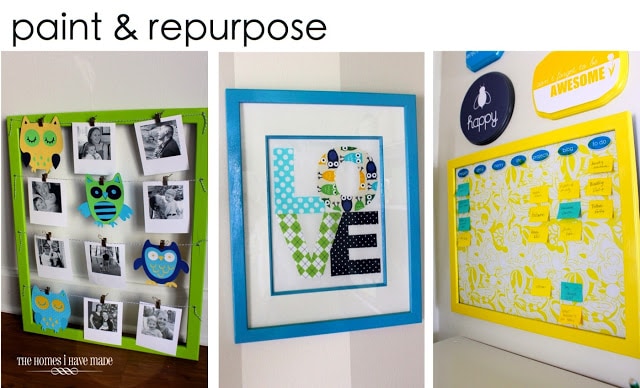 I removed the glass, mats, and cardboard backing from one to make an Easy Swap “Polaroid” Gallery for Henry’s room – you can read the full tutorial HERE!

Also for Henry’s room, the frame and mat insert to one frame were spray painted bright turquoise to hold a fabric scrap word art! See the tutorial HERE!

In our new family command center, the glass was covered in flowered contact paper and the frame was painted a sunny yellow to serve as our Sticky Note Reminder Board! 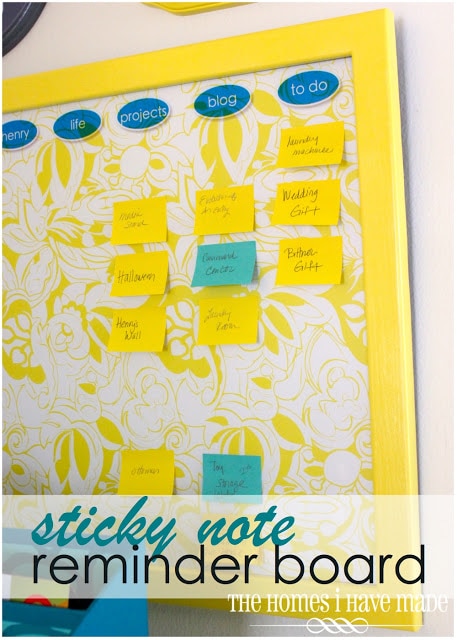 I have also put these frames to use for holiday and party decor! 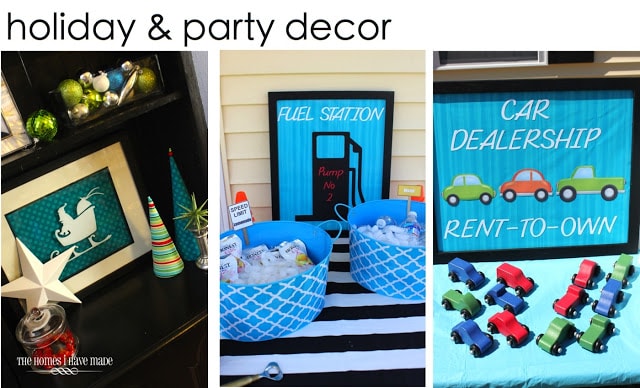 For our Holiday Home Tour, I kept the frame untouched, but loaded it with graphic fabric and a vinyl Santa cutout to create simple holiday art! 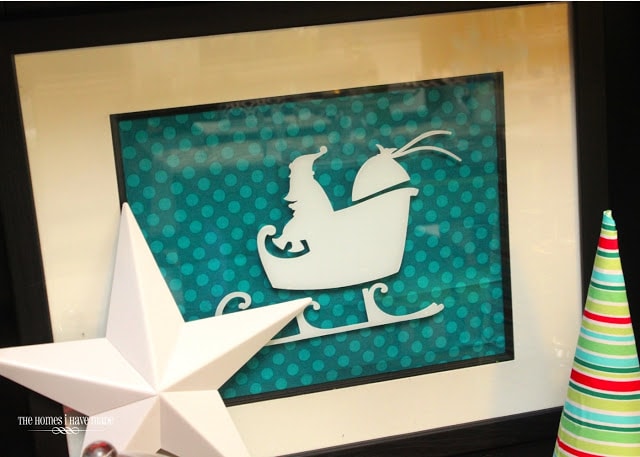 And for Henry’s On-the-Go Birthday party, the frames were used as signs for different party stations! 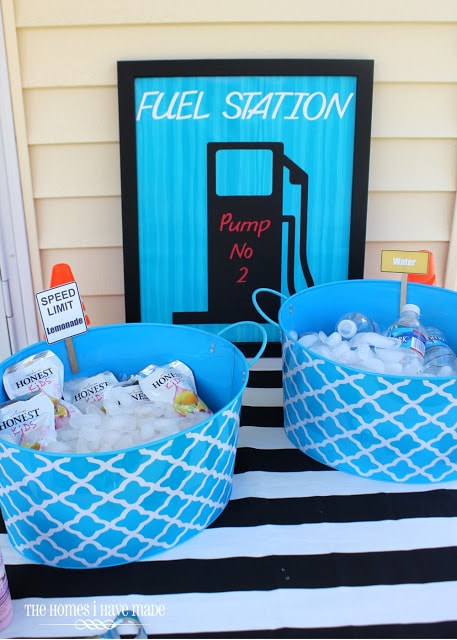 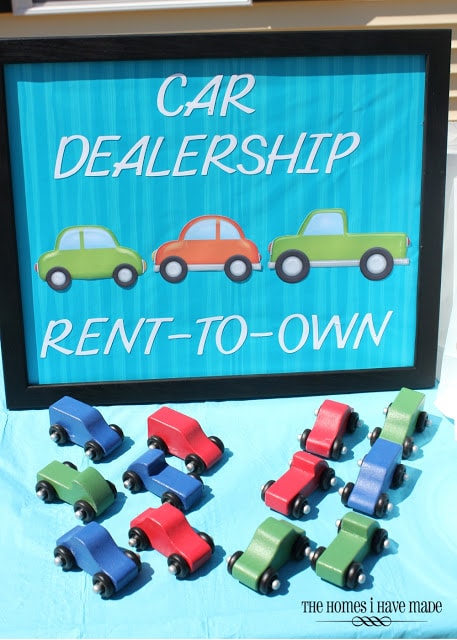 It’s kind of fun to look back at these simple eight frames and see how they’ve been adapted, updated and put to work in each house we’ve lived in. I still have two frames that haven’t been updated and given a permanent home in this house, so there still may be more in store for these guys. We’ll see what else I can come up with – we’re running out of wall space 😉

Did you enjoy the walk down picture-frame-memeory lane with me?? I hope you got some ideas on how to use some old frames you may have laying around your house!

See You Soon!
Megan
« Previous PostQuick Update in the Living Room
Next Post » If At First You Don’t Succeed, Try Try Again – My White Ottoman Lesson