posted by Megan on July 29, 2013 This post may contain affiliate links.

Hey Everyone! I hope you all had a fantastic weekend. There’s lots and lots going on around these parts – so many fun things to show you. I’ve been super hard at work getting the Office/Craft Room pulled together…just wait until you see my latest addition! Before I catch you up on those details though, I wanted to show you three quick stenciling projects that anyone can do to add a fun modern-typographical-punch to any space in your house! 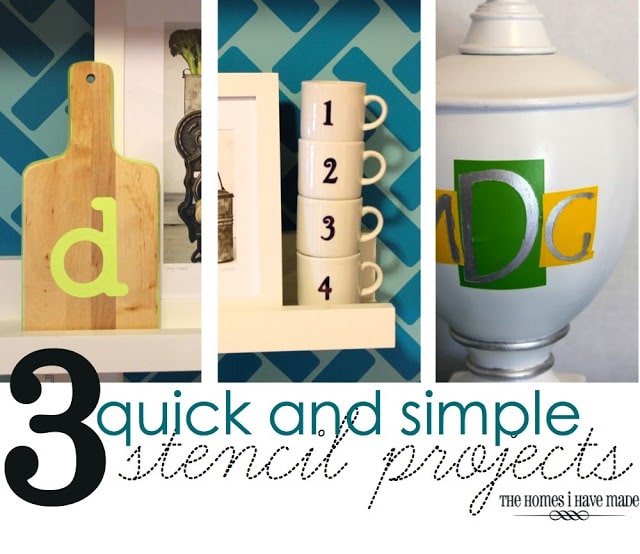 You saw a preview of two of these projects last week when I showed you the new shelf in our kitchen! Today, I wanted to show you just how easy they were to pull together! First up, this monogrammed cutting board! 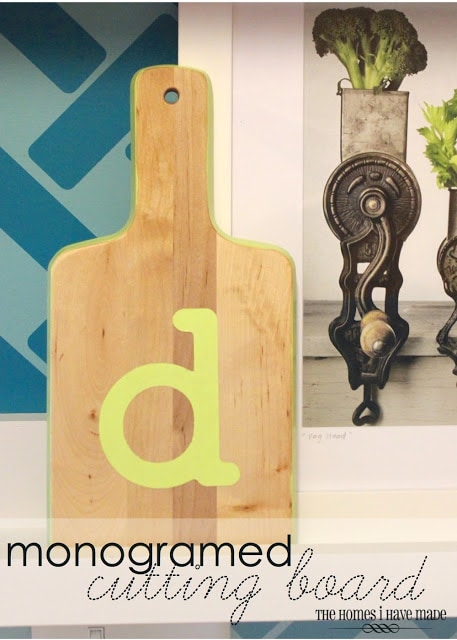 I love anything monogrammed; and when I saw this butcher-block mini cutting board at IKEA for less than $3, I knew it was the perfect piece to add to our kitchen. 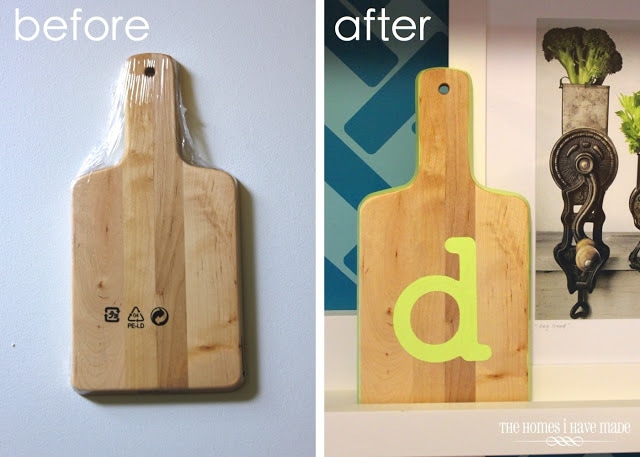 To create my stencil, I picked a cute letter “d” from among my Cricut cartridges and cut the letter out of some scrap vinyl (pst – always save those scraps of vinyl, you never know when you’ll need a little piece!) I then trimmed down the cutout and centered it on my cutting board. 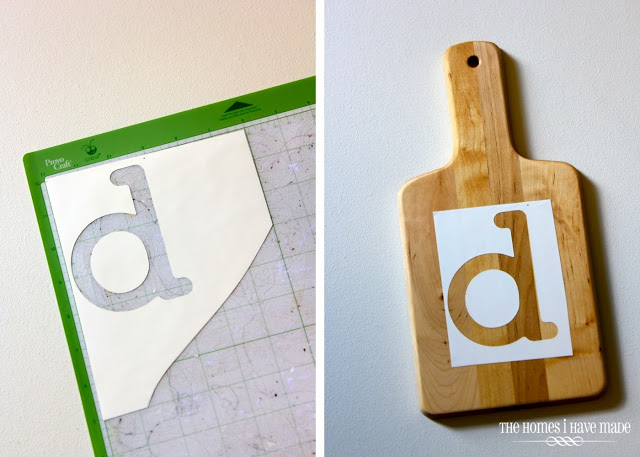 I filled in the letter “d” with a paint brush – I find I get cleaner lines on projects like this if I go slow with a paintbrush rather than “dobbing” all over it. It really lessens the chance of leaking under the vinyl. I also free-handed the edge of the cutting board. No taping needed, just go slow and steady. I wish I could tell you the name of the paint color, but it was on the “reject” shelf at Home Depot. I got the whole quart for $2. I kept staring and staring and staring at the color and felt like it just needed to be in my house. It’s gonna make some other appearances here and there, so keep your eye out! 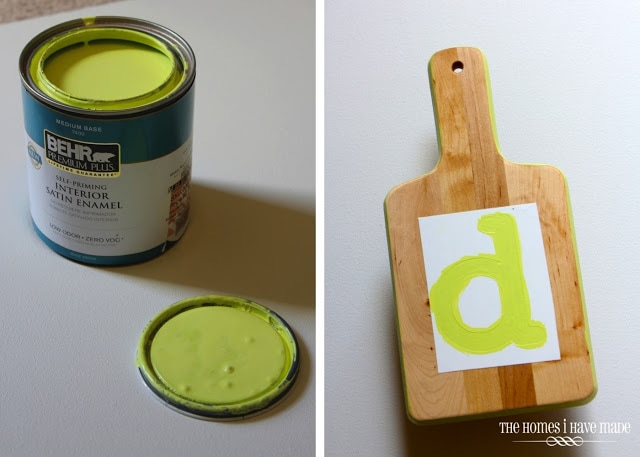 I peeled off the vinyl while the paint was still wet after a second coat. It’s a nice pop of color for our kitchen! 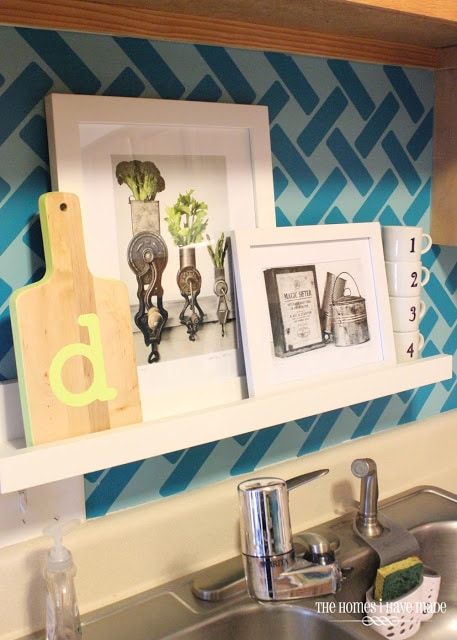 At the same time I was cutting vinyl and stenciling the cutting board, I wanted to try my hand at another idea I’ve seen a million times on Pinterest: stenciling with a Sharpie! 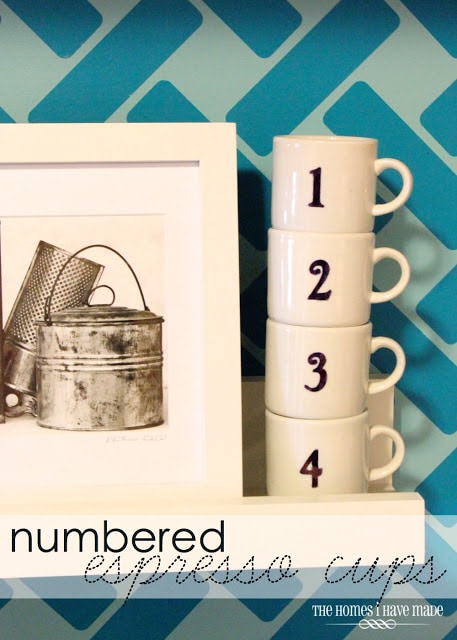 I found these little espresso cups in my mom’s basement. I think they are from IKEA years ago, she thinks they are from their time living in Spain. Either way, she was fine with them coming to live in my home 🙂 My stenciling process here started the same way: cutting small numbers out of some vinyl scraps using my Cricut. I then trimmed them down to make them easier to place. 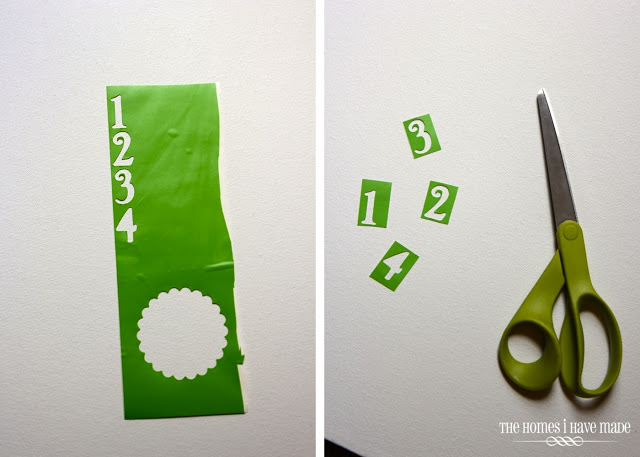 I cleaned the cups and then placed the vinyl numbers on the center fronts of each cup. 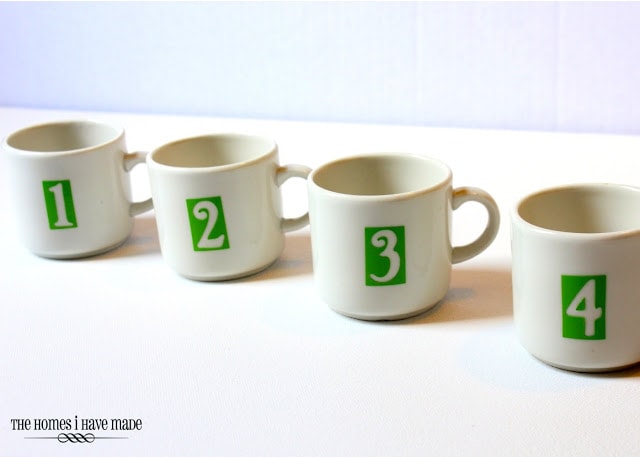 I then used a fine-tipped Sharpie to fill in the numbers. I outlined the edges first and then went back and colored them in. After reading a bunch of “Pinterest-Fail” posts on this method, I went ahead and baked the cups at 350 degrees for 35 minutes after pealing off the vinyl stencils. I haven’t tried to wash them yet, so I can’t report back if the marker washes off. Since these are meant for decoration only, I don’t know if I will ever wash them. 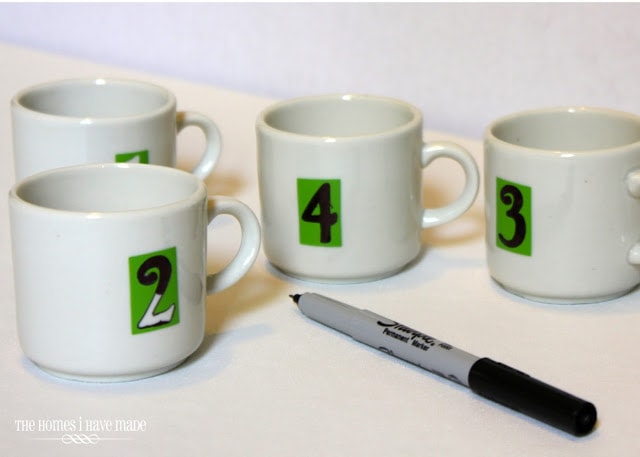 Again, a simple little detail that adds a little more interest to this vignette, and it took just minutes!

My third stencil project was on an oversized finial. Again, I did this the same time as the others – if you’re cutting vinyl and stenciling on several projects, you might as well do it all together! Same as before, I cut letters (this time for a three-lettered monogram) out of vinyl scraps and adhered them to the center of my finial. I then used Silver Rubb’n’Buff, applied with a paint brush, to fill in my letters. This stuff is really fun to work with. It goes on like paint but has a finish similar to metal and is super opaque… so one coat is all you need. 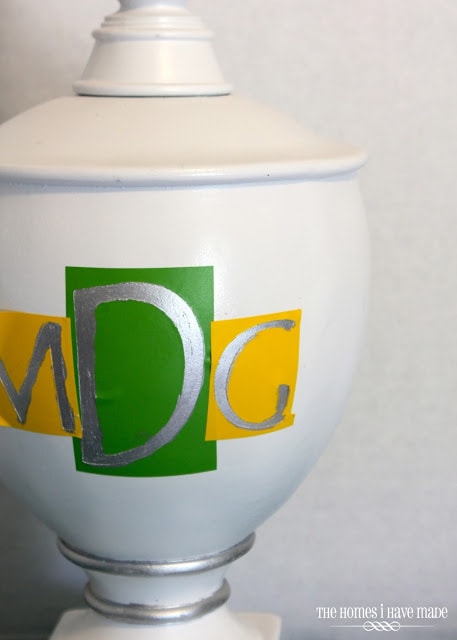 No “after” picture for you on this one. You’ll have to wait a bit to see where it ends up! But I wanted to include this project here because 1) I did all three of these projects at the same time (during one nap, that’s how quick they were!); 2) They use similar stenciling technique – numbers and letters cut from vinyl; BUT…3) they used different mediums: paint, marker and silver leaf to achieve different looks and effects!

So next time you have a few minutes on your hands to change up something in your house, consider putting a big number or letter onto something plain and unassuming. It won’t take long and adds a fun detail to your space!

All for today my friends. Be sure to check back later this week for a sneak peak at some major progress in the Living Room!