posted by Megan on December 13, 2013 This post may contain affiliate links.

Hello hello, everyone! Thank you so much to all of you who have left the nicest comments about our holiday living room. I’ve still got tons to show you, so stay tuned 😉 As I mentioned on Wednesday, one of my favorite additions to our holiday decor this year was a new tree skirt. In the past, our tree skirts have had one of two problems: 1) they were red (not gonna work with this year’s theme) and/or 2) they were always too small. Truth be told, the latter was really the reason I set off to make a new tree skirt this year. It’s really bothered me in years past to have a big grand tree and a teeeeeeny tiny skirt underneath. When I set out to make this year’s skirt, I wanted it big and I wanted it neutral, so it will always work with our decor, no matter what theme I go with! 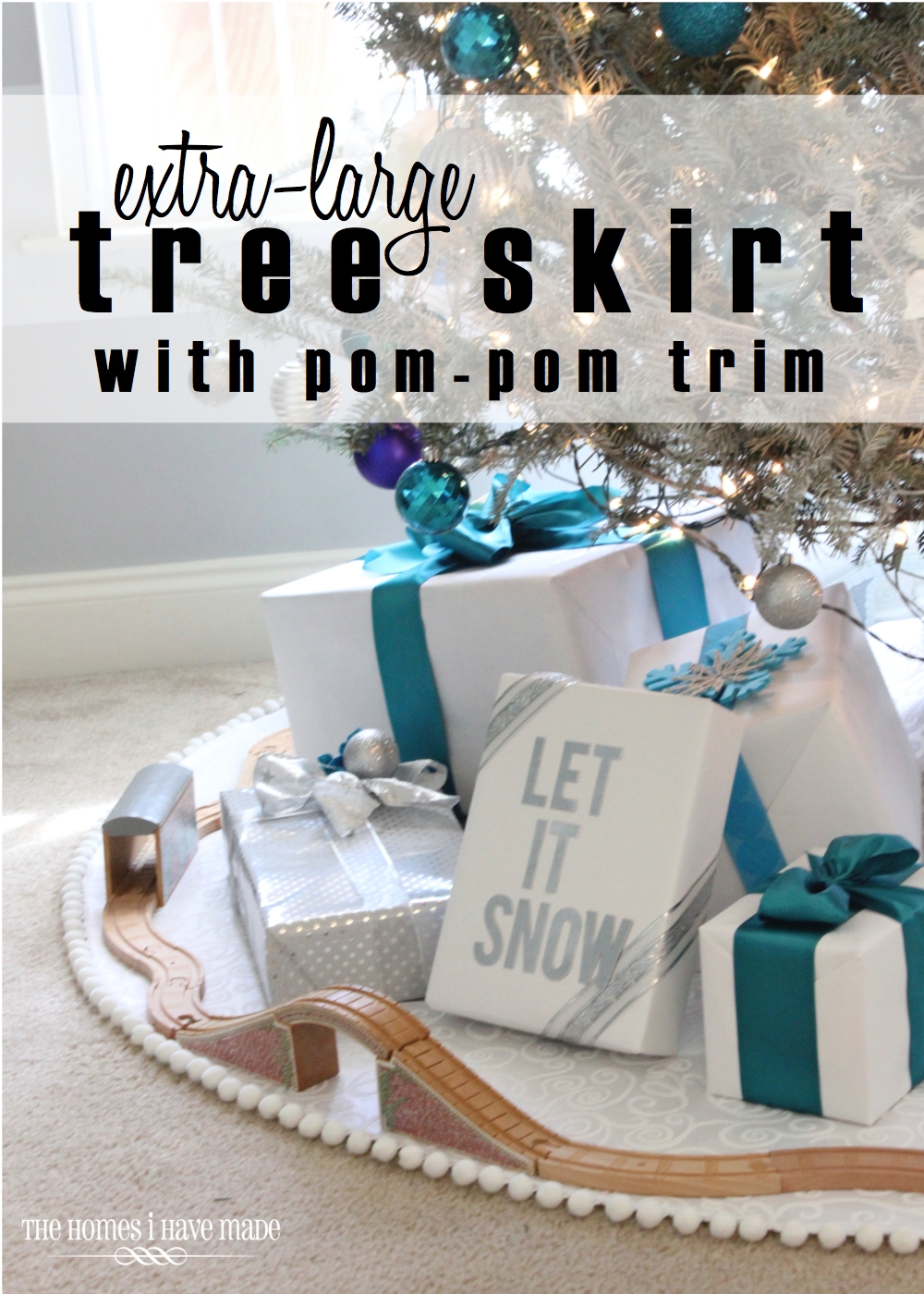 Let me just say, I am so crazy about our new tree skirt. It was one of the very last projects I completed for the home tour (as in 5:30am the morning of the tour!), and I somewhat made it up as I went along… but boy was it easy and boy do I love it! 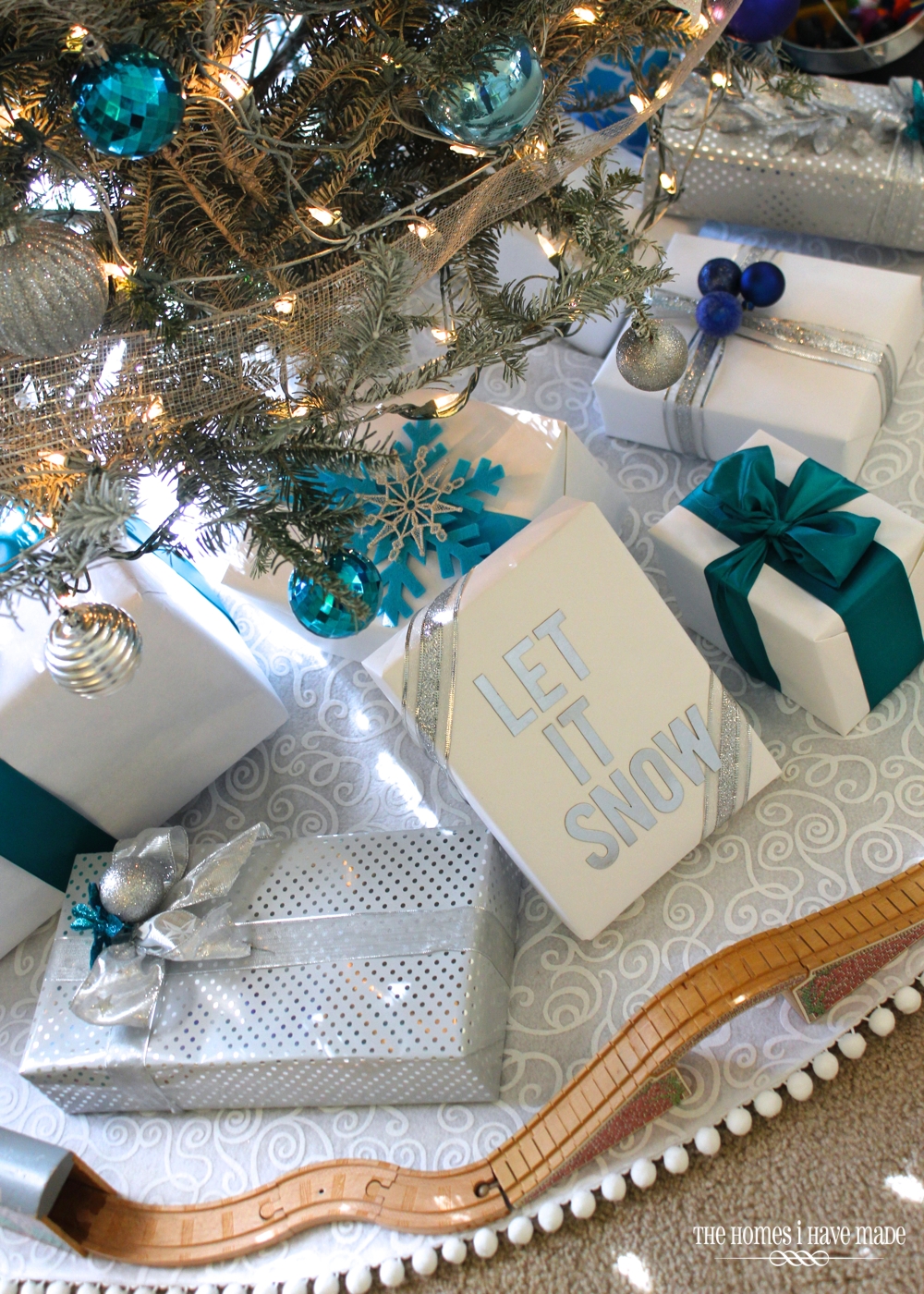 In those final hours before the tour of homes, I almost decided to forego the pom-pom trim, but something told me to “just do it.” I am so glad I did because it added so much charm – the perfect finishing touch! 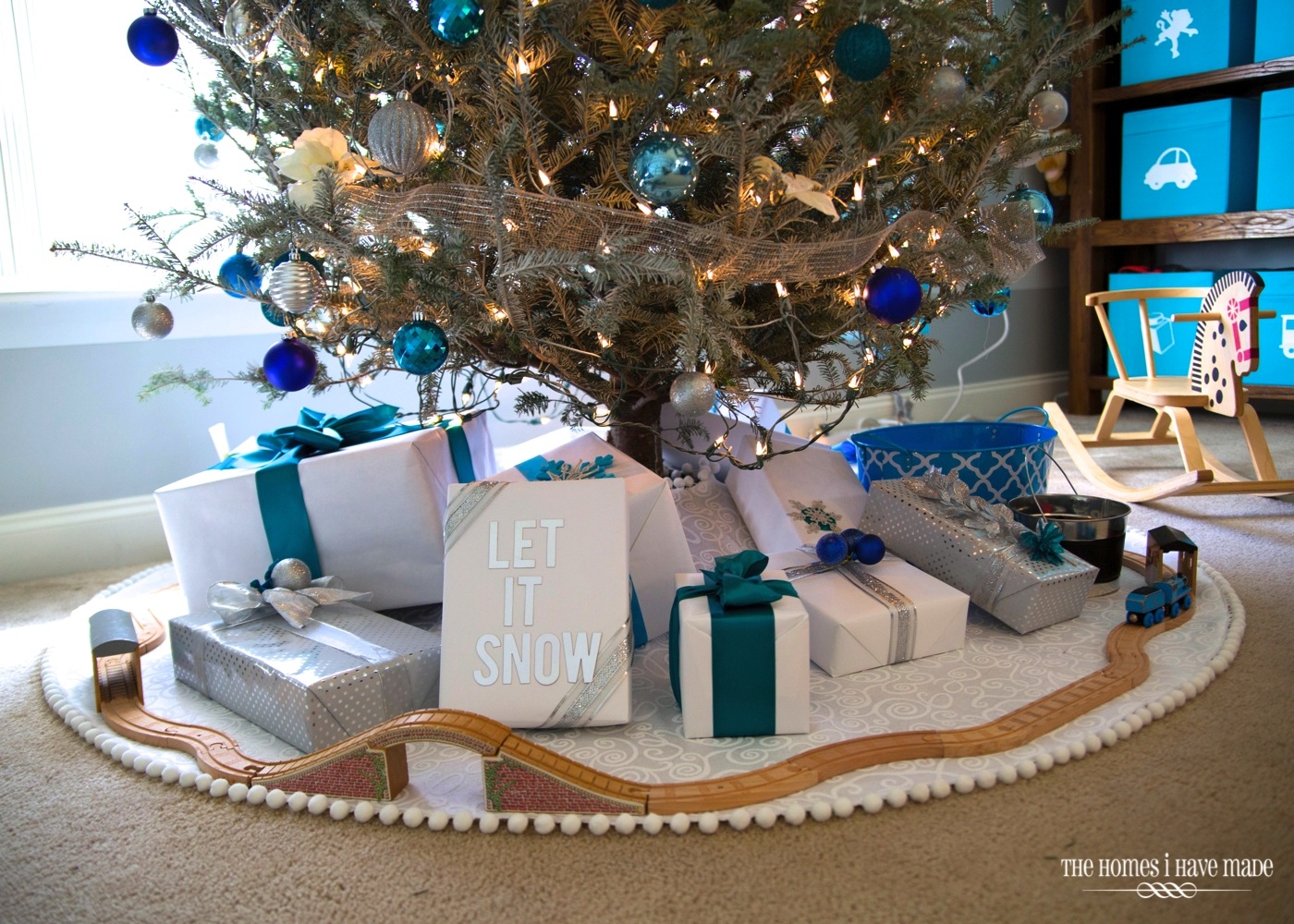 And when I say “big,” I mean big! It’s hard to tell perspective in these pictures, but this skirt measures almost 70″ in diameter! I think it’s safe to say it will never be too small for whatever tree we get down the road! 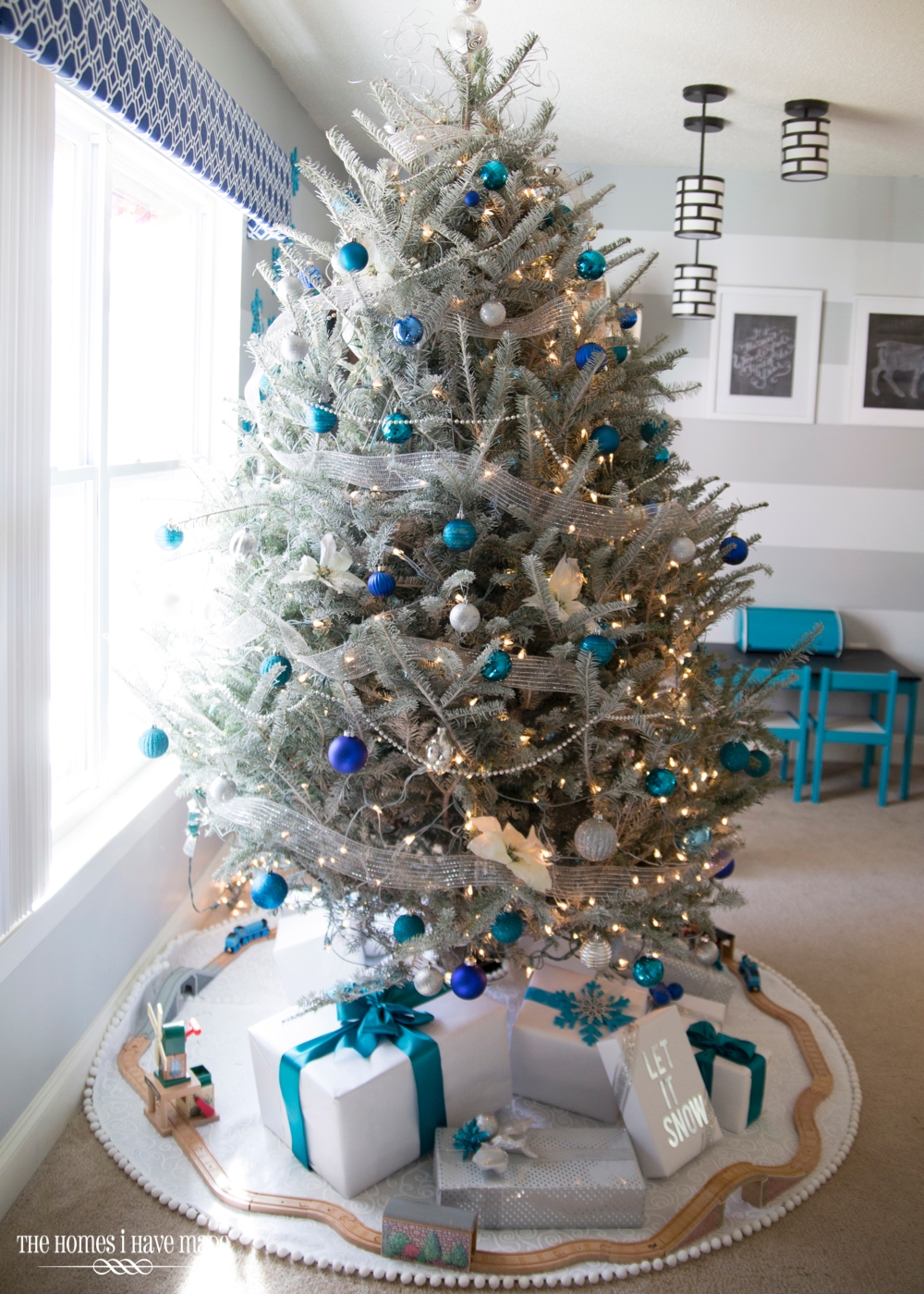 Okay, so I did pause long enough in my early-morning sewing session to snap photos for you. But they aren’t the greatest quality photos, so don’t be too hard on me. Even with bad photo quality, I think you’ll be able to get the gist of it! Let’s get started!

I found this felt fabric at JoAnns. I loved that 1) it was felt, meaning no hemming or edging would be required! 2) it already had an awesome, scrolly, wintery pattern on it; and 3) I could use a 50% off coupon, making these 4ish yards of fabric about $15!

I bought about four yards of the 36″ wide felt (it was the end of the bolt, so I’m not exactly sure how much I got). In the picture below, it is doubled under, so you are looking at at about a two yard length. 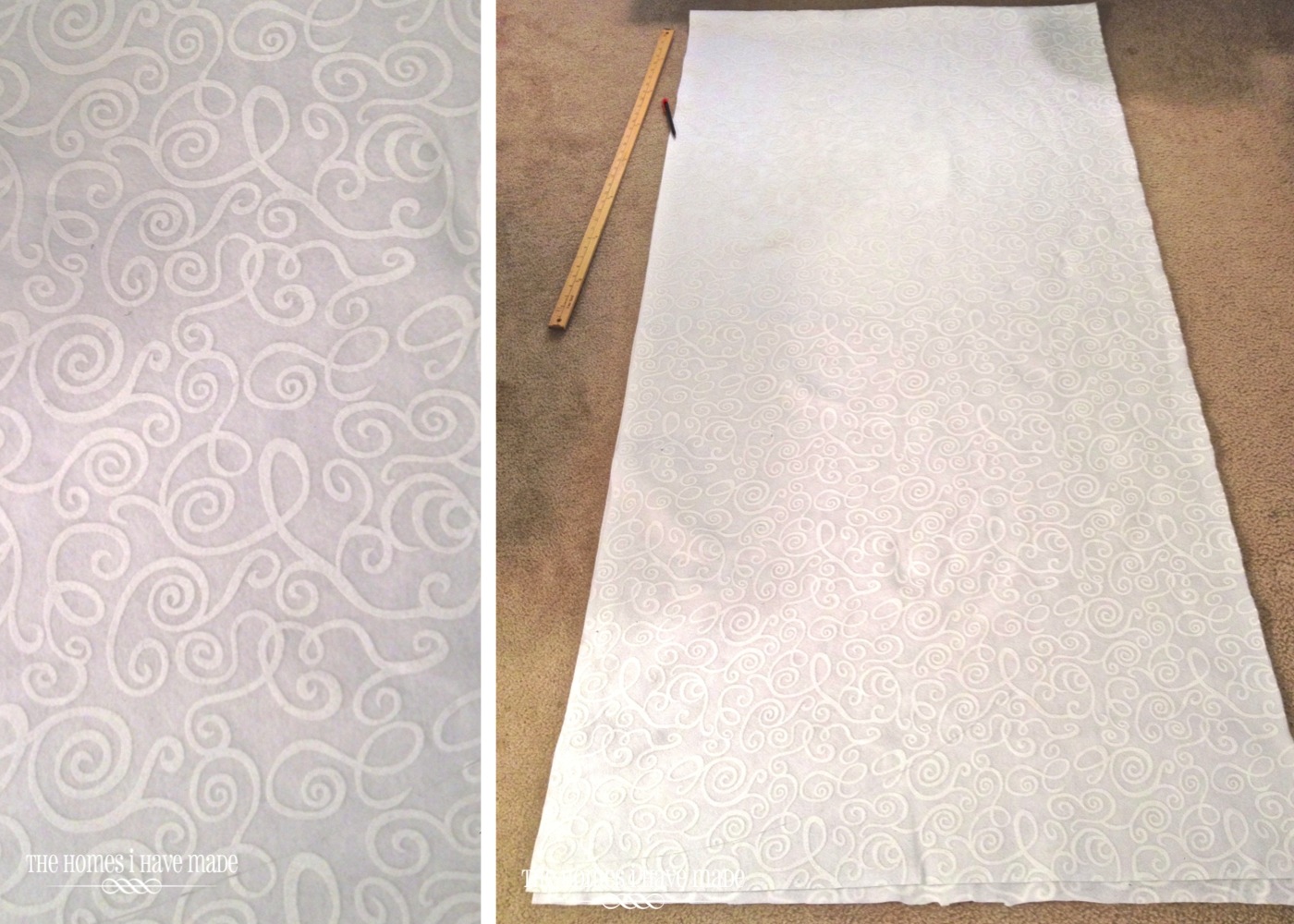 I essentially used my yard stick as a compass to draw a half circle on the top layer of my felt. I stuck one pencil (the red one at the top of the photo below) in one hole of the yard stick and placed it in the center of my two yard length (this would act as my pivot point). I stuck the blue pencil in the other hole at the other end of the yardstick. I pivoted the yardstick (around the red pencil) and drew a half circle onto my fabric (with the blue pencil). It sounds complicated but it took me all of about a minute 🙂 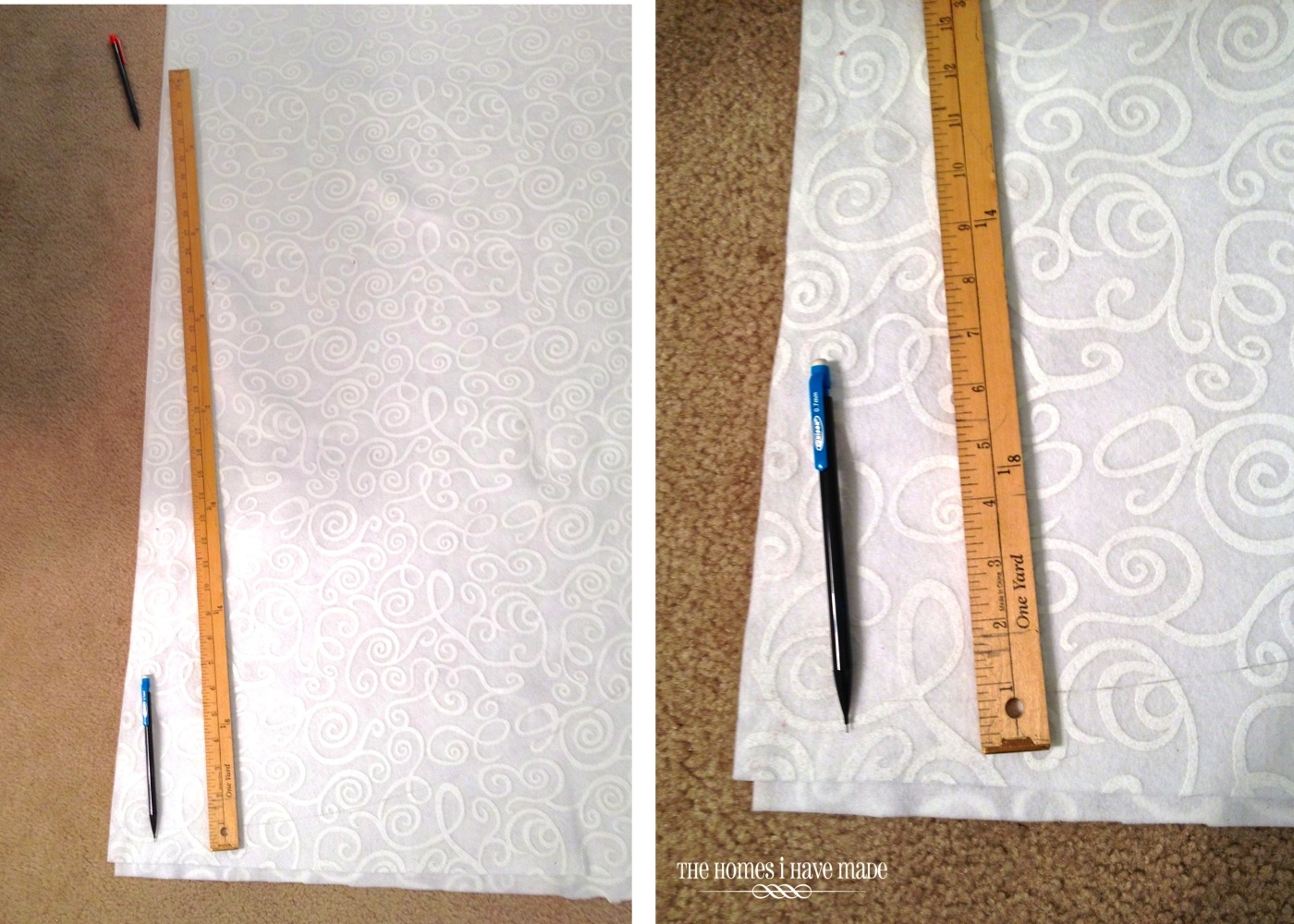 I then cut out the half circles (with a pair of scissors). Note – my fabric is doubled over here so I ended up with two, really large, half circles) 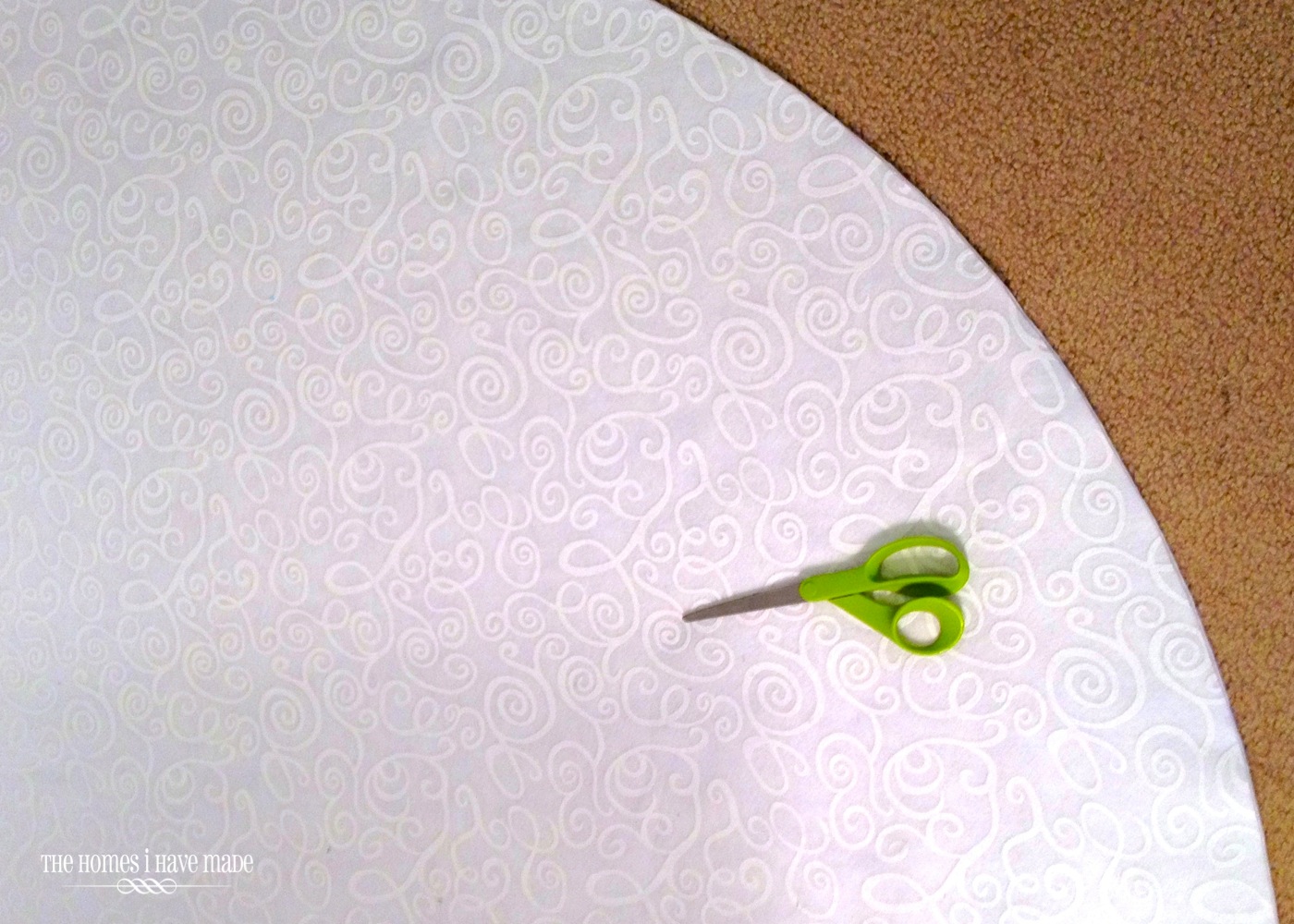 I then grabbed a mixing bowl from my kitchen to use as the center hole (for the tree to go through). I traced around half of the bowl, and cut out the half circle (again, from both layers of fabric). 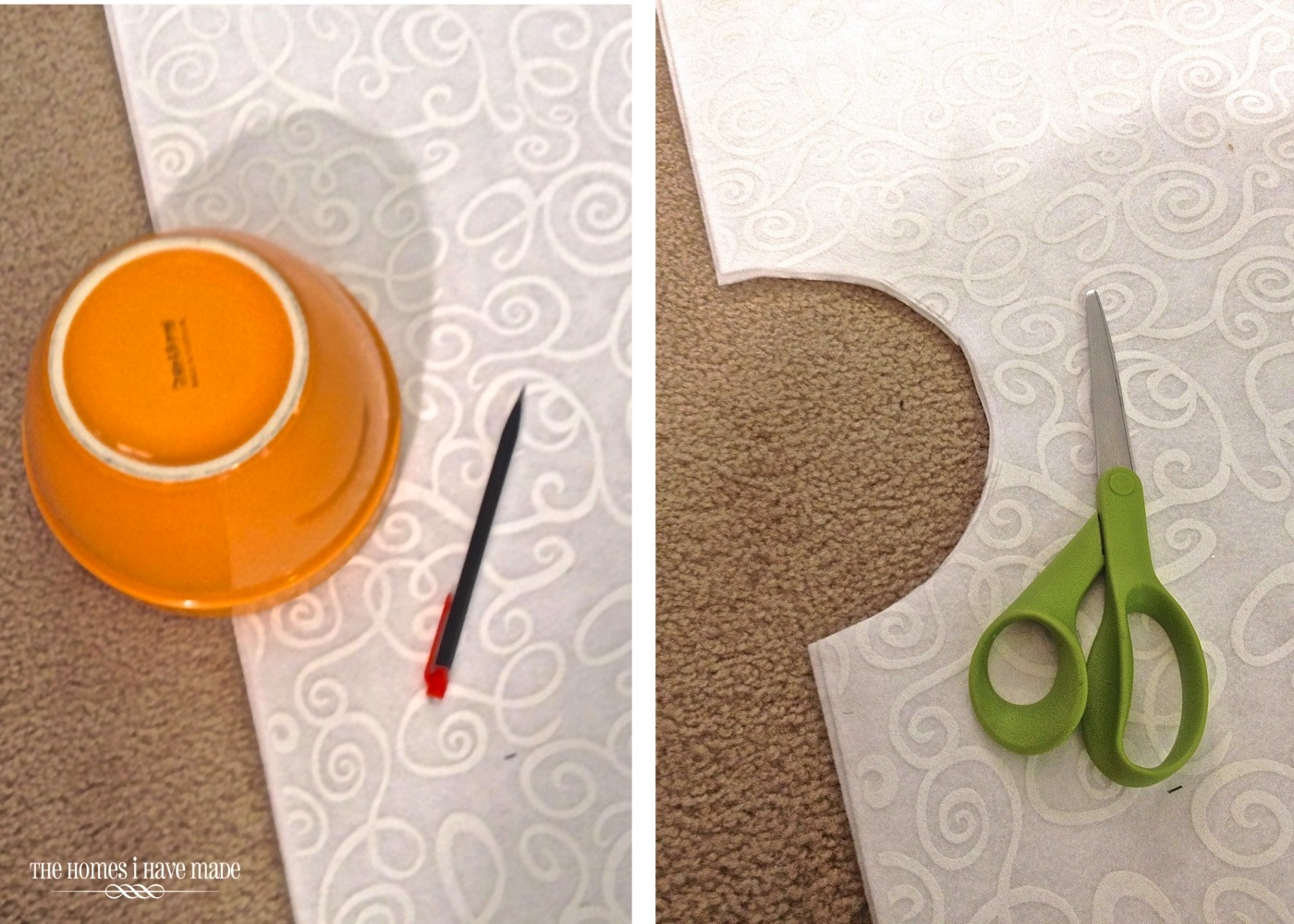 If you’re in a super hurry, you could actually stop here. You can lay your two half circles around your tree and not sew a single stitch. The circle is big enough that the two half circles overlap. If you want to sew it together and add the pom-pom trim, keep reading 🙂

I placed my right sides together and just pinned down ONE half of the semi-circle. I then used my serger to sew the seam together. Since felt can be really bulky, I didn’t want a ton of seam allowance underneath. If you don’t have a serger, sew it with a sewing machine and then trim down the excess fabric close to your stitch line so the whole thing will lay relatively flat. 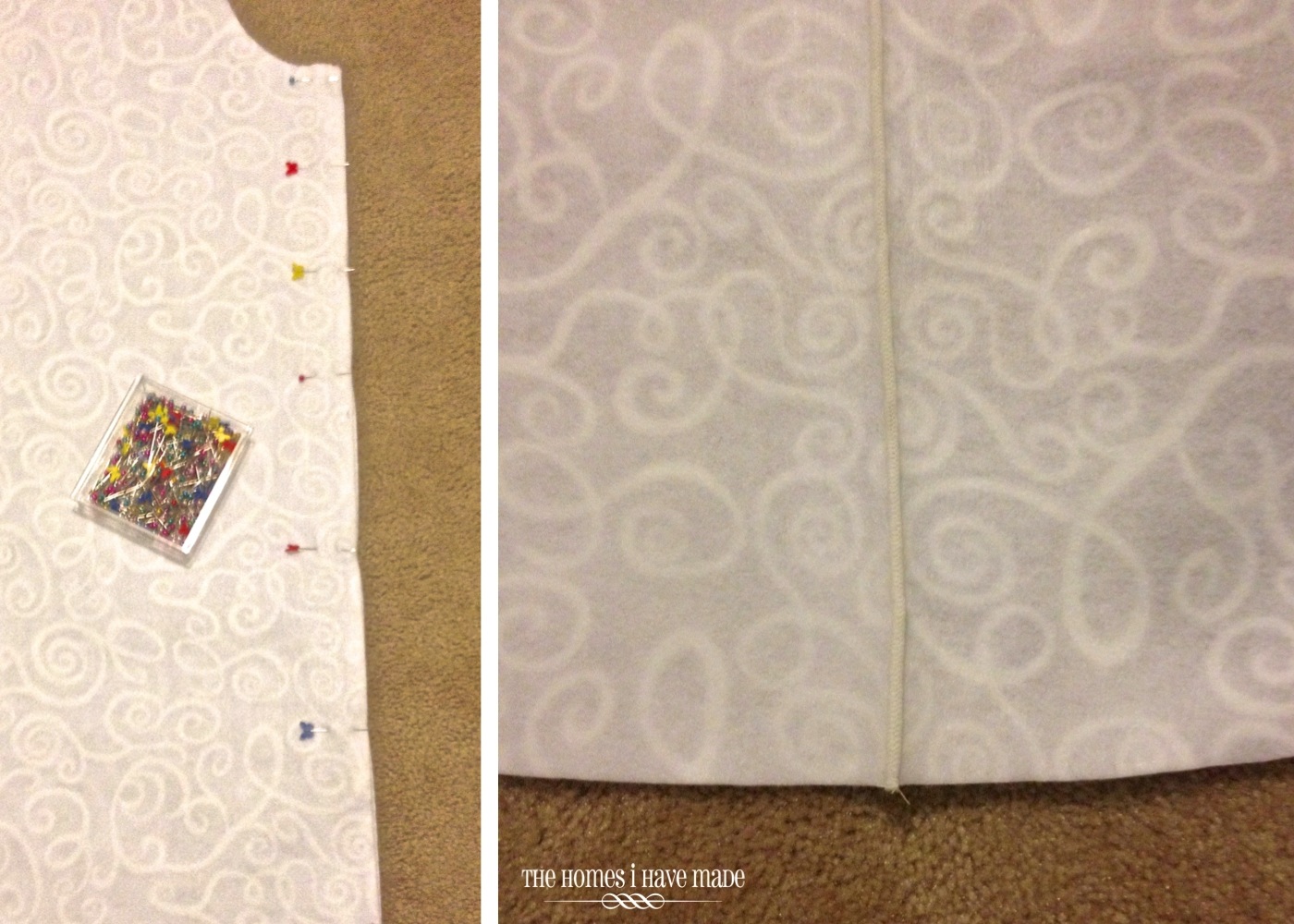 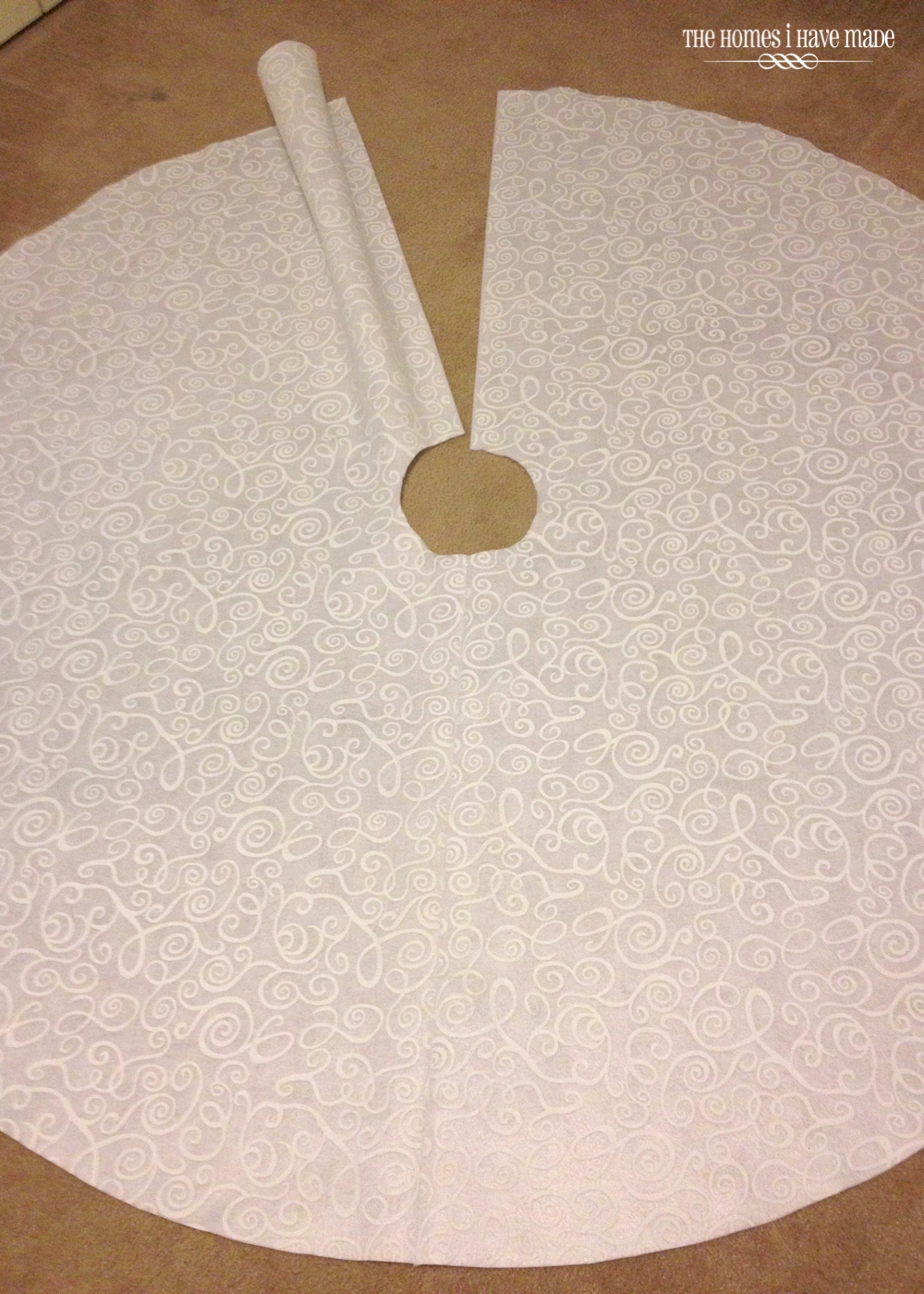 The last step is to add the pom-pom trim. I ended up needing about 10 yards. I can never really trust my local craft stores to carry anything (especially in large quantities), so I went ahead and ordered a 12 yard spool from Amazon. 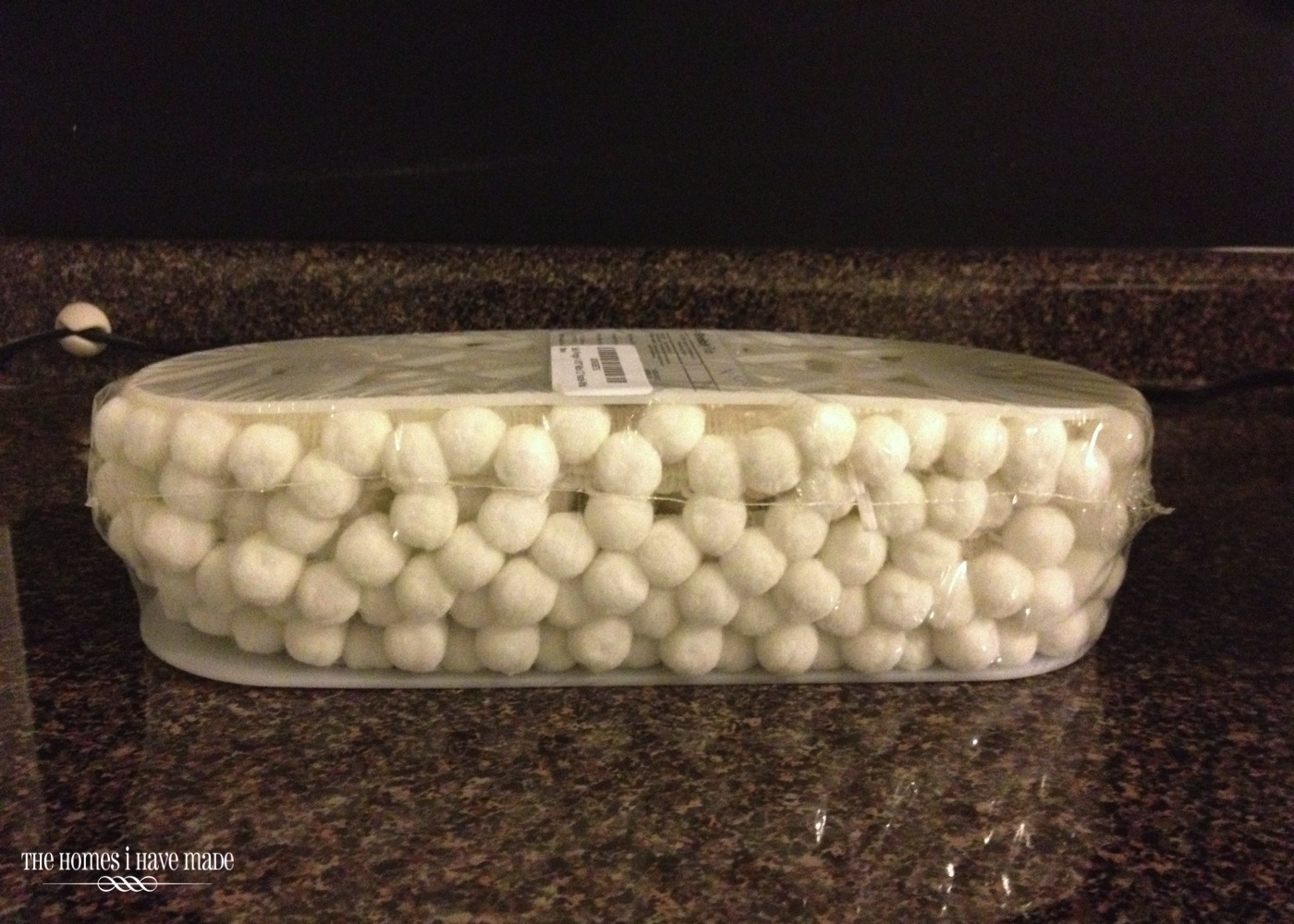 This next part is simple but can be a bit tedious, especially considering the size of this tree skirt! Starting in the center of the “keyhole,” and working my way out, all the way around, and then back in, I pinned the pom-pom trim to the WRONG side of the tree skirt. Then using my zipper foot and coordinating thread, sewed the pom-pom trim to the felt close to the edge. 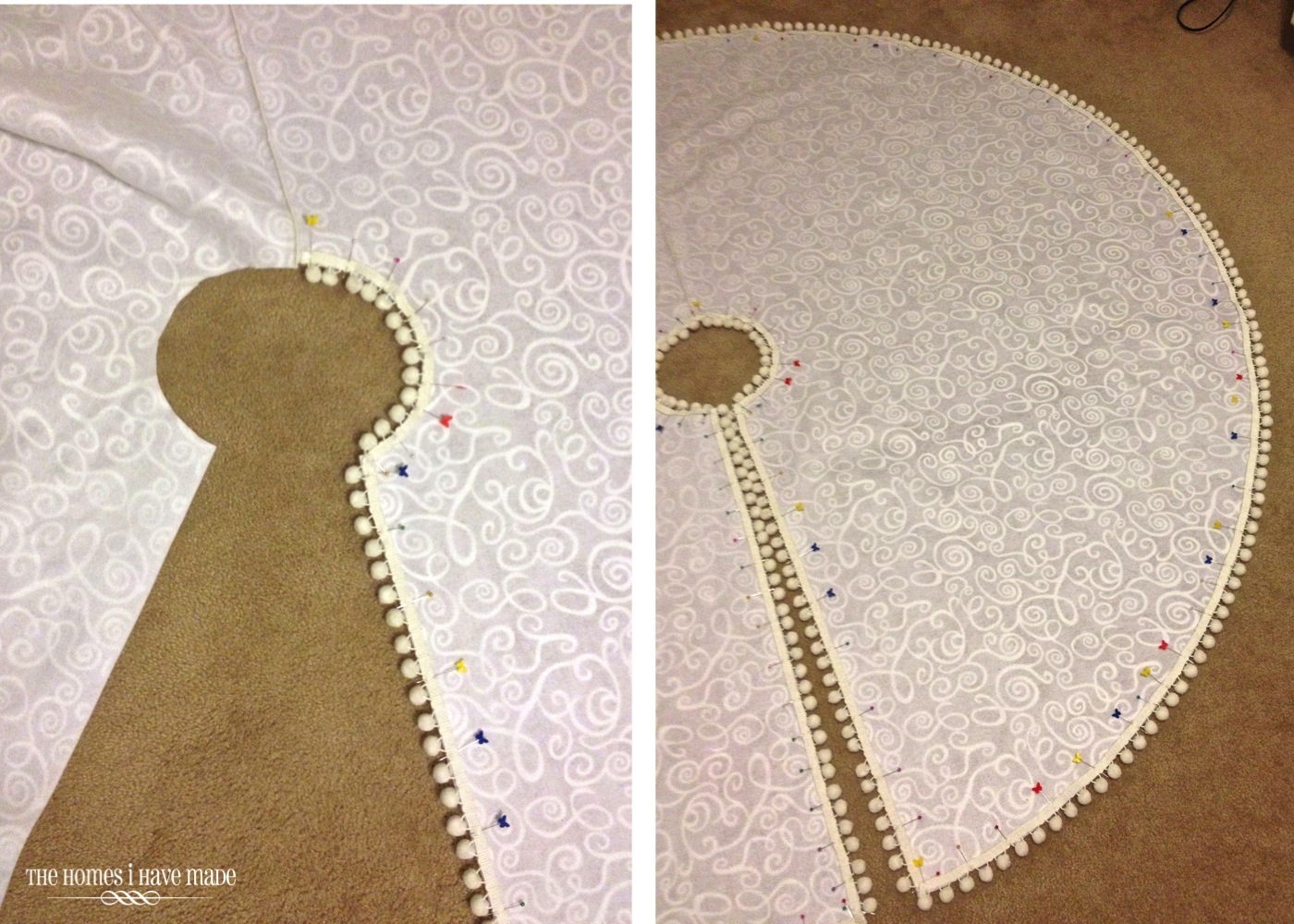 And you’re done! I didn’t sew any closures on the tree skirt because, as I said before, it’s such a huge circle that it overlaps quite a bit in the back. You could always add a ribbon or button closure if you need to!

The patterned felt plus the pom-pom trim just screams cozy, comfy winter to me, don’t you think?!? 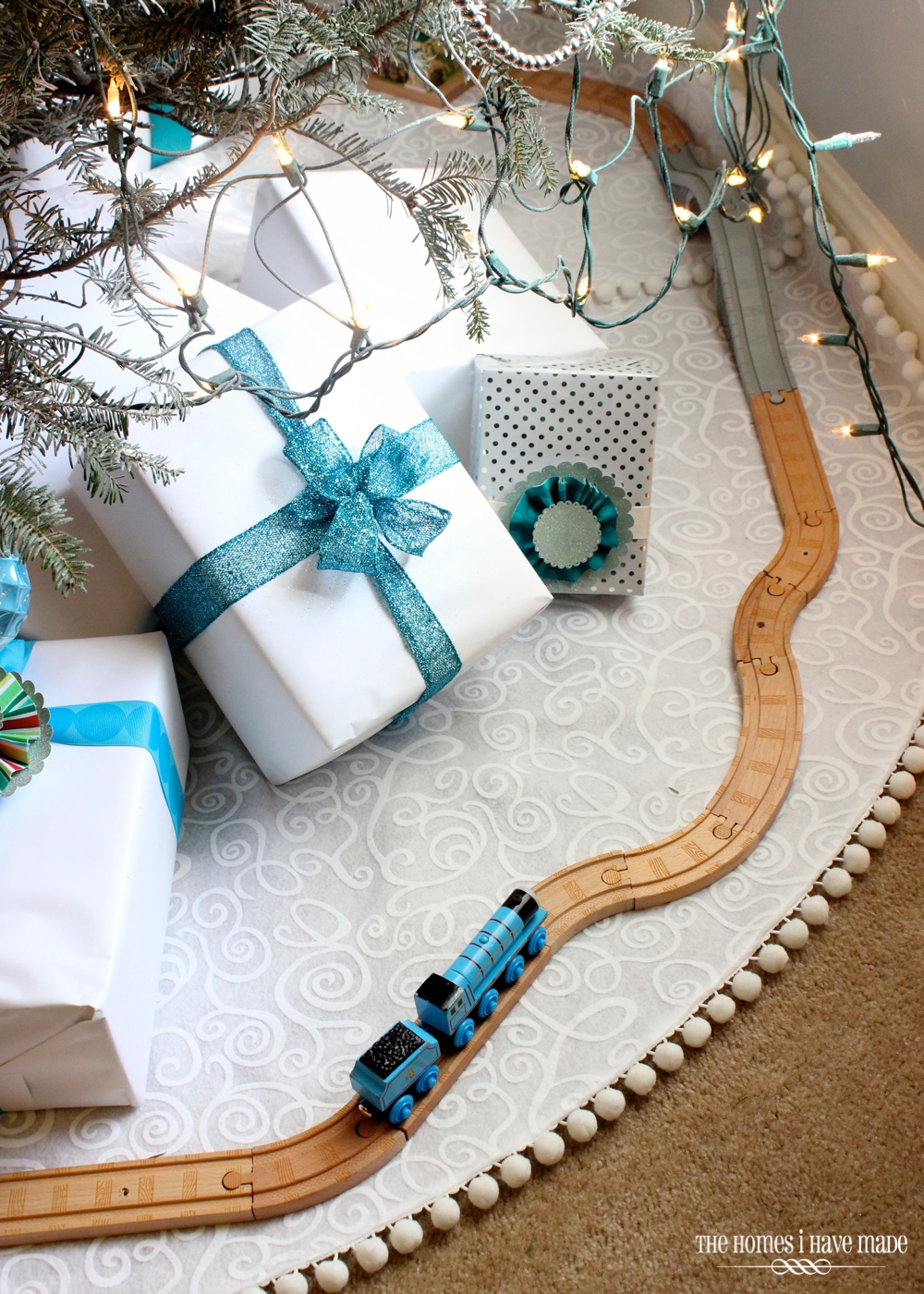 I wanted to show you this picture (below) of the seam. Smaller tree skirts can be made without a seam, but to make one this big, a seam is almost inevitable (unless you have super wide fabric!) Once the train track and gifts are added, you can hardly tell! 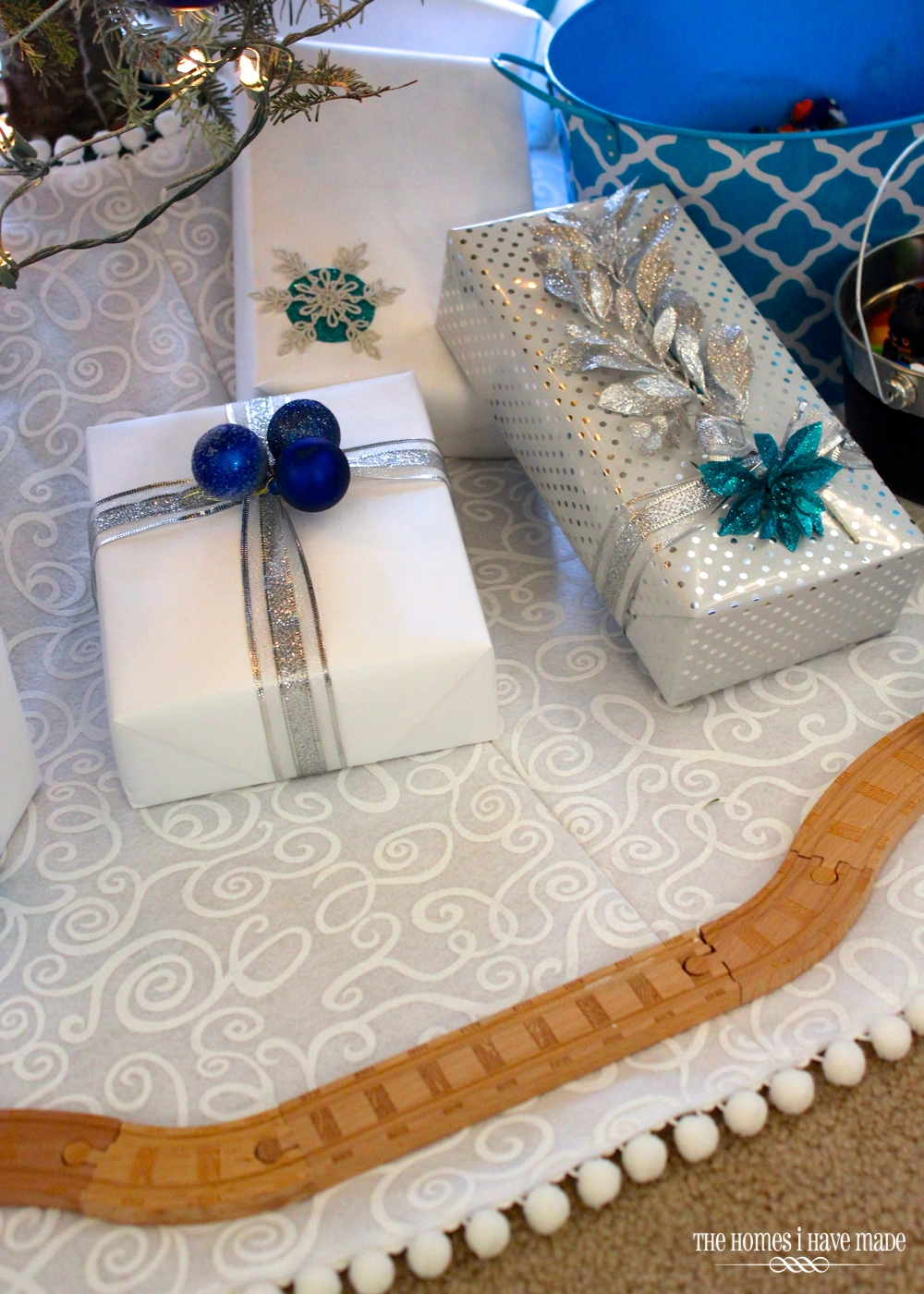 This project probably took me about an hour, and most of that was spent pinning and sewing on the pom-pom trim. If you’re not a sewer, this whole thing could also be done with a hot-glue gun and would have equally as stunning results! 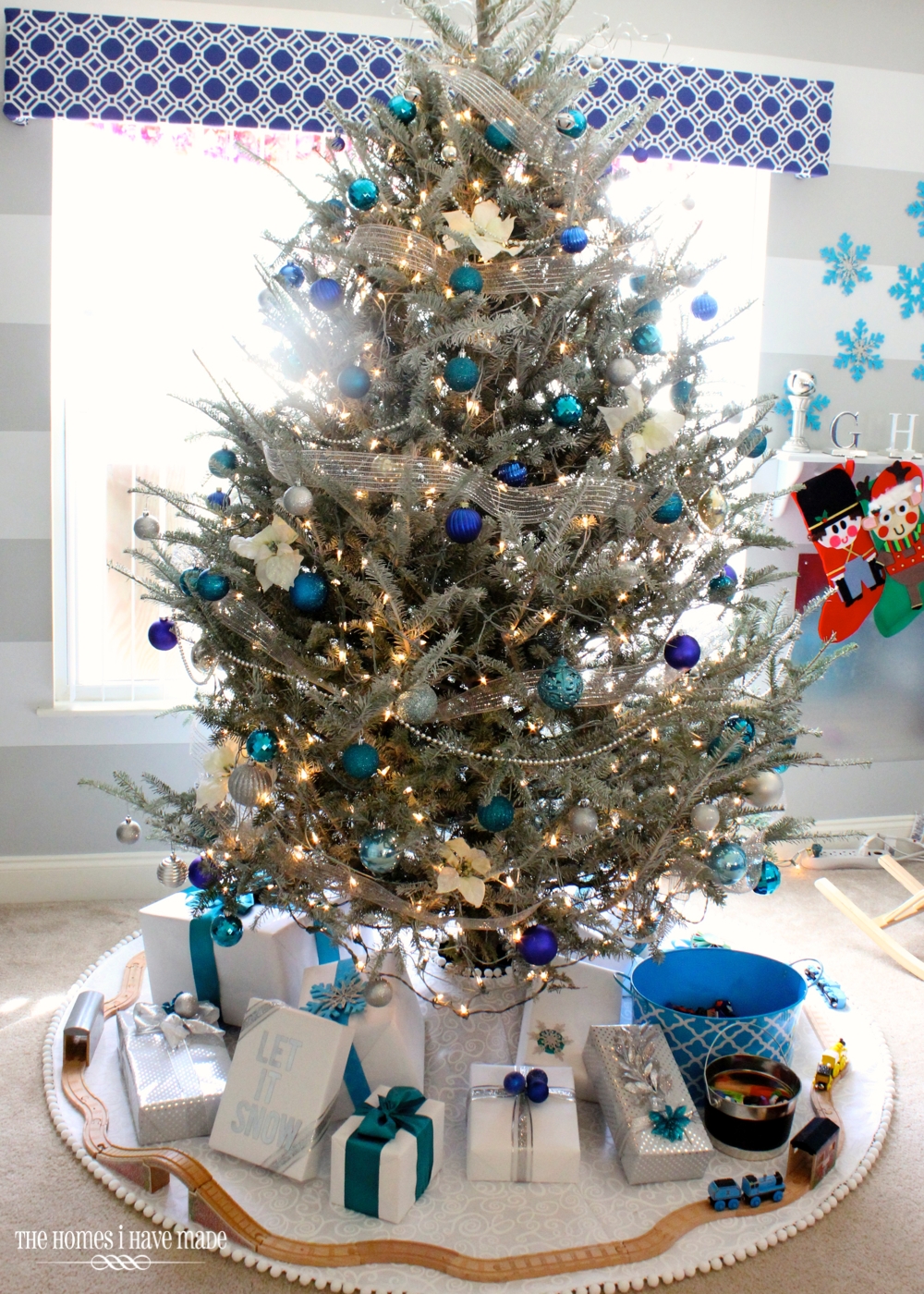 If you’re in quick need of a new tree skirt or are simply looking for something new, I suggest giving this one a try. So much texture and so much personality for under the tree…and it set me back about $30 and one hour!

I hope you all have a great weekend. Monday, I’ll continue with the holiday tour in our dining room! See you then!