posted by Megan on May 24, 2019 This post may contain affiliate links.

At the end of last summer, I was helping my girlfriend give her daughter’s bedroom a “rainbow unicorn” makeover. Although both unicorns and rainbows seem to be everywhere right now, we were having a really tough time finding a bedding set that used the right colors and was on theme, yet wasn’t overly expensive or overly…ahem…tacky. After hours and hours of looking through every site we could think of, I suggested that instead of using a pre-assembled commercial bedding set, we use my favorite budget-friendly bedding trick that I use on our beds: white coverlet + pom-pom trim + fun sheets + themed throw pillow =  a chic yet fun display that is easily changed. I’ve briefly mentioned this formula here on the blog over the years, but today I want to show you why this approach works so well (especially for kids!) and how you can implement it into your own home! 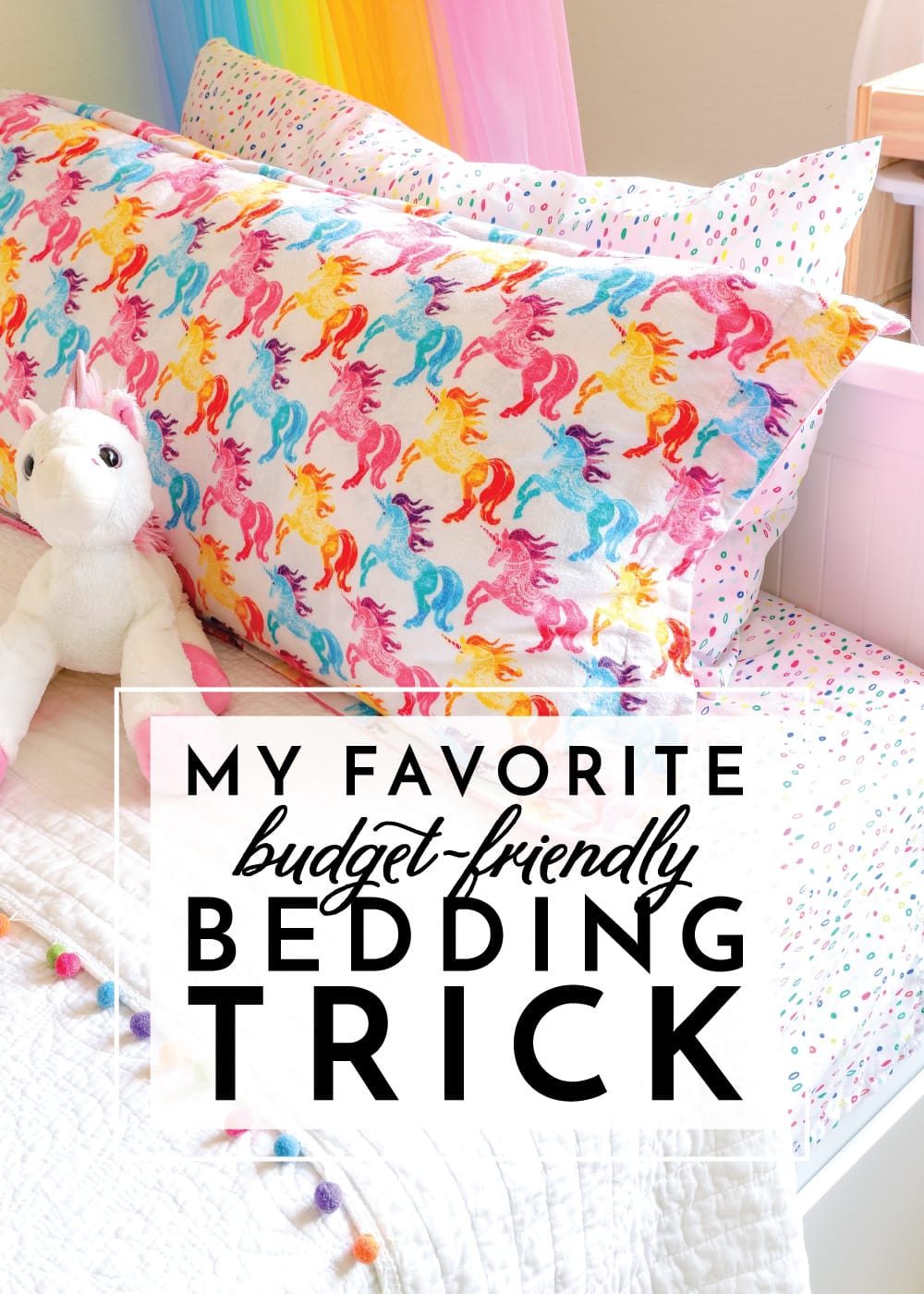 I stumbled upon this “magical combo” when I was giving Henry his first bedroom makeover after transitioning out of his nursery. As a Mom, I wanted to give him a fun and kid-friendly space, but the design-lover in me didn’t want his bedding to be sooooo over-the-top toward a particular theme that it really dominated the room. I also worried that since kids’ whims change so often, if we committed hard to a Cars or Sesame Street or Thomas the Train set, we’d be replacing all the bedding sooner than we wanted to.

I personally love crisp, white bedding, so I opted to forgo the traditional sheet+comforter set and instead paired a classic white coverlet with bright colorful sheets. I added the pom-pom trim almost as an afterthought, but it instantly transformed the plain off-the-shelf product into something with a more whimsical and fun aesthetic. 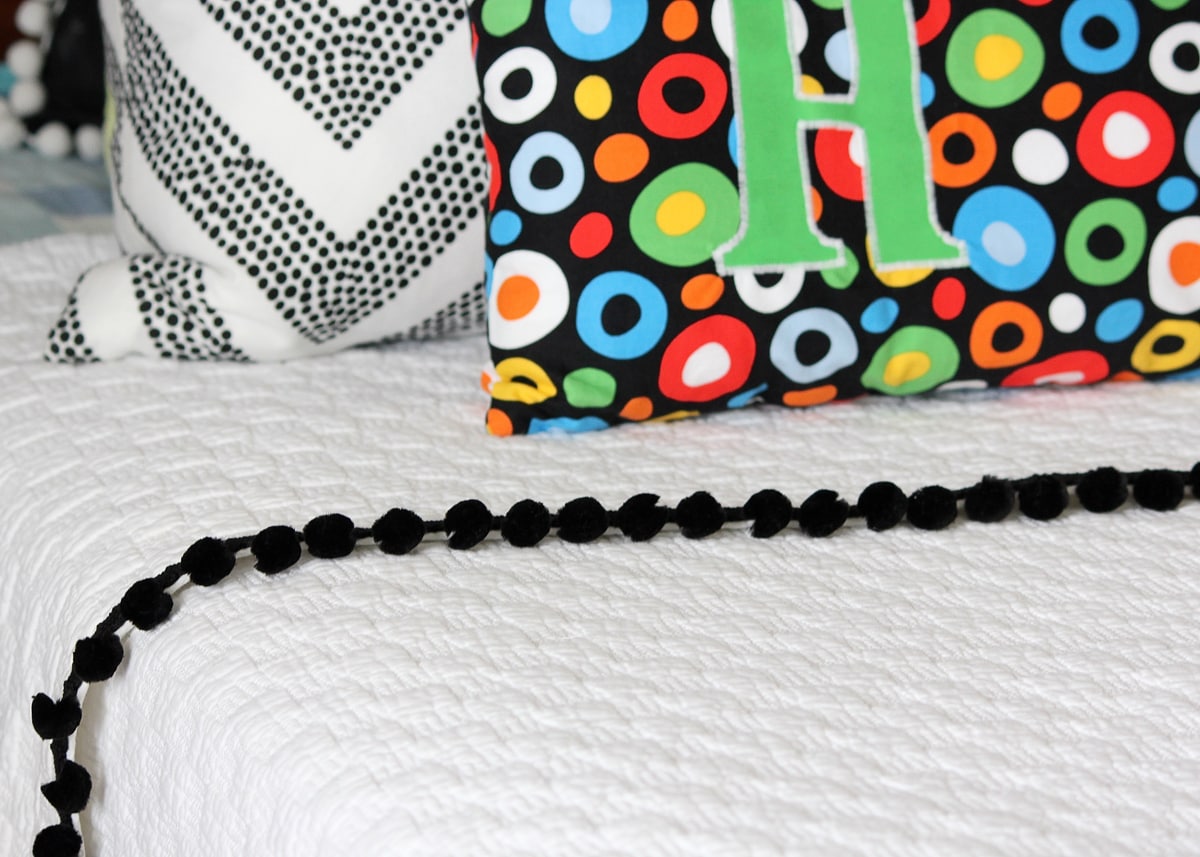 This bedding combination works really well for a few reasons. First, no matter what else you have going on in the room, the solid white bedding gives the eye a place to rest. So if you have colorful walls, colorful accessories, etc, the white bedding goes a long way in balancing out the more visually-dominant elements of the room. Second, with a solid, white bedspread, you are free to pursue pretty much any color scheme regardless of your theme…provided you can find other items to match, of course! Finally, the changeability of this method can’t be beat. If you’re daughter is really into Princesses right now but you worry in 6 months she’ll be onto fairies, or rainbows, or llamas (???), then a swap of a sheet set and a few accessories is easier to pull off than an entire bedding display! 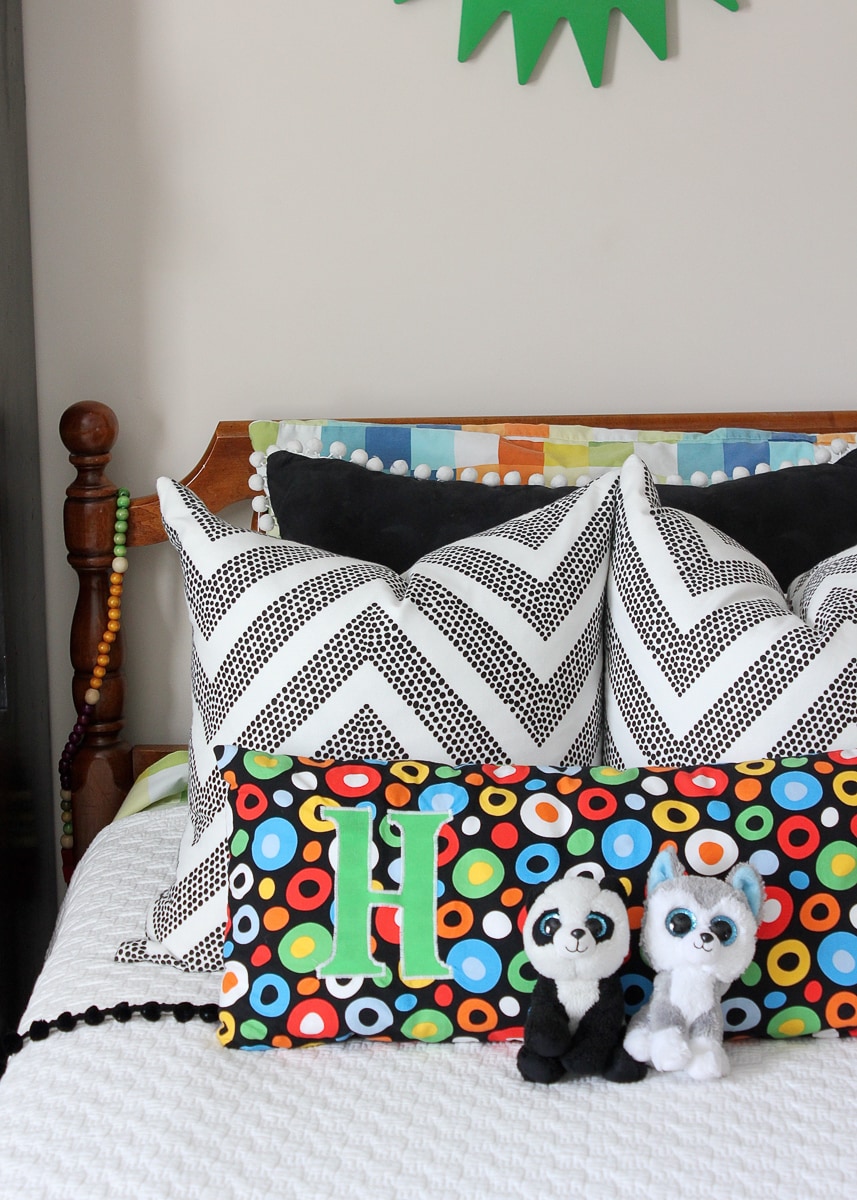 Here’s what I mean. When I first made over Henry’s bedroom, we went with a strong “modern jungle” theme all done in primary colors. 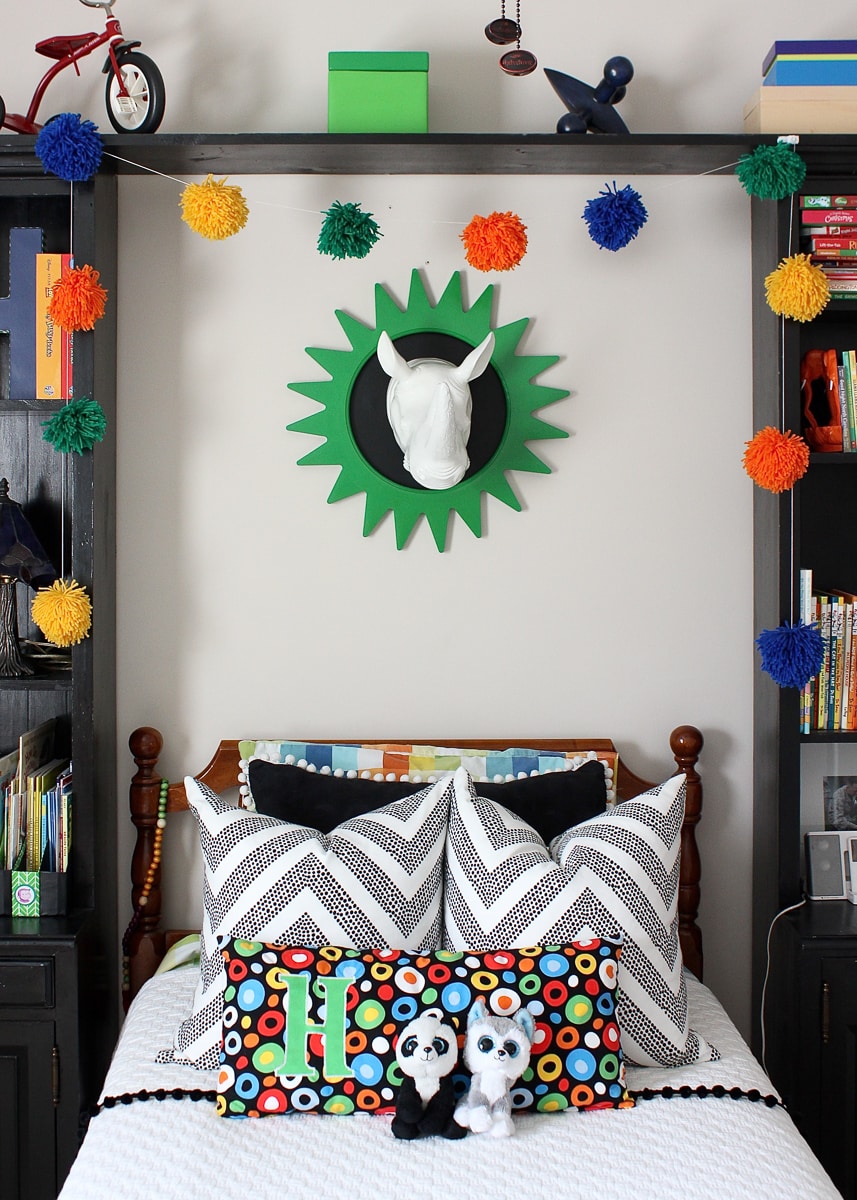 This past summer, I (finally) updated his room into a Star Wars theme. Instead of trying to hunt down bedding that matched some of the more permanent elements of his room, I simply swapped the sheets for a set I found on clearance ($10!!!), bought a new orange pillow sham, and re-covered his throw pillow with some Star Wars-themed fabric. 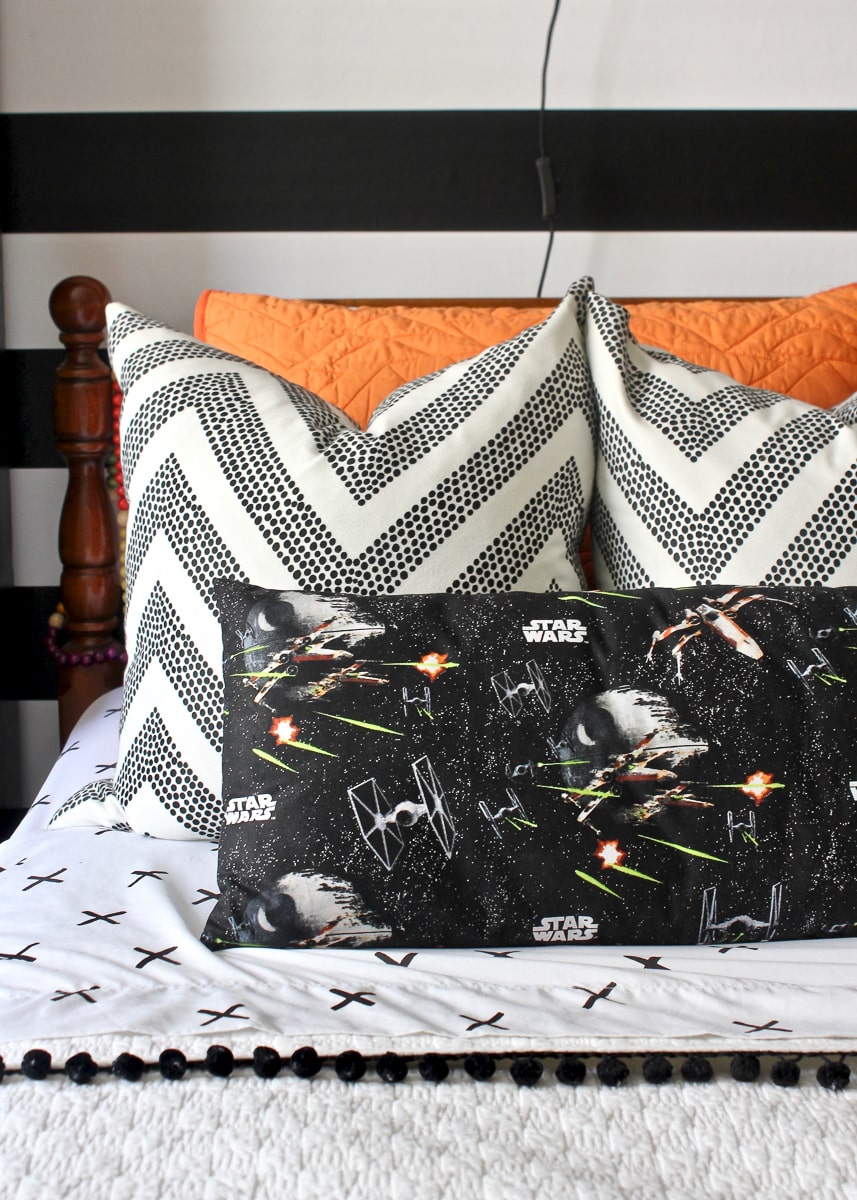 Not only did this swap cost me about $25 total, but it also provided some freedom (design-wise) to bring the theme to life in the colors and aesthetic I preferred (versus ones I had to use to match a specific bedding set.) 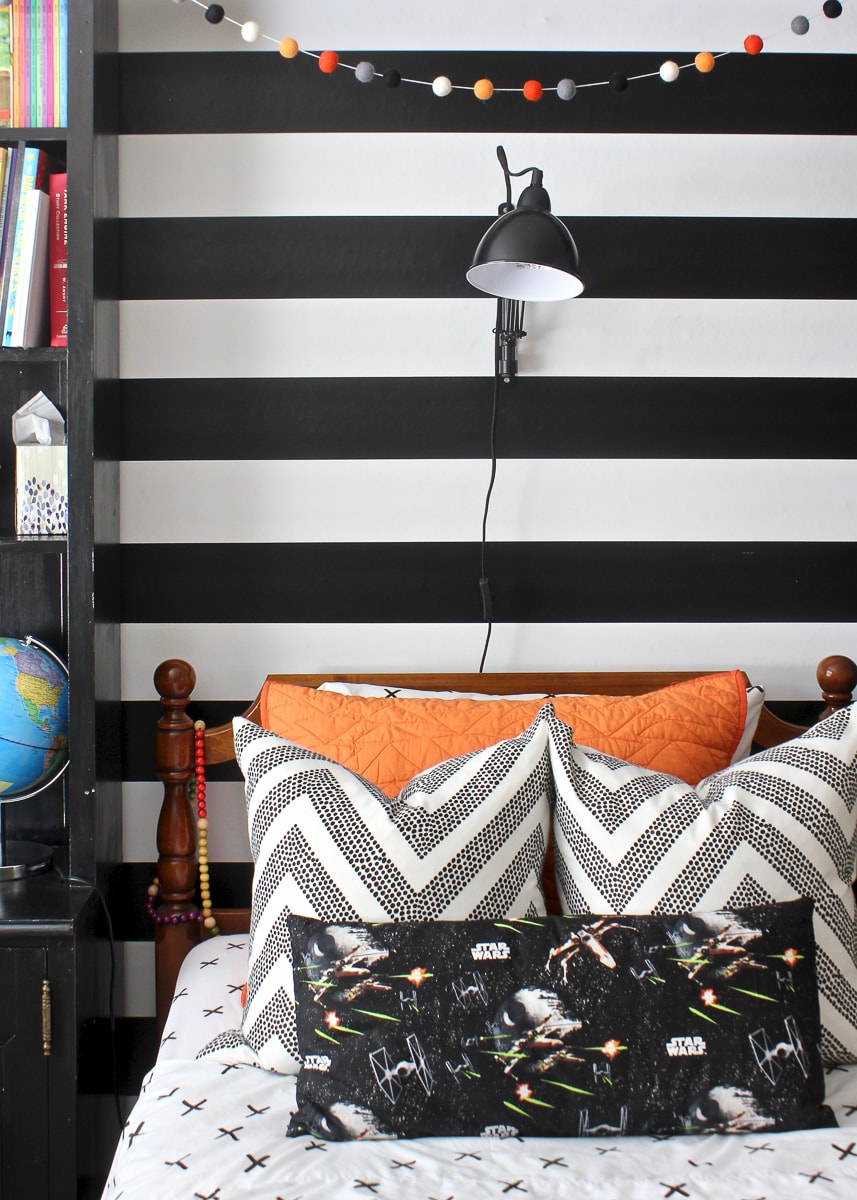 Let’s go back to the rainbow unicorn room to see another example in action. Once I convinced my girlfriend to head in this direction, our task of finding sheets + pom-pom trim + a theme fabric became much easier than finding the perfect pre-assembled bedding combo. 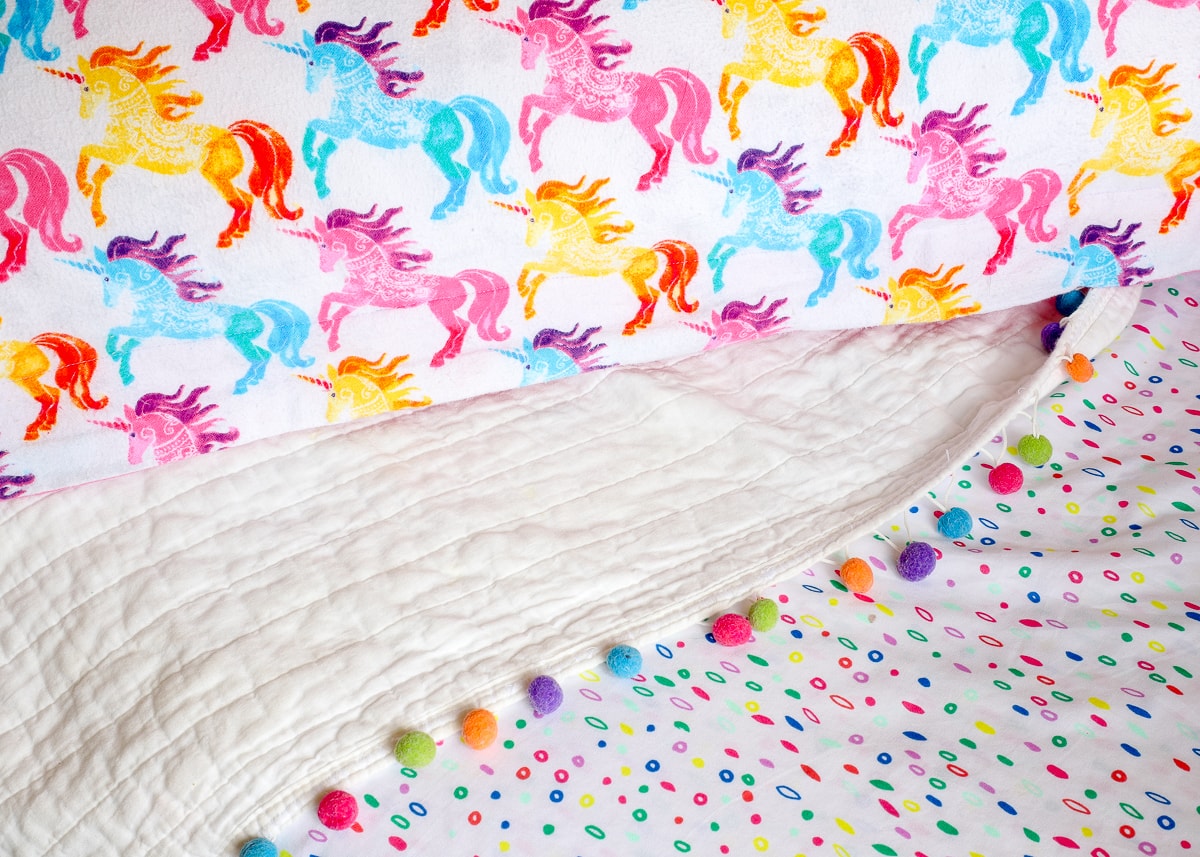 Some simple Target sheets + rainbow pom-pom trim + rainbow unicorn flannel (for the sham) ended up being a pretty magical combination! 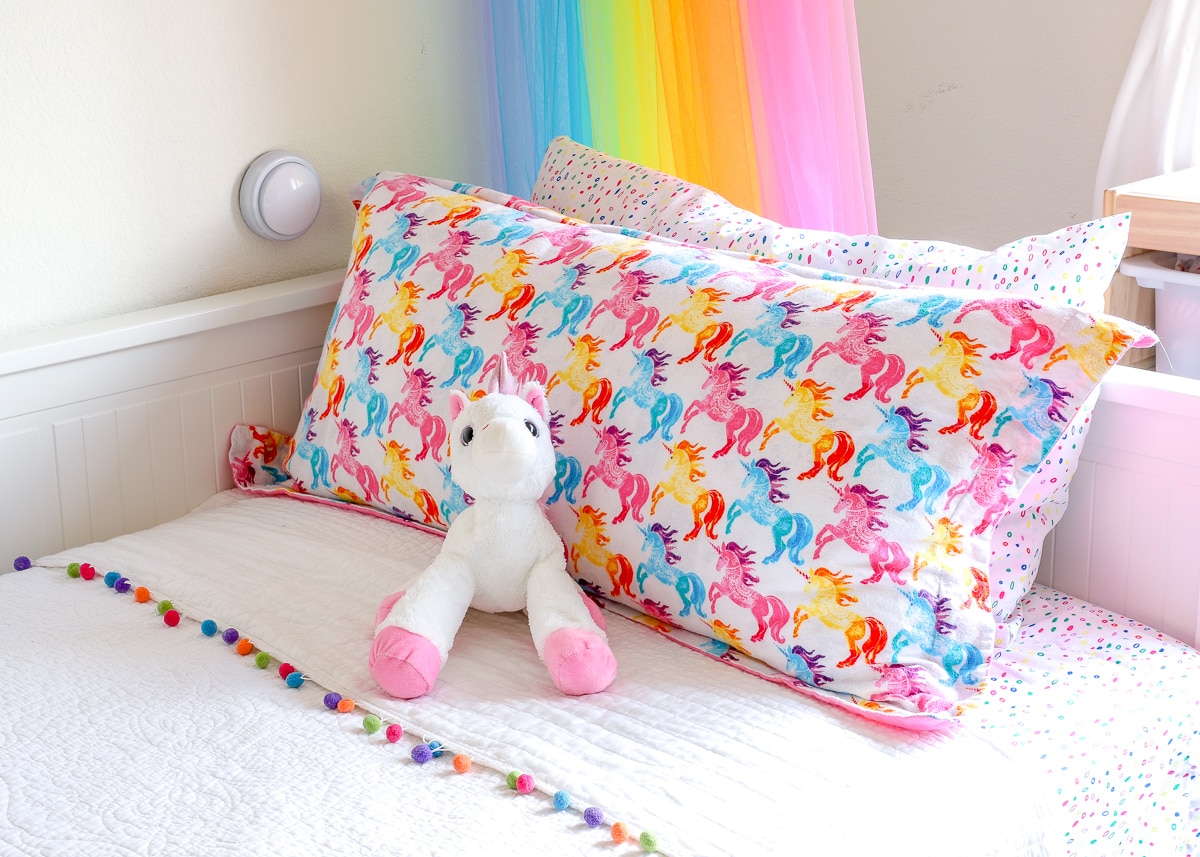 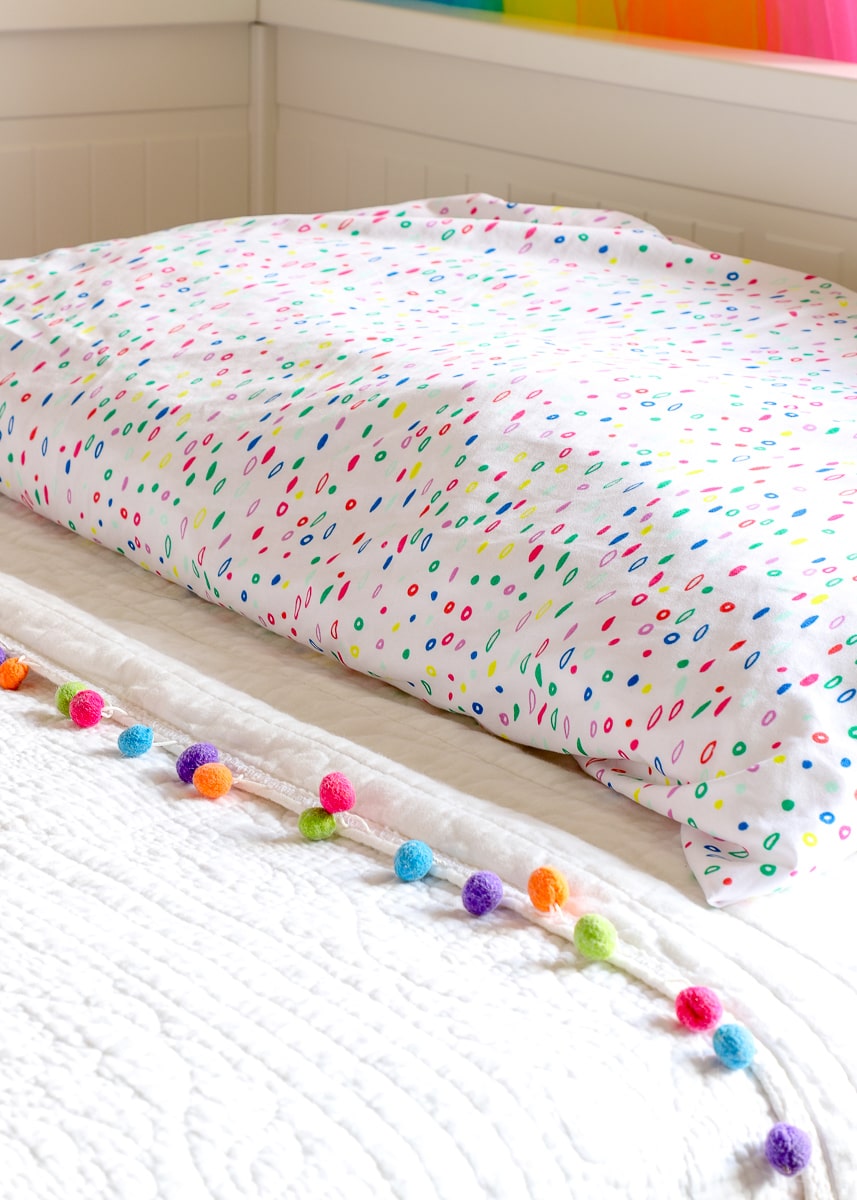 …but if her daughter suddenly wants a different theme, it’s a matter of swapping out the pillow sham and a few themed accessories. This rainbow unicorn bedroom could quite easily (and affordably!) become a mermaid room or princess room down the road! 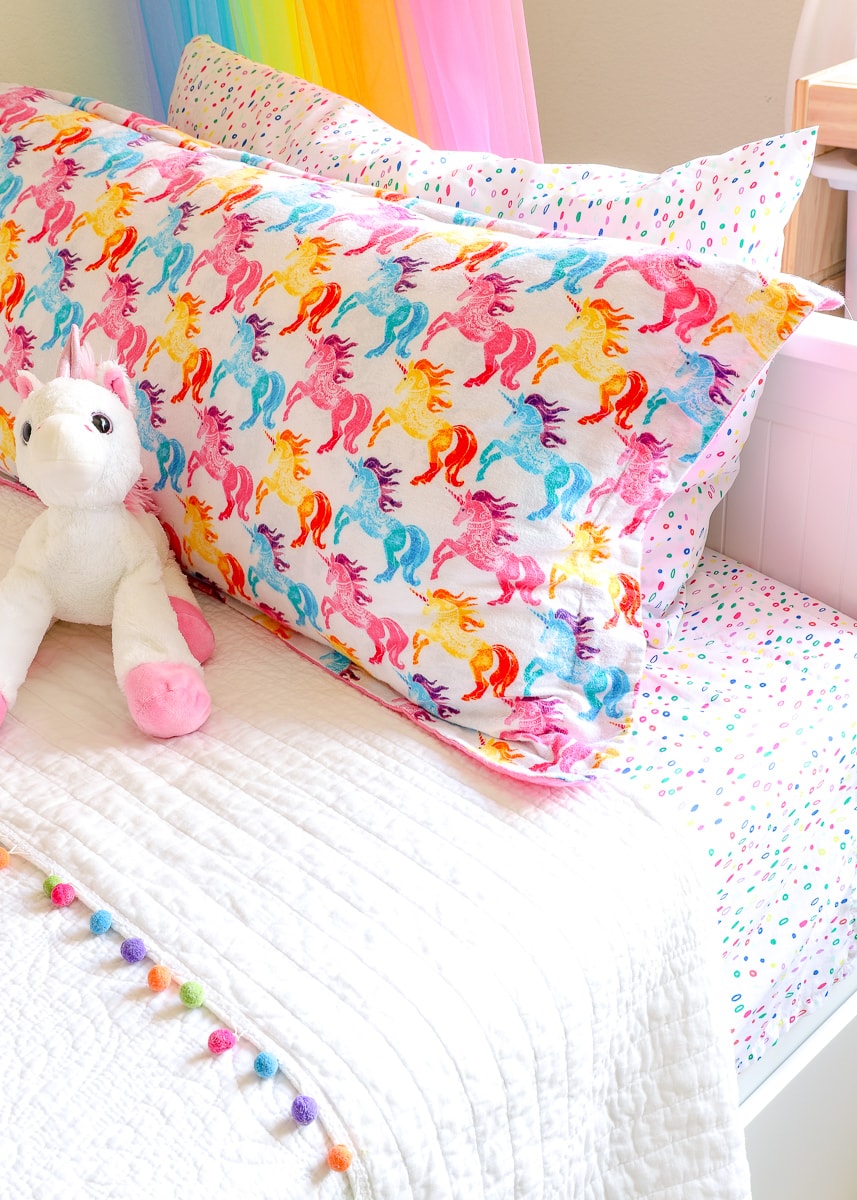 Oh! And if you’re concerned that an all-white bed with just some colorful sheets and tiny pom-poms will look too bland or boring, I think you will actually find the opposite to be true. In my experience, this neutral (yet well coordinated) backdrop will actually give you more freedom to bring color, pattern and designs into the room in other (more impactful) ways! In fact, it’s the white bed+bedding that really allows the rainbow canopy over the bed to be the true star of this whole room! 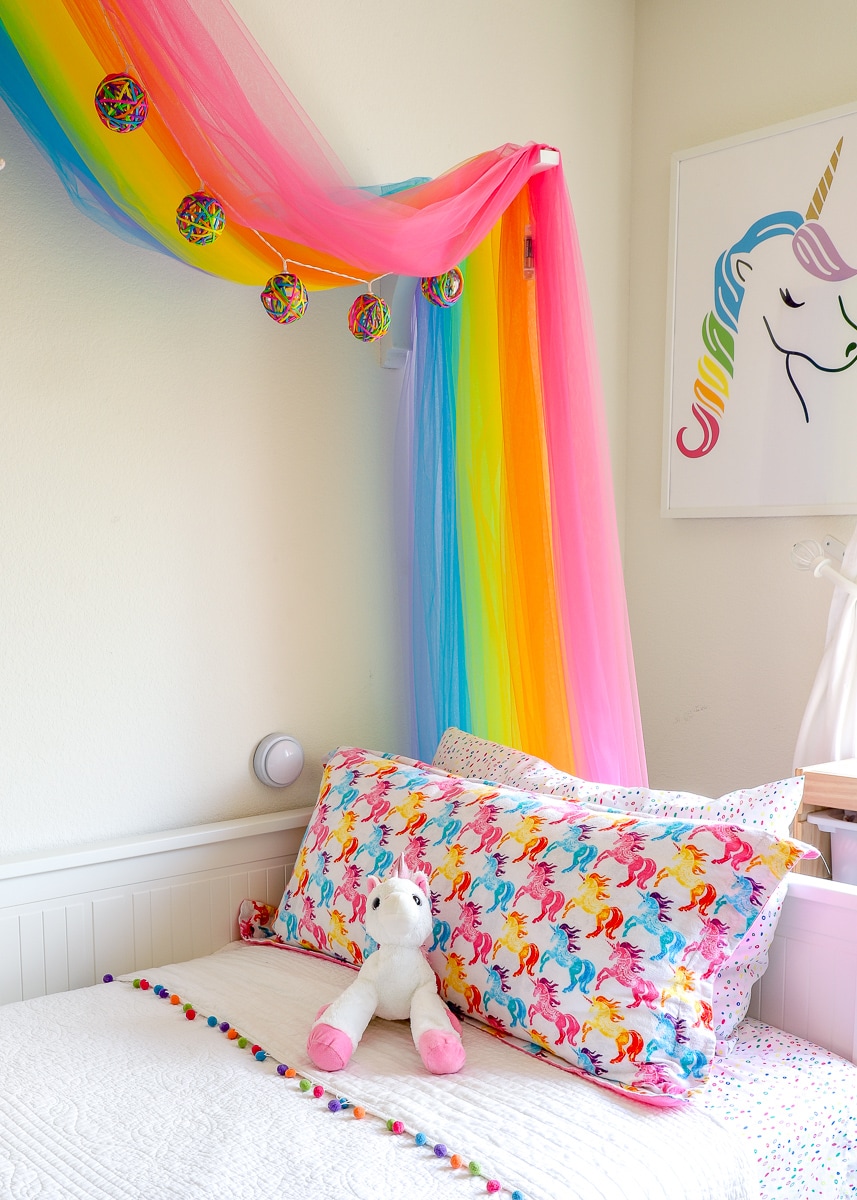 You guys know that playing with patterns and picking out bedding combinations is one of my favorite things ever, so I couldn’t just stop there! Nope – I dove deep into the bedding section at Target to pull together all sorts of examples on how you can bring this concept to life in your own home, no matter what colors or theme you are implementing. Check out all these fun combos below!

I chose to trim Henry’s coverlet in black pom-poms because it seemed the safest and most neutral option, especially for a boy’s room. It’s certainly proved a great choice over the years since it coordinates with practically anything (even really colorful sheets) and would work well for both boy and girl rooms alike! 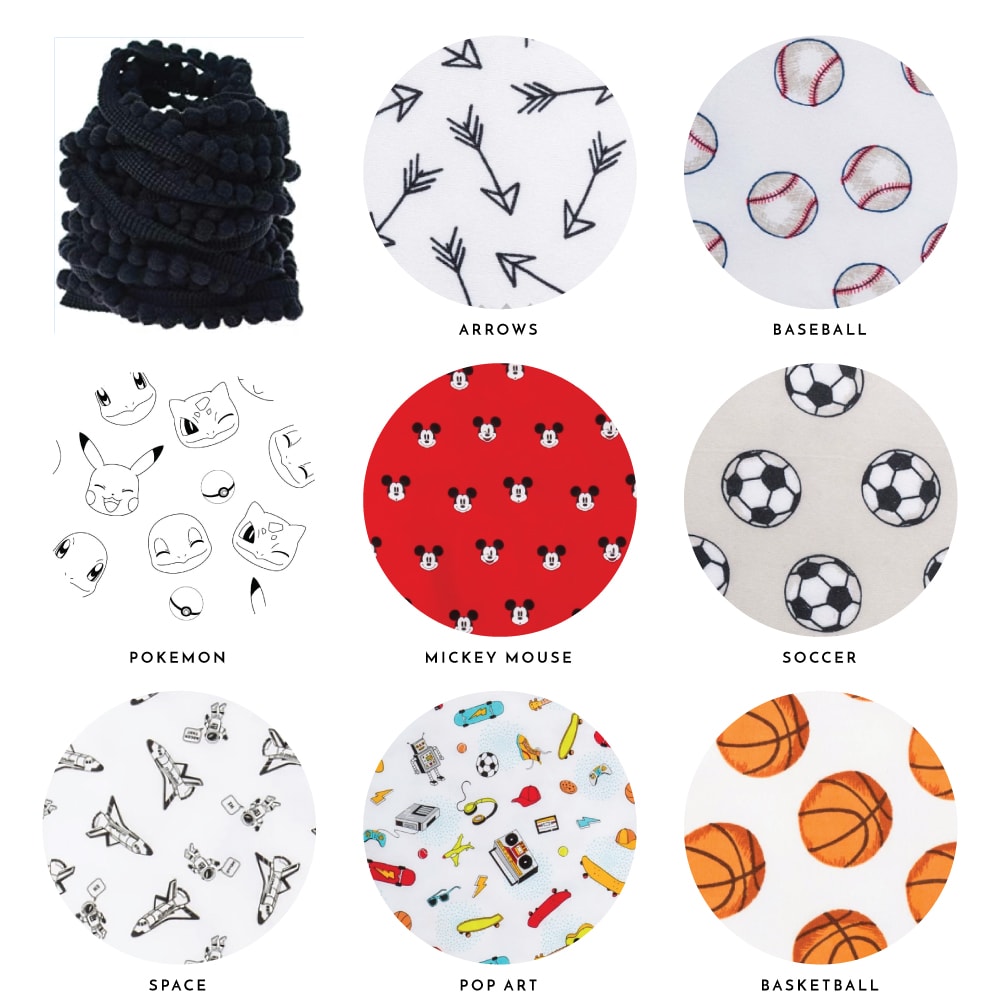 I am actually getting ready to trim out our third coverlet in navy pom-poms for Sam’s new room (design plan coming soon!). I currently have plans to pair it with some star sheets, but no matter which theme we embrace down the road as he gets older, we’ll have lots of great options since navy is a pretty common denominator! 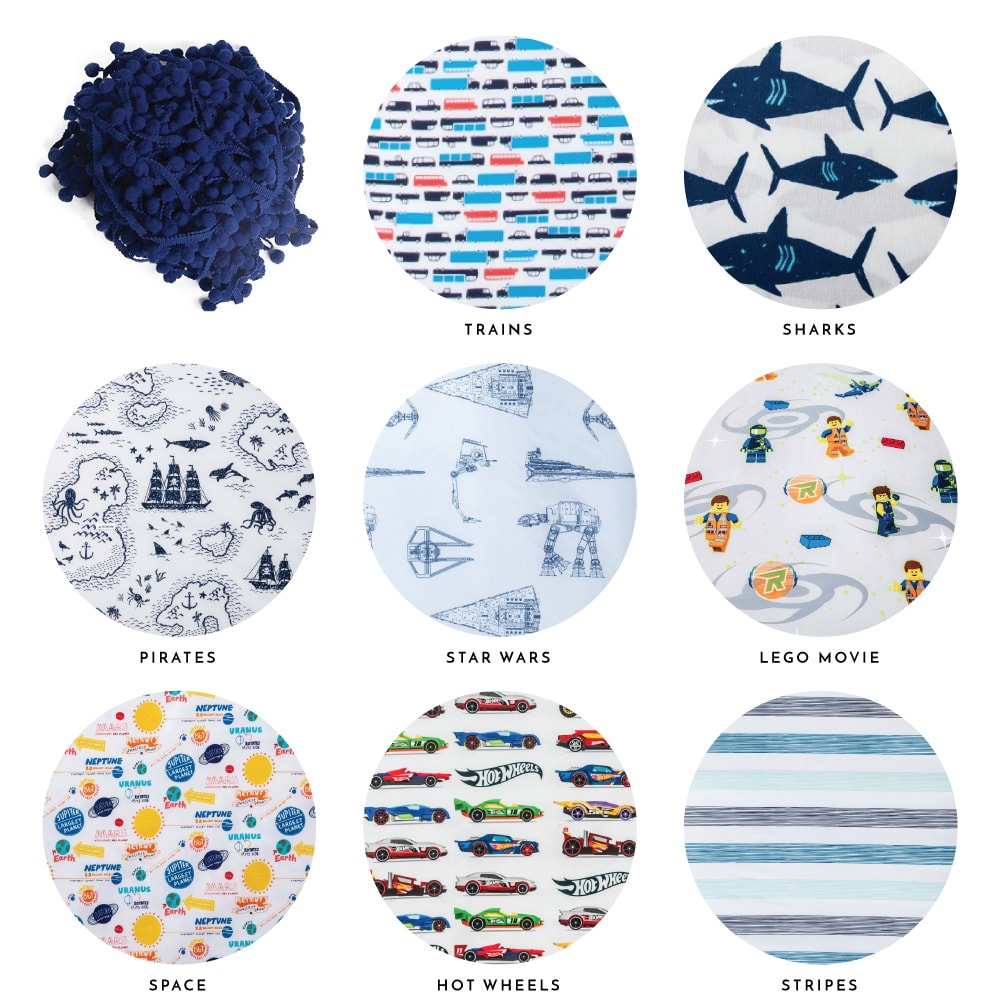 I am smitten with this ombre green pom-pom trim and think it would look darling on a bed in either a girl’s or boy’s room! Being a primary color, you’ll likely be able to pair it with younger themes (e.g., Sesame Street) and mature it as time goes on. Side Note: these Snug as a Bug sheets are some of the cutest I came across for this project and sorta wish I had a little girl’s room to use them on! 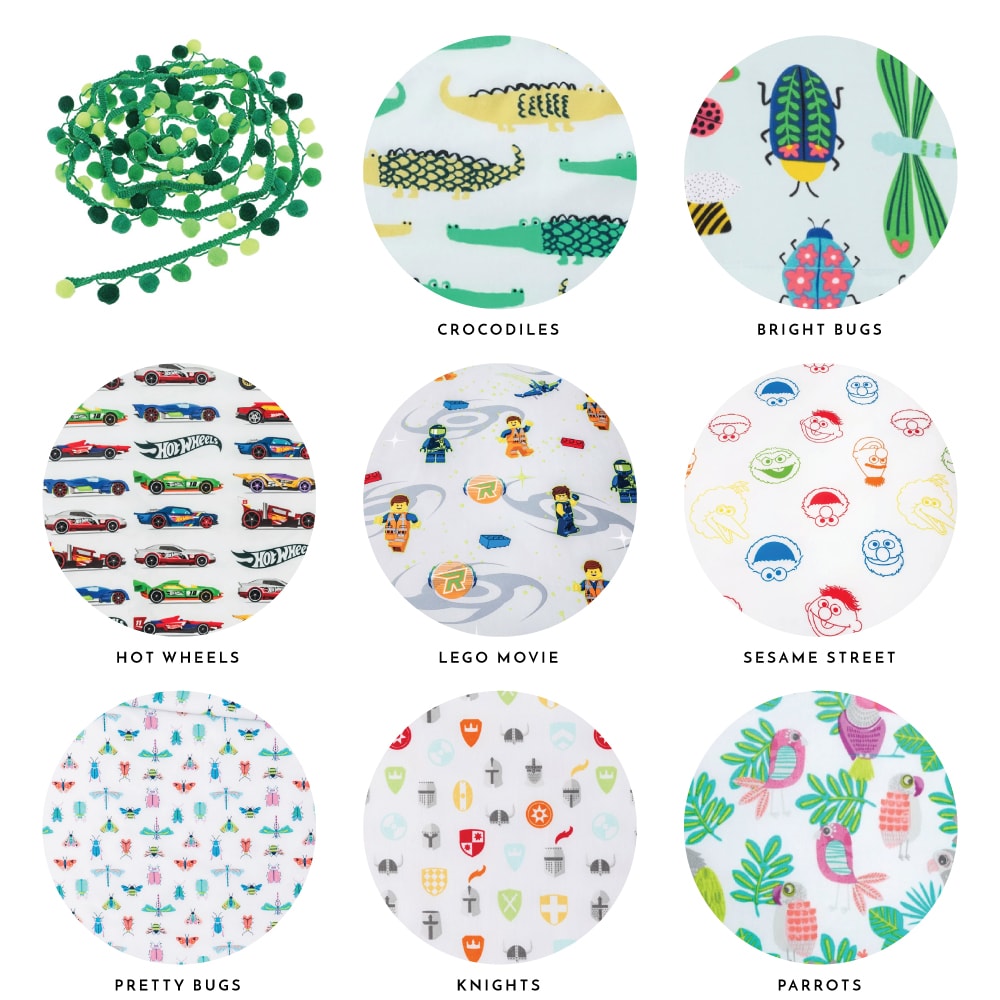 You may have a little one begging for a purple room, and that might seem like a scary commitment. But by combining this ombre purple pom-pom trim with a white bedspread, you’ll surely have lots of sheet paring options that cover a wide variety of interests throughout the years! 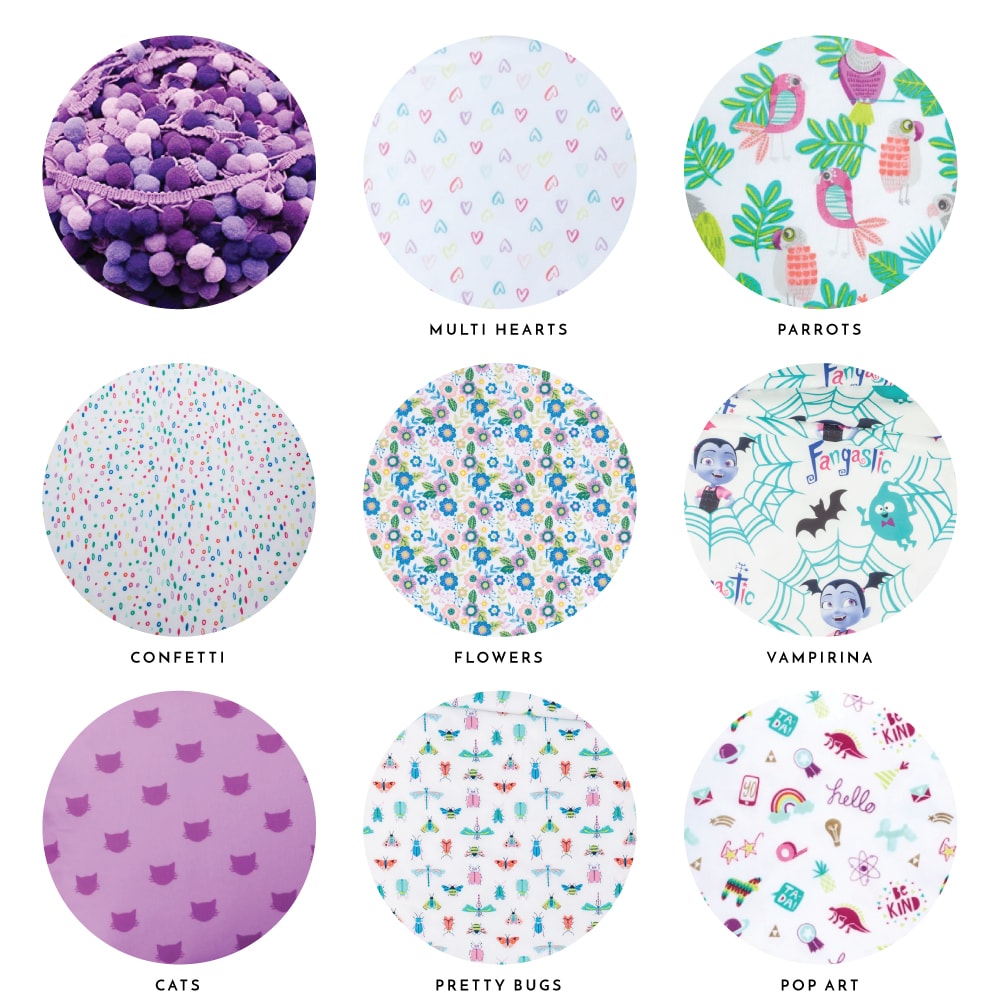 If you’re doing a little girl’s room, trimming out a coverlet in either purple or pink pom-poms is likely a safe choice! No matter what your little one is into, you’ll be sure to find plenty of coordinating options as she grows! 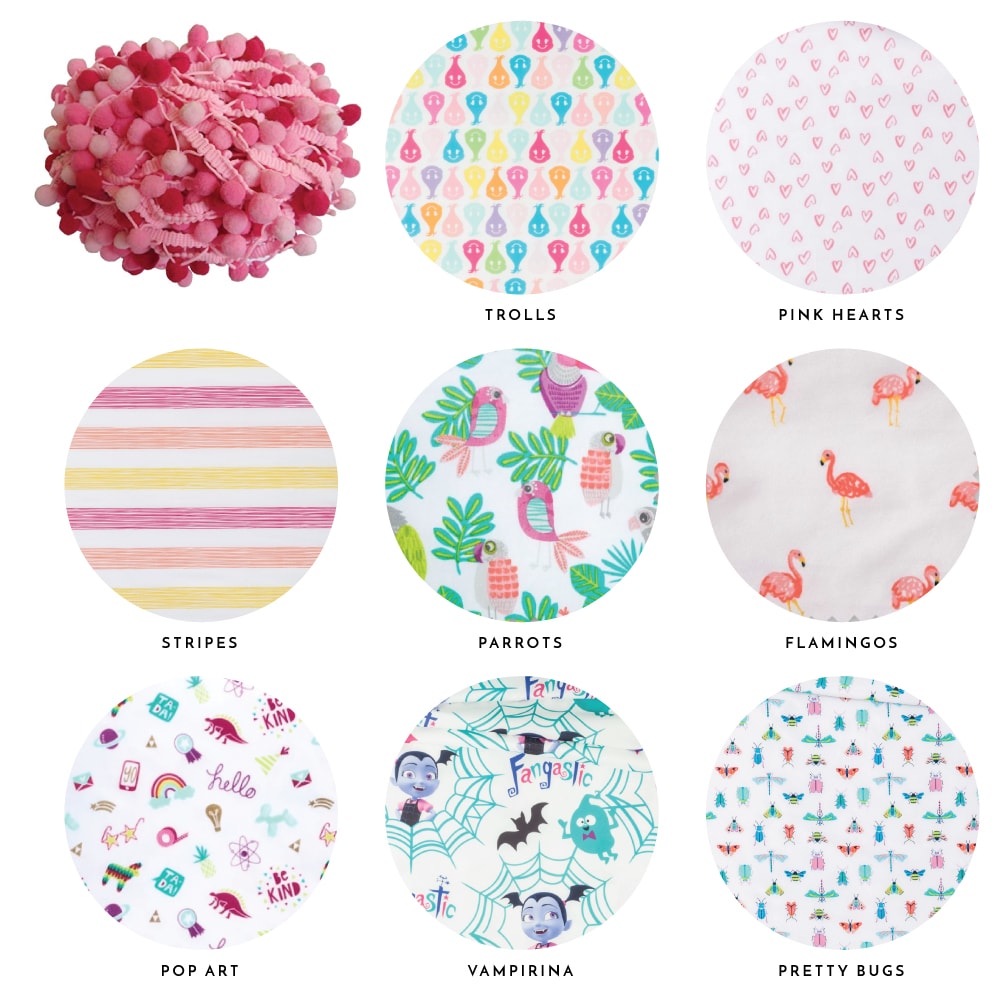 Admittedly, I’m totally smitten with this red pom-pom trim and these sheet options. So much that’s it’s almost making me re-think Sam’s bedroom plan (almost!) I think red is another great option for either boys and girls, and can also likely transition easily as kids grow and interests evolve. Side Note: For all of you who loved the dragon artwork I shared a few weeks ago…you have to check out these dragon sheets, they are just the cutest!!! 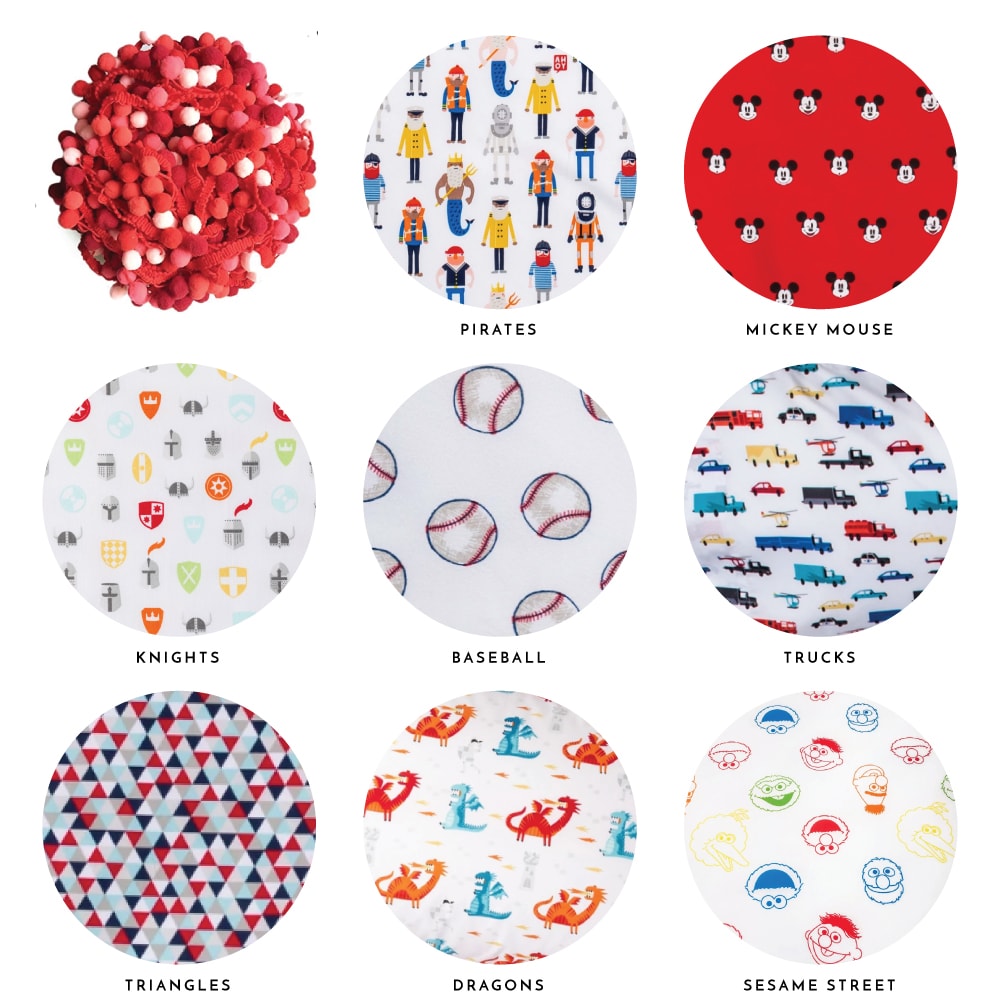 This lighter blue set, like the navy, is also very versatile. It certainly works in boy spaces, but it’s an especially great choice for girl’s who really don’t want pink or purple! I can just see those cute bicycle sheets with the blue pom-poms and a bright yellow sham! #swoon 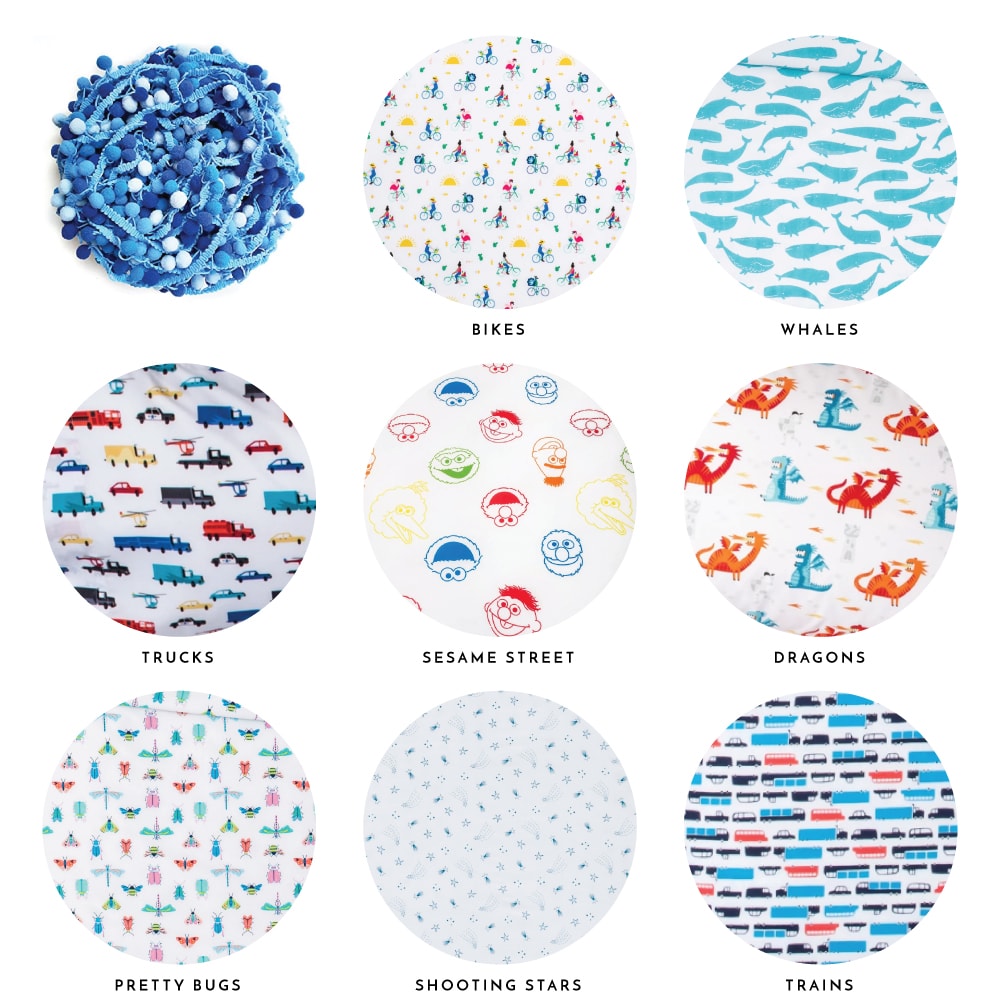 A quick search for pom-pom trim will not only yield results in every color imaginable, but also different multi-color options. Although these may seem a bit limiting in their palette, you might be surprised at how much can go with them!

For example, your young one might go through a strong Trolls or Vampirina phase but then become a die-hard basketball player! This single bedspread would work through all those whims! 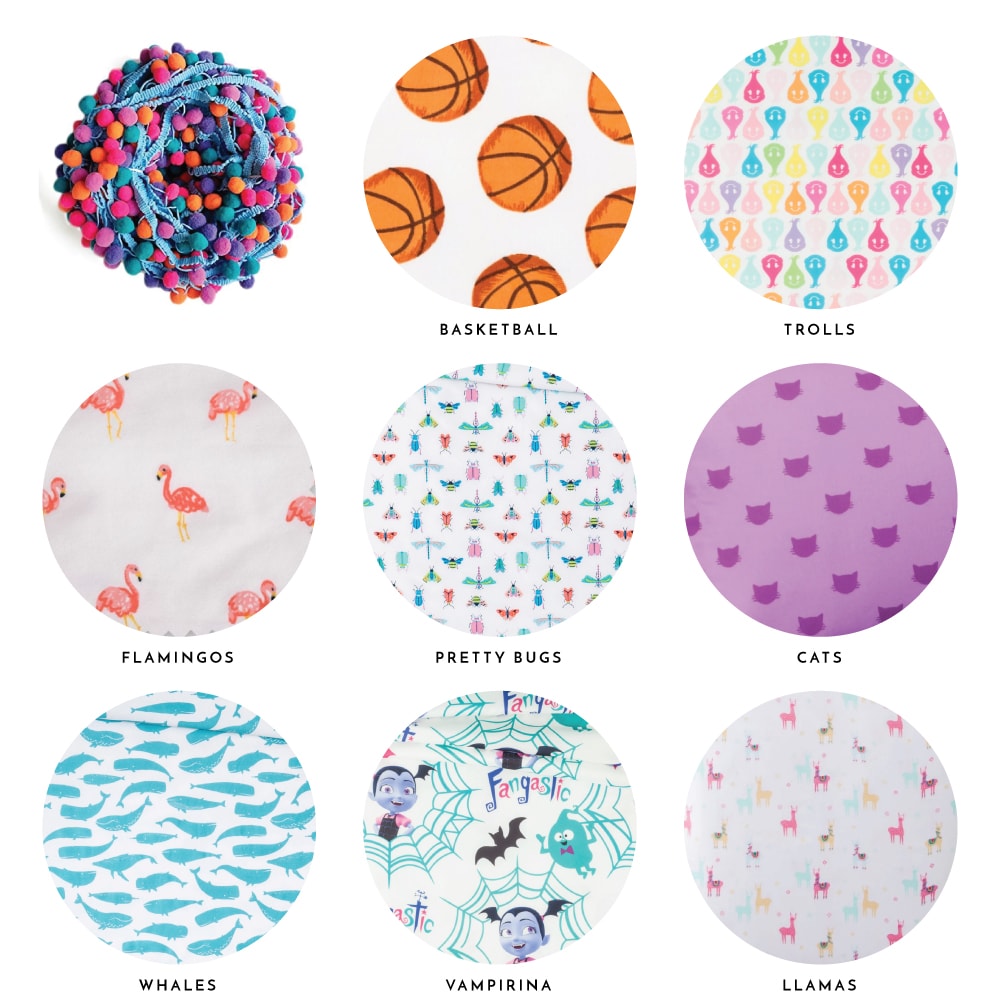 Below is the trim we used in my girlfriend’s daughter’s room. After we selected it, we were shocked at how much we found to coordinate with it (accessories, fabric, etc). 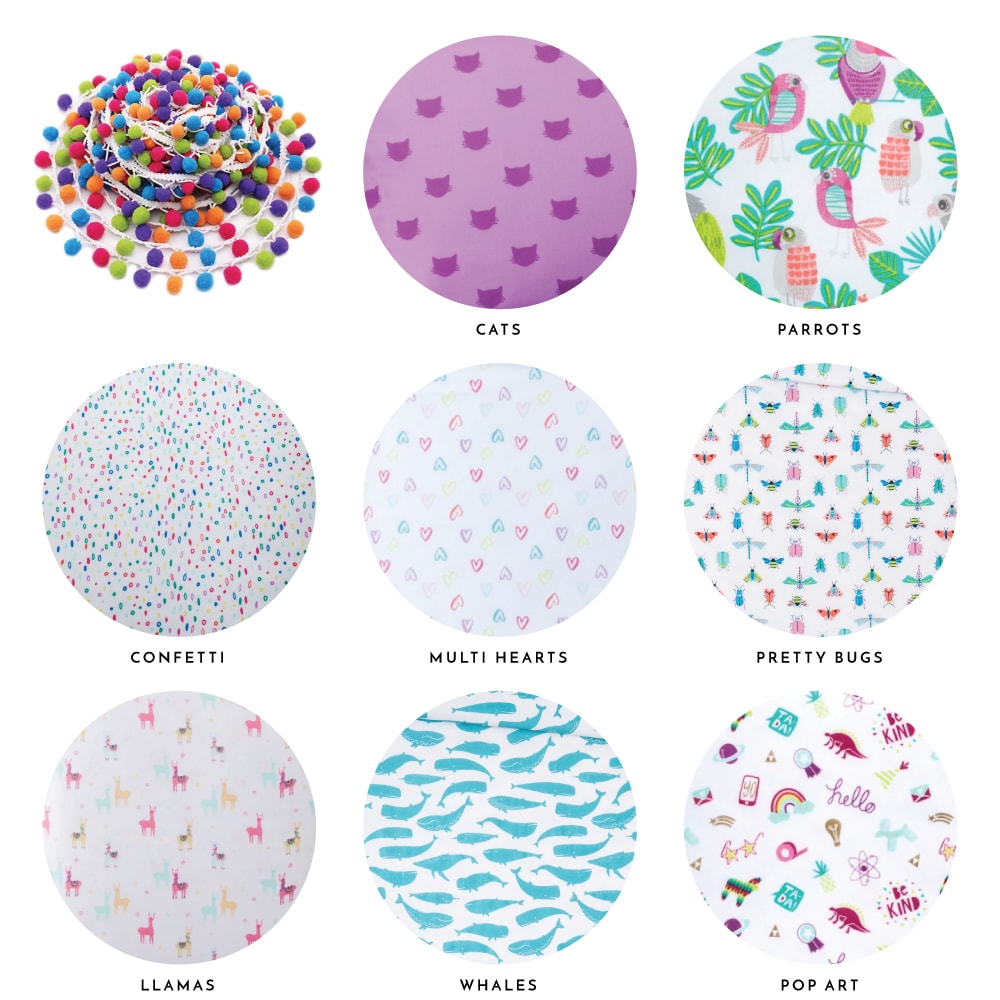 Don’t feel like you need to coordinate with each and every color in the pom-poms either. Even by selecting out one color, you’ll still end up with a really cohensive display. 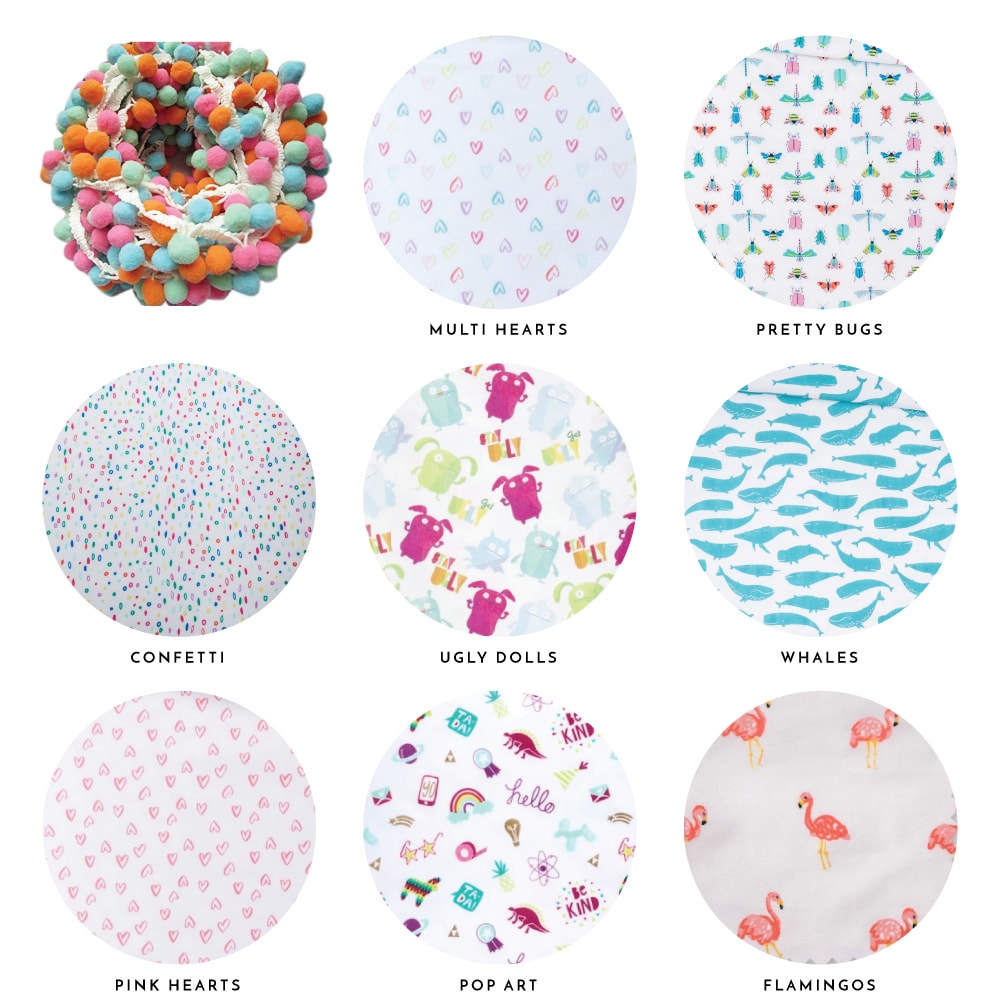 It’s Easier Than You Think!

I’ve presented a lot of ideas and options here, so you  might be somewhat overwhelmed by this whole concept. A complete bedding set might be sounding pretty good after all. Don’t be scared, though! I promise pulling this kind of bedding solution together is easier than you think!

I suggest starting with a white coverlet to keep your bedspread as versatile as possible. I’ve bought all three of the ones in our home at HomeGoods/TJMaxx/Marshalls pretty affordably, but you can also find them at Target, Amazon, etc. Although the initial cost for a coverlet may be more than a traditional comforter set, consider the long-term use and versatility you’ll get out of it!

Next, pick out your theme and/or color palette and then start searching for some sheets and throw pillows/theme fabric that work well together. Finish by selecting some pom-pom trim that coordinates with everything you’ve picked out. Since pom-pom trim now comes in pretty much any color (or array of colors) you can think of, you will easily be able to settle on a trim + sheets + throw pillow combo you love!

Your last task (before making the bed, of course!) is to secure the pom-pom trim to the coverlet. I promise you this is MUCH easier than it sounds; and even if you are a novice sewer, this is something you can do! Pom-pom trim typically comes in 5-10+ yard rolls. It’s really affordable and really easy to sew on – see my full tutorial here. Oh! And if you have tons leftover, consider sewing the trim onto curtains or a valance to create coordinating window treatments and bring the whole space together! 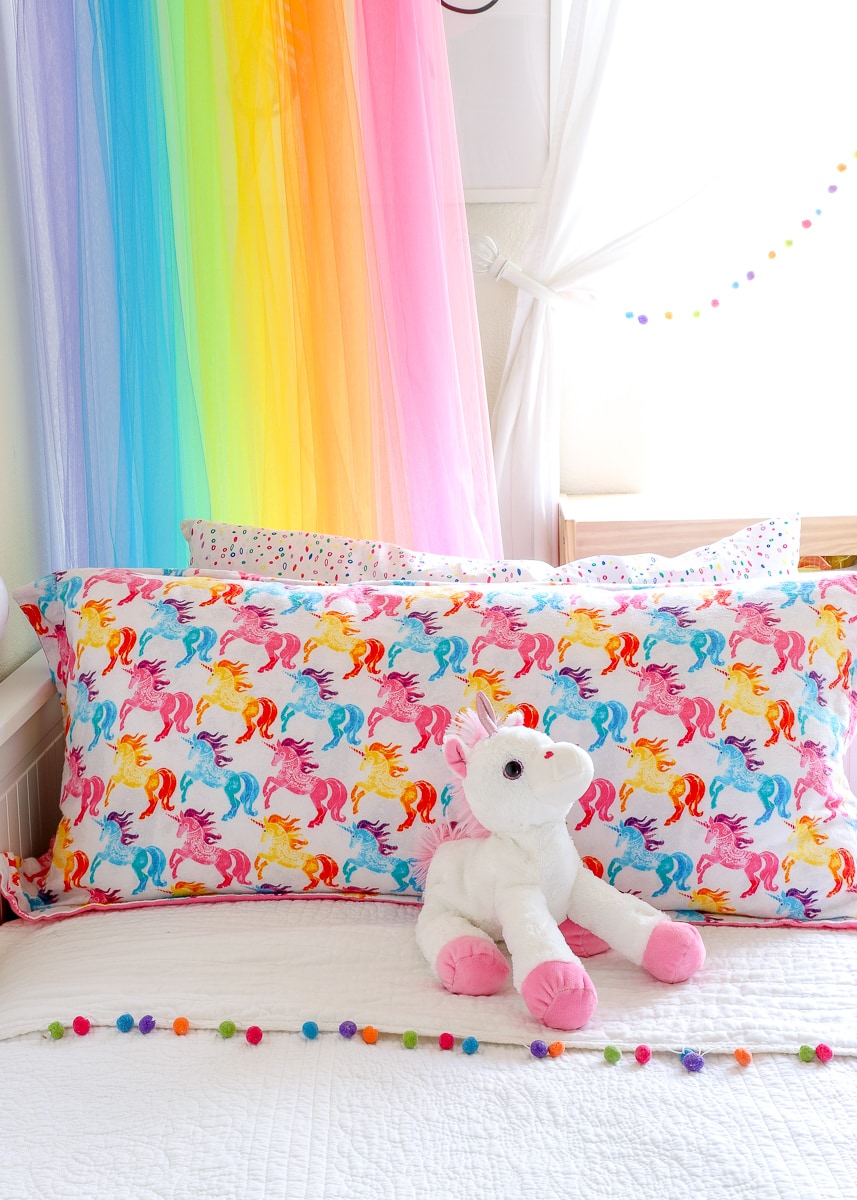 This fail-proof combo has worked for me time and time again, and I plan to continue to implement into future bedroom makeovers that I do. Not only is this method super affordable and produces really great looking results, but it’s easily changed as tastes evolve. Whether it’s for your own bedroom space or that of a child’s, give it a try! I think you’ll really love this effective method for getting a “collected”/curated look without a ton of effort! 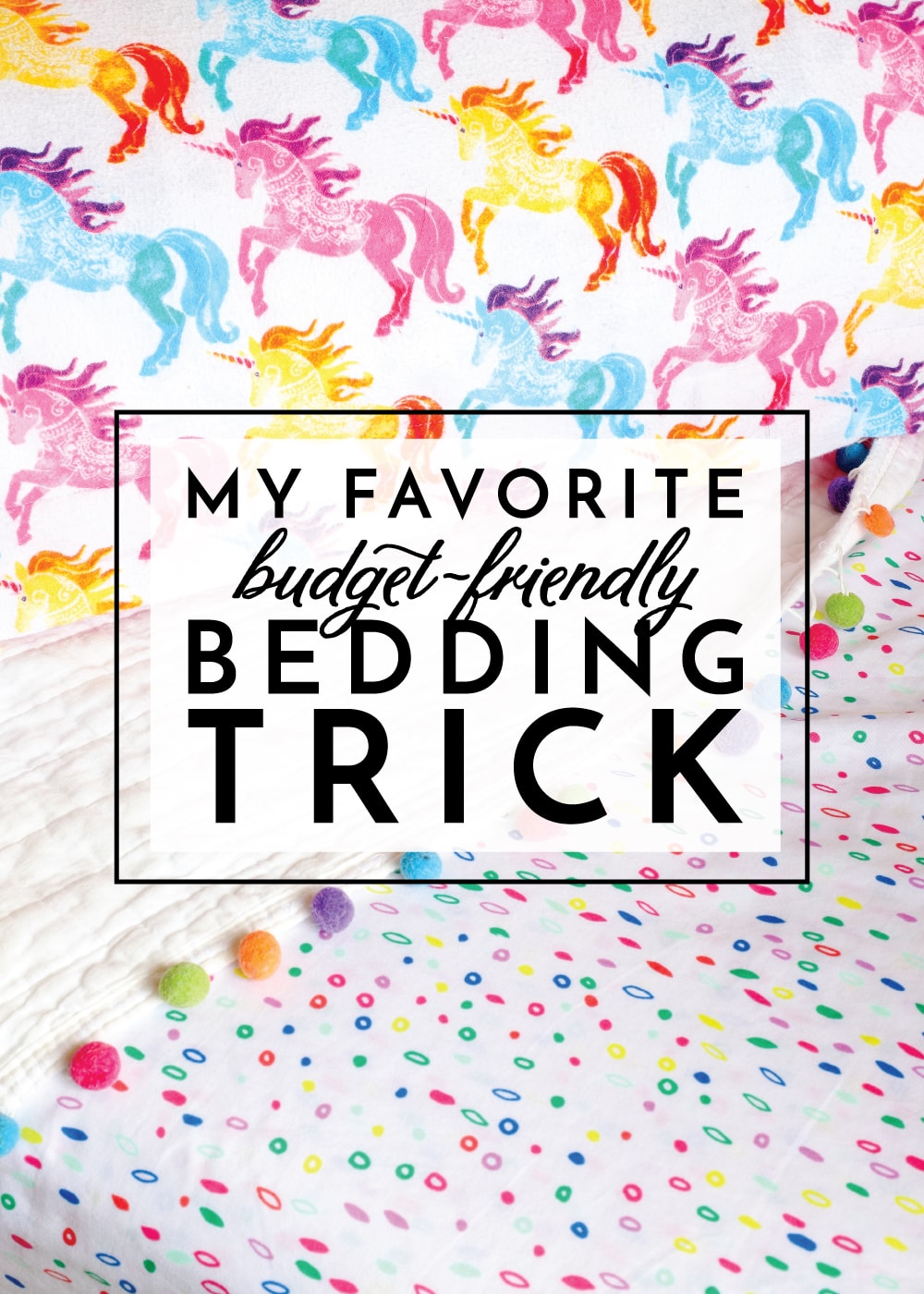 See You Soon!
Megan
« Previous PostHow to Print Photos Onto Post-It Notes
Next Post » How to Use Cricut Pens | A Comprehensive Guide