posted by Megan on May 16, 2017 This post may contain affiliate links.

A few weeks ago, we celebrated Henry’s 6th birthday! Over the years, I’ve been known to do some pretty extravagant birthday parties (Monsters, Cars, VeggieTales, Planes, and Ninja Turtles). But because of lots of different reasons (mostly, the arrival of Sam), we decided to keep things relatively easy this year and do a party with a few of his favorite friends at the bowling alley (this kid LOVES to bowl!) Even though the bowling alley was taking care of pretty much everything, I couldn’t resist doing a few little projects to celebrate our big boy. Not only do I really, really love making party decor, but Henry also enjoys seeing what I can do to bring his favorite characters to life. Henry’s choice of theme this year was Ninjago…and it’s a good thing I’m pretty crafty because Ninjago party decor can be hard to find. I don’t have any pictures of the party itself this year (because it was a total whirlwind), but I wanted to share these decor ideas in case you or someone you know wants to throw a Ninjago party too! 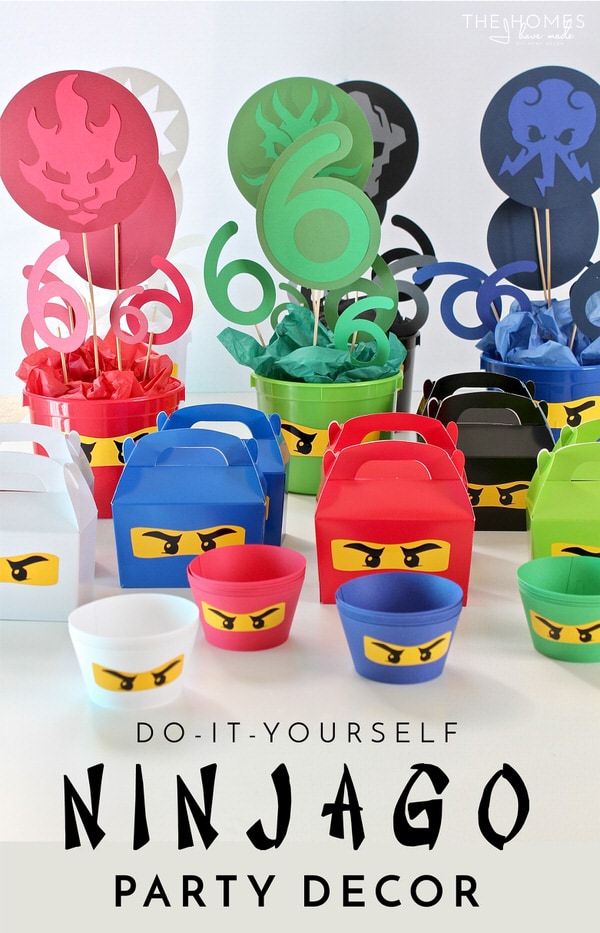 The few projects I did make may seem like a lot; but compared to my usual shenanigans, this one was pretty low-key. We made invitations, table centerpieces, cupcake wrappers, balloons and favor boxes. And all of it was done with just some black and yellow vinyl and various colors of cardstock I had on hand. The projects took me about a day to pull together, and Henry even helped with a lot of it (he likes to run my Cricut machine!) 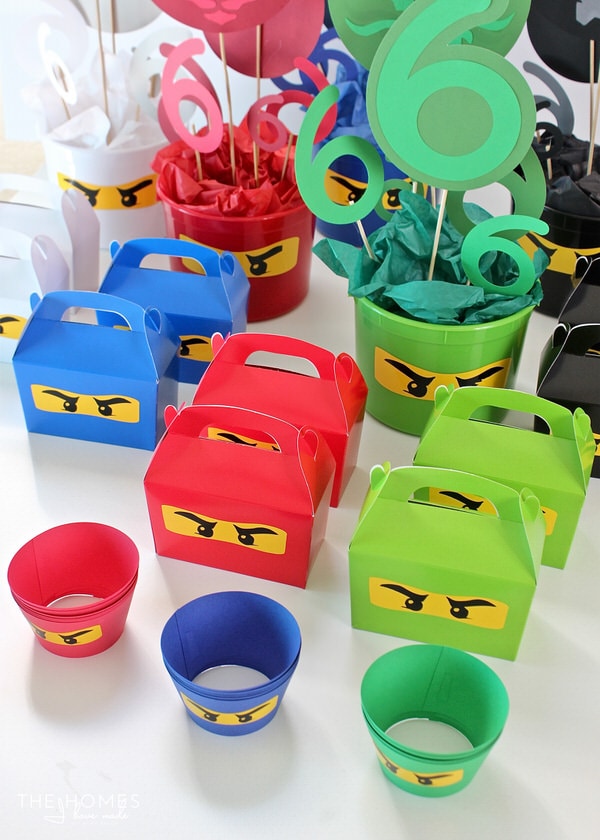 Henry had a tough time this year choosing between Mario Brothers and Ninjago. I was pretty excited when he chose Ninjago because although you can’t find much store-bought stuff, I was able to make pretty much everything you see in this post using this single image I found online (below). Simply by cropping it down or using various parts of it (i.e., the eyes), I was able to make all the different Ninjas and all the different projects with a single cut file and various colors of cardstock, buckets, balloons, and boxes! (You can learn more about getting this graphic and uploading it to Cricut Design Space here.) 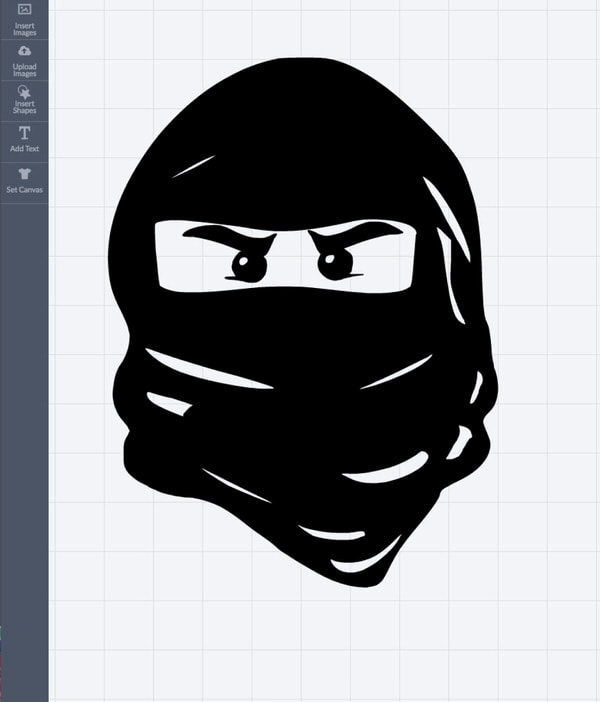 For the invites, I essentially cropped the image you see above into a rectangle, layered it over a yellow rectangle, and then colored them to represent the five different Ninjas… 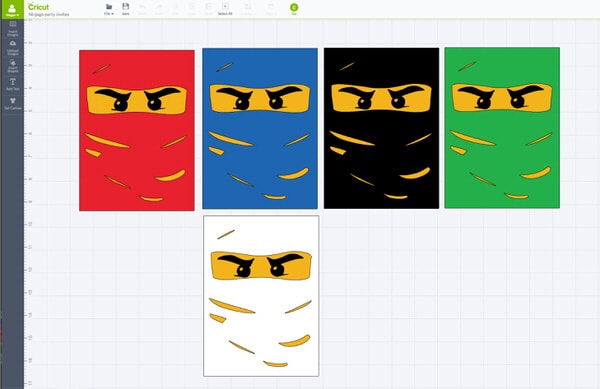 The yellow cuts were plain on one side (to peek through the Ninja masks) but had all the party details on the other. Henry loved picking out which Ninja would be given to each friend!

You can now see the full invitation tutorial here!

Another great aspect of the Ninjago theme is that you can buy/make various party decor (i.e., boxes, buckets, cupcake liners, and more!) in all the Ninja colors (red, blue, green, black, and red) and then just make eyes to attach to everything. We cut lots and lots and lots of eyes for these projects, in all sorts of sizes.

My best tip for details like this: cut both the yellow and black from vinyl to essentially make big eye stickers. Not only does it look a little nicer, but it makes attaching the eyes to everything super quick and easy. No glue needed, just peel and stick! 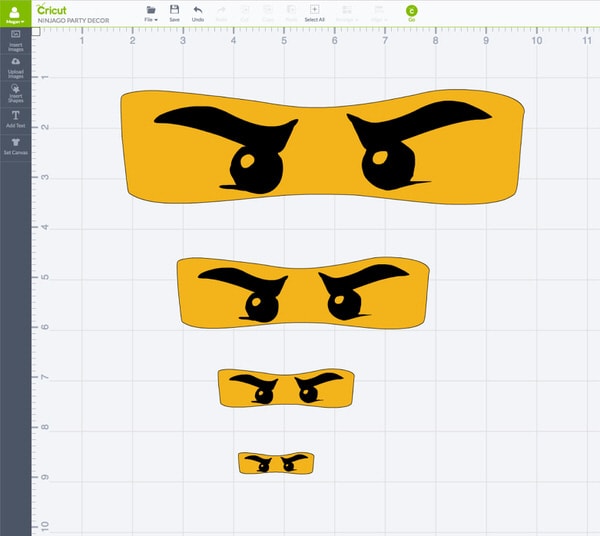 I cut 4″ wide eyes for the favor boxes, and Henry had a blast picking out and filling them up with all sorts of  toys from the party store. The kids also loved picking out which Ninja they wanted to take home! 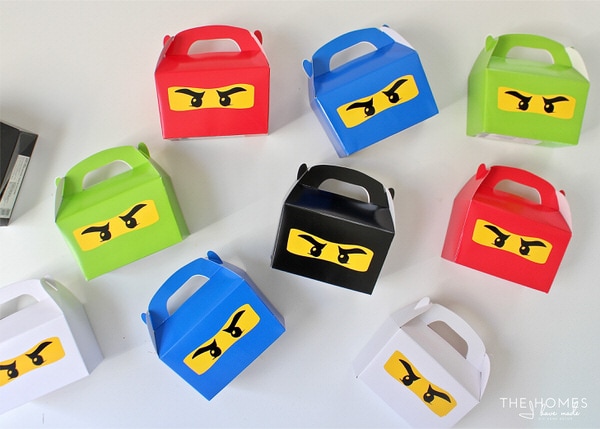 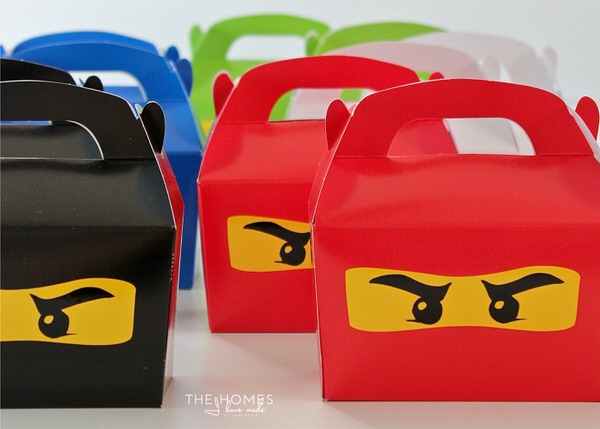 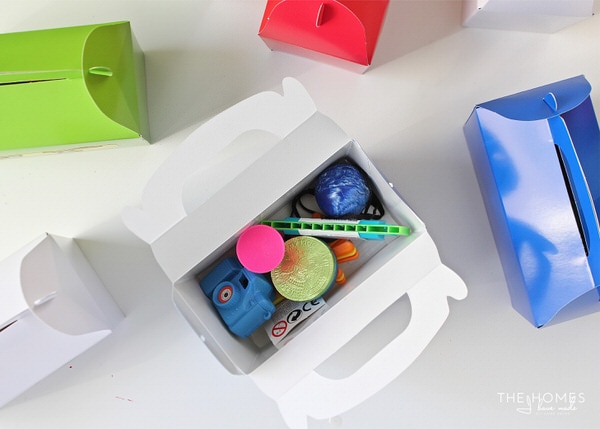 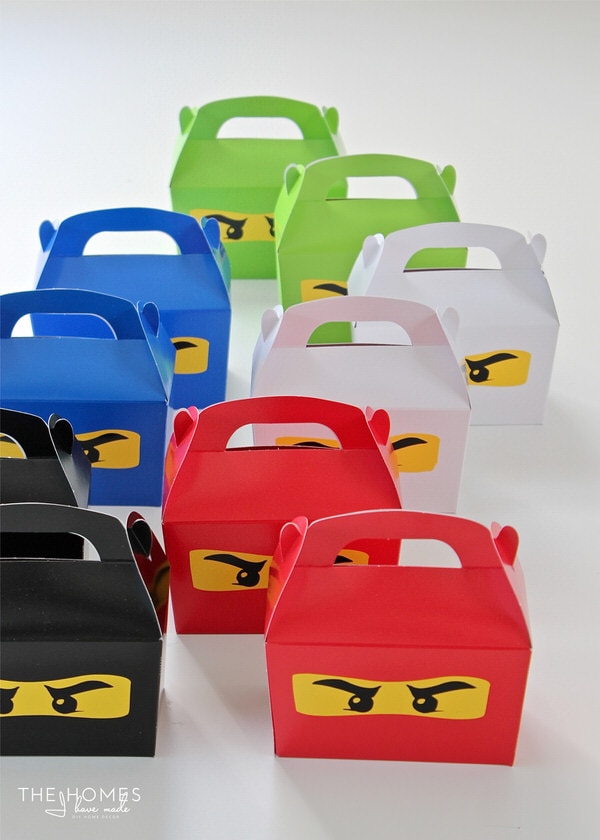 The cupcakes were easily my favorite detail of the whole party and were a huge hit with the kids too! 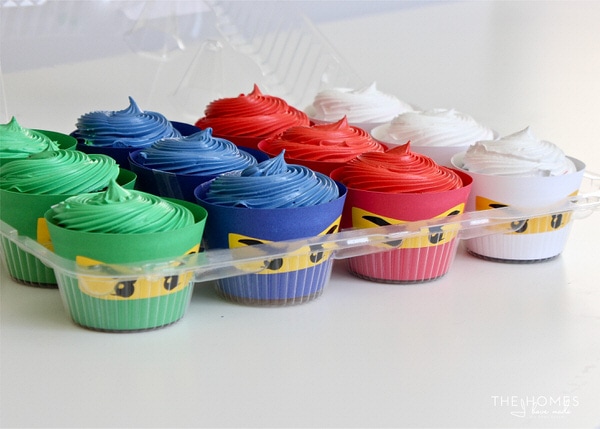 I simply cut basic cupcake wrappers from all the colors of cardstock and then attached more peel-and-stick eyes to each one. 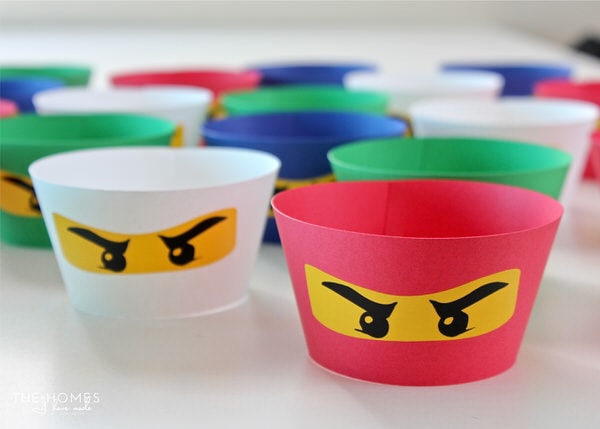 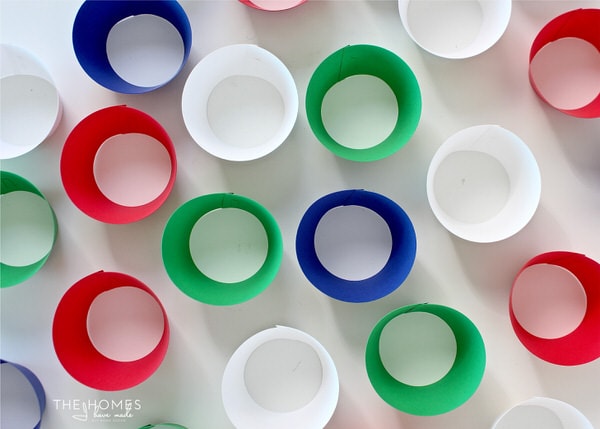 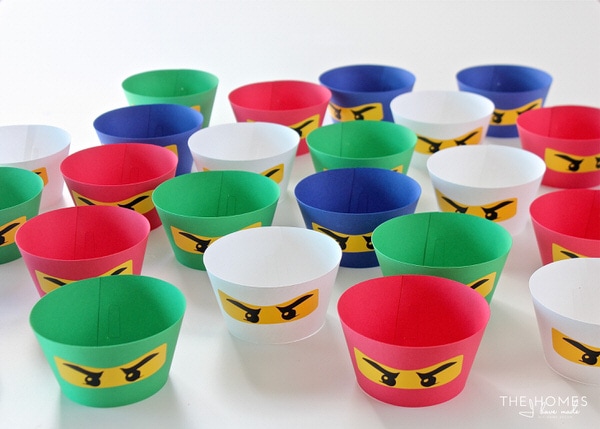 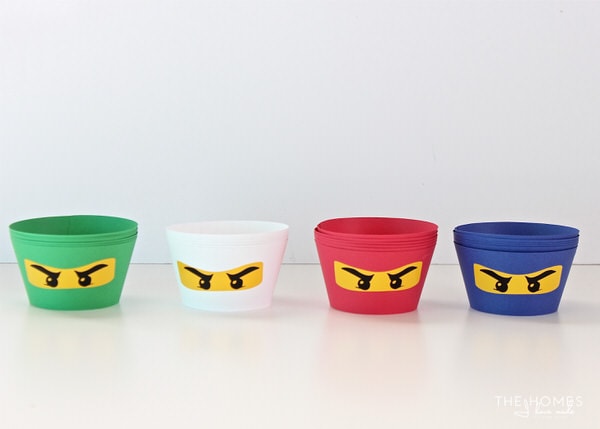 I then used one of my all-time favorite tricks for stress-free parties: order cupcakes from the store. Yes, I can make a box of cupcakes. But I’ve found I’d rather spend my time making decor than food, and the store does SUCH a better job. I mean…look at that pretty icing! 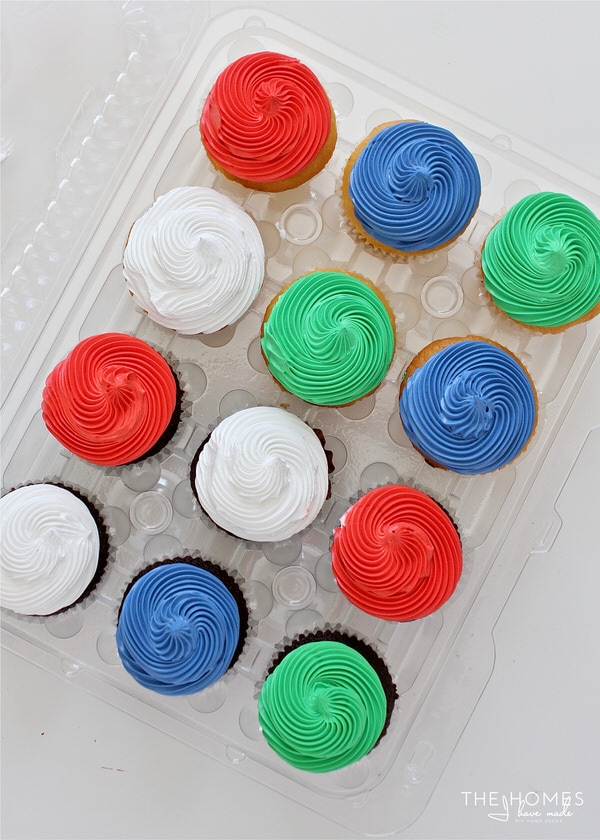 The whipped topping in all the Ninja colors (well…all except the black Ninja, Cole) was not only super yummy… 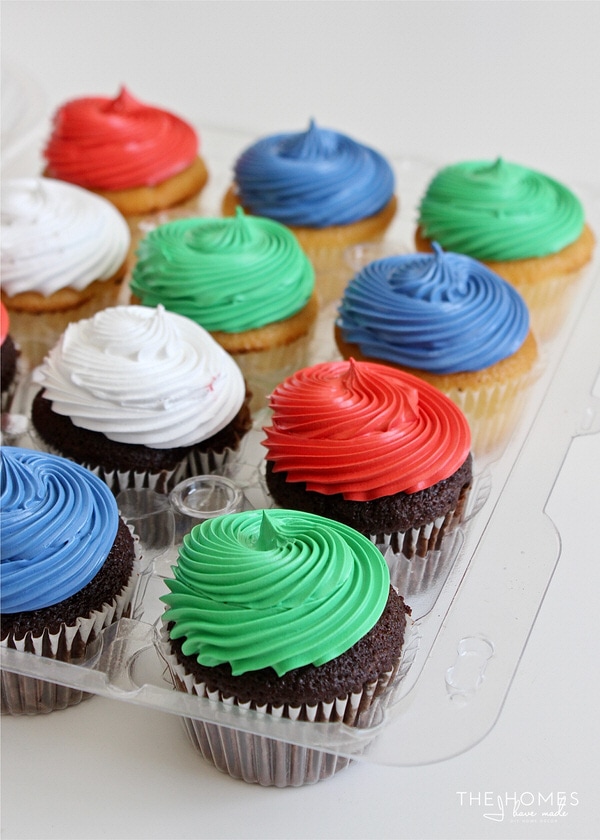 …but the thick, tall, pretty icing finished off the top of the hoods when placed into the Ninjago face wrappers! Ahhh…they were so stinkn’ cute, and the kids had quite the tough time picking out which Ninja they wanted at cake time! 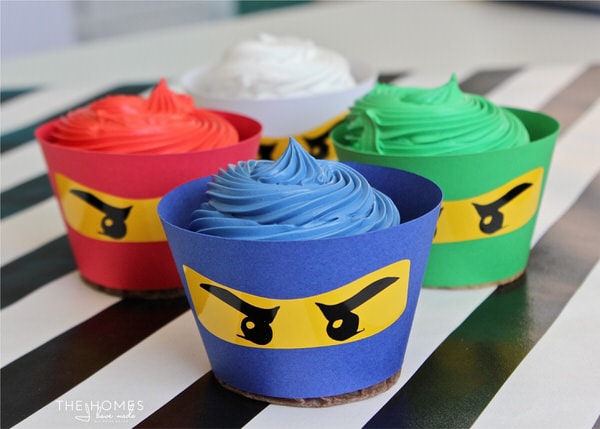 Tip: If you plan to do cupcake wrappers (for any party), I highly recommend you place the cupcakes into the wrappers before the party starts. It can be a little tricky/messy to get them in there, and I discovered I made my wrappers a little too big. It wasn’t anything a little scotch tape couldn’t fix, but I was sure glad I wasn’t adjusting everything at the bowling alley!

The balloons were another quick peel-and-stick project. While I was getting the cupcakes situation under control, Greg and Henry went to get the balloons (with instructions to get one of each Ninja color). More peel-and-stick eyes turned basic colored balloons into Ninjas! Originally, I planned to tie each balloon to a centerpiece. The balloon strings ended up all tangled, so we just tied them to the back of Henry’s chair! 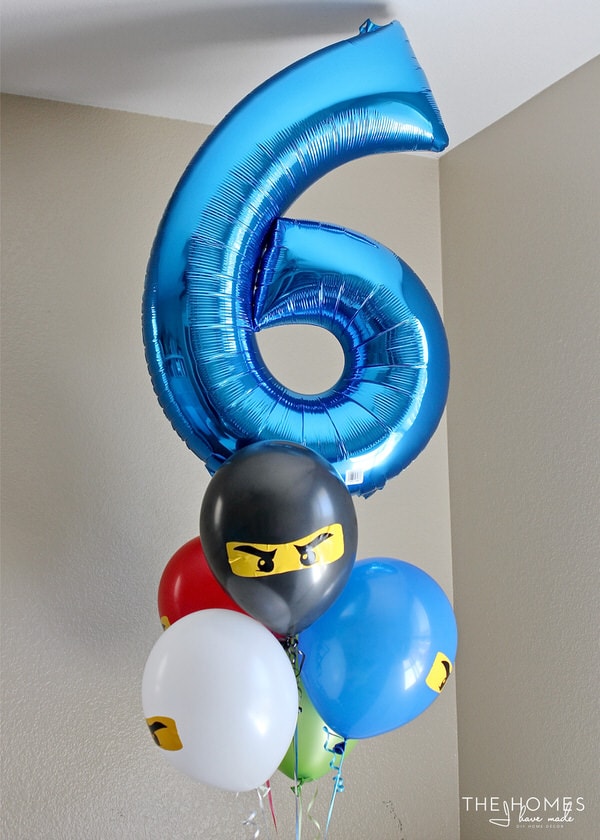 The last detail I made were some table centerpieces. 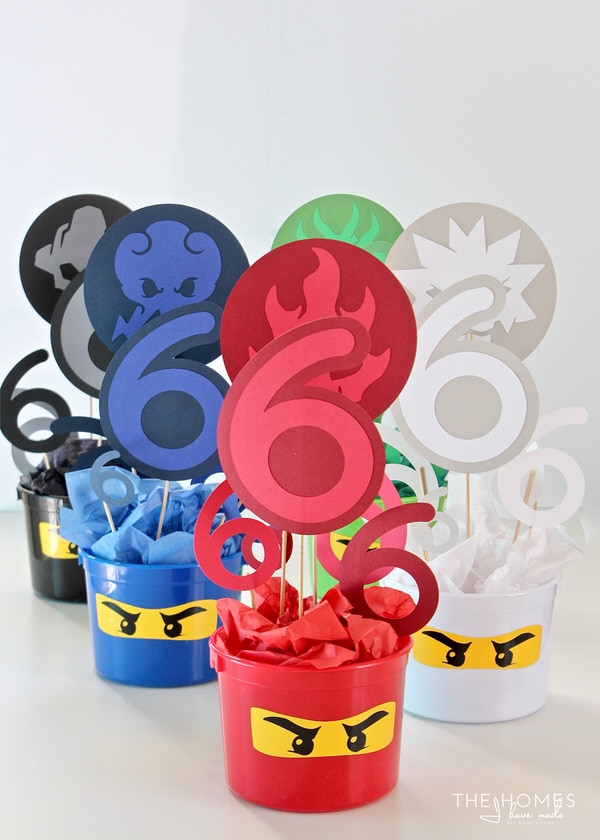 These were a really simple and fun way to bring our theme to the bowling alley, and Henry was pretty much beside himself that I made each Ninja’s symbol! These buckets were lightweight yet tall, so we could just plop them down on the tables and instantly have a Ninja-themed party! 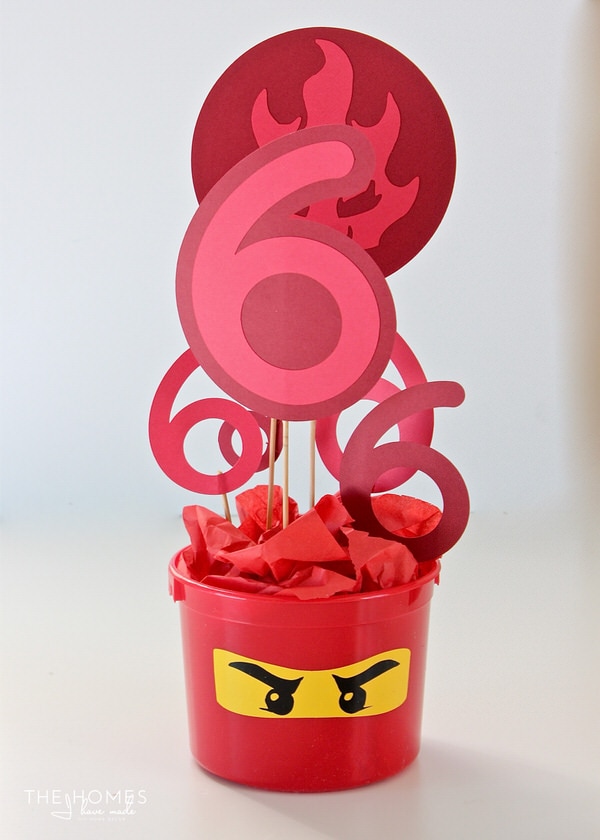 In addition to cutting even more vinyl eyes for all the colored buckets (also found at the party store), I hunted down the symbols of each Ninja using Google (This is the image I imported into Cricut Design Space to make all the symbol signs). I also cut a bunch of 6s in different colors to match… 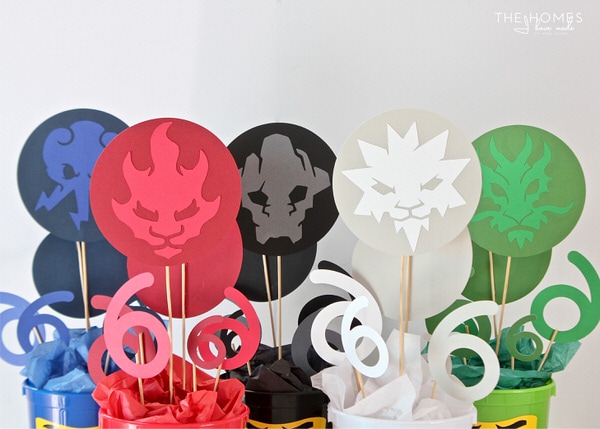 The symbols and sixes were hot-glued to wooden kabob skewers and then inserted into small squares of floral styrofoam at the bottom of each bucket. One piece of matching tissue paper stuffed in the top of the bucket concealed the foam and finished off the whole display! 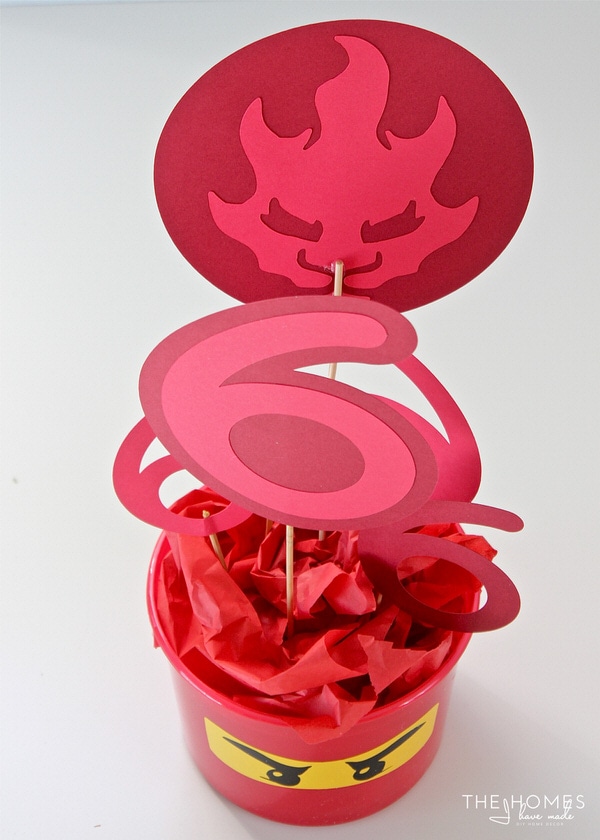 My original plan was to fill these buckets with popcorn, pretzels, goldfish and other snacks for the tables, but no outside food was allowed into the bowling alley. Then I was going to fill them with candy and send them home as favors to each family, but realized Easter was two weeks later. So they just became a fun little piece of decor that really helped set apart our little corner of the bowling alley! 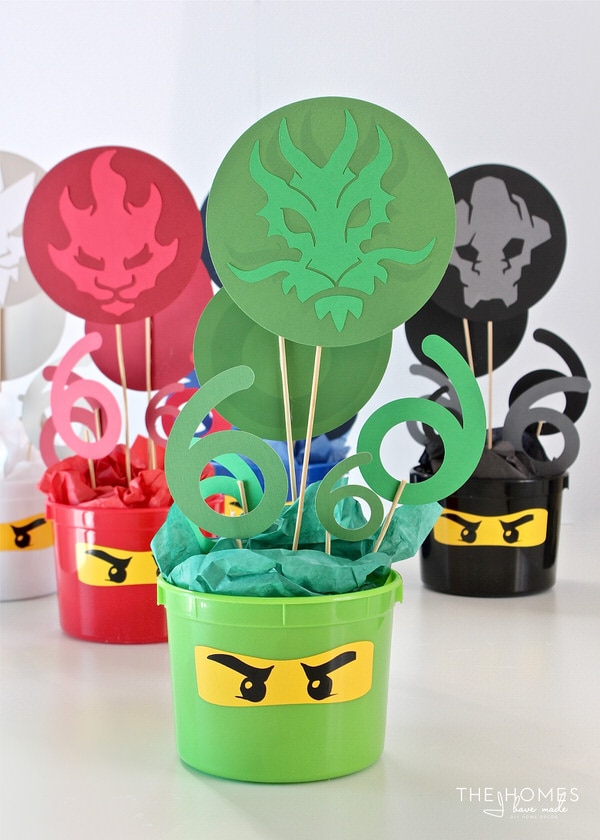 And there you have it! Five simple projects (invites, favor boxes, cupcakes, balloons, and centerpieces) that are quick and easy to make and can really bring a Ninjago party to life! If you have a kid in your life who badly wants a Ninjago party but you can’t find any decor, cut a bunch of eyes and stick them to anything red, blue, green, black and white you can find! This one was one of the quickest and easiest parties to prep for, but turned out to be some of my favorite decor ideas ever! 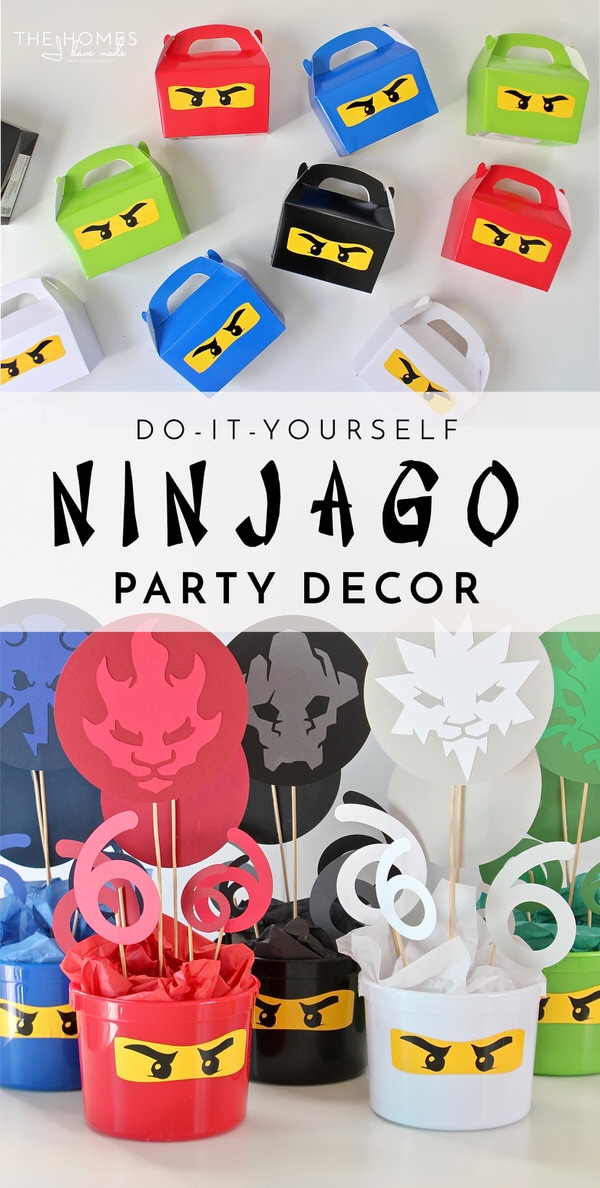 Party crafts are some of my most favorite to do because they don’t require a ton of time and don’t have to be particularly “professional.” You can just play with fun shapes, papers, and ideas and make things as whimsical as you want! If you want to see more fun party ideas or parties from year’s past, check out my Party Gallery here! I’ll be back here on Friday with a nursery organization solution I am LOVING this time around! See you then!

P.S. Make sure you check out the invitation tutorial here! 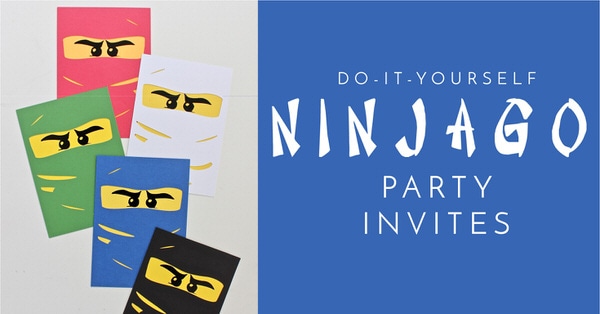