posted by Megan on September 29, 2017 This post may contain affiliate links.

Ahhhh…Legos. The nemesis of any organizing-loving Mama’s heart. Don’t get me wrong, I love the things. They entertain Henry for hours, you can sure make the coolest things with them, and I think Legoland is my absolute favorite kid-friendly spot here in Southern California. But keeping those suckers contained yet usable (and out of reach of a certain adorable 9 month old)? That’s a whole different story. Many of you may remember last year when I shared a post about how we were storing Legos in their sets using Sterlite boxes. It’s a very popular post; and although I very much loved that system (and still do!), I knew our Lego storage systems would eventually need to evolve as Henry’s “master builder” skills developed. Well, in the last 6 months, Henry started playing and building with his Legos like never before; and it became abundantly clear that the boxes of Lego sets were not working. So we decided to embrace organizing legos by color instead, and let’s just say…”Everything is Awesome!!” <– Sorry, could’t resist! Anyway, not only is Henry playing with his Legos even more, but our snazzy new system makes putting rogue bricks away so much easier! Let me show you how we’re storing our Legos now! 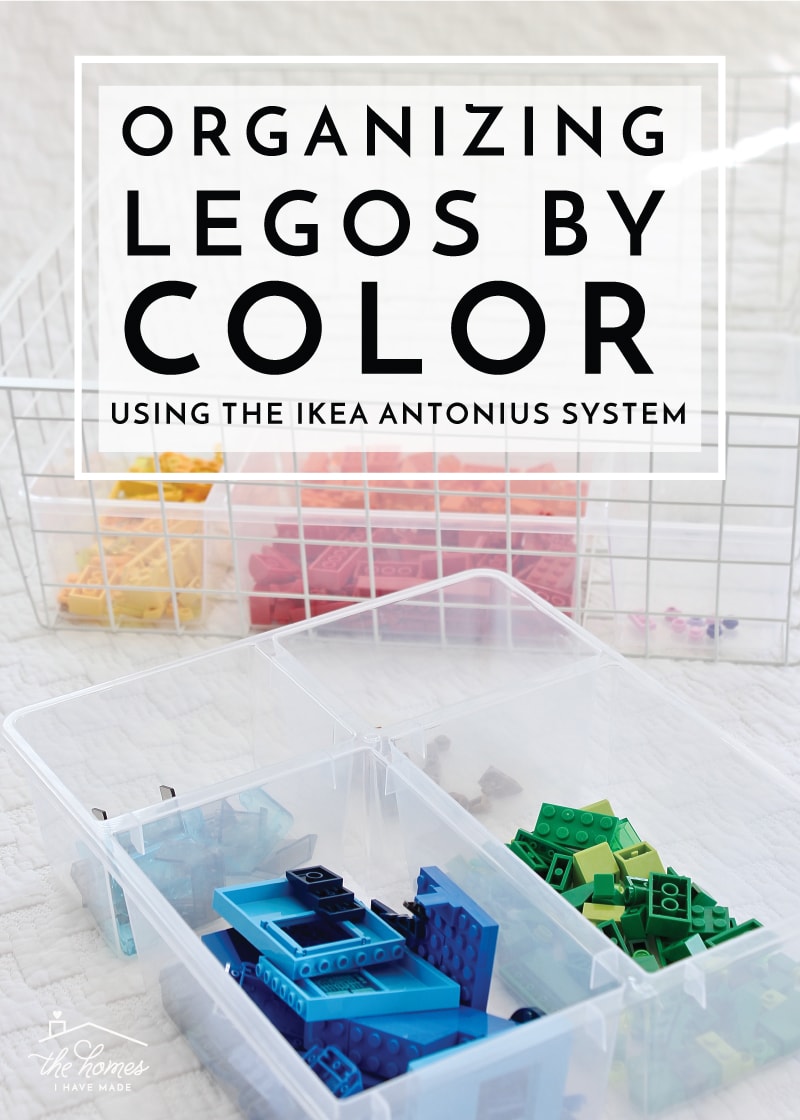 Why We Ditched Storing Legos in Their Sets

When I posted the Lego Set Organization post last year, I could almost hear some of you saying from behind your computer screens, “That’s not going to last.” In fact, some of you even told me so in the comments 😉 But…I will say this. That system worked really, really well for us… 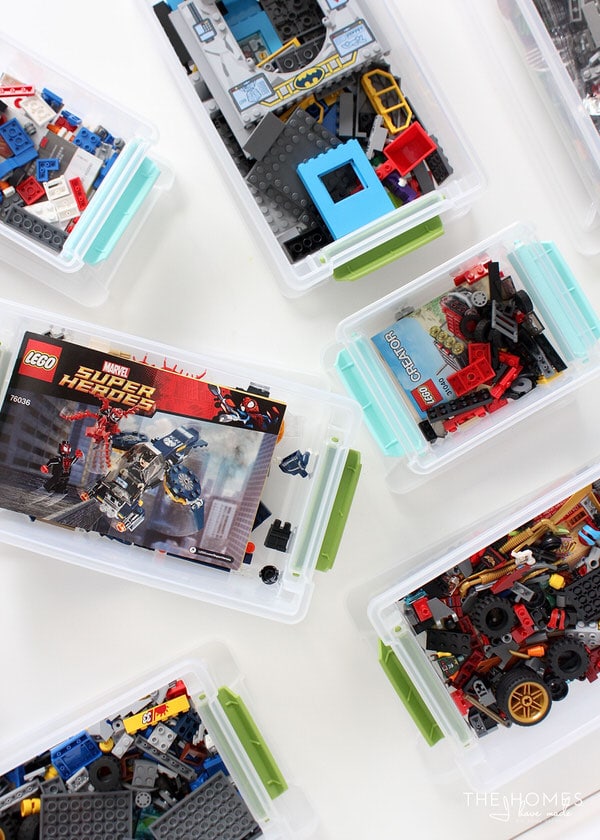 Until it didn’t. What changed? Henry’s playing changed. Back when we organized our kits into individual boxes, Henry was very much in a phase where he needed the directions and the required pieces in order to play with his Legos. He never built his own creations; and once the car or boat or plane was complete, he rarely played with it. So tucking the manuals, completed vehicle, and all the extra pieces back into a tidy little box until he wanted to build it again worked great.

Fast forward to the last few months. Henry suddenly started playing with all the vehicles, all the people, and all the weapons. He was creating scenes and role playing and even started to “master build.” But because all the pieces were tucked into individual boxes, he was constantly squirreling pieces out of this kit and that. In fact, it wasn’t uncommon for me to walk into his bedroom to find 6 different kits open on his bed and even dumped out so he could find exactly what he was looking for. It became clear that the various boxes were actually hampering his ability to play with his Legos. As soon as I mentioned ditching the boxes and organizing Legos by color instead, he was 100% on board. He loved the idea of having access to all his Legos at once, and asked me daily when we’d finally do it.

As you might recall from my 5-Step Organizing Method, I always sort first and shop second (so I know exactly what to look for). So…once we decided to switch from storing Legos by kits to storing by colors, we dumped out all the mini boxes into a big clear bin and then sat on Henry’s bed and sorted the main colors back into the smaller tubs. We didn’t bother with breaking out the various greys, reds, browns, etc, and instead just focused on putting all of one color into a dedicated tub. We also sorted out people, weapons, head accessories, wheels, windshields, and other random things that I knew he’d try to fish out. It didn’t take nearly as long as I thought it would; and once we were done, I had a visual for how many Legos we needed to store. Then I went shopping! 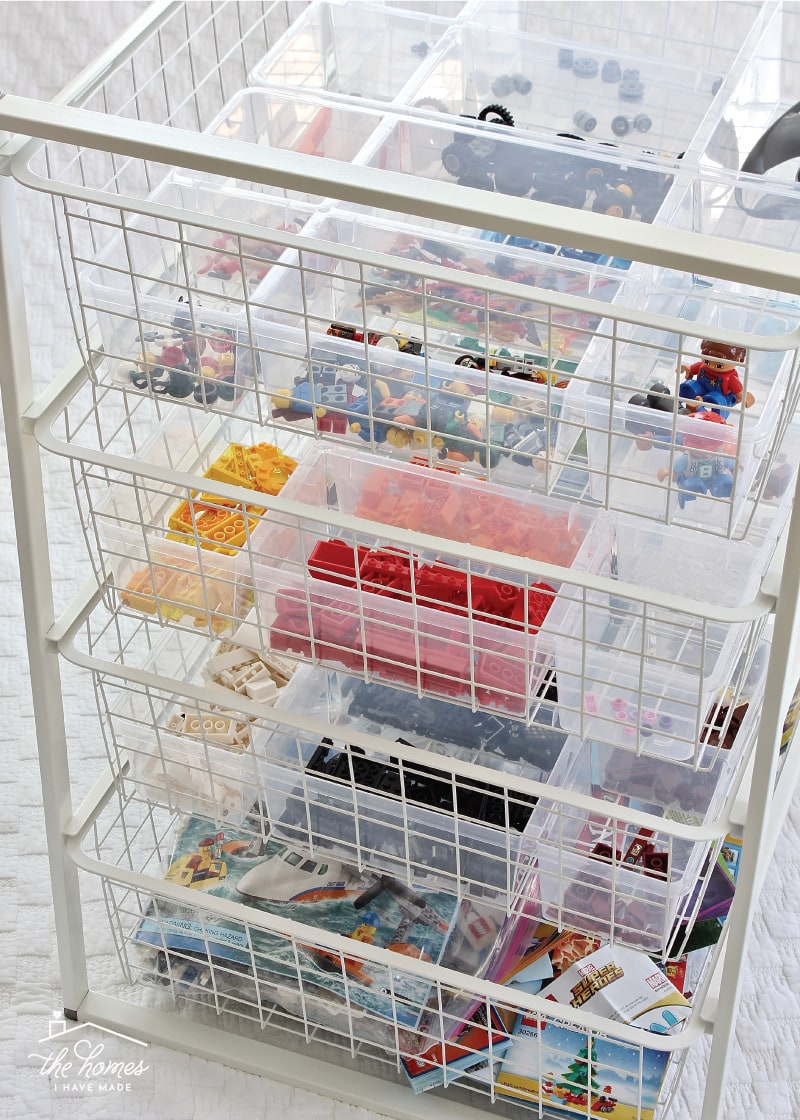 Just a quick note on how this really went…It was hard. Well…Henry really loved the sorting. Me? I loved the therapeutic process of sorting, but it was very, very hard for me to break all those kits down. Not only did it feel like we just painstakingly put all those kits together, but I also knew that if Henry really wanted to rebuild something, it would be a royal pain to fish all the right pieces out of the bigger groups. Still…I hadn’t seen Henry this excited about his Legos ever, and I knew we had to do something to help him play with them more effectively. So I set aside my desire to have perfectly organized kits and fully embraced the color method! Read on to see if I regret it 😉 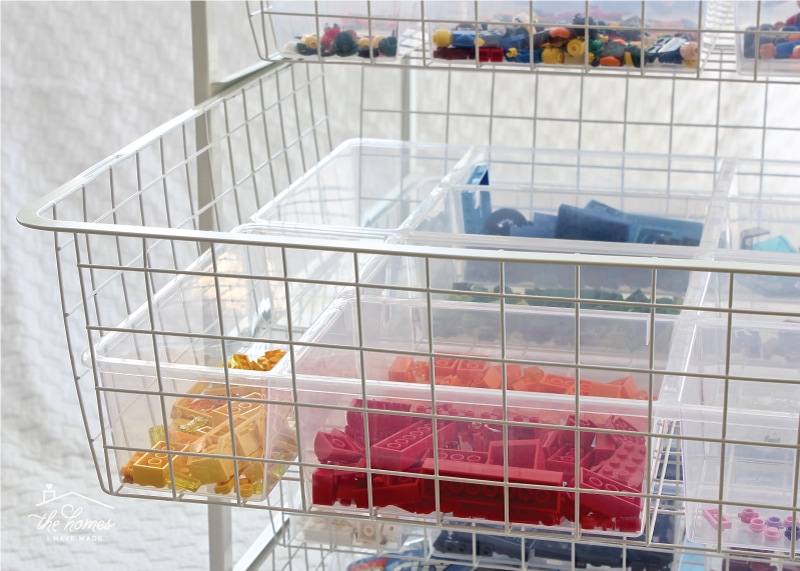 Using the IKEA ANTONIUS System To Sort and Store Legos

I did strongly considered these boxes from The Container Store to sort and store our Legos, but I knew the lids were part of what was making our old kits so cumbersome for Henry. Drawers with dividers really were the ideal solution, so I spent an entire afternoon analyzing options at our local IKEA. I felt that the (smaller) size of our collection didn’t justify using the TROFAST Series that you see most commonly used on Pinterest and around the Blog-o-Sphere for Legos. I then really fell for the ALGOT frame with the box drawers, outfitted with these snazzy organizers. But of course, the inserts were out of stock (and don’t appear to be coming back at all – boo!). When I accepted that getting the ALGOT system to work without the inserts was a fail-waiting-to-happen, I started to consider the ANTONIUS system. Although I didn’t love that the drawers were wire (instead of solid), and that the entire unit didn’t have a top (which actually turned out to be great!), it was so affordable, it was the perfect size, and it gave me the exact storage I wanted. For Around $50, here is what I ended up buying: 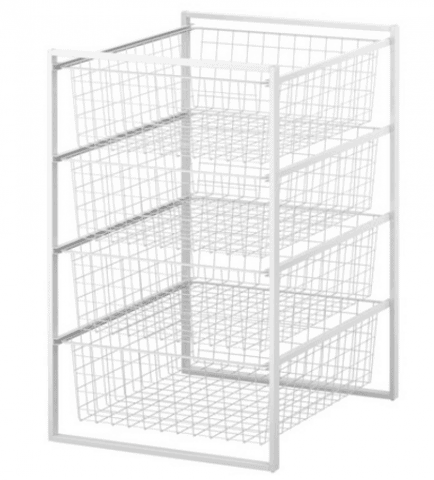 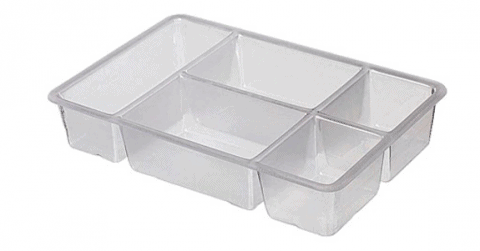 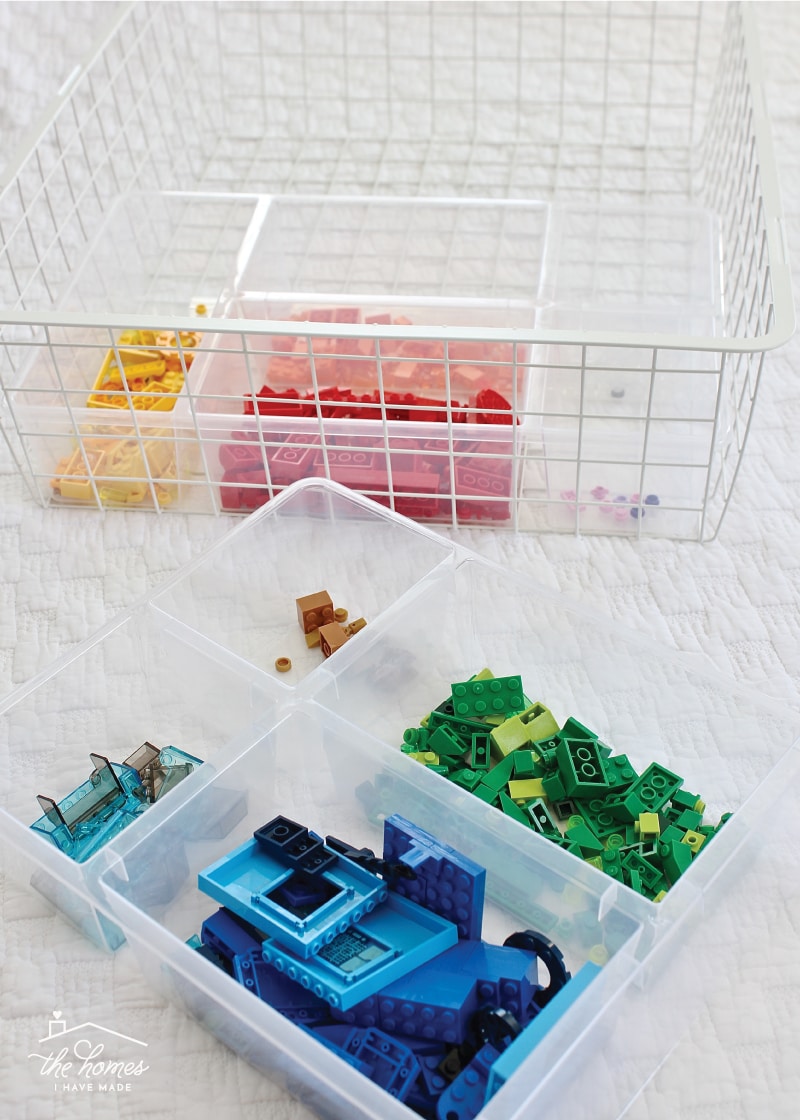 While I wasn’t going to split up shades of each color, I had enough compartments to do so and still had some leftover! I love how spacious each section is, which makes finding individual pieces pretty easy. 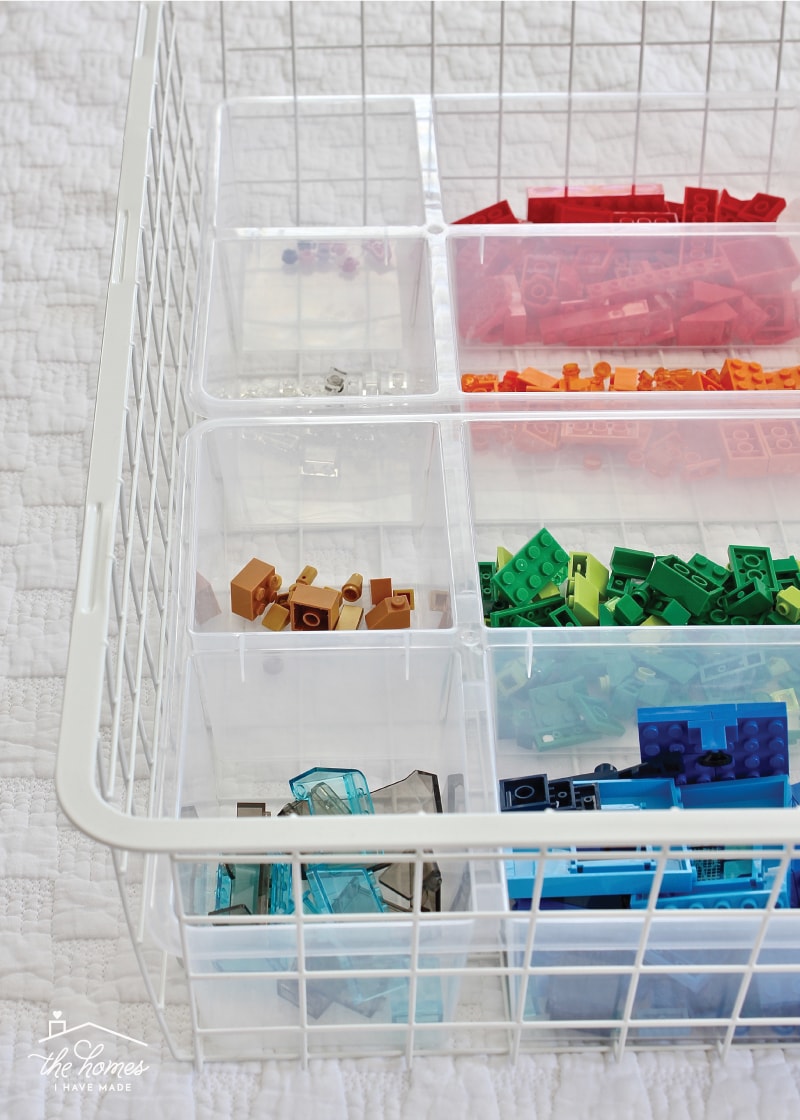 How We Have Our Legos Organized Now

So with a four-drawered ANTONIUS system, here is how we have our Legos organized now:

The bottom drawer doesn’t have any organizers in it because it holds all the manuals. Sure, I could organize these into a binder. But right now, Henry isn’t referencing them all that often, so this at least gives us a place to toss them as we get new kits. 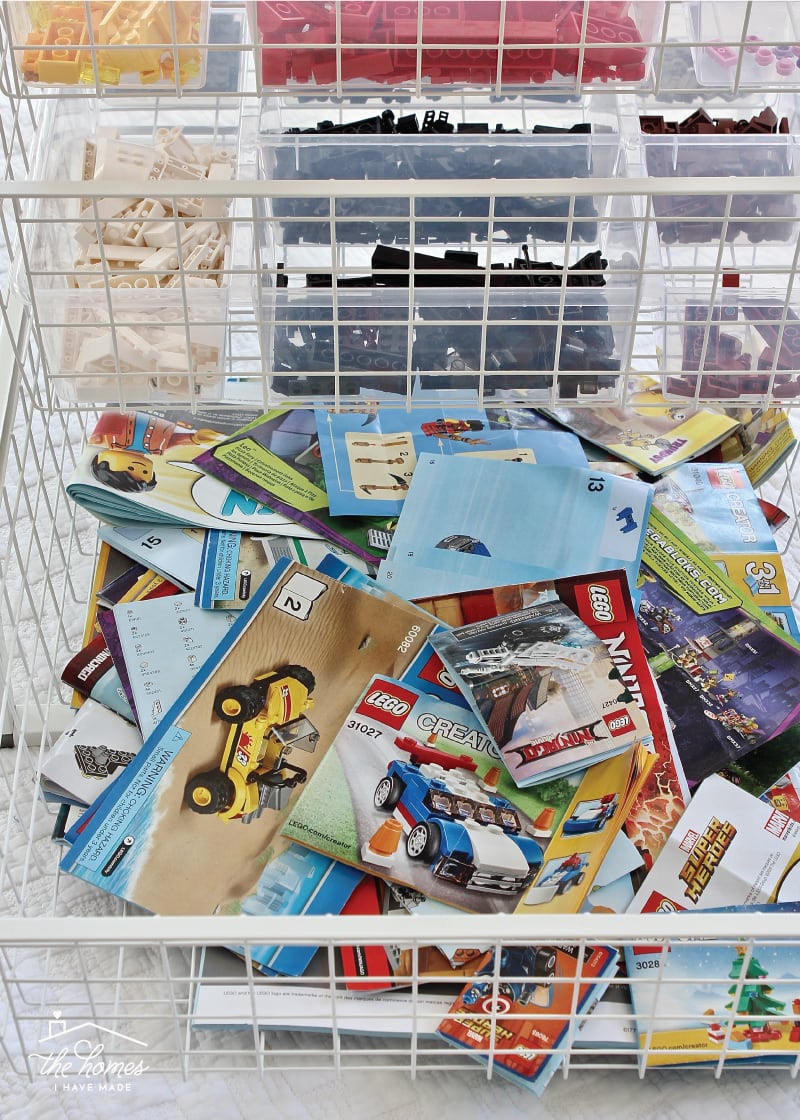 Speaking of new kits. Henry has a habit of wanting to only build certain parts of a kit at a time. So instead of  disassembling the kit from the get-go, I do keep the unopened pack of bricks together with the manual in a Ziplock bag. These get tossed into the bottom drawer with the rest of the manuals. Whenever he has an urge to build something new, we have his new-build kits ready to go! Once they are fully built, any extra peices then get sorted by color and the manual is put with the rest. 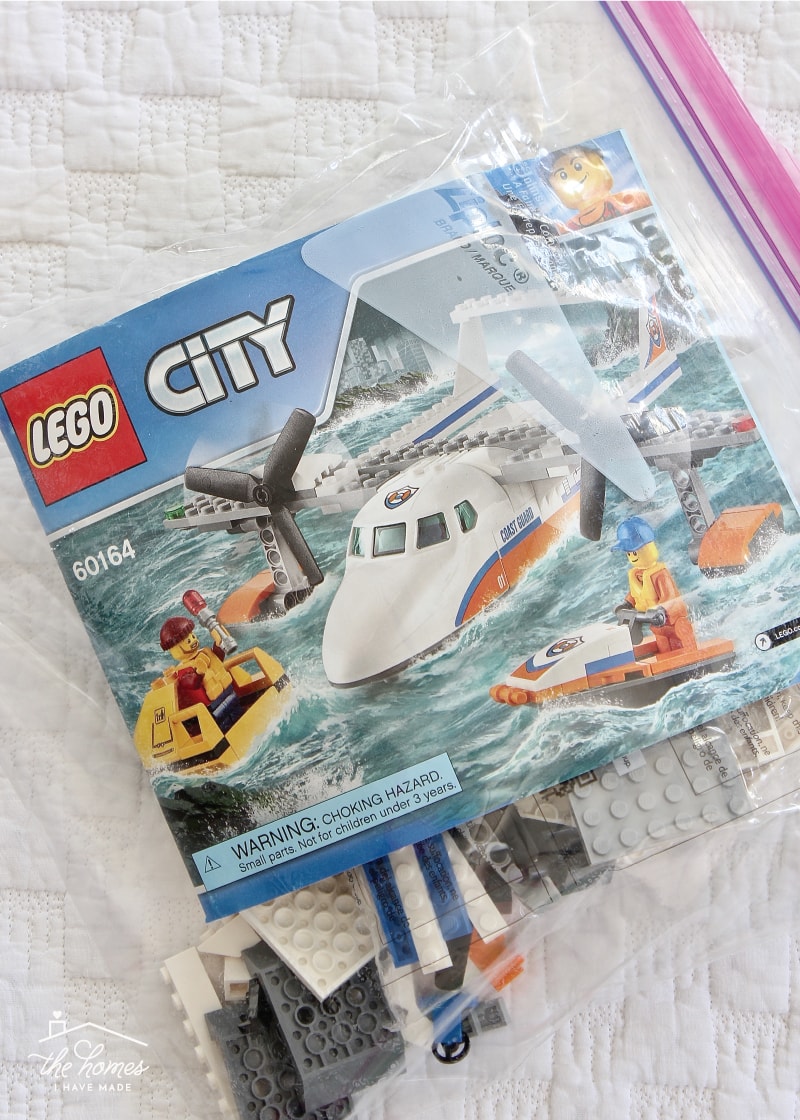 The middle two drawers are both outfitted with two organizers each and are where all the Legos are sorted and stored by color. As you can see, some colors were broken down more exactly than others. This was mostly determined by how big the overall color group was and how many little compartments we had available in each drawers. 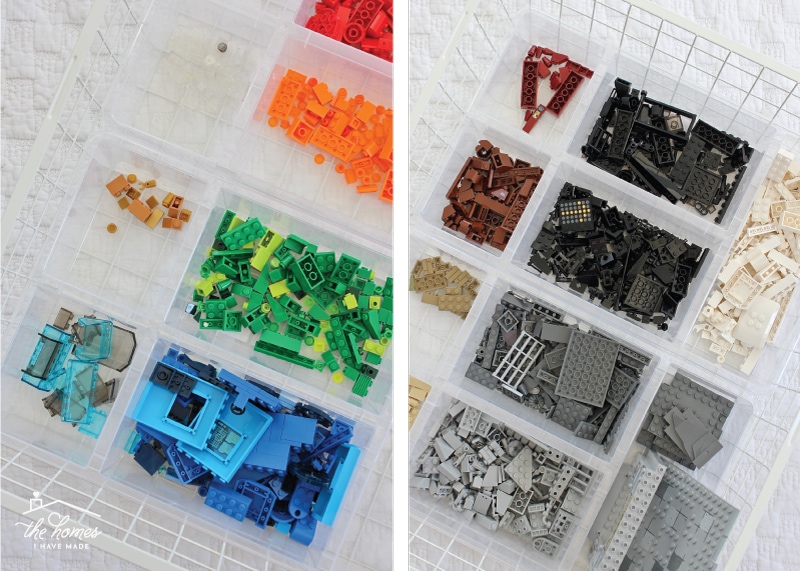 The top drawer is where I feel like I really put Henry’s needs first and foremost. It holds all the things he plays with the most: the people, the weapons, the accessories…and the wheels. Not only does having these items in the top drawer mean he can find them quickly and easily, but because the whole unit doesn’t have a top, he can get things out super easy. No drawers to open! 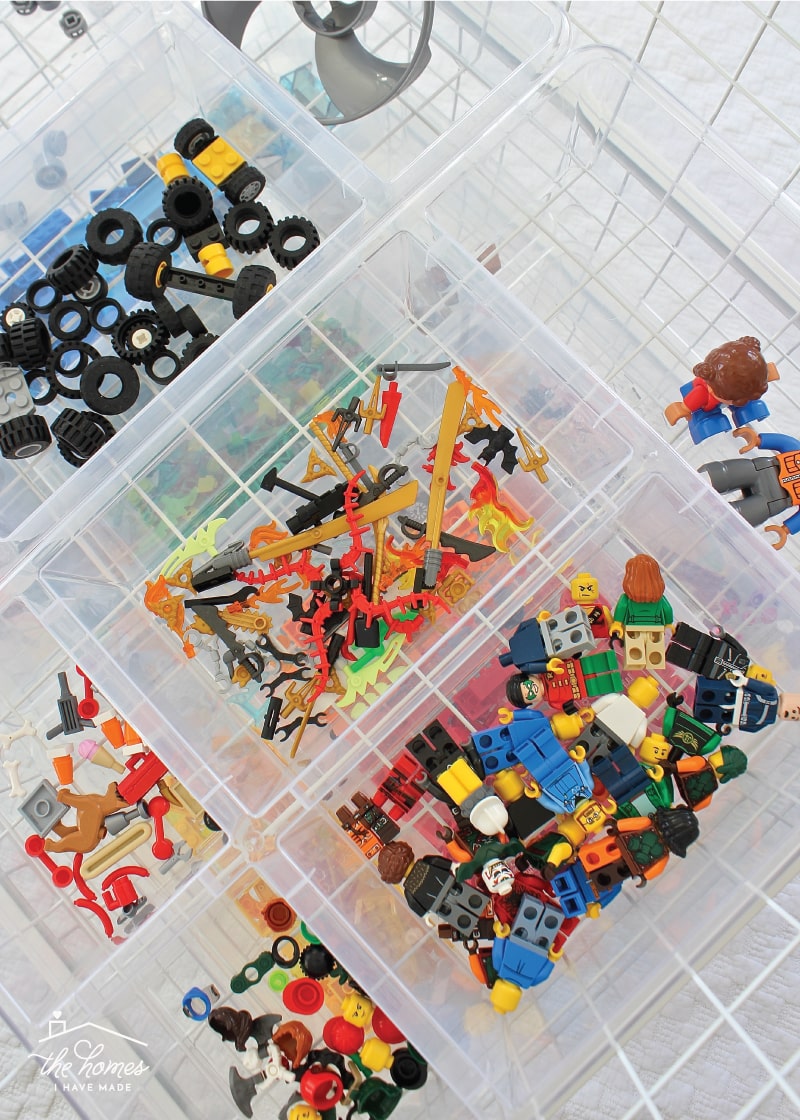 I actually had plans to show you how this system fits into Henry’s room, but this post has gotten unexpectedly long so I’ll show you the “Lego Corner” of his bedroom next week. To finish up though, I just want to recap some of my initial impressions of having Legos organized by color and using a drawer system such as the IKEA ANTONIUS to do the job (we’ve had it this way for about 2 months). 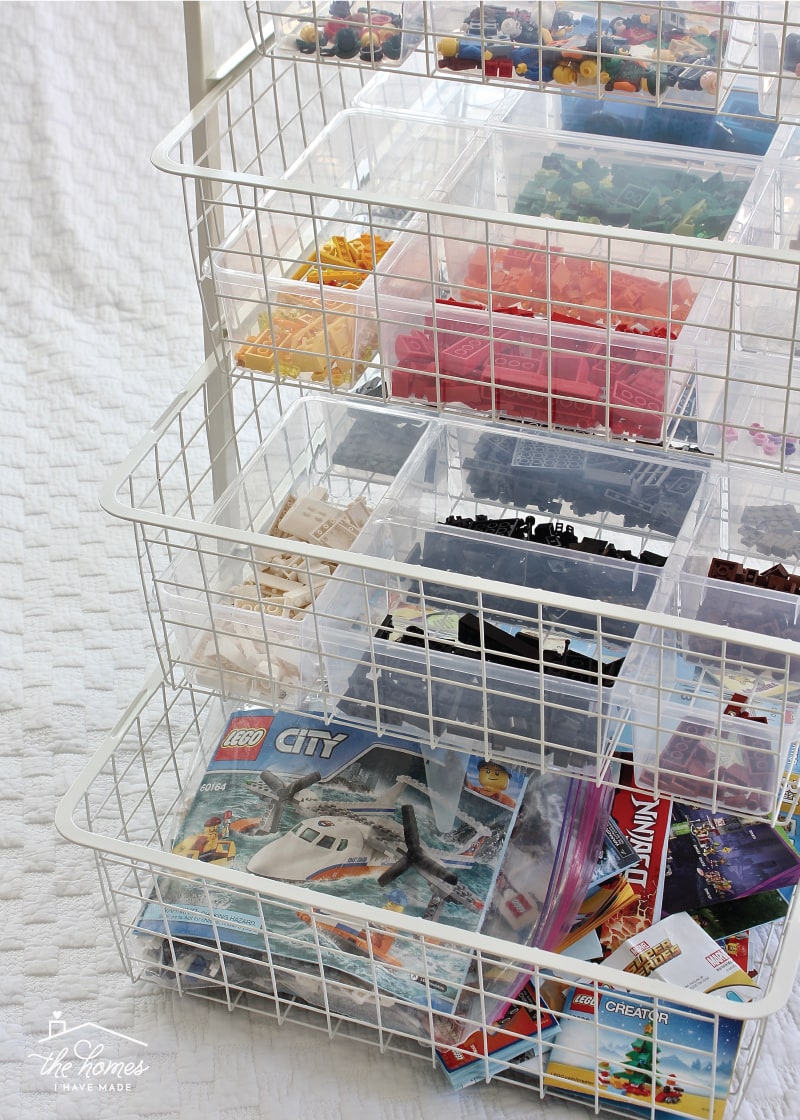 I have to say, I loved our Lego Kit Storage, but this system has worked out so so so well for us. I love that the Legos are easy to find and put away. I love that they are all contained in a single unit. But most of all, I love that Henry sneaks away, at least once a day, to go sit in his room and play with his Legos for (sometimes!) hours on end. I’ll leave you with this snapshot of his desk as proof 😉 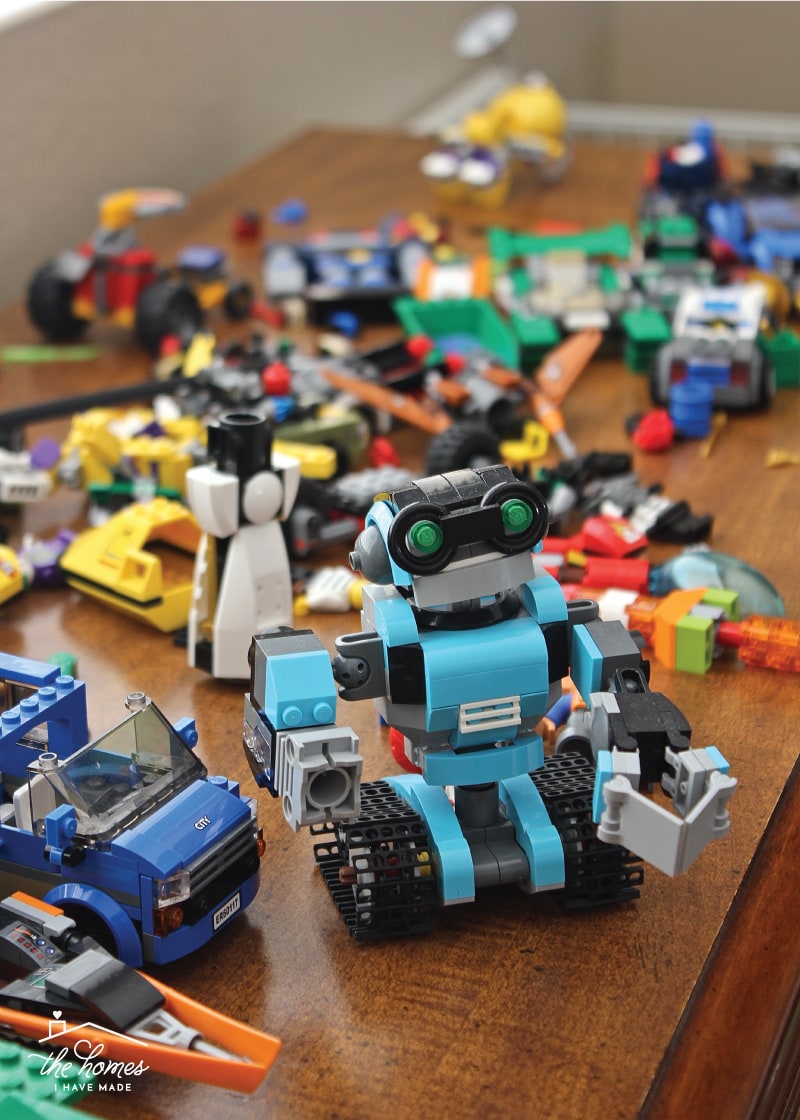 Eeep! Like I said, I had plans to show you how this system fits into Henry’s bedroom, and how we’ve created a whole Lego corner which features this unit, a works space and a display space. But I was too long winded here (shocker!), so I’ll pick up there on Tuesday! In the meantime, I’d love to hear how you store Legos?!? Have you had to revisit your systems over the years as your kids’ abilities grow and evolve? What products work best for your family? I’m all ears in the comments! 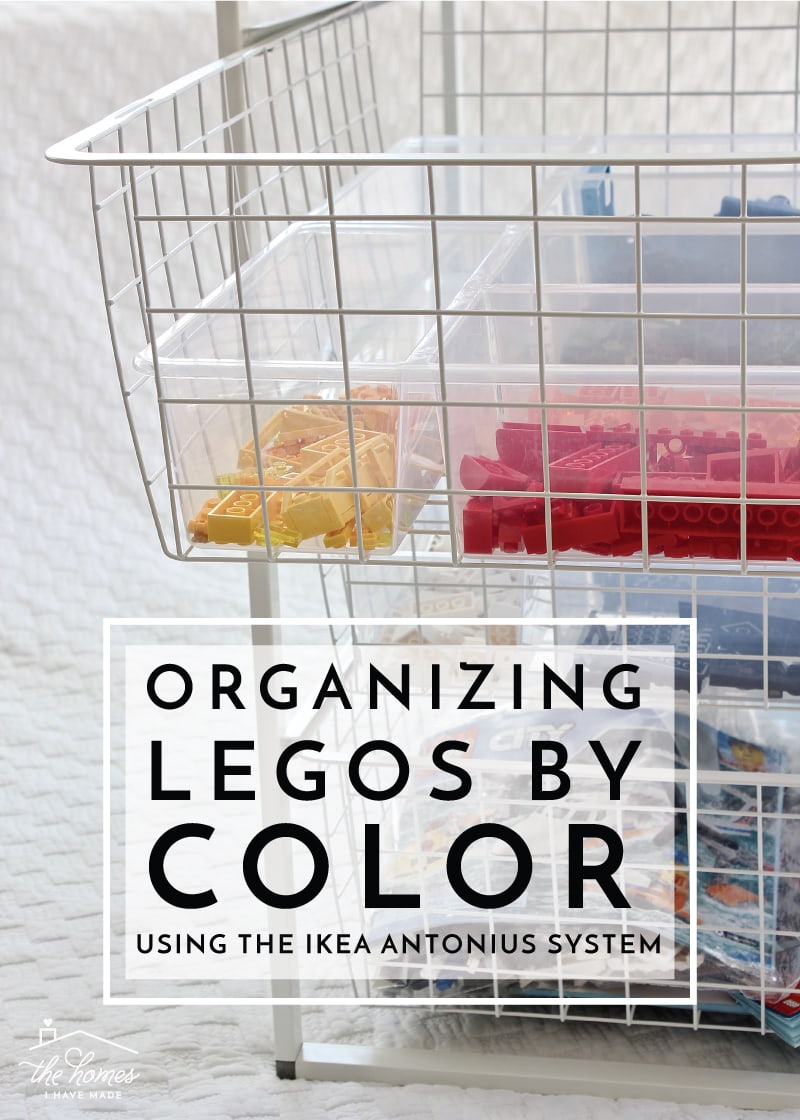 Have a great weekend, friends! See you back here next week!

10 Comments on “Organizing Legos By Color”