How to Spray Paint a Mirror

posted by Megan on November 22, 2013 This post may contain affiliate links.

In the world of DIY/craft projects, I have found that it is best to assume that a project is going to be more difficult and take more time than you think. That way, when you are (more-often-than-not) way more hours into a project than you ever anticipated, you aren’t shocked or totally bummed out. In my experience, almost every project turns out to be more complicated than I originally thought; and very rarely, is the opposite the case.  In fact, this project might be my one and only project that I thought was going to be a nightmare to pull off but ended up unexpectedly quick and simple and fabulous!

As I told you on Wednesday, I landed a major deal on this mirror from Kirlands. Between a sale, a coupon, and a small scratch in the mirror itself, I got it for $30. I loved the detail in it, and it really reminded me of this way-more-expensive one from Pottery Barn. I snagged it up, thinking I got the deal of the century until I got it home and (then) realized its bronze finish didn’t work in any room in our house. Boo. 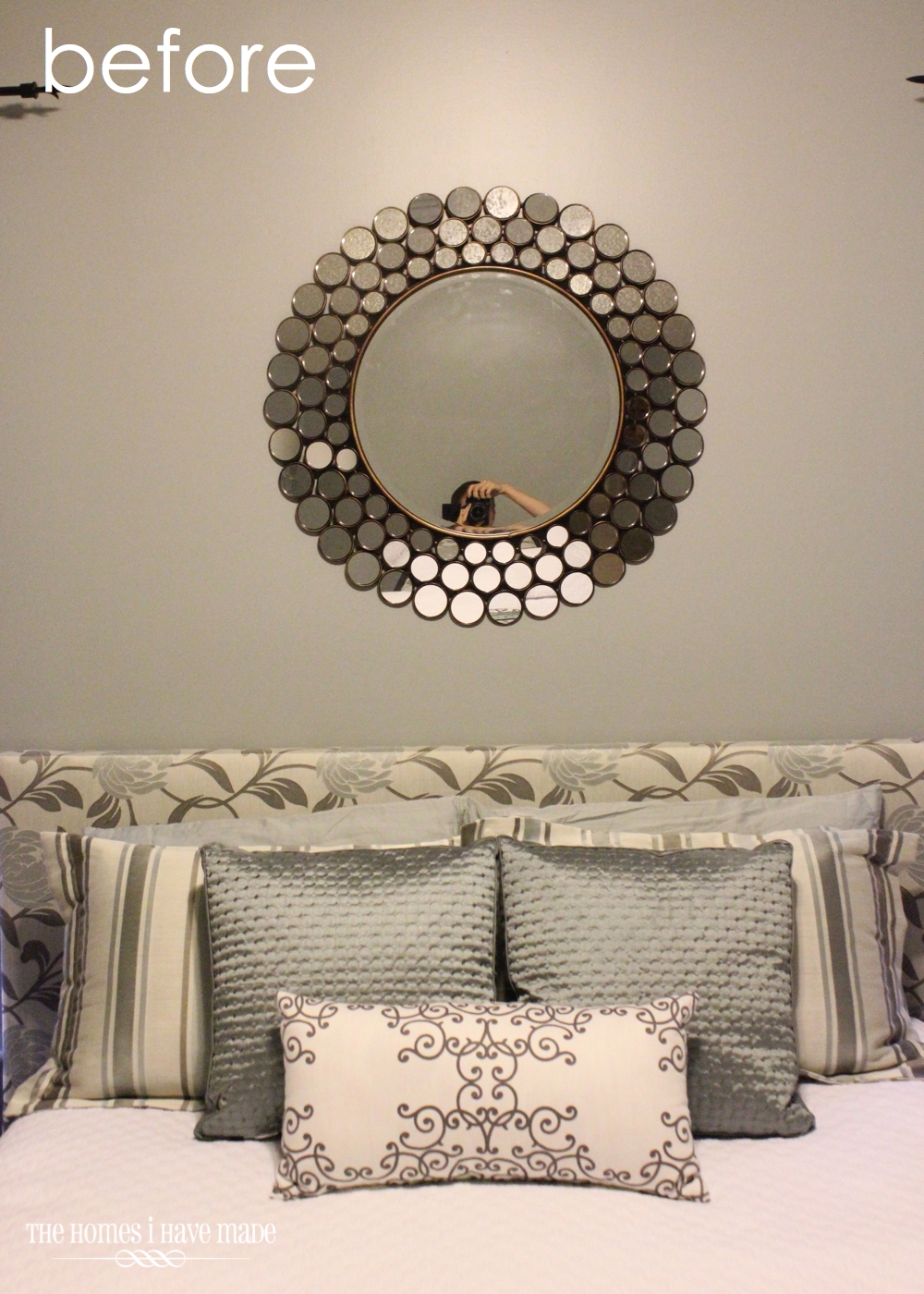 Oh, and I tried. Yep – I tried it in every.single.room. I was determined to find a home for it because I really loved it…but that brown metal finish was mocking me everywhere I put it. 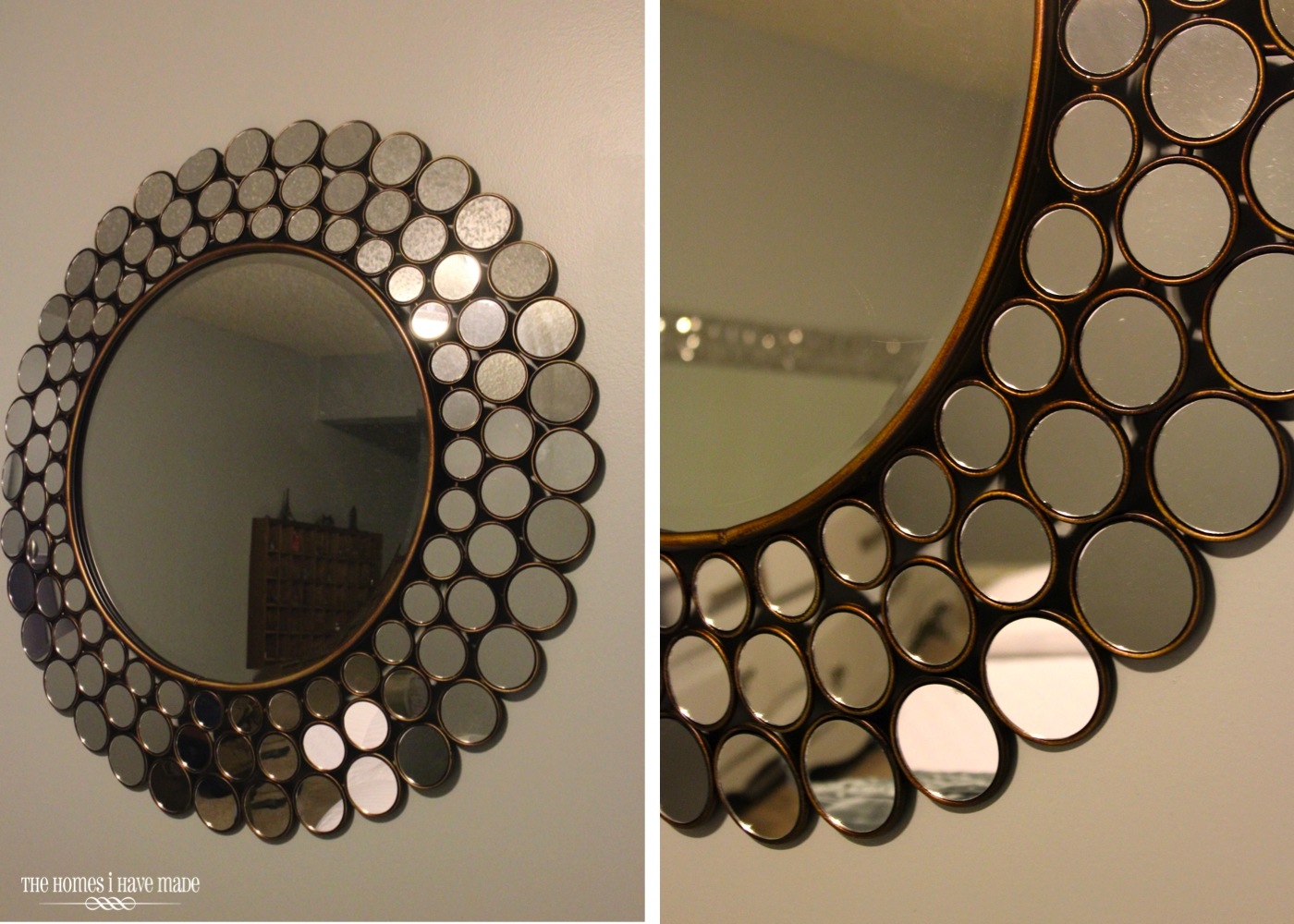 Finally, I decided that I bought it for above the bed and therefor, above the bed it was going to go. I could fix that bronze finish after all. It would be a ton of work to deal with all those nooks and crannies and circles, but I could do it. So I committed to changing the color of the finish, and geared up for a DIY marathon! 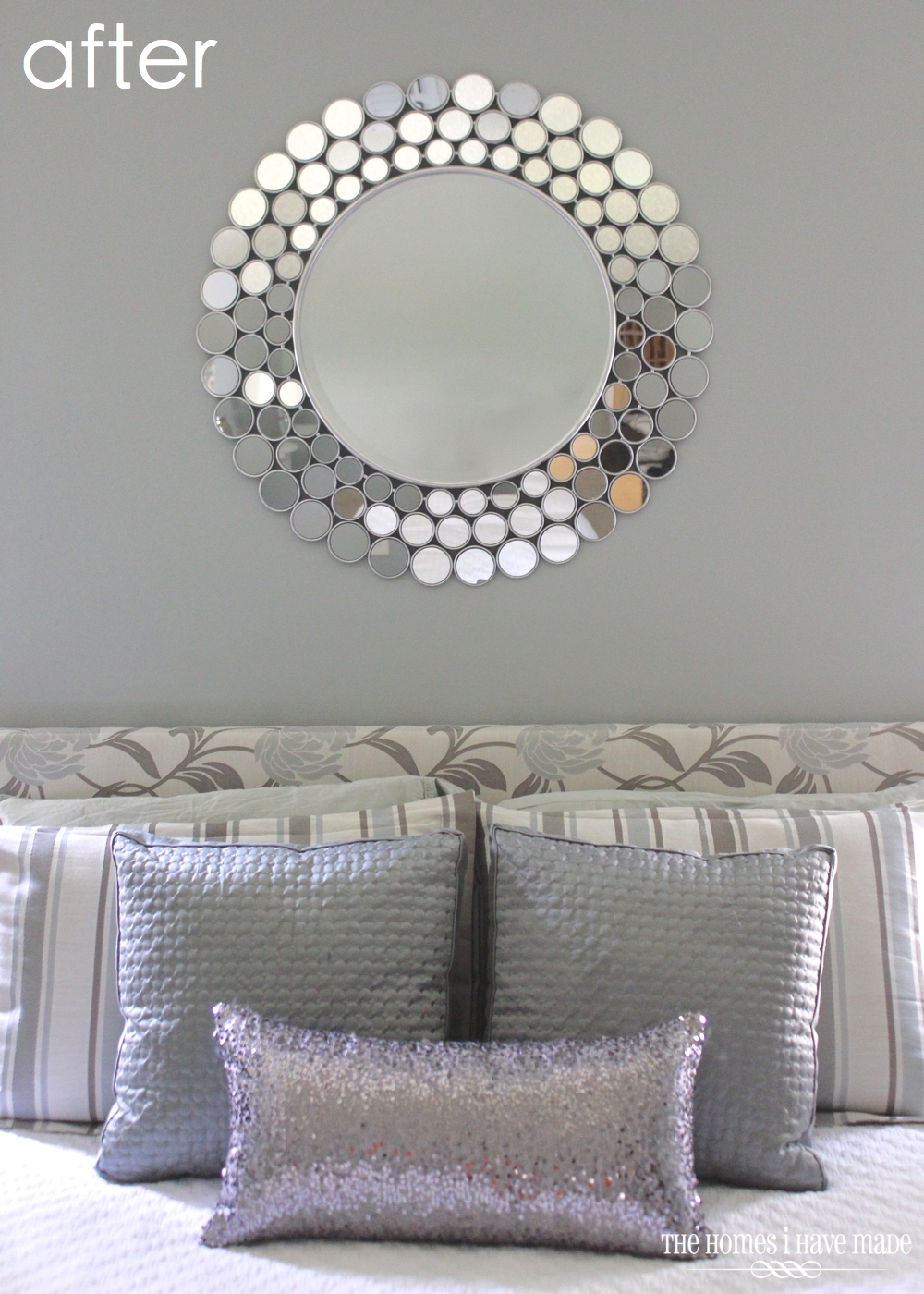 I thought about painting the mirror by hand with silver Rubb-n’Buff, but I thought it would be SO time-consuming and rather messy. Spray paint was my gut, so I went with it. The key to spray painting a mirror (or anything really) is masking off what you don’t want painted. In this case, I not only had to cover the big round mirror in the center (not much of a problem), but all those mini mirrors around the perimeter (kind of a problem). Once I realized the smaller circles were close to standard sizes, I knew exactly how this was going to go!

One night, while catching up on The Voice (I mean, I love that show, but do we really need three hours of it?!?), I sat down with a Big Shot Die Cut machine and a set of circle framelets. Using the smallest three circles, I cut out a bunch of circles from plain white contact paper. My smallest circles were a bit too small, my big circles were a bit too big, but the middle circles were just right! I trimmed down the bigger circles as I placed them on the mirror. The smaller circles didn’t fully cover the mirrored circles, but I’ll tell you how I dealt with that in a bit. 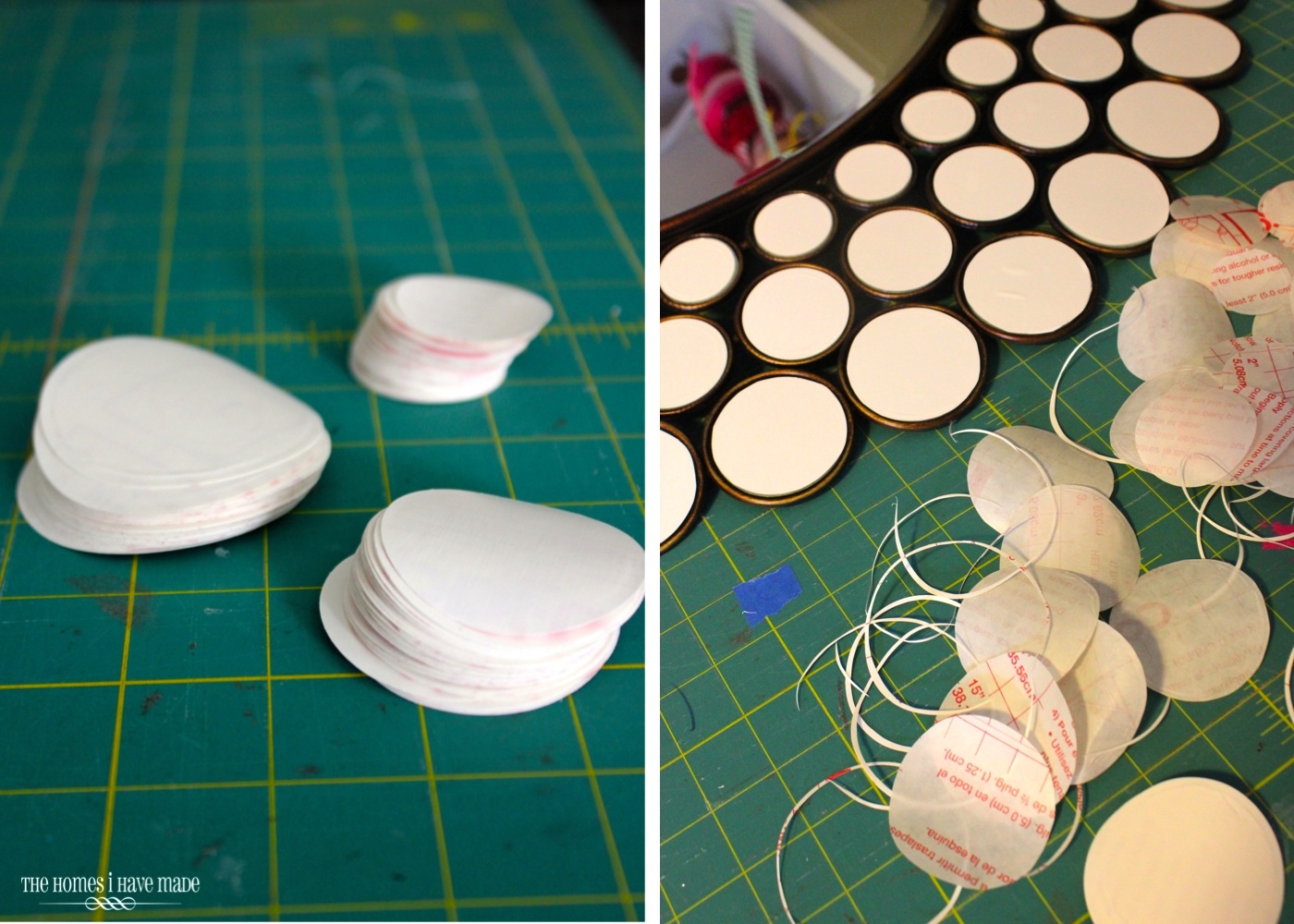 With the perimeter all covered up, it was time to tackle the big middle circle. Taping around in a circle is a bit tricky (straight lines of tape don’t work well on the round curve of the mirror). I found that cutting my remaining circles in half allowed me to put a curved edge of contact paper around the rim of the mirror. Once the edge was nice and protected, I cut a big circle out of newspaper and covered up the rest of the mirror. 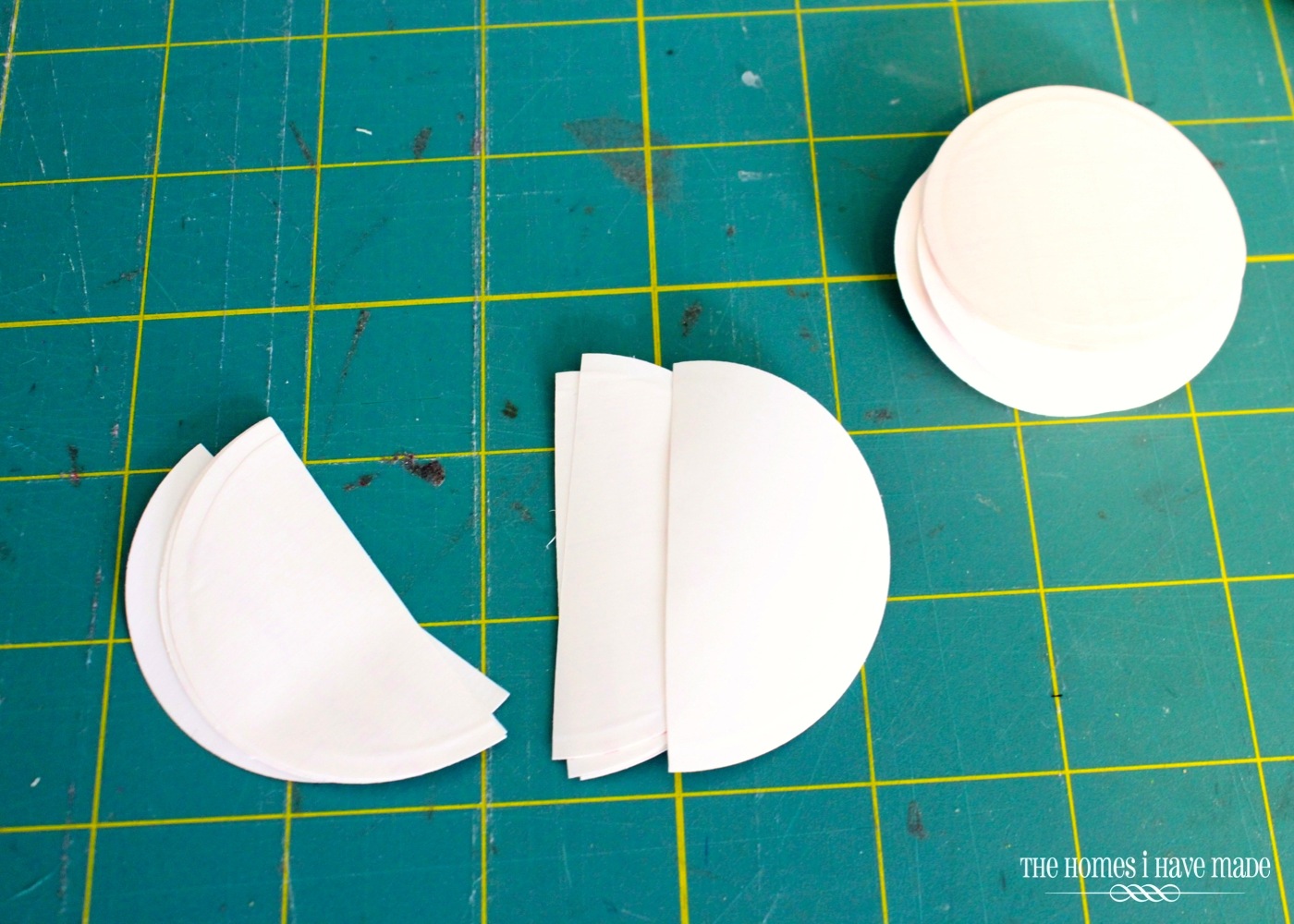 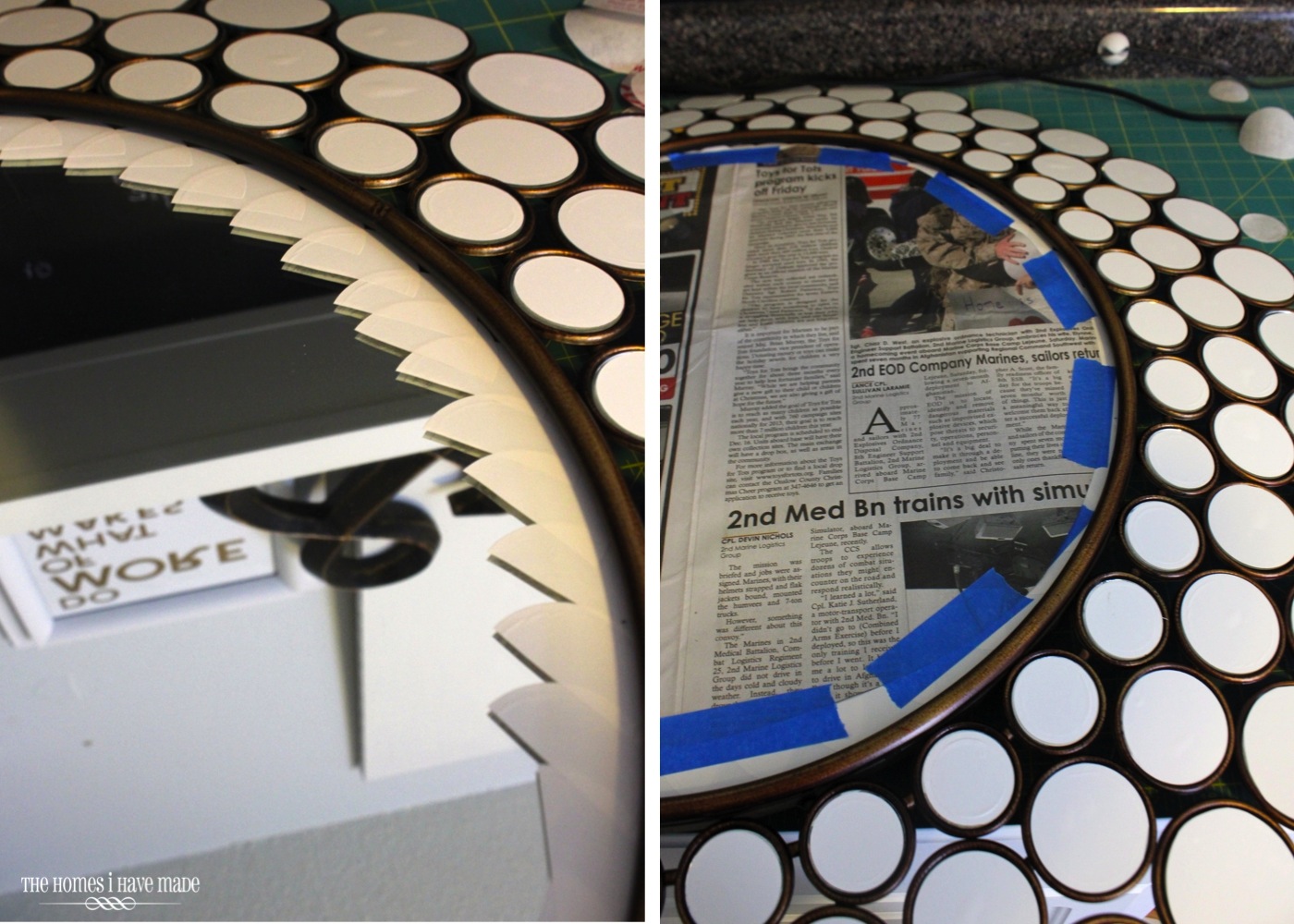 Here’s my mirror all masked and ready for painting. I’d say, up until this point, I invested about 3 hours of cutting, trimming, and placing the contact paper to protect the mirrored surfaces. 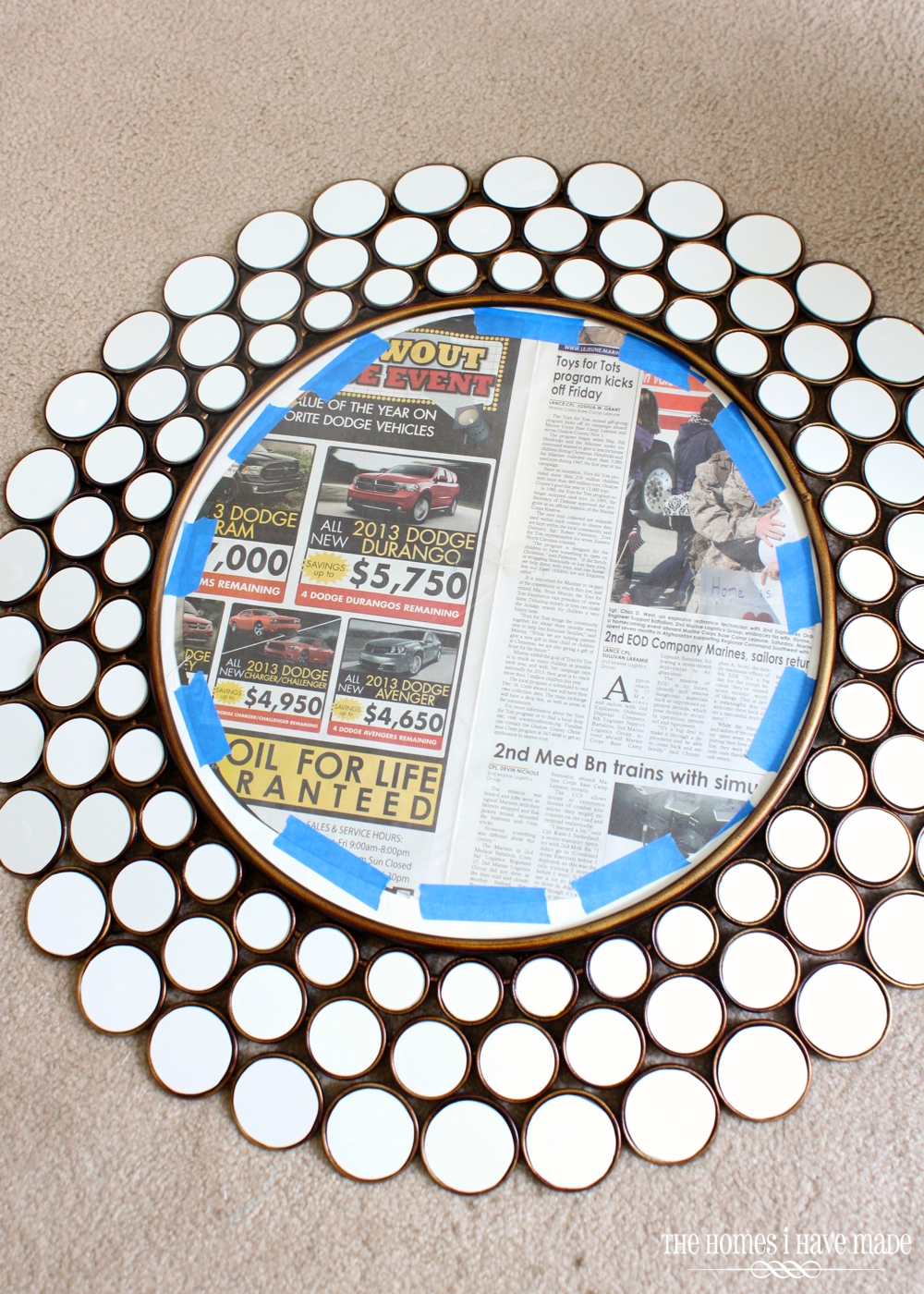 Next, I gave the mirror two light but well-covering coats of Valspar Silver Spray paint. Friends, I cannot rave enough about this spray paint. While it does give a more matted metallic finish, it covers SO well. I thought I’d have a heck of a time getting all the angles and internal edges, but this paint went on smoothly, evenly, and covered all my bronze surfaces so perfectly. Not a drip and not an edge un-touched! I gave the mirror about 24 hours to dry. 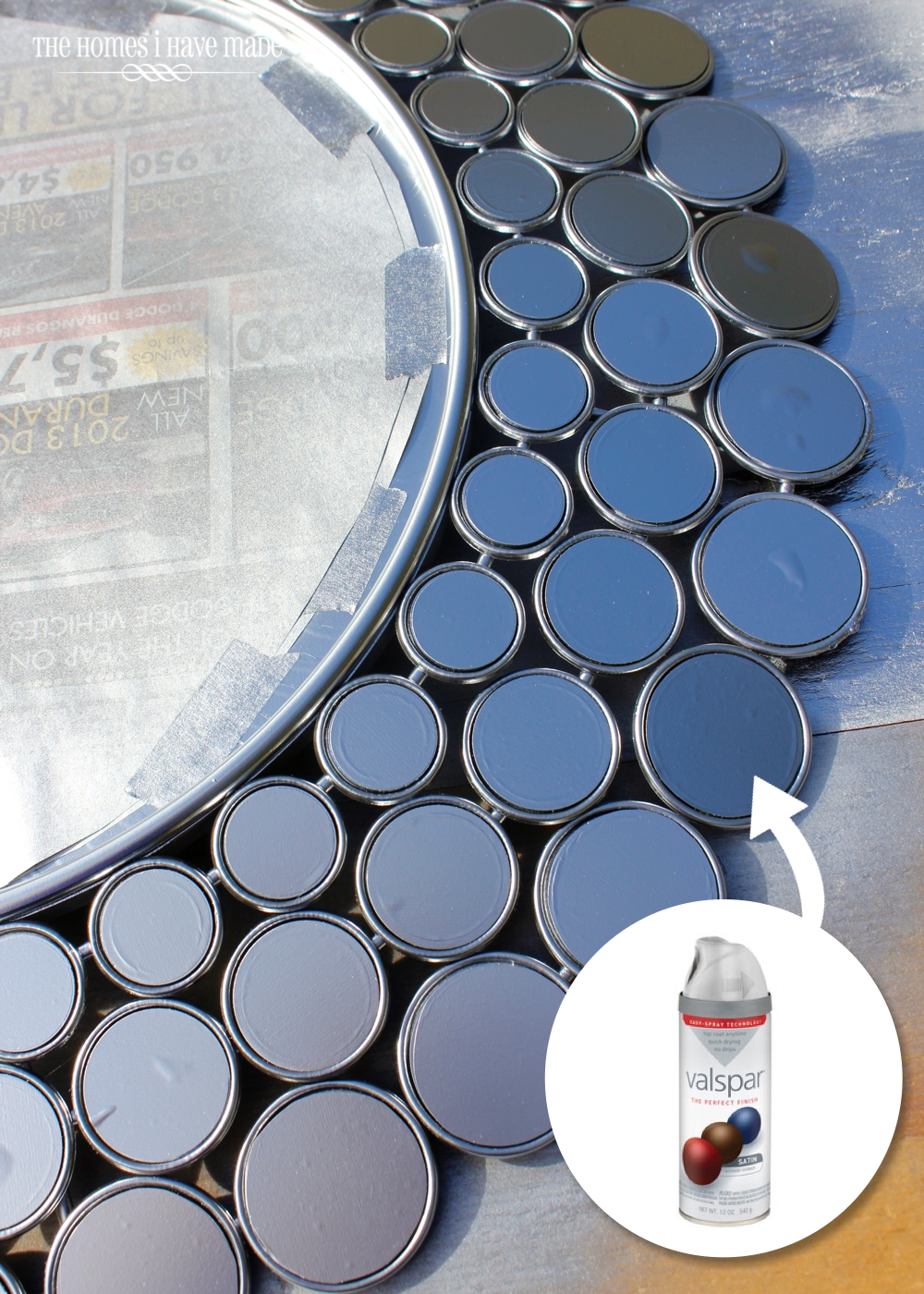 The last step took place at night and I forgot to snap some pictures, but all that was left to do was remove all the paper circles and clean up where paint did come in contact with the mirrored surfaces. The contact paper peeled right off the mirror; and in the big center and the medium and larger circles around the perimeter, I had nice clean edges and hardly any clean up to do. My smallest circle cutouts however, were a tad small, leaving a ring of silver paint along the edge of each circle. Totally a pain, but fixable. I went around with an exacto knife and Windex and cleaned up each mirror so there was no residual paint. It worked like a charm, and after another hour or so, I had a pretty, clean, silver mirror to go back up on the wall. 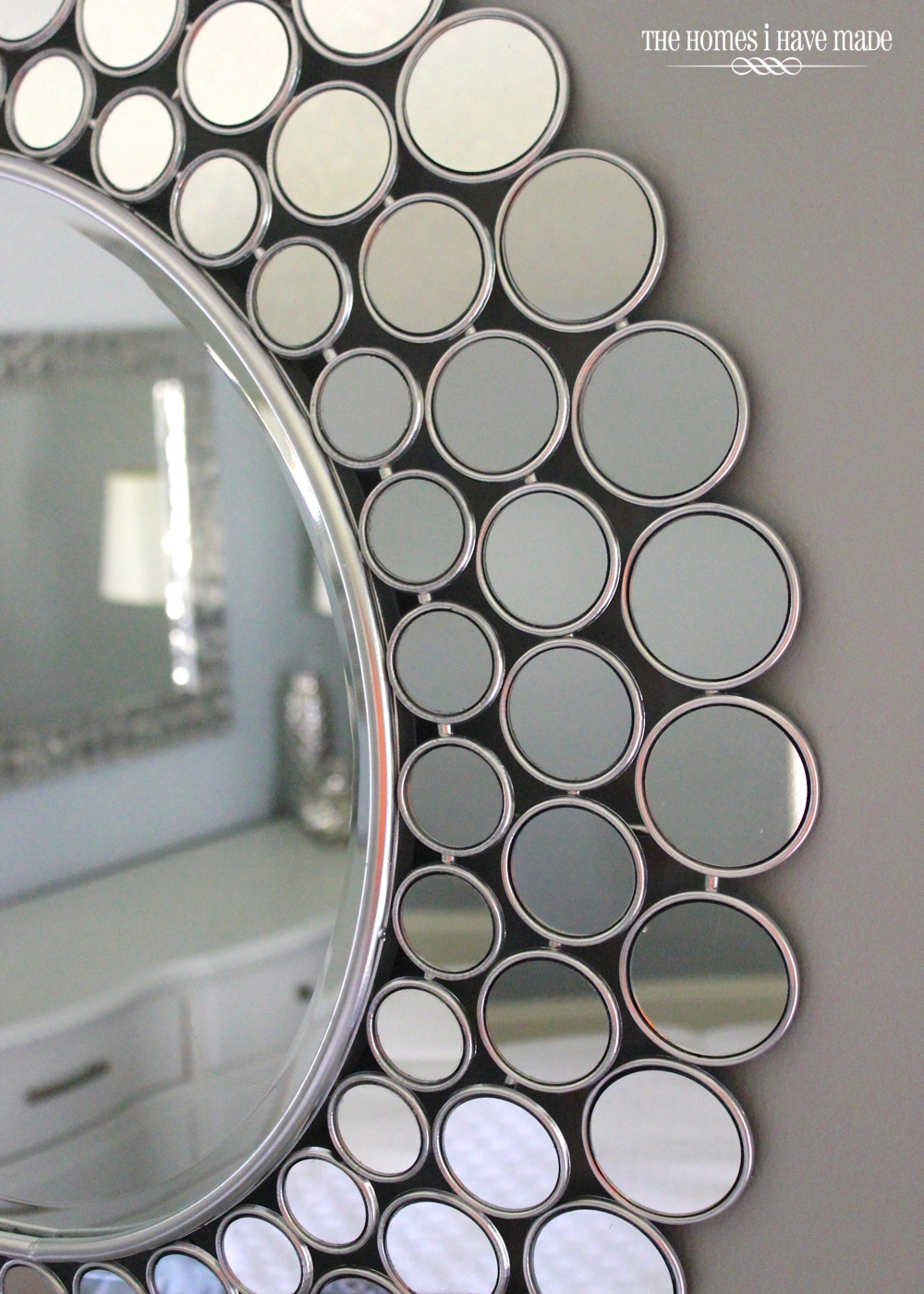 In the end, I am so thrilled I made the decision to paint this mirror. I had visions of this transformation being long, tedious, and ultimately turning out poorly. However, quite the opposite was true! Each step of this transformation was admittedly a bit tedious and time consuming, but not all that difficult. I’d say with about 4 hours of work and a $5 can of spray paint, it has a whole new look that was worth every minute and every penny! 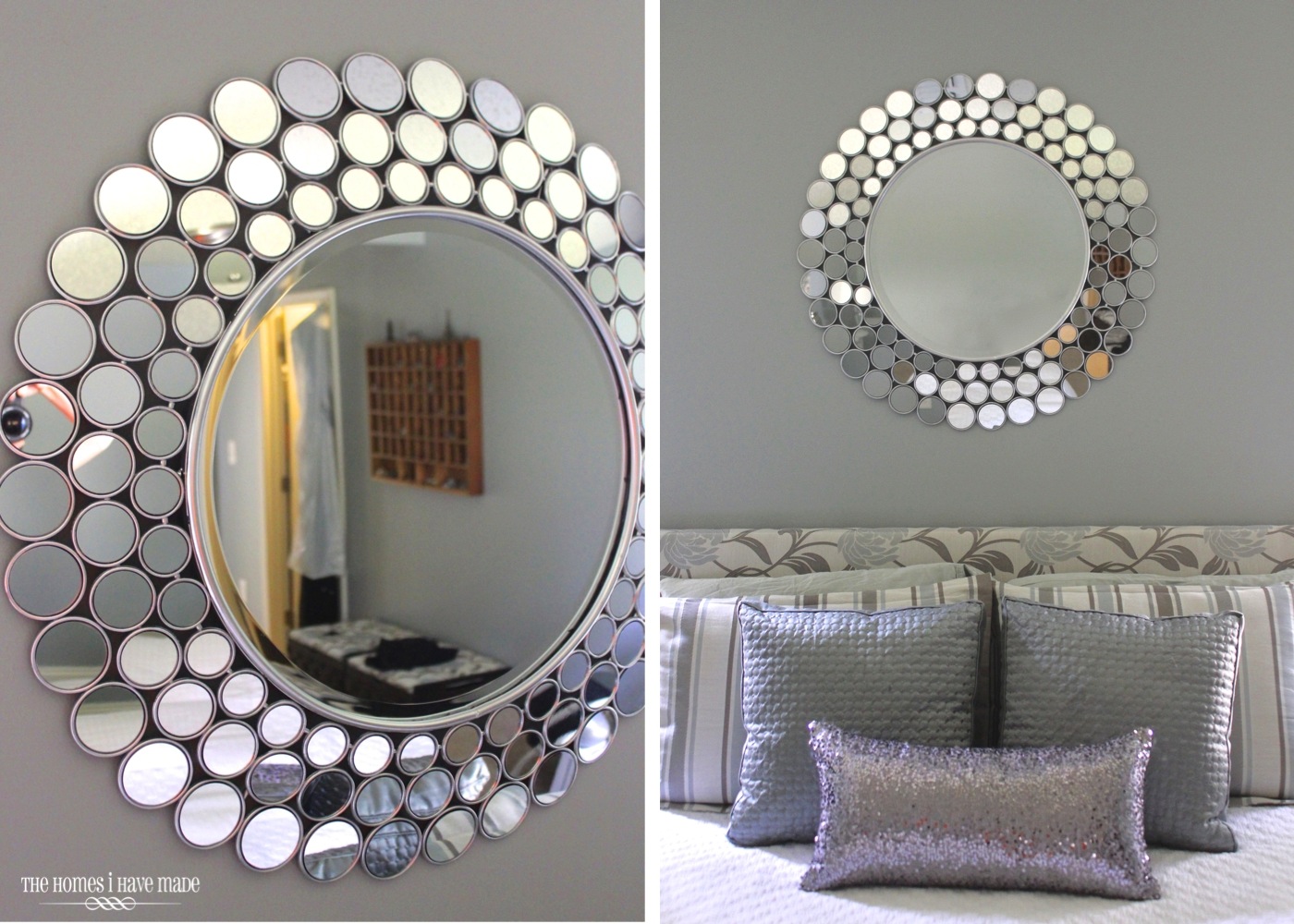 If only every project turned out so simple! 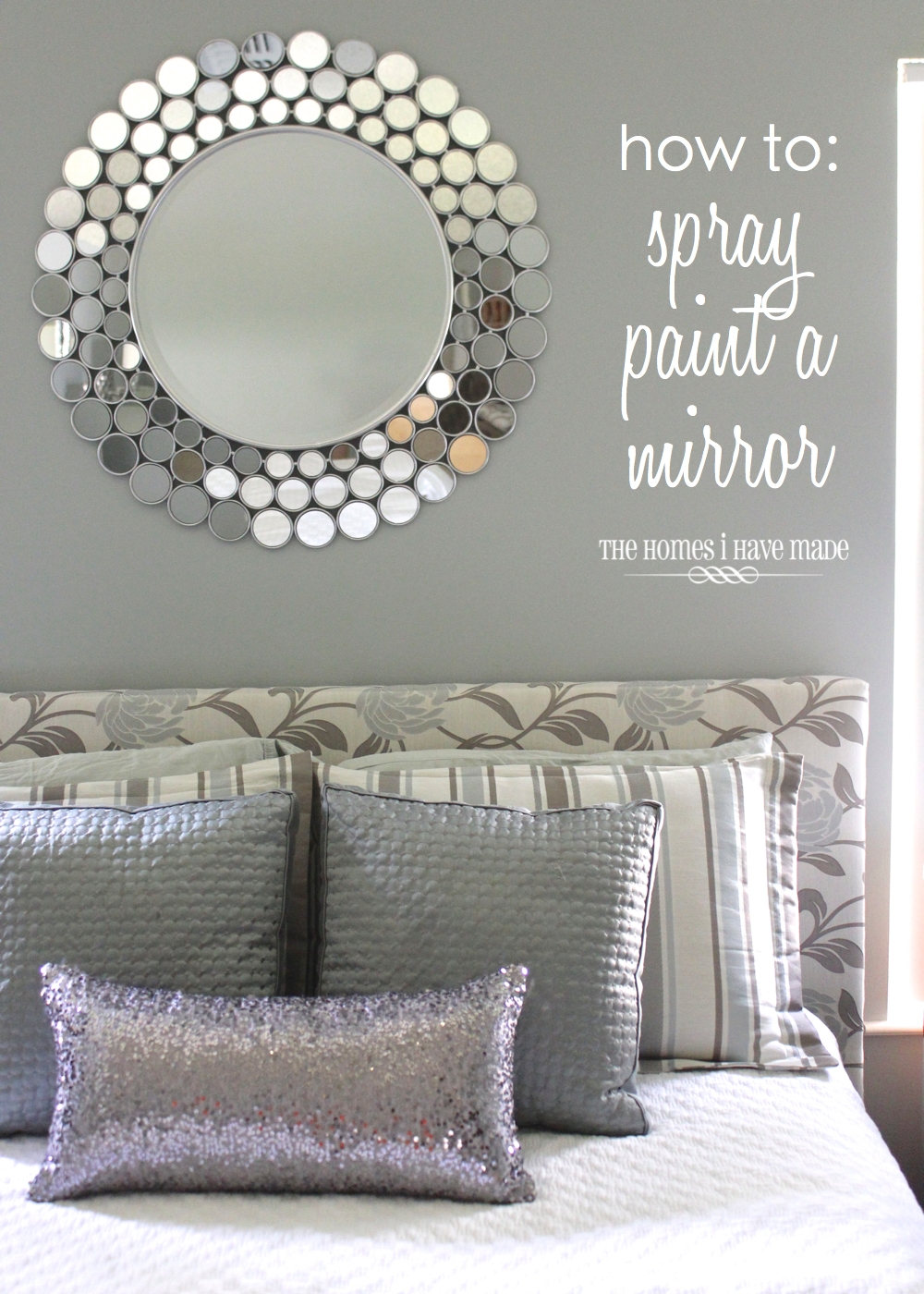 I hope you all have a great weekend. We are getting our house into the holiday spirit big time – I’ll have more details for you next week!

5 Comments on “How to Spray Paint a Mirror”