posted by Megan on April 22, 2013 This post may contain affiliate links.

HEEEEEELLLLOOOO everyone! Long time, no see! Sorry for the un-annoucned little break last week. After a few weeks of party prep, the birthday party, two weekends in a row with company and all the crazy world events of the last week, I just needed a little downtime and a few steps away from the computer. My heart was craving a little break, so I didn’t ask questions and just took one – sorry to leave you all hanging. By the end of the week, I was antsy to get back at it…so rest-assured, I am feeling re-freshed and ready to get back to regular posting.

Before my little break, I was chatting up all things On-the-Go Second Birthday Party – you can read the full party reveal HERE and a spotlight on all the DIY decor I did HERE. I wanted to show you one more project from the party before I wrap up this little series! This was a quick and easy (and relatively inexpensive) toddler project – great for the party AND great to have in the garage for summer outdoor playtime! 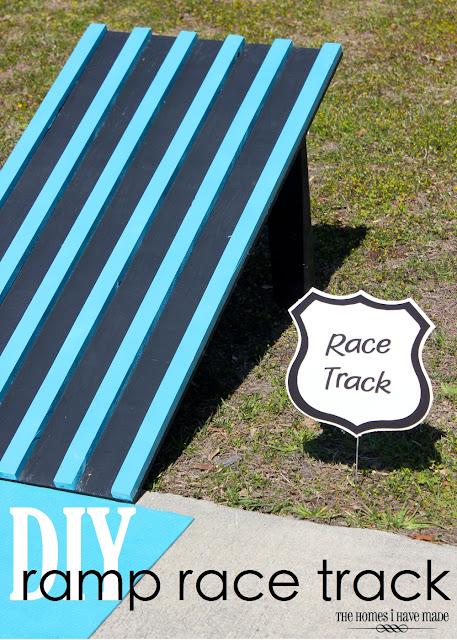 I can stake no claim to this idea; I got my inspiration from this adorable party. When I saw this idea for a race track, I knew it would be relatively simple to put together and would be a perfect addition to our toddler party activities. After all, what little kid (or big kid?) doesn’t get a kick out of racing cars down a track? 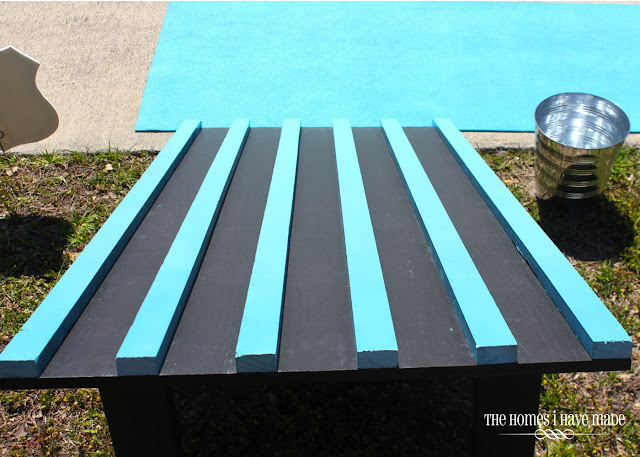 This little project was pretty simple, the whole thing was made using (mostly) pre-cut wood from the hardware store and some paint we had on hand… 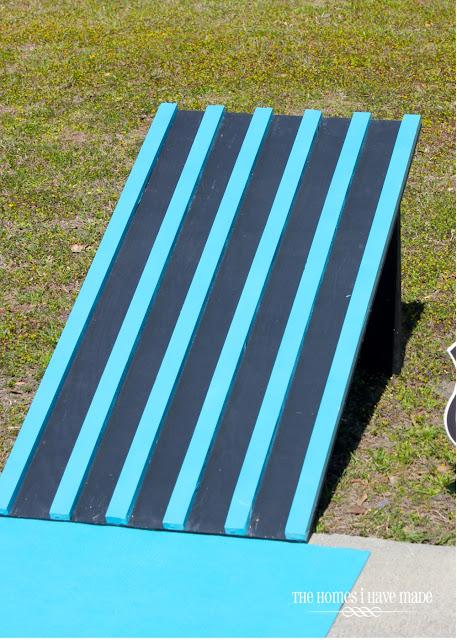 This project was completed in the flurry of last-minute party prep so I don’t have any “during” photos for you – but it’s not too complicated to see what we did.

From the hardware store, we purchased:

From the stash in our garage, we also used:

I started by doing all the painting – everything was primed first and then painted un-assembled. The 1″x2″s were given two coats of blue spray paint, while the plywood and 2″x4″s were primed and then given two coats of basic black paint. (Note – we actually only painted the top of the plywood surface, but I didn’t like the wood showing on the underside, so we went back and painted the bottom after the whole thing was assembled! It wasn’t so easy to do, so I would recommend painting everything before assembly 😉 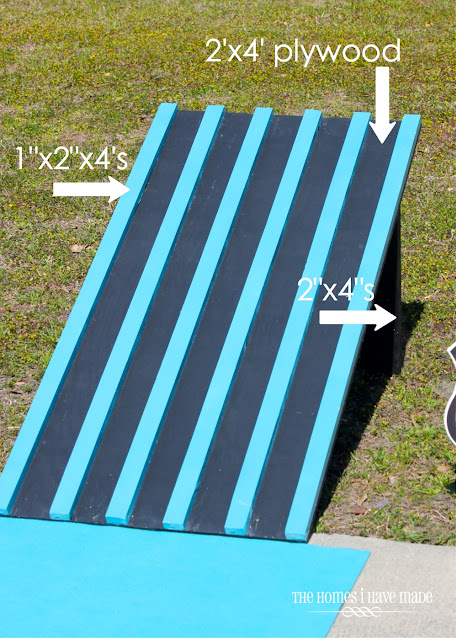 Once everything was painted and dry, Greg then evenly spaced each of the wood slats and screwed them to the plywood from the underside so the screws wouldn’t show. 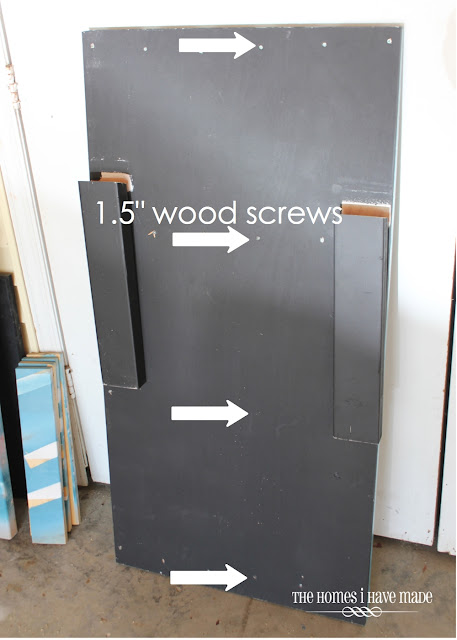 Next, he cut down some 2″x4″s to about 20″ each and gave the tops about a 25 degree angled cut. Party time was approaching, so this was a little trial and error and quick cutting, but it worked great 😉 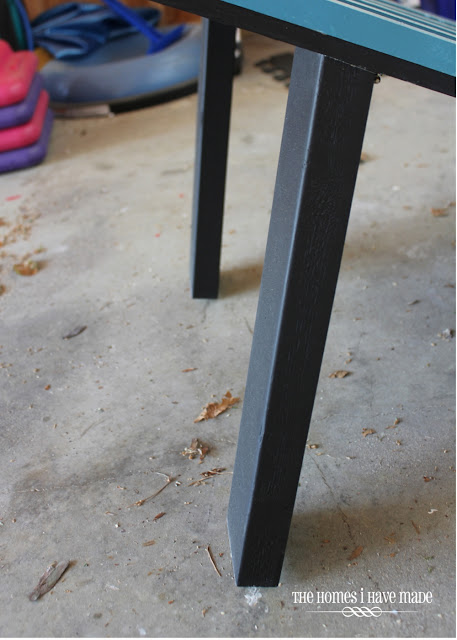 The kick-stand-style legs were attached with basic $2 hinges from the hardware store. 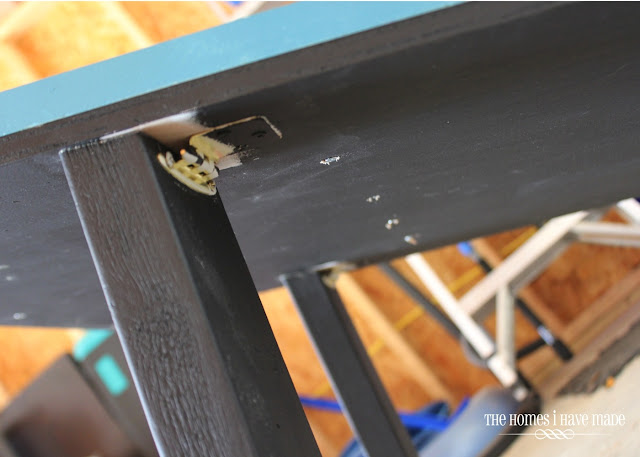 We found that matchbox-style cars flew down the ramp so fast they they crashed and rolled at the bottom. Fortunately, the cars I bought as party favors worked PERFECTLY! They raced down the ramp and rolled smoothly off at the end! 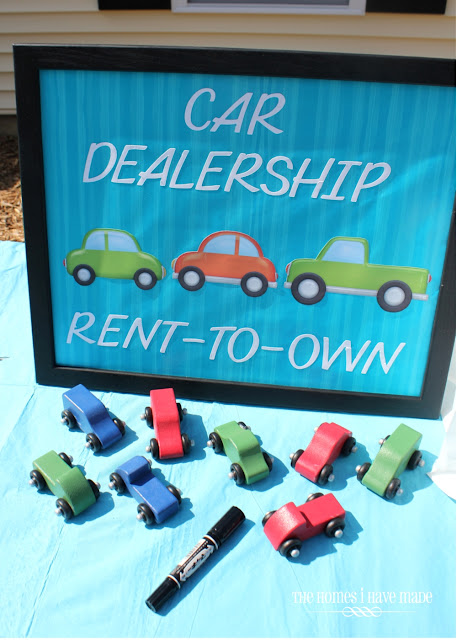 Here’s the birthday boy racing his car with some party guests! 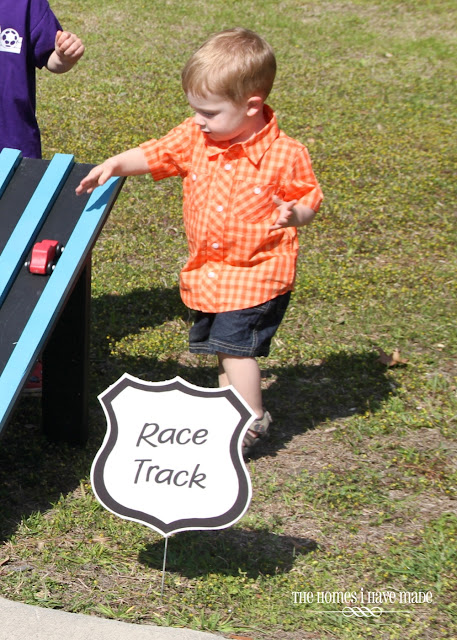 If you’re wondering what the blue surface is at the end of the ramp, it’s a yoga mat, LOL. We didn’t want the party favor cars to be chipped and dinged from hitting the cement, so the mat provided a nice “soft” cushion to land on. How convenient that we had a yoga mat to match the party decor! 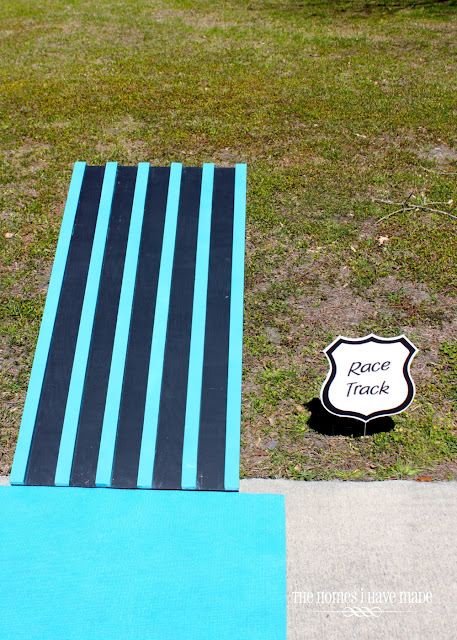 There was so much going on at the party that I can’t really give a testimonial for how much it was used or enjoyed. However, it’s still set up in the garage, and we race cars down it almost every day! In addition to the sandbox I made last summer, we have quite the DIY toddler play area set up outside!

I’ve caught the Spring Cleaning Bug, so I am working my way through the house organizing closets and cupboards and purging things we don’t need or love. I’ll be back on Wednesday with another party-related-DIY project for you – see you then!