posted by Megan on April 20, 2015 This post may contain affiliate links.

Last Friday, I showed you Henry’s planes-themed party reveal! (If you missed it, you can read all about it here!) Although I made a bunch of crafts for the party, one of my favorites was turning bubble wands into airplanes with the addition of some paper and staples! These were one of our take-home favors and were a huge hit with Henry and all the kids. While using my Cricut Explore made these super simple, they did take a bit of figuring out. In case you ever find yourself wanting/needing to transform bubble wands into airplanes, I’ve got you covered 😉 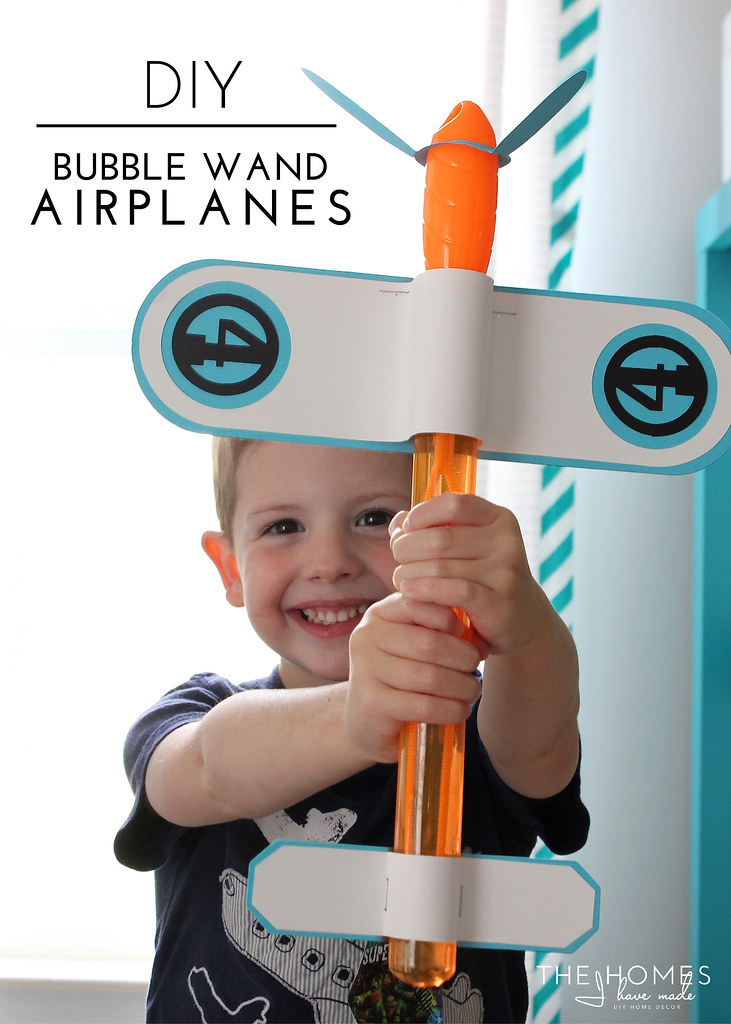 I got the idea to include bubble wands as favors when we were at another party that also gave them out. The kids LOVED them. Not only do these sticks blow bubbles, but they also work as great swords, making them pretty much the coolest things ever. I think they are also available at the Dollar Store…I found these at Target for $1 each. I grabbed a bunch in orange and blue, our party colors. 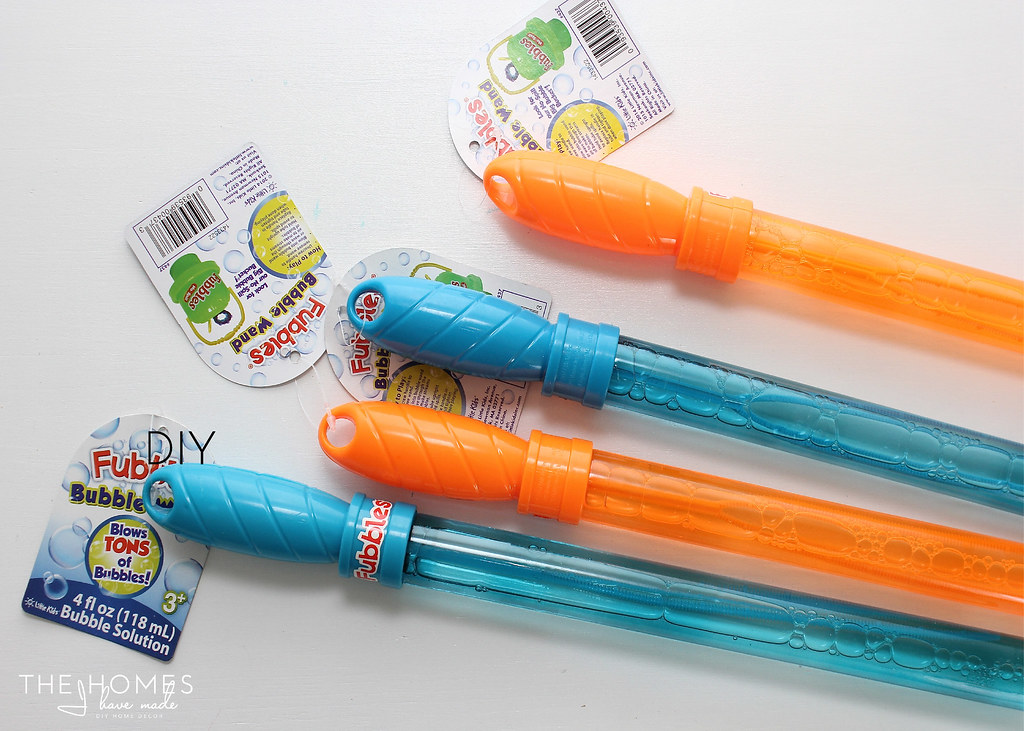 Using a couple different images from Pinterest as my guide, I decided that the bubble wands simply needed wings, a tail, and a propellor to look like airplanes. Figuring out the measurements and the fit took quite a bit of trial and error, but I ultimately landed on a set of cut files that fit the bubble wands perfectly. All of these images, except for the propeller, were available in the Design Space library (I imported and edited the propellor from an image off of Google). The blue and white wings and tails essentially work together to create sleeves that go around the wands.

For each plane cut:

A few things to note: 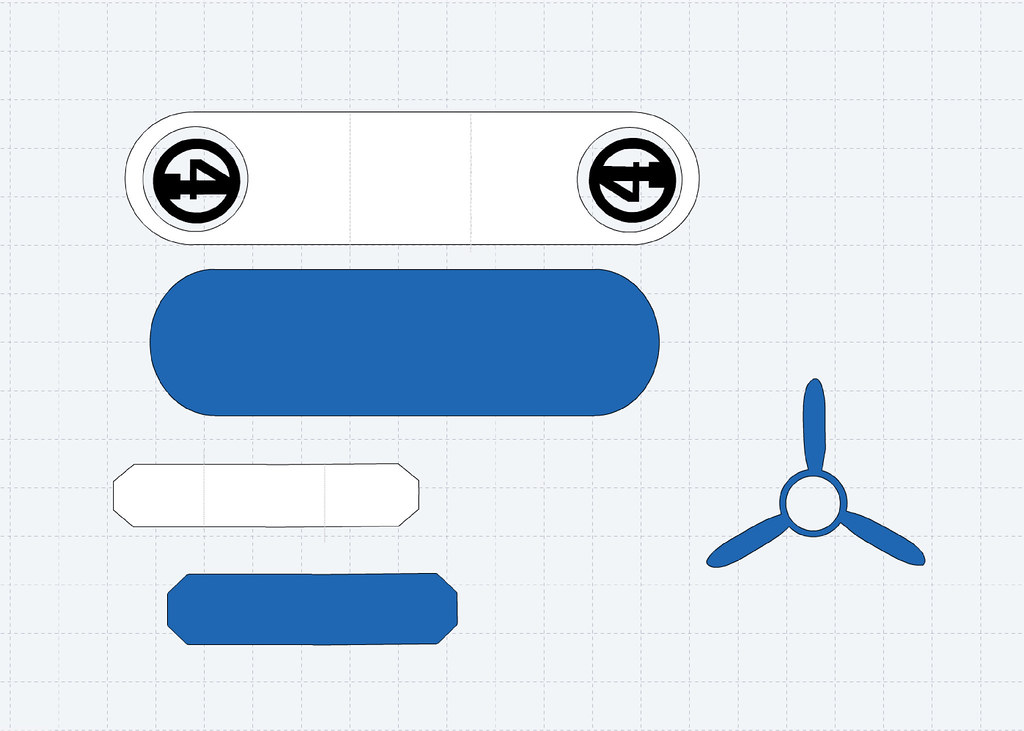 Once I had all the elements designed and fit to the wand just right, I cut out enough sets for all of our bubble wand favors… 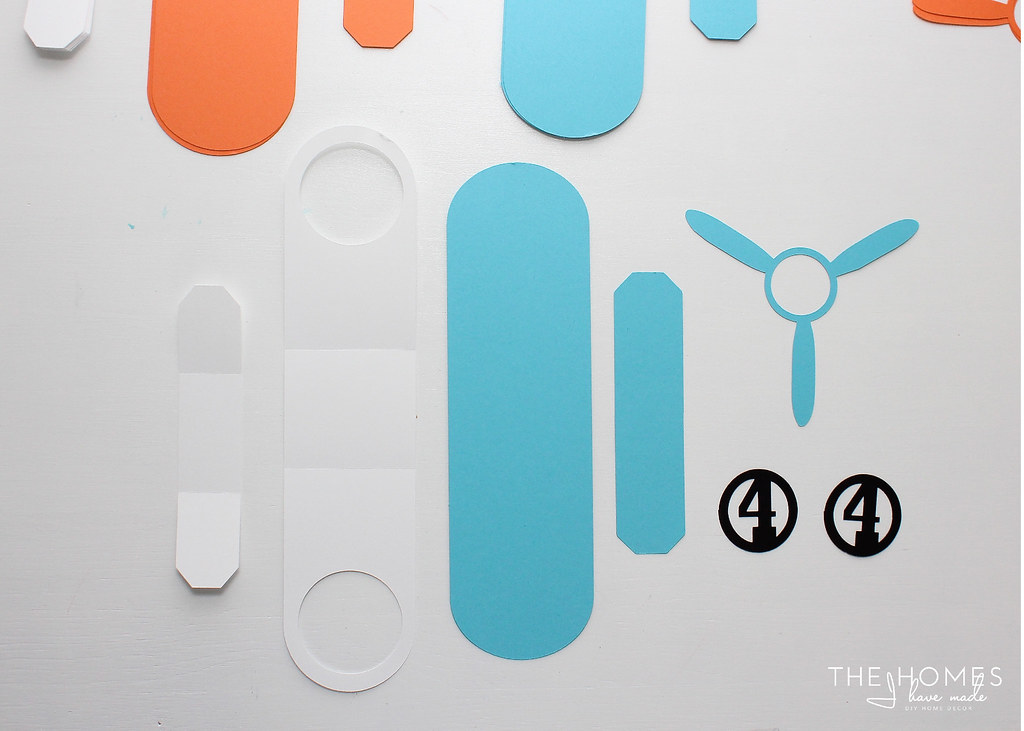 You can see both in the image above and below that the white cuts have score lines. These helped the paper crease nicely around the wand. To achieve these without a machine, just use a straight edge and a butter knife or knitting needle! 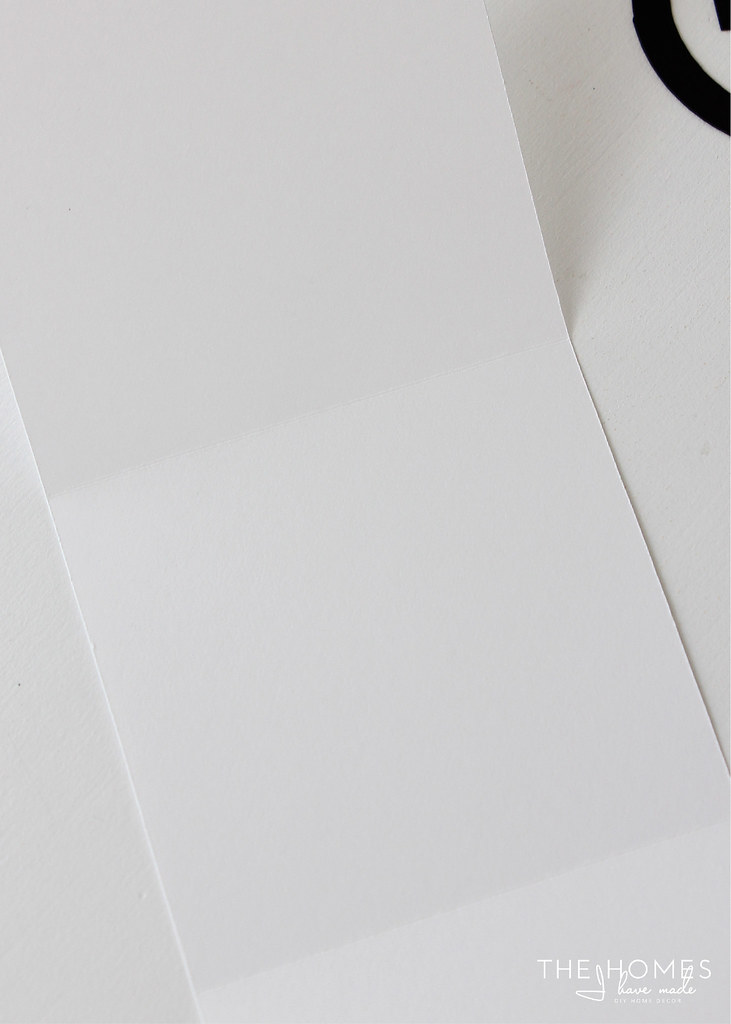 Start by attaching one end of the white wing to the blue base wing with roller adhesive. Glue the entire side of the wing from the edge to the scored line. 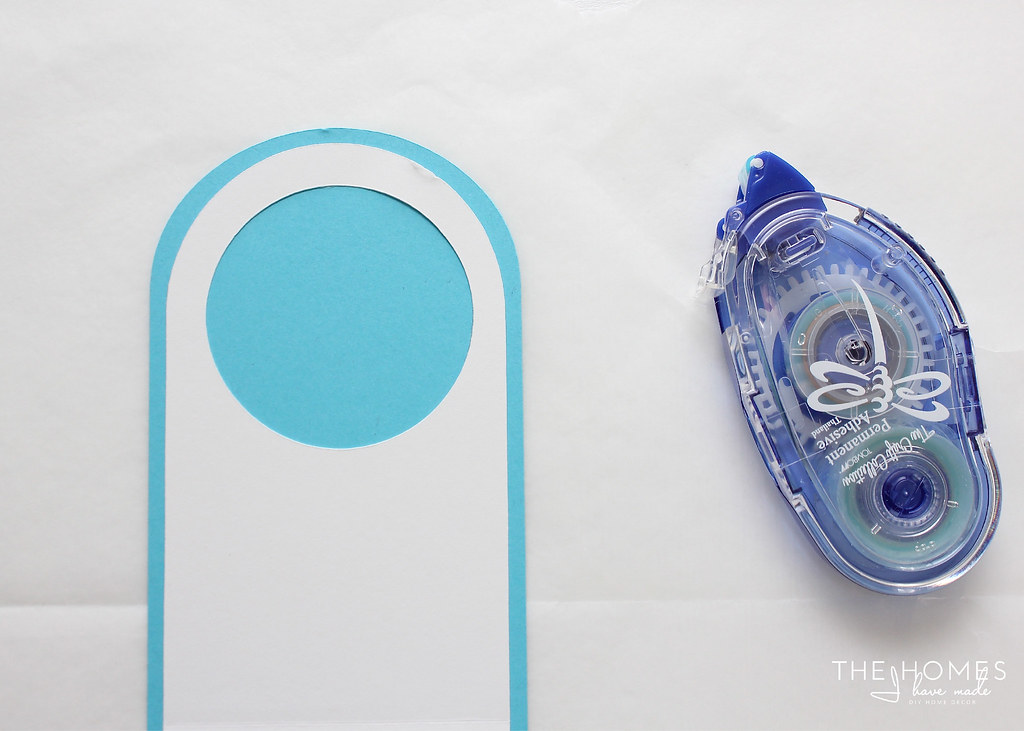 Line up and secure the other end of the wing with more adhesive, allowing a tunnel to form in the center of the white paper. 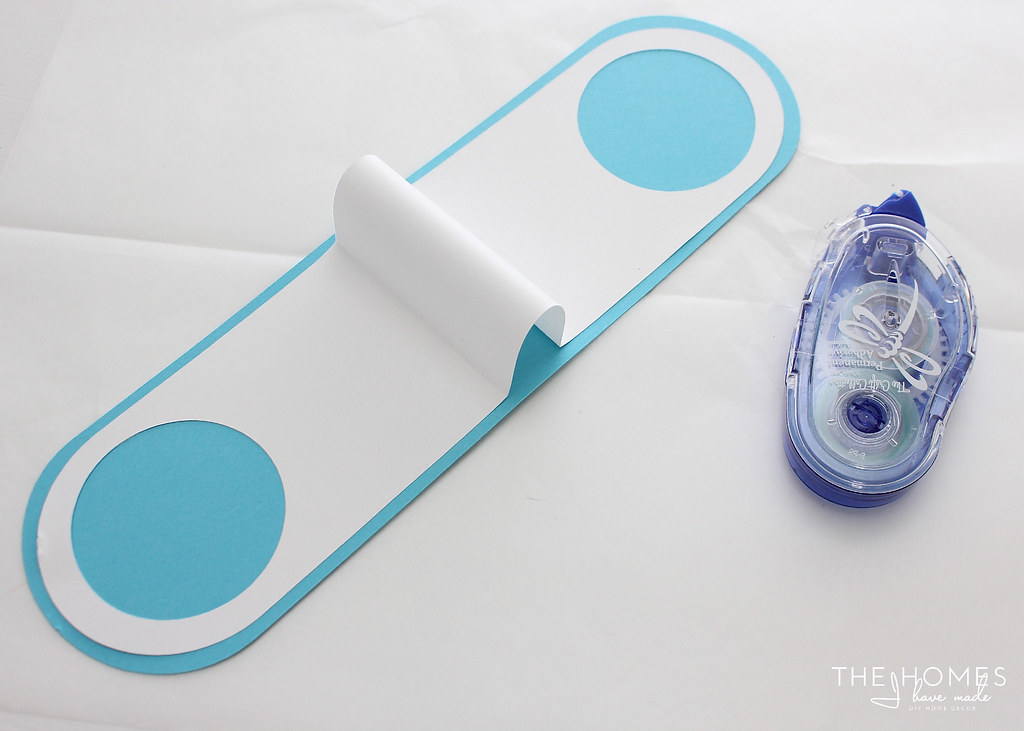 Add the cutout numbers to the edges of the wings with more adhesive. We chose the number 4 for all the airplanes since it was Henry’s 4th birthday party. 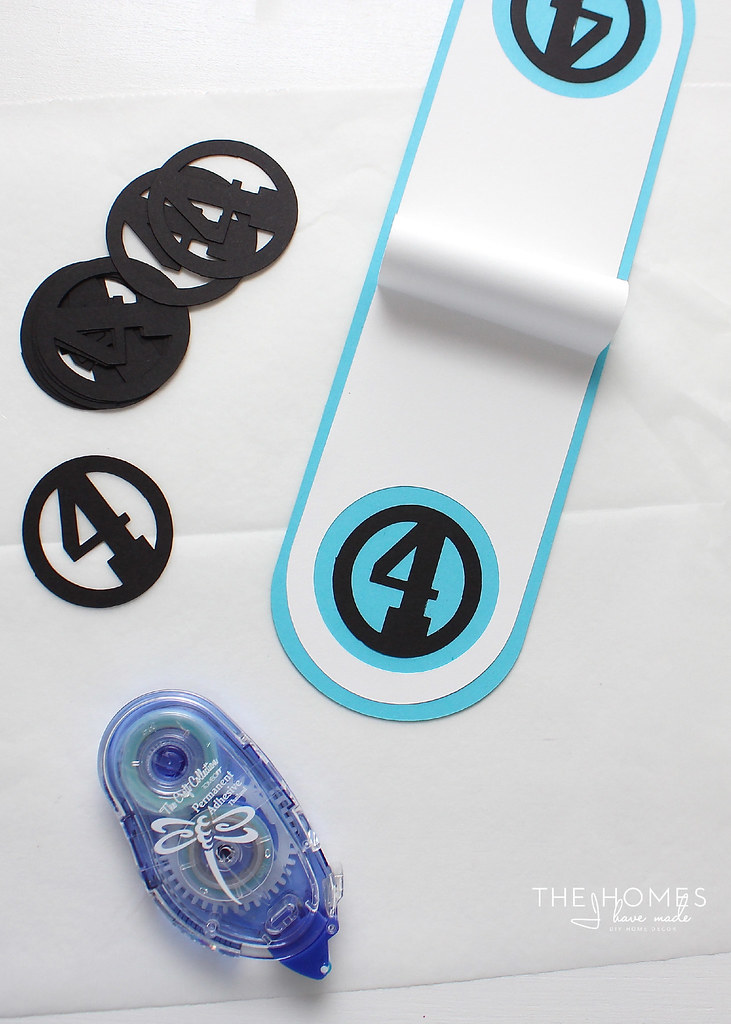 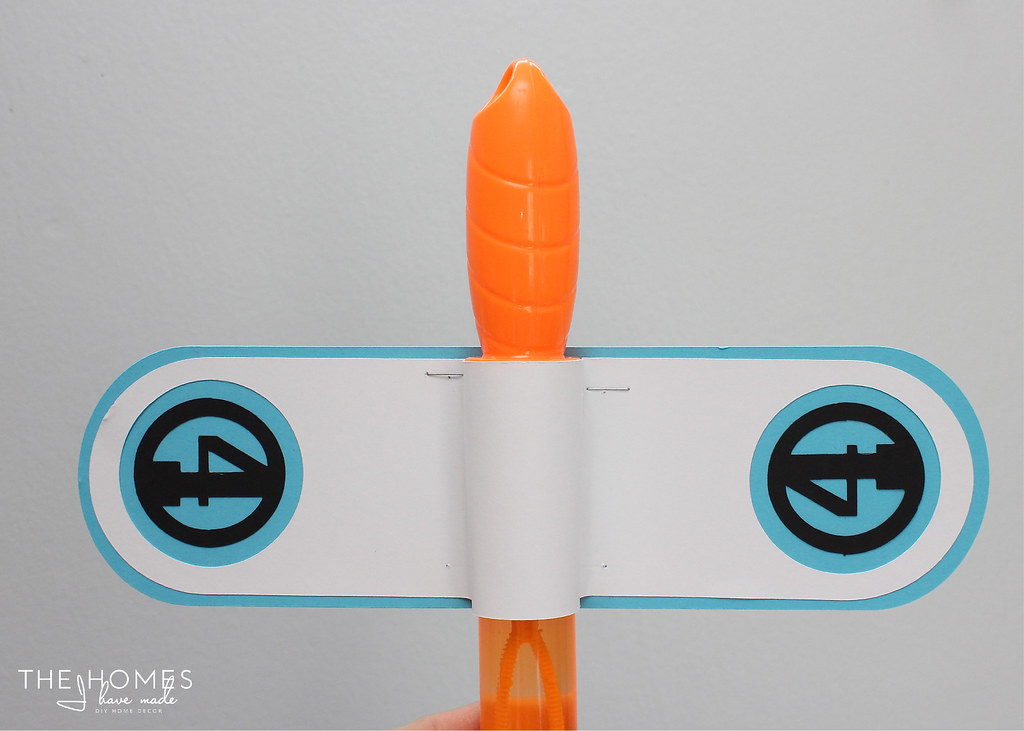 Next, repeat the same process for the tail…glueing the white to the blue, leaving a tunnel in the center, sliding it over the end of the bubble wand, and securing with staples! 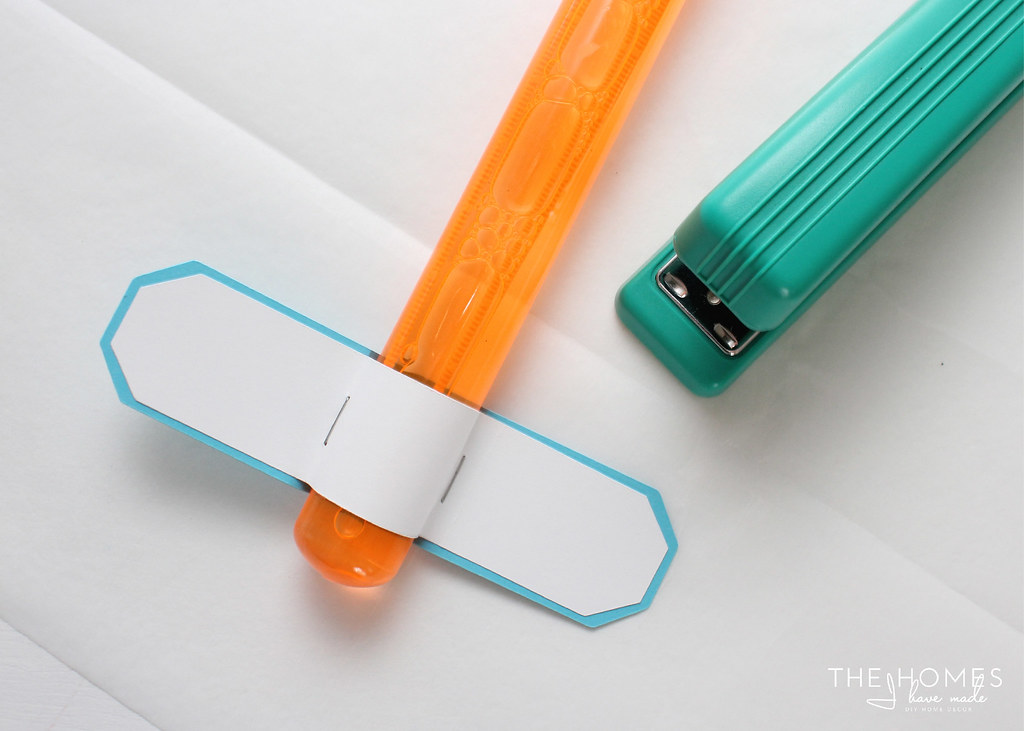 The propellors proved the trickiest to fit and secure. After rounds and rounds of playing with different sizes, I finally had a propellor that was wide enough to carefully wiggle on to the wand handle and stay in place. If it was too big, it slid all the way down; if it was too small, the paper would easily rip. A 1″ diameter allowed the propellors to squeeze on and stay put, mostly! 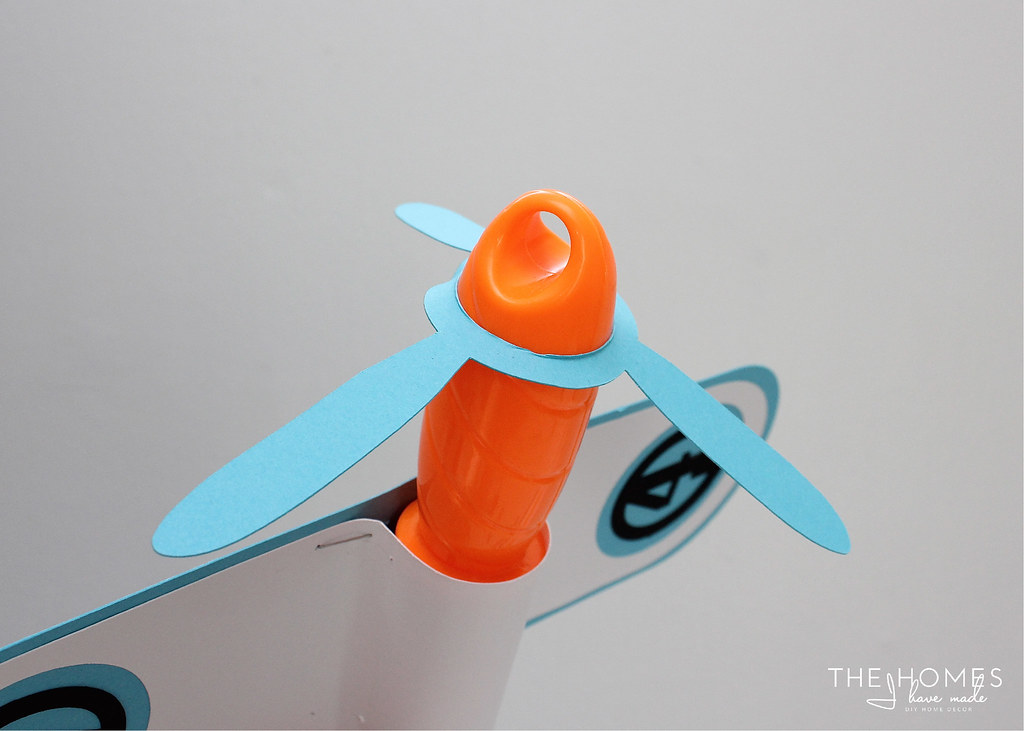 Once I had the propellor gently wiggled on, stretching the paper every so slightly, the propellors angled down. I then bent each one up, creasing at the base of the propellor wings. These were on pretty snug so I didn’t secure them any further. You could always attach them to the bubble wand with more adhesive or tape! 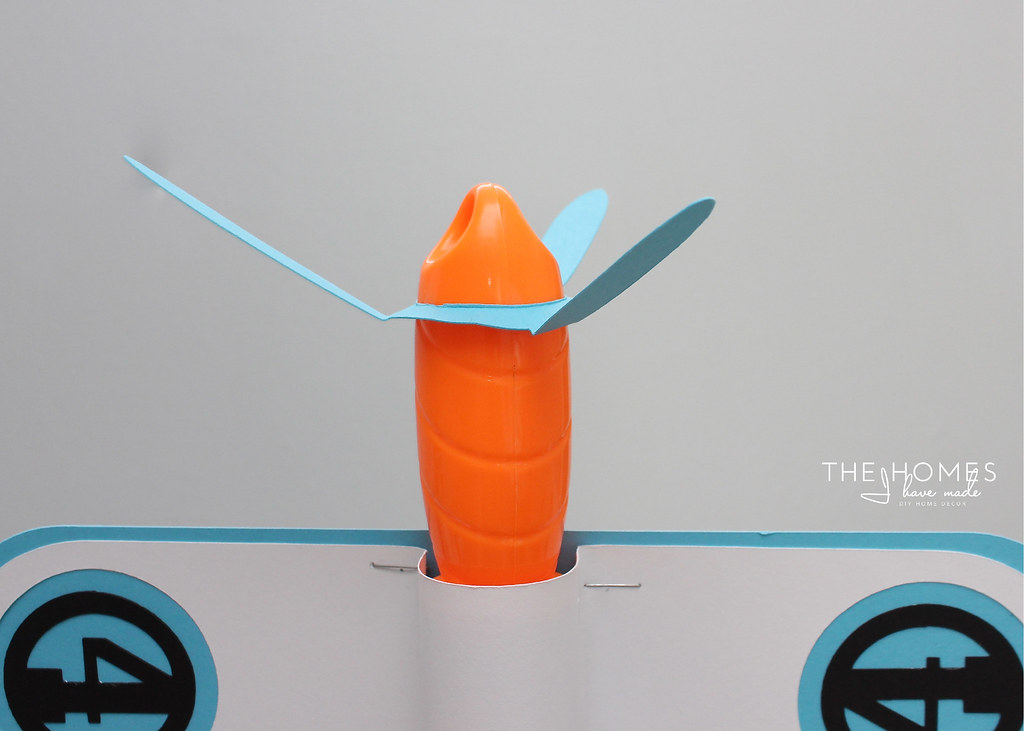 With the propellors on, they officially looked like airplanes, and Henry was obsessed! 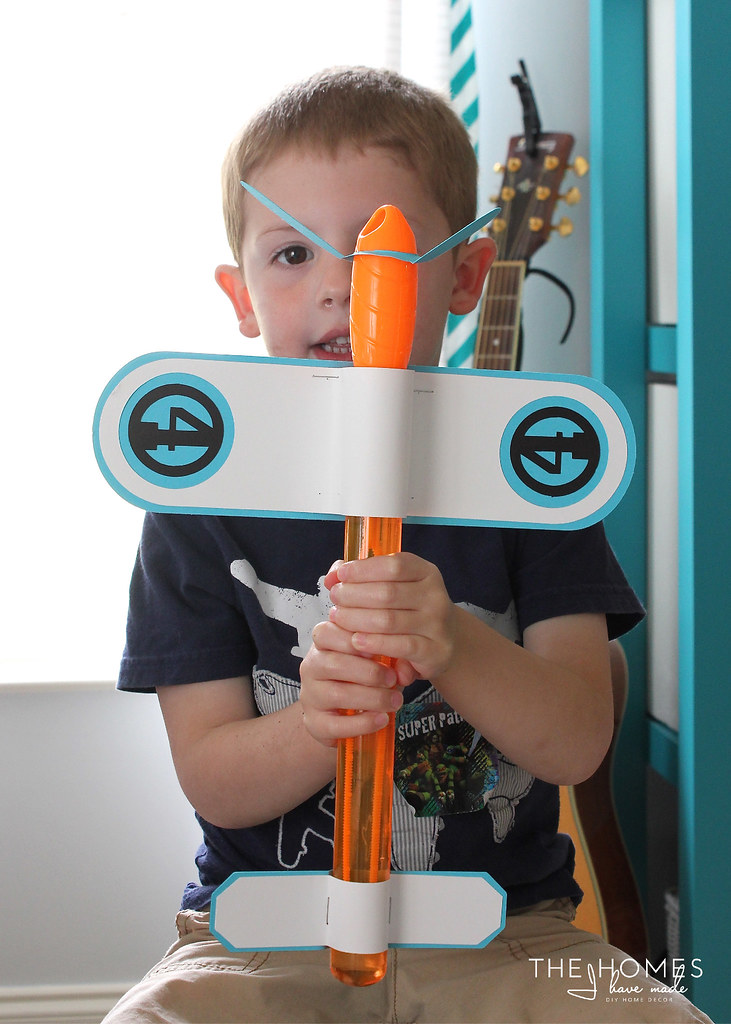 He loved watching these come together (and playing with the prototypes as I figured out the sizing). He also loves to run my Cricut for me now. He pushes the right buttons and watches, memorized, as it cuts all the images out! #startthemyoung 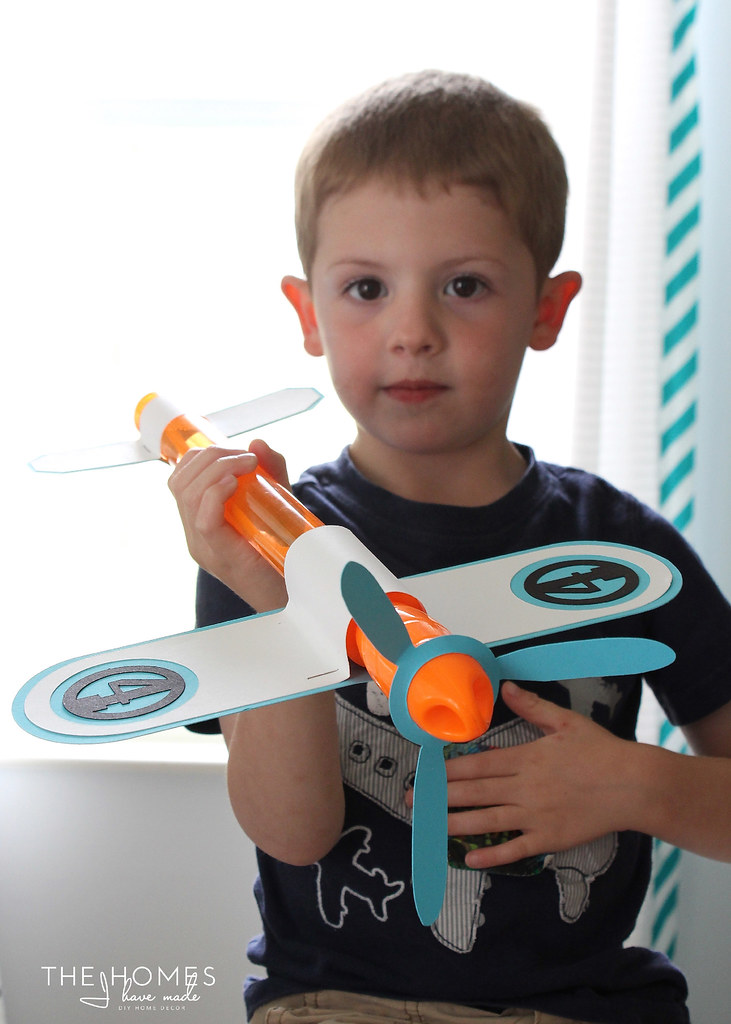 Silly kid! But it was a total fluke that he had his airplane shirt on when I snapped the pictures of these, I swear! 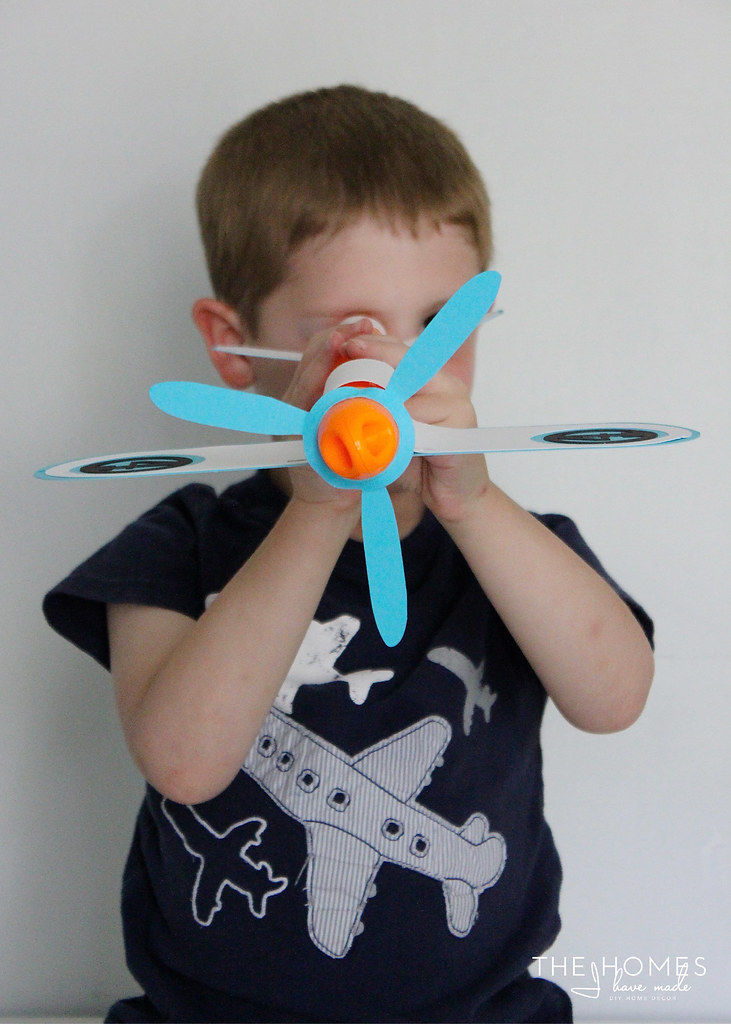 The planes looked adorable and were just so fun to figure out and create! They were the perfect favor for the kids to take home and play with! It might go without saying, but to use the bubble wands to actually blow bubbles, the wings and propellor need to come off! 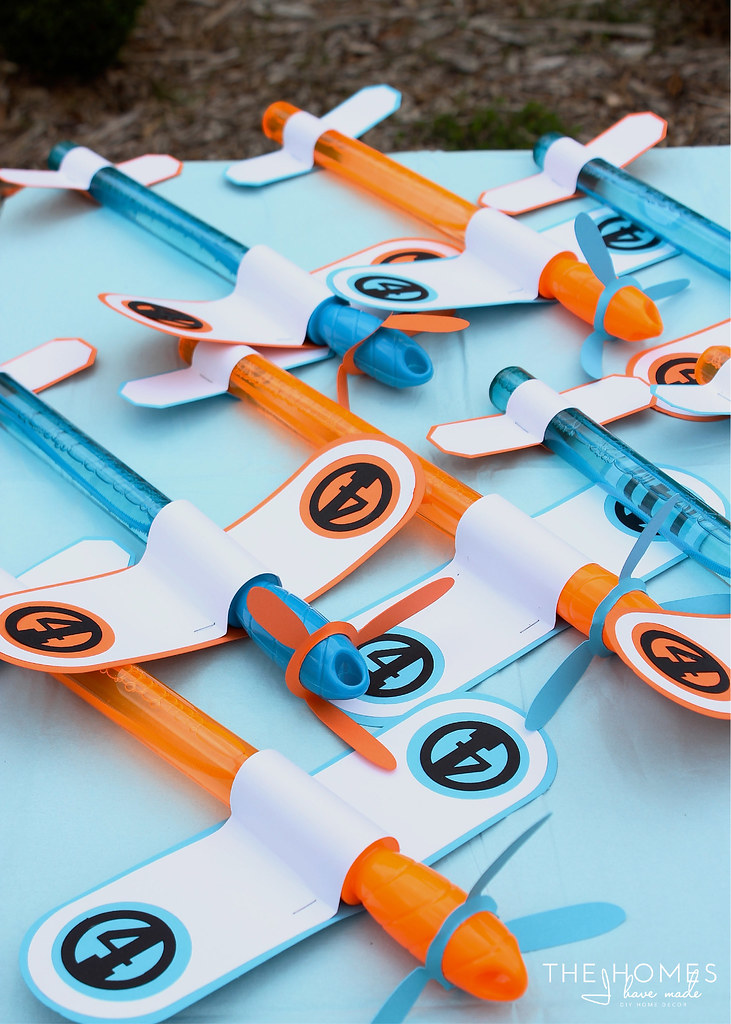 I hope your week is off to a great start! I’ve got a busy one ahead – fingers crossed I can keep all my various balls up in the air! See you back here Wednesday with a downloadable file that will make your next garage sale a breeze!