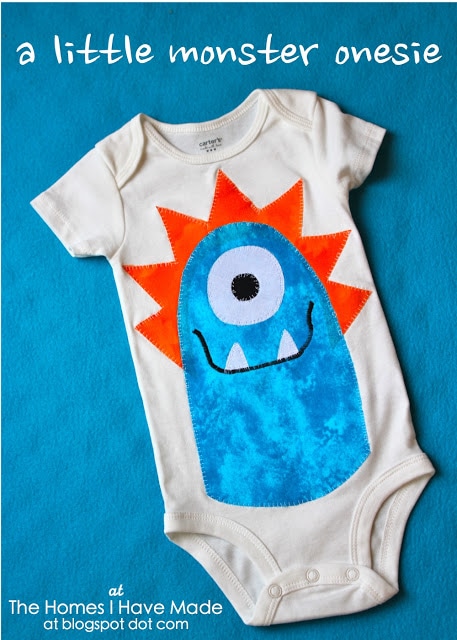 Wow, yesterday was such a fun day with my feature over at IHeartOrganizing! Did you see it? If not, you can read it here! I have been really excited about all the buzz and excitement over my menu board! I’ve received tons of compliments and kussos (and even a few questions…I’ll do my best to sneak in a follow-up post to answer them!)  I’ve said it before, but I’ll say it again…you all sure do know how to make a gal feed good! Anyway…As promised, I have a few more monster projects to show you! I hope you’re not sick of them yet, because I saved my favorite two for last!  Today, I want to show you how I made this:

I started out here: 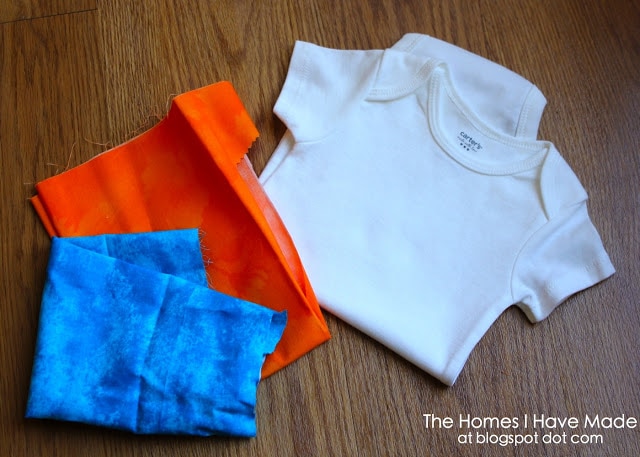 More details after the jump!

I got this idea for where else but Pinterest! These were my “inspiration pins!” 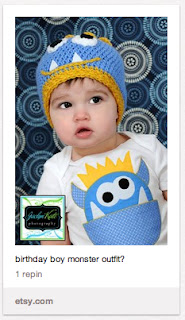 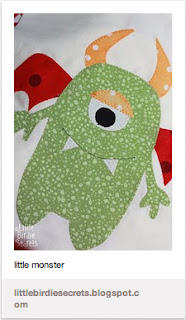 My original plan was to “wing it,” using these photos for inspiration, until my mom found and bought this quilt pattern! 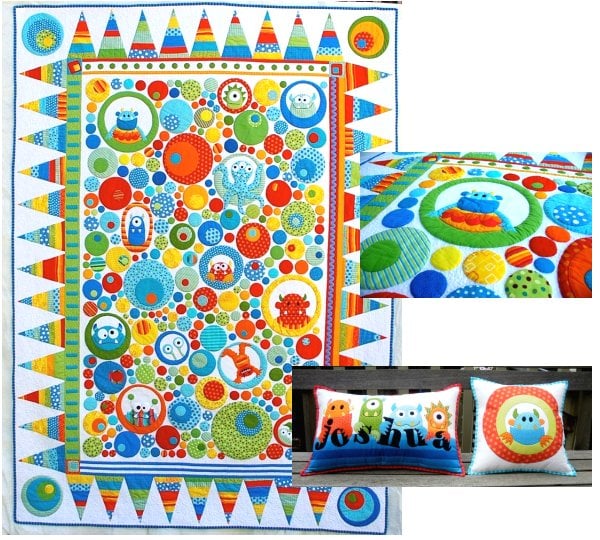 If you look closely, there were lots of yummy monsters to choose from!  Because I was working on a long, skinny onesie, I thought the longer, skinnier monsters would work perfectly. I had such a tough time deciding, because I liked different elements from each one! In the end, I combined two monsters to make one! If you look at the image below, I used most of the green monster (second from left) and added the hair of the monster on the right! 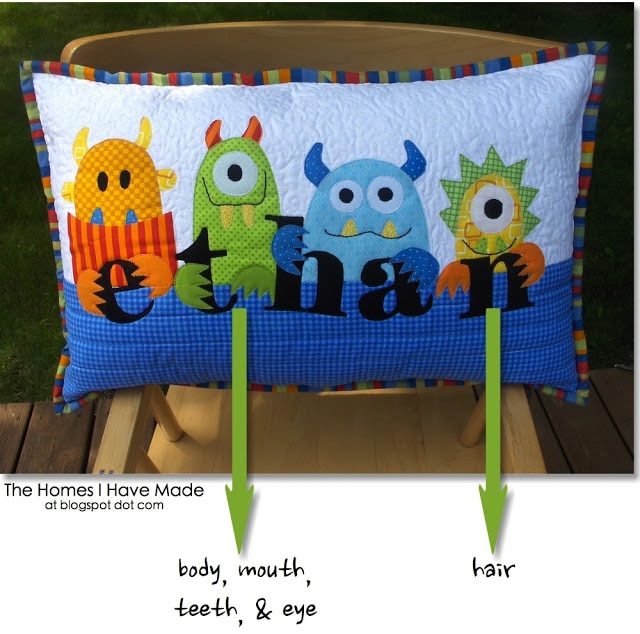 The nice thing about using the quilt pattern was that all the appliqué pieces were included, scaled to fit together and ready for me to trace and cut out!  AFTER fusing my fusible interfacing to all my fabrics, tracing the pieces on the right colors, and cutting them out, here is what my monster pieces looked like! 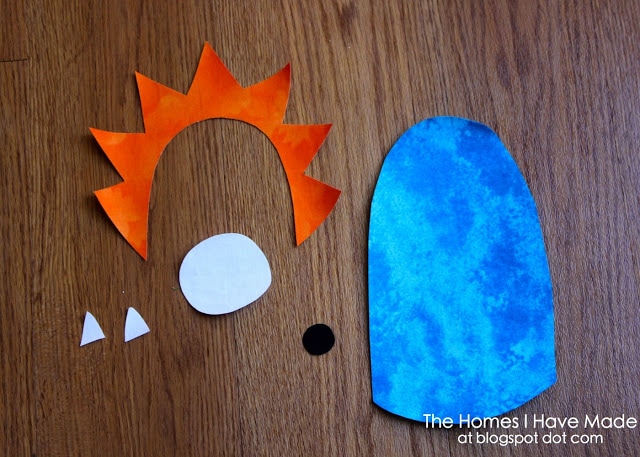 I next ironed all my pieces to the onesie, putting the little guy’s face together as I went!

Then came time to stitch around each piece – eek!  I kept putting off and putting off the stitching step because I was nervous about messing it up, but then it occurred to me that you only learn (and get better!) at these things when you actually DO them.

Since I am NOT an expert appliqué-er (in fact, I’ve really only done it once… ) and because this project had a lot more shapes and angles, I did a little practice on shapes I free-hand cut from fabric. This is a really good idea before you sew on your real project, especially if you don’t have extras (to start over if you really mess up!). 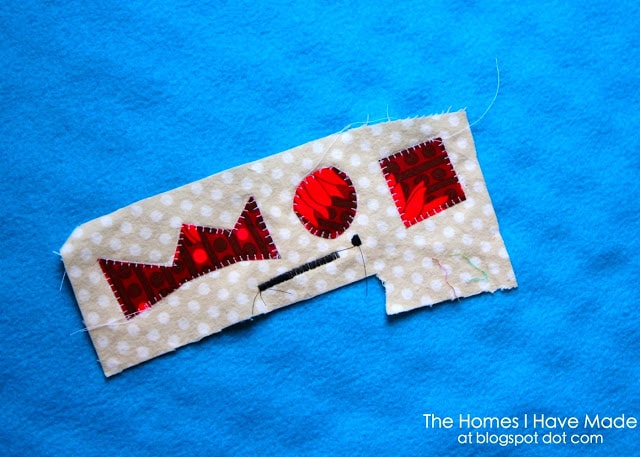 Once I felt moderately comfortable in my skills, I literally just went for it. Off I went, stitching around this little guy piece by piece (wrestling with stabilizer every inch of the way!). I used a blanket stitch, all with white thread (because I like to see the stitching!). The last thing I added was a line of stitching for the mouth – just using a really dense satin stitch.

I was thrilled with the final result – mostly because I successfully appliquéd the whole thing without sewing the front of the shirt to the back – not an easy feat with such a small shirt – hah!!!! 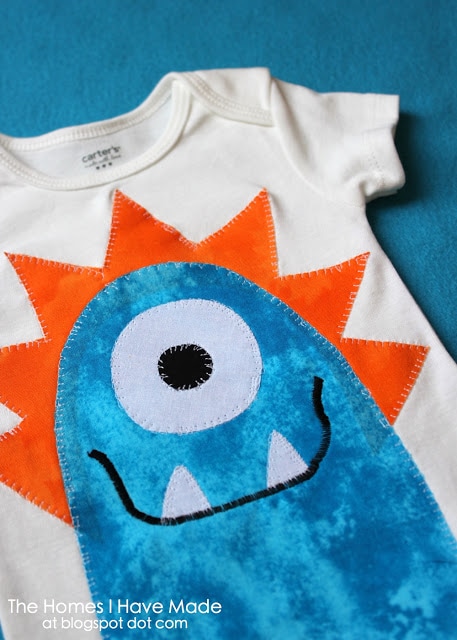 Isn’t he just the cutest?!? He turned out exactly as I’d hope, and he was actually very simple when all was said and done! 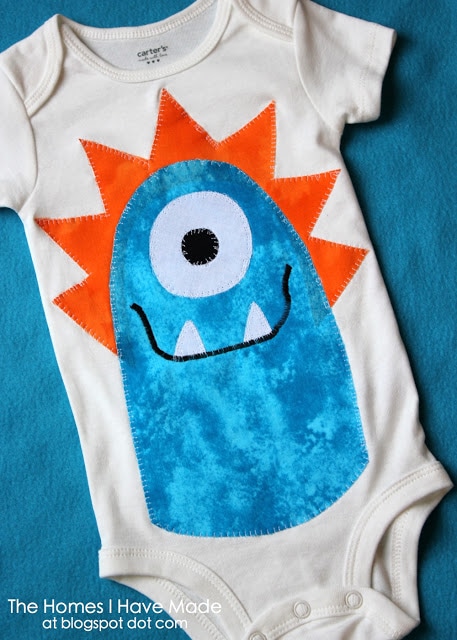 Here’s my little man all dressed for his birthday party! 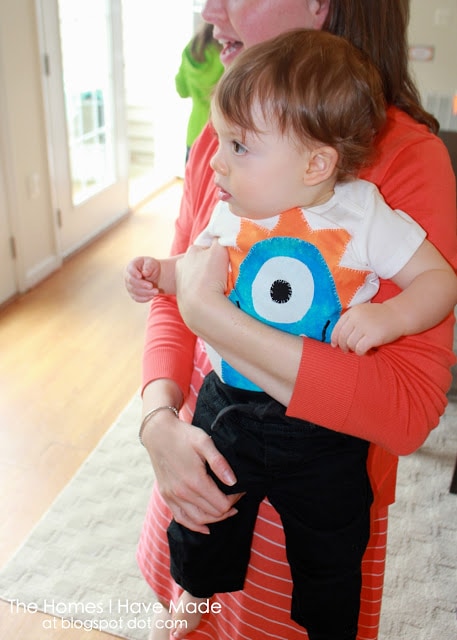 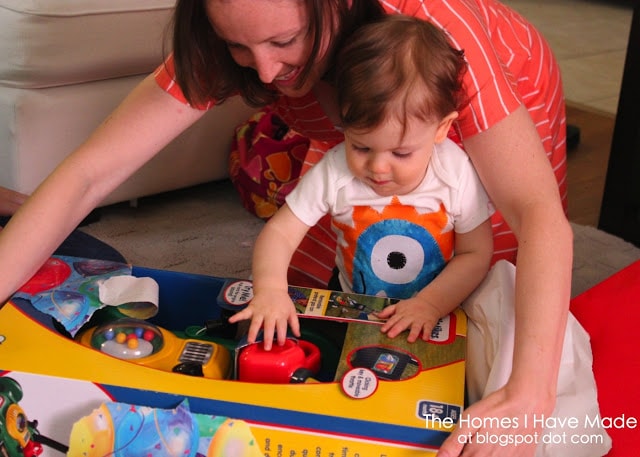 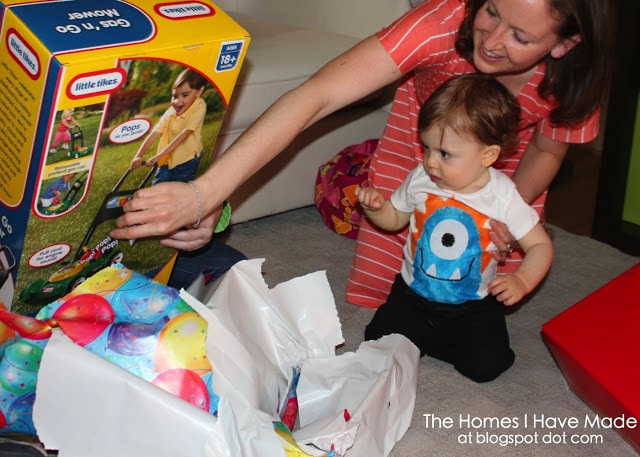 It was such a fun project to make! Not only did he coordinate with the party, but he looked just adorable with that silly monster on his tummy! AND I learned a knew skill AND built my confidence for trying something out of my comfort zone – fun, fun,  fun! 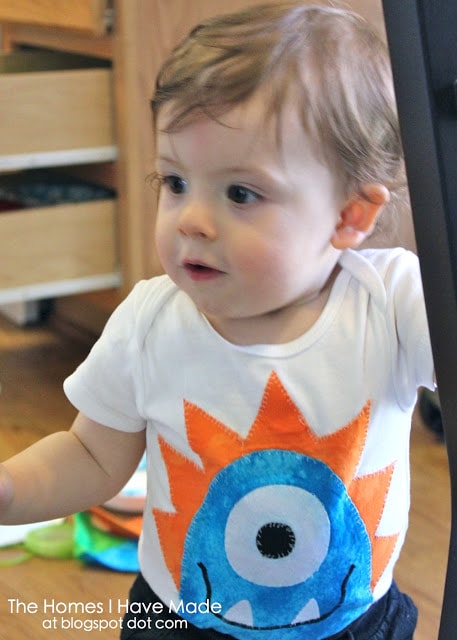 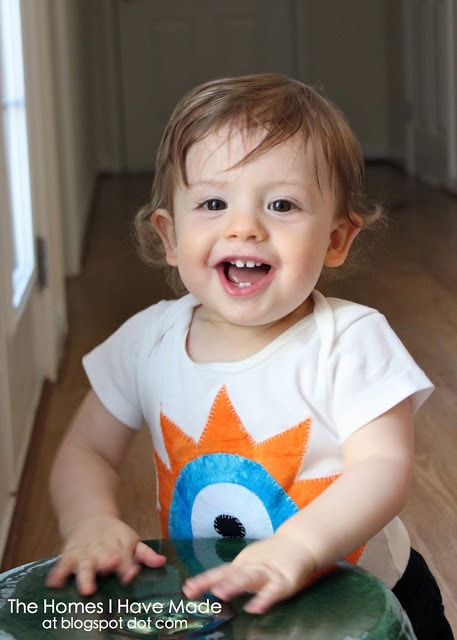 Last monster project coming up on Monday – my “Adopt-a-Monster” stuffies!

Have a great weekend everyone! 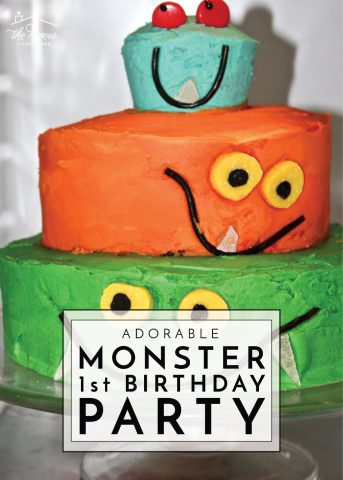 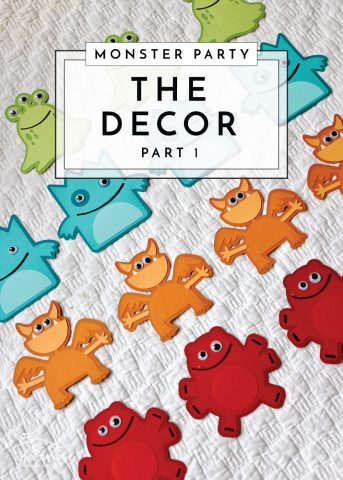 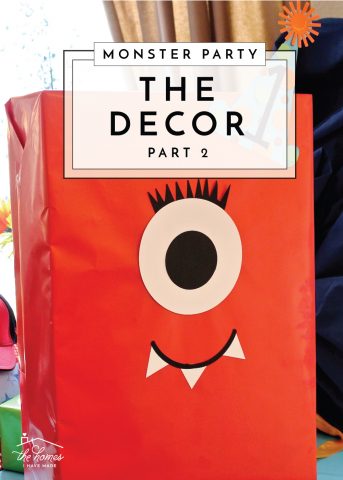 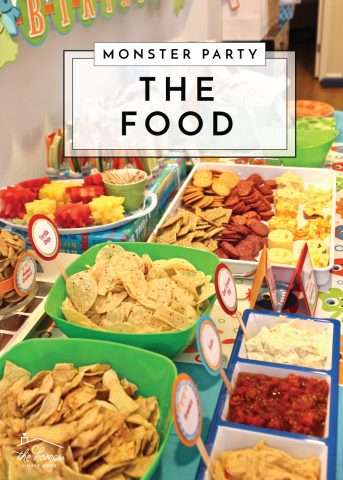 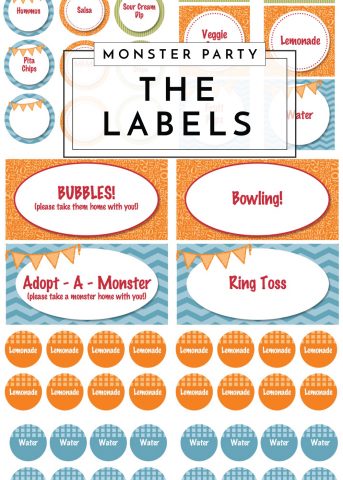 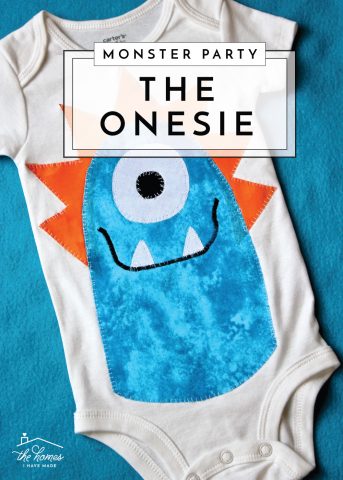 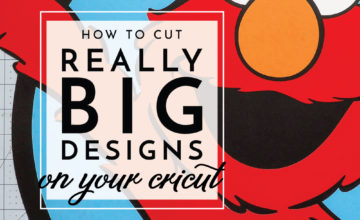 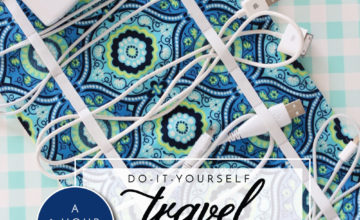 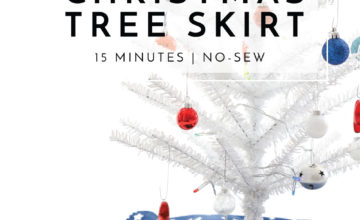 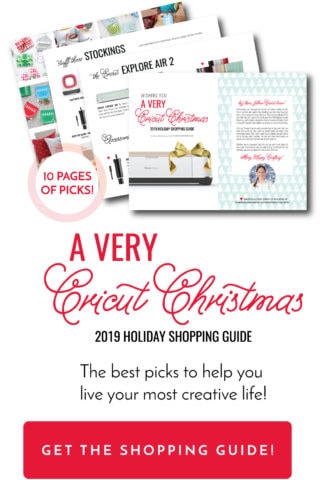