Follow me:
Home » Other » Quick Updates in the Baby's Room

Quick Updates in the Baby's Room

posted by Megan on August 6, 2012 This post may contain affiliate links. 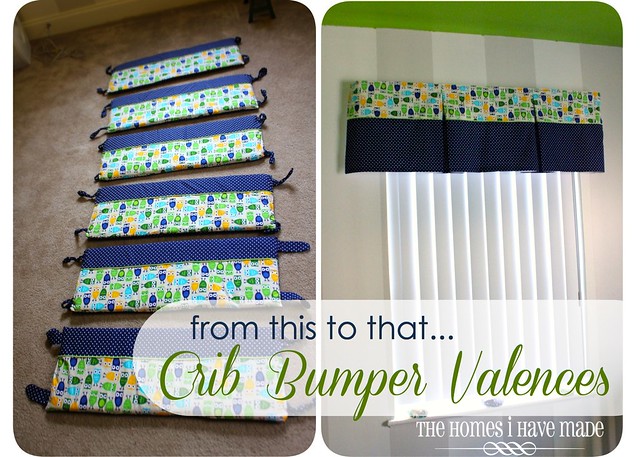 My mom had an unexpected opportunity to come visit us very shortly after we moved in. While I know she was mostly coming just to see Henry ;), I didn’t waste this opportunity to put my uber-crafty Mom to work! In all fairness, I did warn her: “If you come, bring your sewing  machine because I am putting you to work!” A week later, she showed up, sewing machine in hand and ready to start working on the  To-Do List I had building in my head! During the days, we ran errands, played with Henry, and hung out; but during the evenings, after Henry was in bed, we were able to crank out a few big projects that I wouldn’t have gotten to for weeks, as well as a few small nagging projects that are just nice to have off the list! Two of these projects were in the baby’s room!
If you’ve been coming around here for a while, then you may have noticed on the Inspiration Board for Henry’s room that we are not doing much “re-design” at this time. This room will probably get re-done at some point down the road, either when Henry gets a sibling to share his room with or we transition him to a “big boy” room. So for now, the owls are sticking around, and we are going to adapt a lot of the things from his old nursery to his new room. When I first revealed Henry’s Owl Nursery, I showed you the pretty bedding that I made him. But then a little while later, I wrote in this pretty popular post that the crib bedding, the bumper and crib skirt in particular, were not only a big time wasters, but also big fabric wasters. These two projects used up a ton of my gorgeous fabrics, and since I never used the bumper and the crib skirt no longer fit once we lowered the crib mattress, it’s always irked me that they sat in the closet un-used!
As I stared as these six, identical crib bumpers, I just had a feeling the fabric could be put to better use…and what do I almost always think of first? New curtains! After a quick pow-wow with my Mom, we had a plan to turn these crib bumpers… 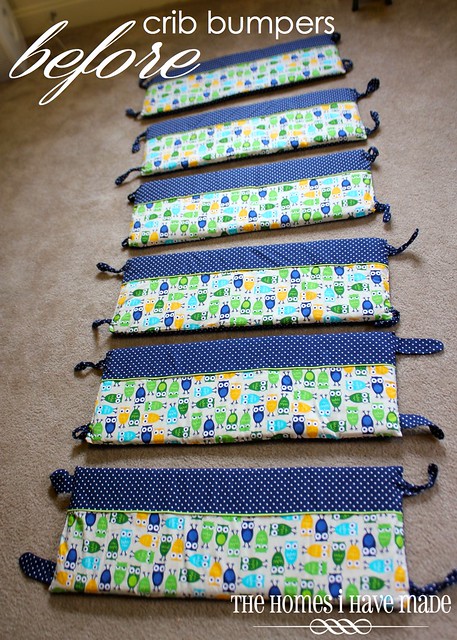 into these new window treatments! 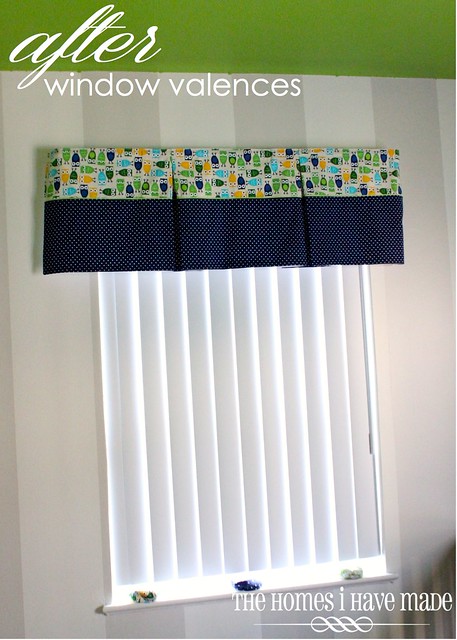 Here’s how we did it!

1. Pull Apart Bumpers. The first step was to pull apart the crib bumpers and remove the cushions that were inside. Since I put these together, I knew the bumper sections were each big pieces made of two fabric rectangles. We pulled open the side seems using a seam ripper and then ironed them out flat. We were left with six 25×35″ rectangles. 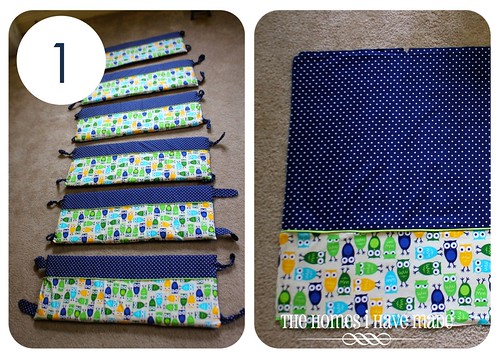 2. Sew rectangles together. Since we had two windows and six rectangles, we evenly divided the old bumper sections to each window. With right-sides-together, we simply sewed three rectangles together (length-wise) for each window valence; and pressed the seams open. After we had the panels sewn together, we trimmed the height of the panels to measure 17″ (our final height would be 16″). (Sorry for the yucky photos, like I said, we were working at night!) 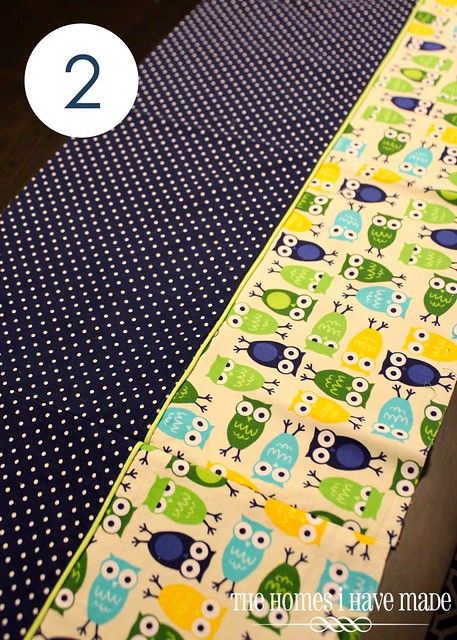 3. Line the valence panels. We then lined each panel with cheep curtain lining fabric. We didn’t bother laying out the fabric, we just cut a lining strip the same dimensions as our curtain panel (now 17X105″). 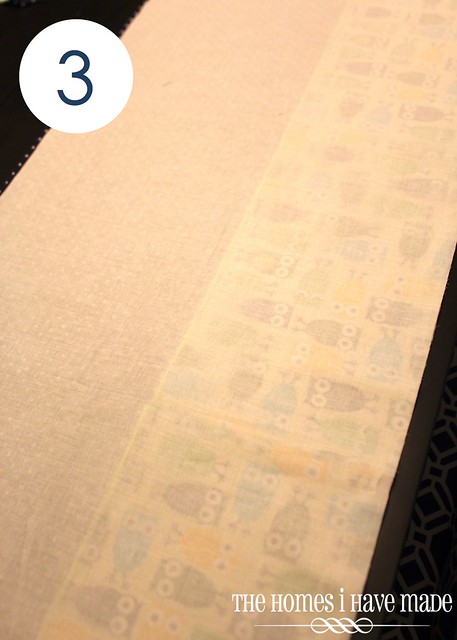 With right-sides-together, we pinned and sewed the lining to the curtain panel, leaving an 8″ gap open for flipping it right-side-out. By the way, are you like me and  ALWAYS sew this intended opening shut? Ah! How many times have I had to go back with a seam ripper to re-open my flip hole! A little while back I divised this “pin” system to remind me to stop and start as I am chugging around (and spacing out) on a really big piece like this! 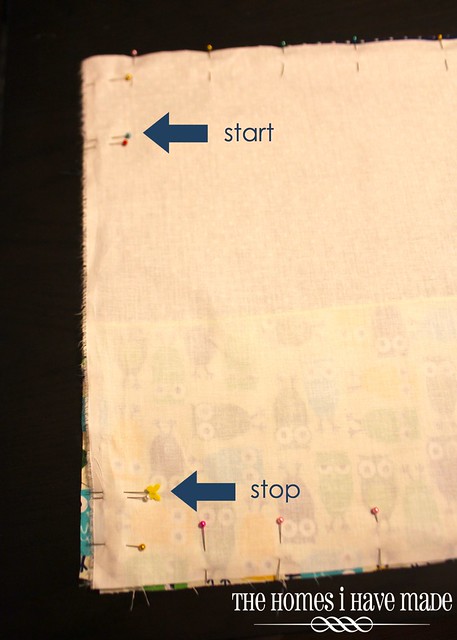 My mom also taught me that instead of leaving your needle down and turning your fabric at corners, you can get stronger corner seams by running right off the edge. To flip it with tidy corners, you trim it like this! 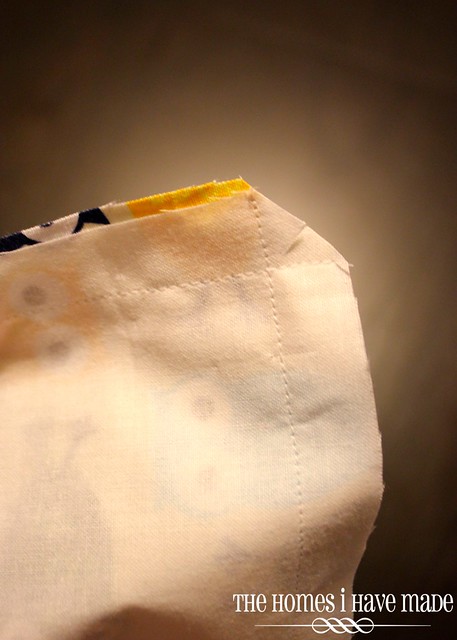 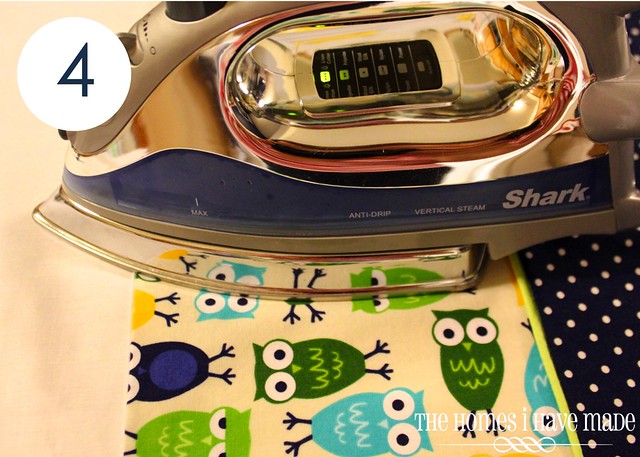 5. Determine pleat measurements. My mom did all the sewing algebra here, but it’s pretty easy to figure out your pleat measurements based on your window width. The key is not to measure your fabric, but your valence rod. We used this curtain rod: 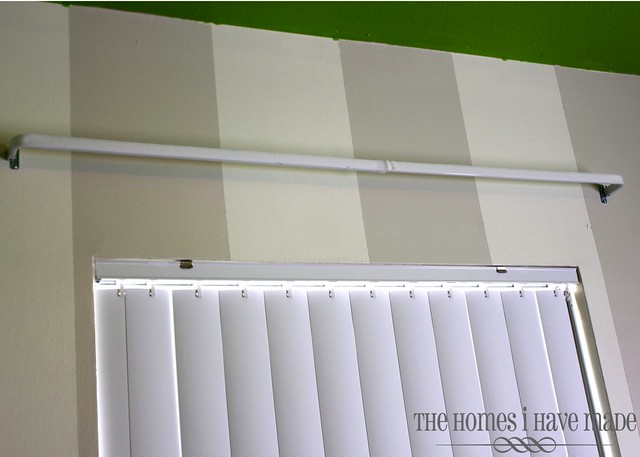 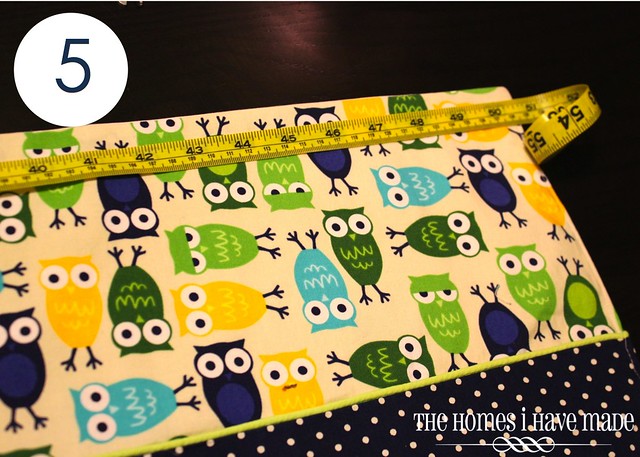 Final valence width (determined by your window/rod width) / Desired number of pleats = width of pleat/distance between each pleat.

6. Pin pleats. (This may get a little confusing, but I will do  my best to explain it!) To pin out your pleats, start by folding your panel in half and finding center; mark it with a pin. Then divide your pleat width (in my case it was 17″) in half (in my case: 8.5″). From your center mark, measure your 1/2 pleat measurement in each direction. Mark these spots with a pin. 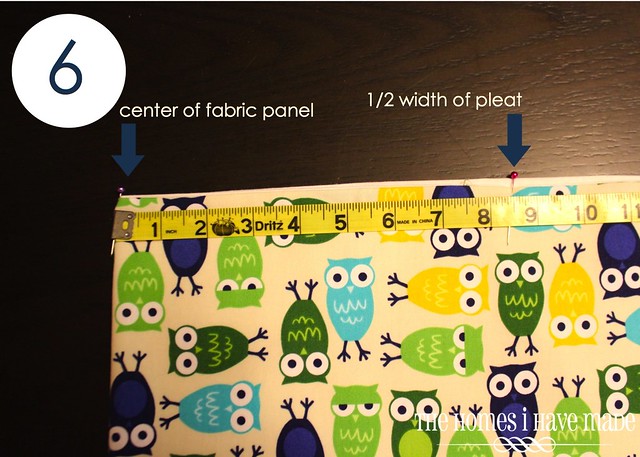 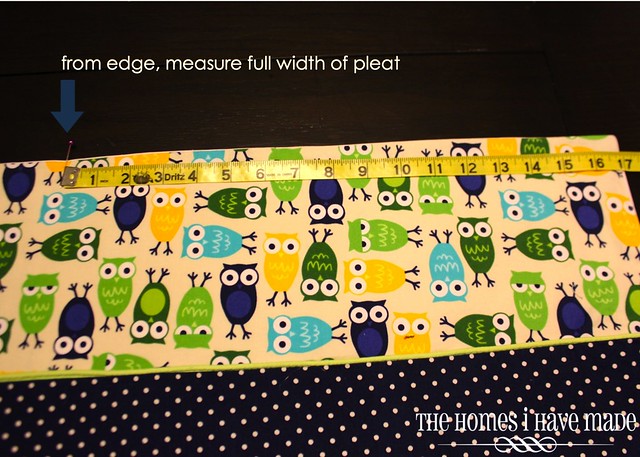 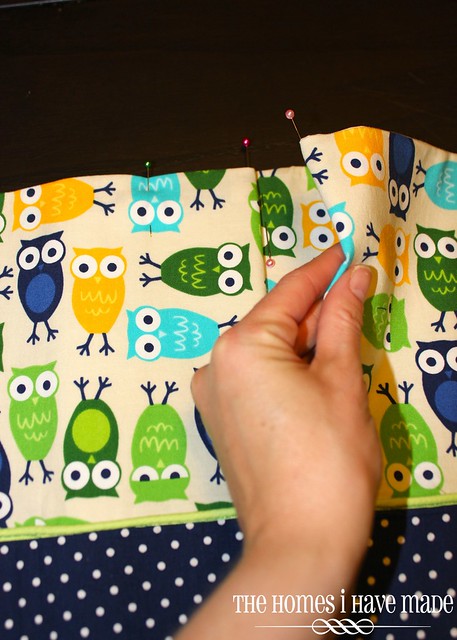 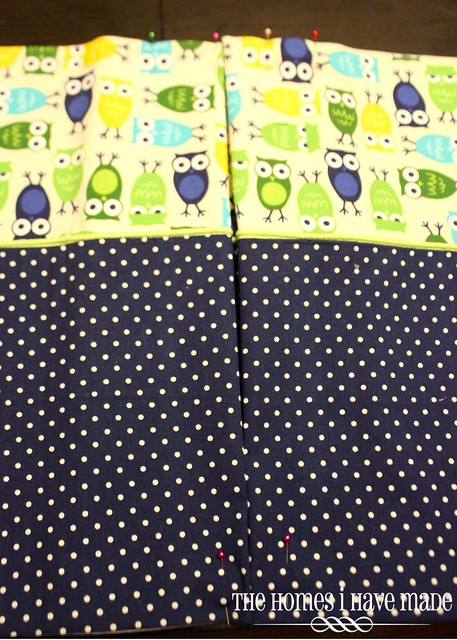 7. Pin and sew on Velcro. Remember when I said I had a project that left me with a bunch of Velcro?!? Here’s the original project! (NOTE – you can certainly baste your pleats in place before this step if you are worried about them slipping; but we found we could sew the pleats and add the Velcro all in one swoop!) Flipping over to the back of the panel (with the pleats still pinned down the front), we pinned the “loop” side of the Velcro all the way across the valence panel. We then finished the valence by sewing the Velcro on along both the top and bottom edge of the Velcro. By sewing on the Velcro, we also secured the pleats. 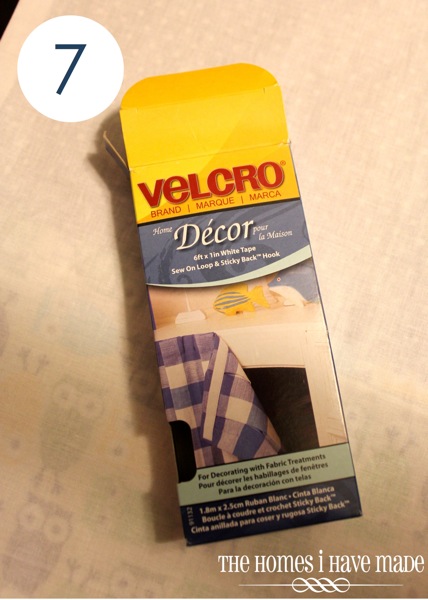 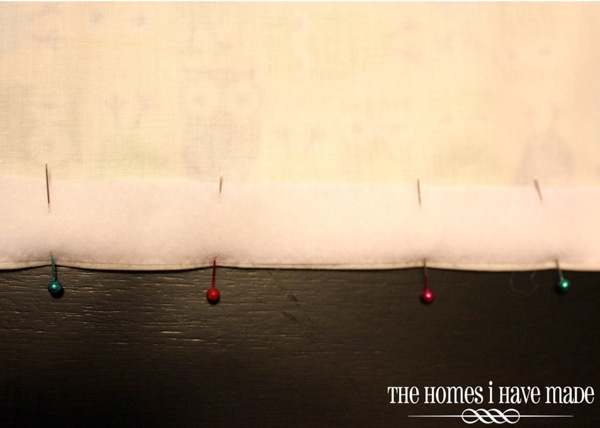 To hang these curtains, we used some curtain rods that I had already used for this exact same purpose! Remember these?

I put up these same curtain rods that were already trimmed in Velcro from my orange valences. 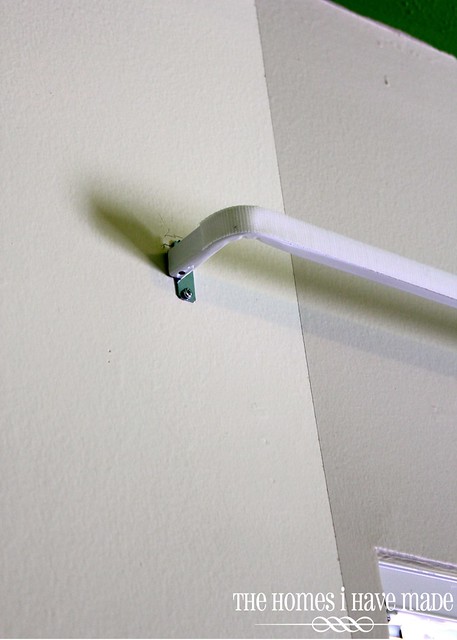 Once the rods were up, all we had to do was stick the valences up! 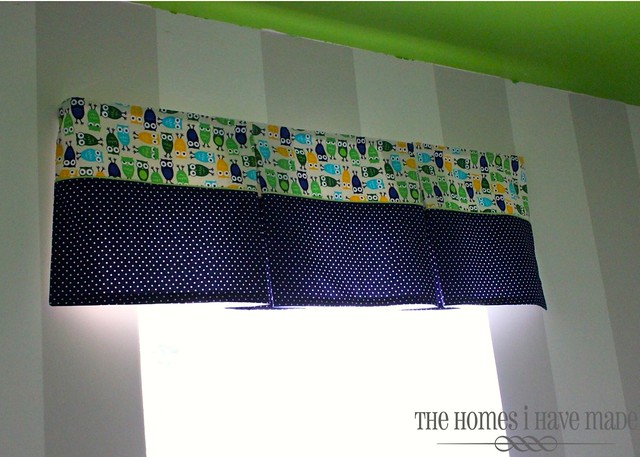 These were such a great way to re-purpose something that was just sitting around Henry’s bedroom. The design of the bumpers completely lent themselves to become valences, and truly, since all the cutting and sewing of the rectangles was done, these came together in very short order! And I just love the tailored and clean look they have while still having a dose of whimsey from the owls! Also, we had everything but the Velcro for this project…we already had all the fabric, the rods and the hardware! I’d say this was a re-purposing success! 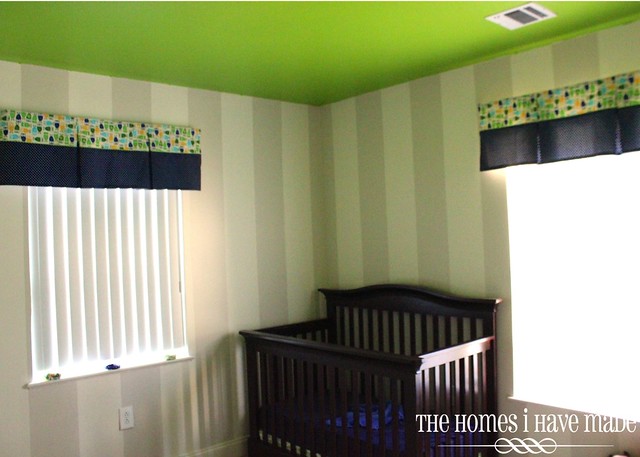 Oh, and remember that crib skirt that got taken off the bed once we lowered the crib mattress? Instead of it sitting in the closet collecting dust, we decided to give it a quick hem. Even though this task was driven more by reducing clutter than putting the skirt back on the crib, I actually think I like the skirt better now! With it hemmed up just a bit and back on the crib, you can finally see all those adorable pleats (that now match the valences!) under the crib boards! And what a subtle difference for the crib on the whole, don’t you think?!? 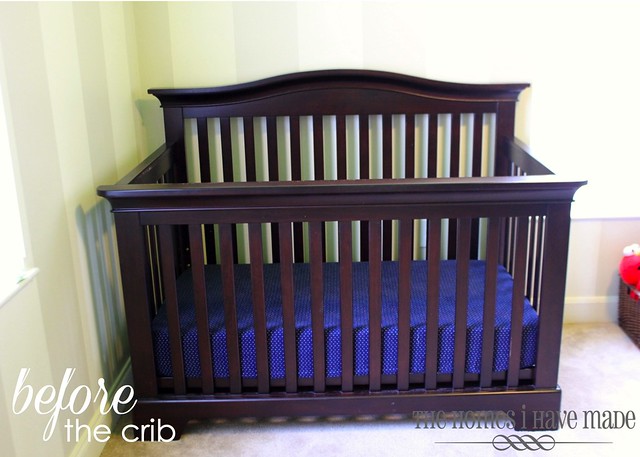 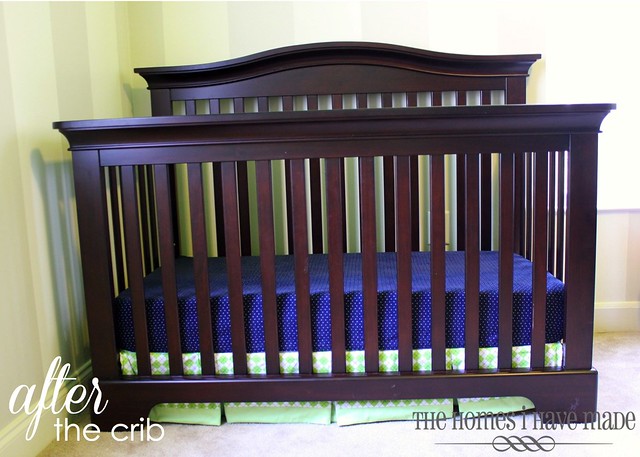 So…two quick This-to-That projects that re-purposed some old decor items, got them off the floor and out of the closet, and got Henry’s room off to a cozy start! 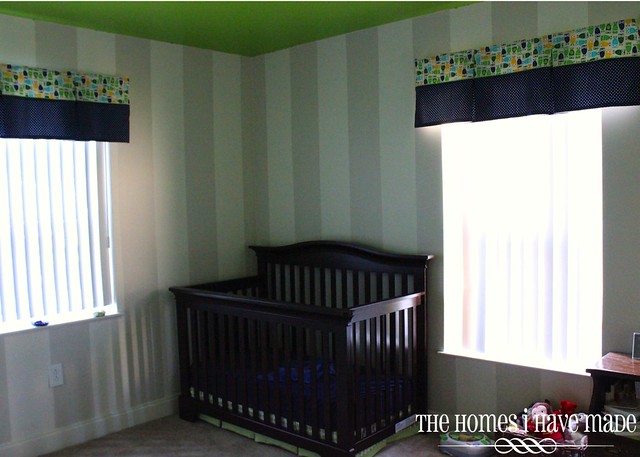 See You Soon!
Megan
« Previous PostShe Dreamt It, He Built It – The Craft Counter
Next Post » A Strong Dose of Pattern

8 Comments on “Quick Updates in the Baby's Room”