Follow me:
Home » Babies & Kids » How We Turned an Awkward Bump Out Into a Reading Nook

How We Turned an Awkward Bump Out Into a Reading Nook

posted by Megan on June 27, 2017 This post may contain affiliate links.

Between Christmas gifts and lots of thoughtful goodies from friends and family when Sam was born, it felt like Henry had a steady stream of presents for a solid 3 months. So when his 6th birthday rolled around last April, Greg and I had a hard time embracing the idea of buying him even more toys. We knew he’d get some goodies from friends and family, so we jumped at the opportunity to gift him something different…something he’d been asking for for a very long time: a play fort! Our upstairs playroom has a very awkward bump out (where the downstairs closet and bathroom are), and we had struggled to come up with a logical (and safe!) way to fill the space. After considering lots of different tent and fort options from numerous retailers, we (somewhat last minute) landed on an easy, off-the-shelf solution that quickly turned into Henry’s favorite spot in the entire house. Read on to see how we turned an awkward bump out into a reading nook (and awesome play fort)! 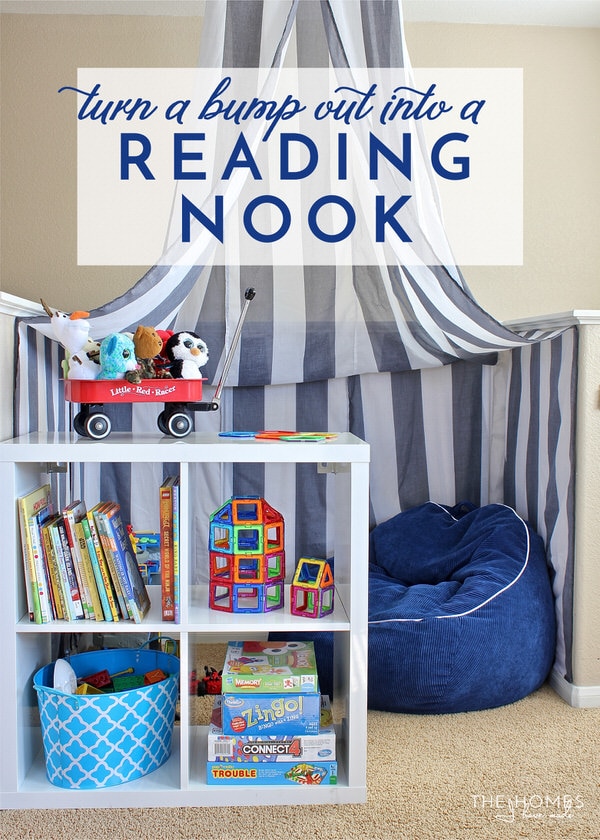 Our upstairs playroom is a pretty decent size, and it also has this very awkward bump out just across from the main play area. For months, we really struggled to come up with something to put in the nook. With no TV hookup, a mini entertainment center was out of the question. And with a two-story drop on the other side of that half wall, we didn’t want to put anything against the wall that kids could climb up on (and therefor make that ledge even easier to reach). 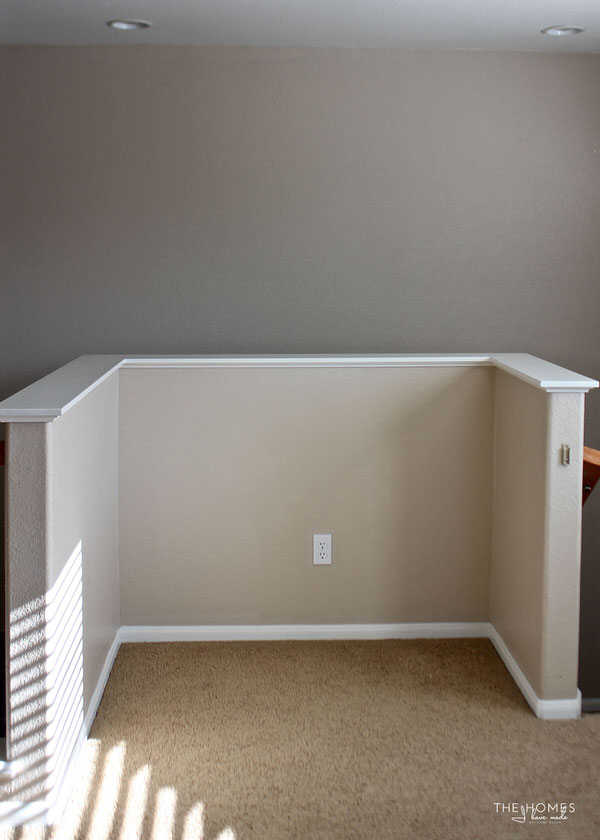 For months, random things floated in and out of the nook, but it was mostly used as extra floor space to play. Then Henry started building forts more and more (all over the house), and expressed a desire for a play tent. I loved the tent idea, but this nook sits right at the top of the stairs; and all the ones we found stuck too far into the walkway between the stairs and the rest of the upstairs. 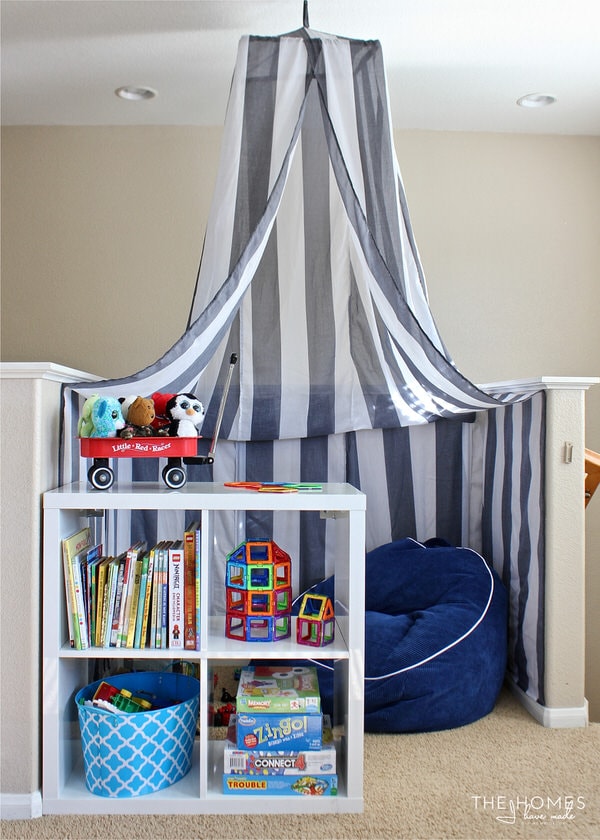 Then a mailer from Target came, and I saw this simple (and super inexpensive) canopy on the cover. I knew it was the perfect solution for transforming this nook into a play fort/reading nook in a way that wouldn’t impede foot traffic or become another “big thing” in the playroom. Combined with a bean bag chair (also from Target) and a 2×2 IKEA Kallax (that we had from our old playroom), we ended up with quite the quaint nook for Henry to read, play, pretend and more! 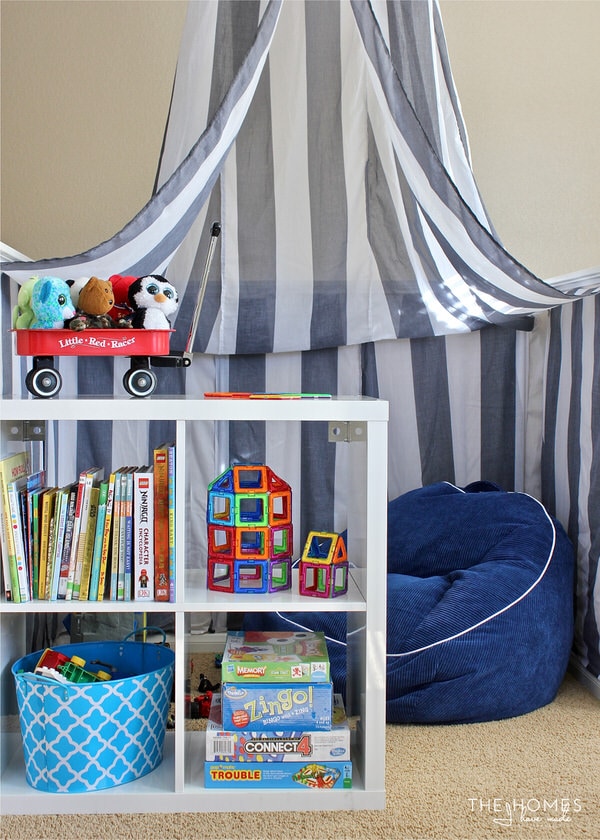 I am not going to give detailed step-by-step instructions for hanging a canopy in a bump out because each and every house/nook will be slightly different (and therefor require a slightly different process). However, here are a few tips to keep in mind if you want to try something similar in your own home:

The night before Henry’s birthday, Greg and I scrambled to setup the fort while he slept in his bedroom just 15 feet away. We eyeballed a spot for the hook, hung the canopy, and then used thumbtacks to secure the sides of the canopy to the nook’s walls. As you can tell from the photo below, eyeballing the hook’s location wasn’t the best idea because once the fabric was secured to the walls, it tilted the top of the canopy in a really unsightly way. 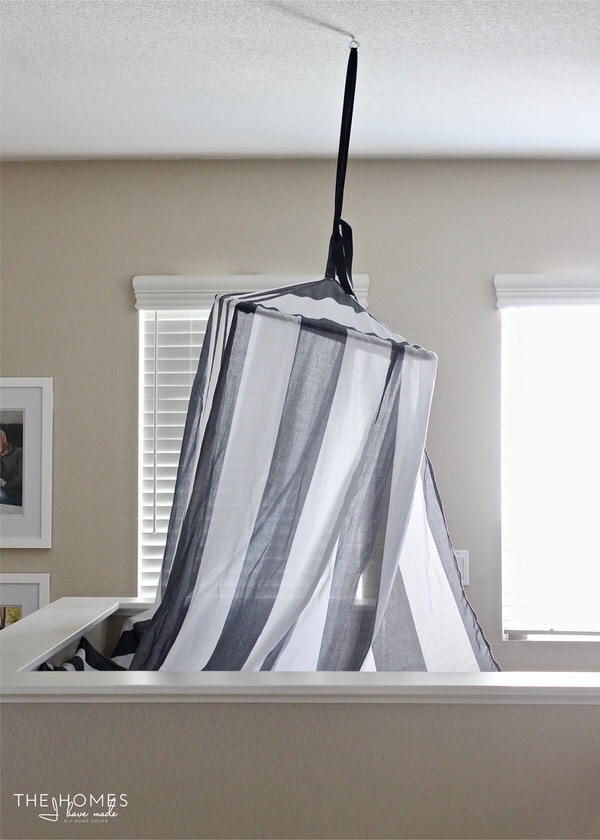 Admittedly, it took us a few months to get around to fixing it, but I’m happy to report our next attempt yielded much better results. Instead of hanging the hook first, have a partner hold up the canopy so you can secure the sides of the canopy to the wall. Then place the hook and hang the canopy where it creates the most straight/level orientation. 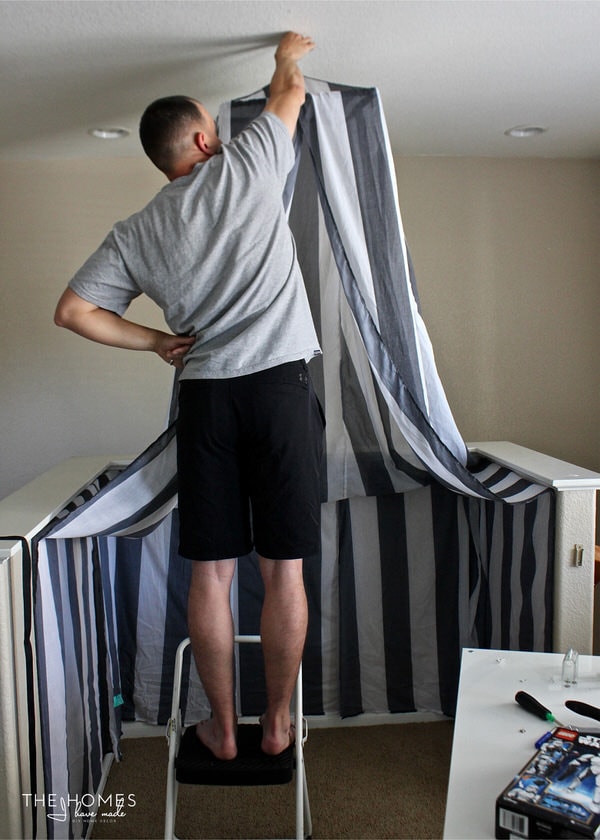 Use a Staple Gun to Secure Fabric to the Walls

As I said, our first idea was to use thumbtacks to secure the sides of the canopy to the walls. Not only did this not give the cleanest appearance, but they were quite easy for the kids to knock out while playing (simply by yanking on the fabric). On our second go around, we used a staple gun to first secure the bottom edge of the fabric to the wall just above the floor trim. We then pulled the fabric taught and secured it with more staples just below the ledge. Not only did this method create a much more uniform appearance, but the whole arrangement is much more secure. 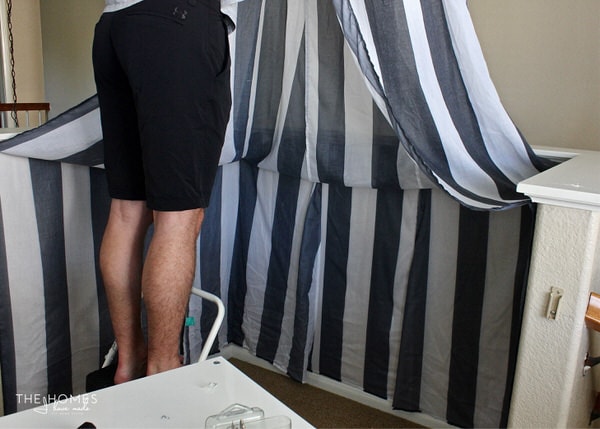 Tuck Excess Fabric Into the Corners

One reason I knew this specific canopy would work in our nook was because it had SO much fabric to work with. It might be hard to tell, but the left side wall protrudes further forward than the right side. Additionally, the entire nook size was much smaller than the canopy could accommodate. To give the canopy a nice, clean appearance and make it look perfectly sized for our nook, all the excess fabric is tucked into the corners and stapled into place. The stripes on the fabric certainly helped keep everything vertical, but essentially just keep tucking and stapling until you get a nice, clean, flat expanse of fabric across your entire nook! 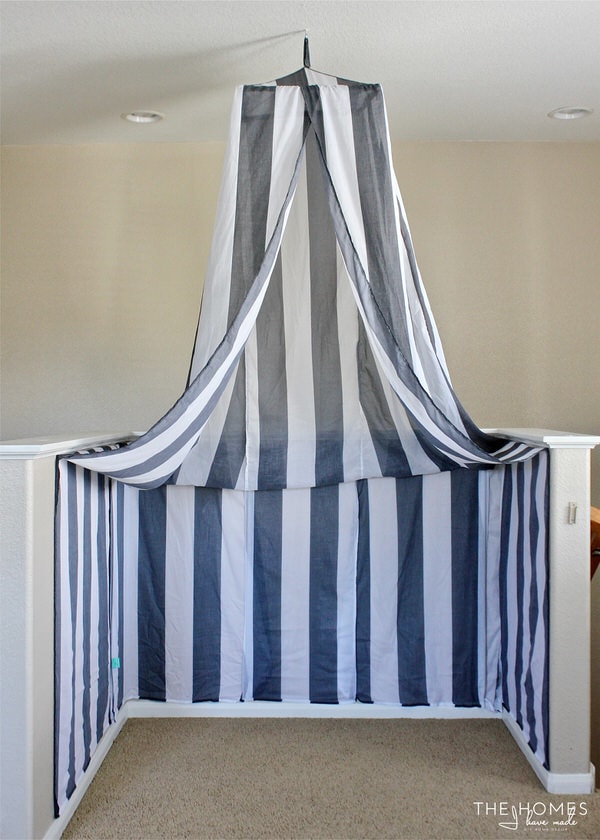 Once all the sides were stapled into place just as we wanted, then we placed the hook and hung the canopy by the included loop! 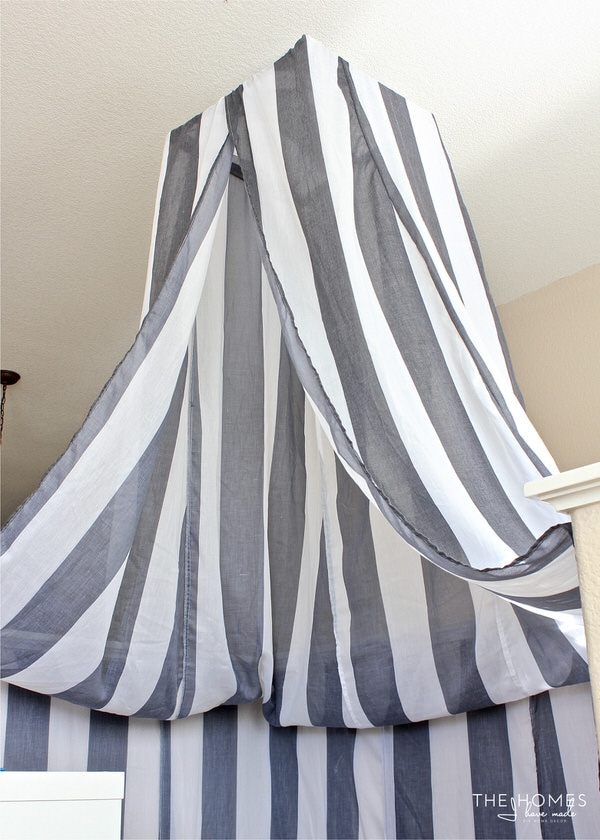 Let the Kids Have a Say

I have to admit that when I get an idea in my head, I execute it exactly as I envision it and am not always open to other options or ideas. This certainly is a weakness of mine; and it frequently becomes an issue since I live with some pretty smart and creative boys who have good ideas of their own. Let me explain.

My original plan was to setup the nook like this: 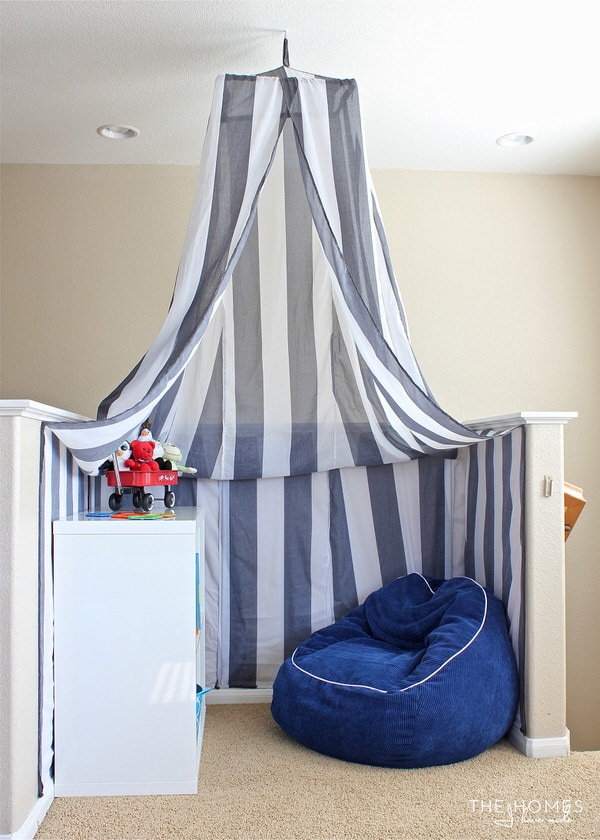 Bean bag on one side, little shelf on the other for Henry’s toys and games…all of it in a nice, tidy little spot. 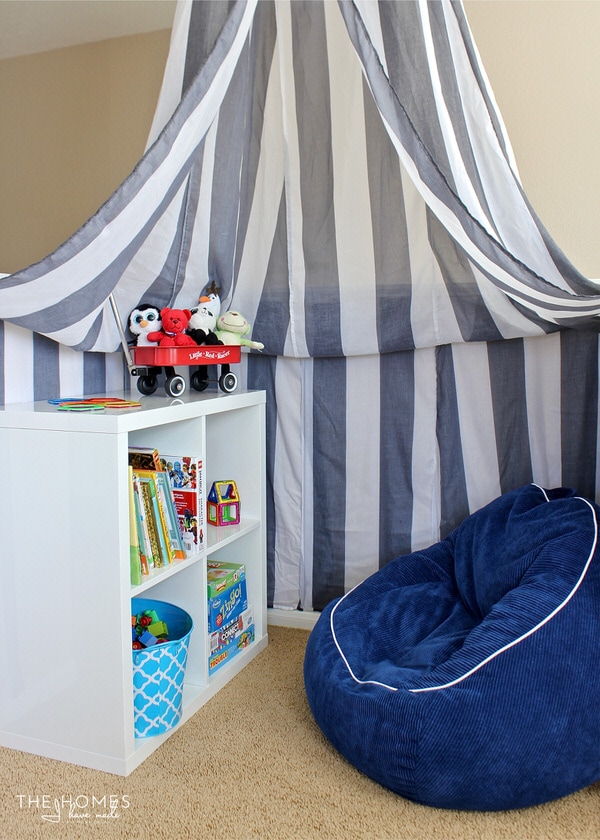 And for a while, Henry loved it. He called it his “office,” and it became our favorite spot for reading bedtime stories. 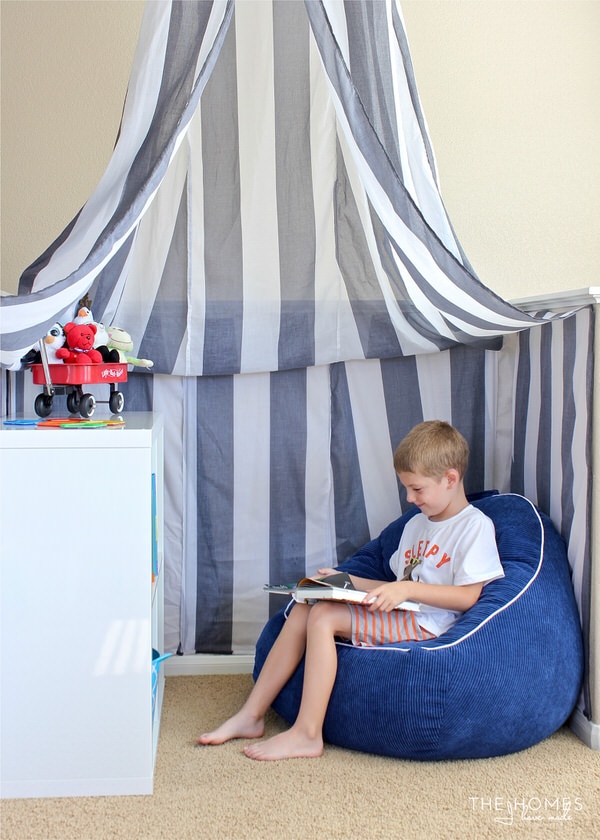 But when I had everything pulled apart to fix the hook issue, Henry piped up that he wanted the shelf to go the “other way.” I was confused, so he showed me what he wanted: 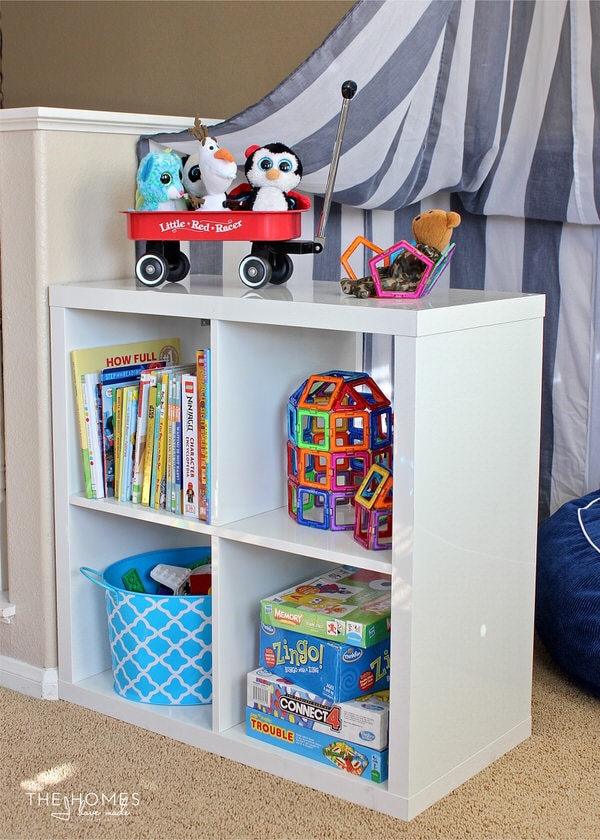 By turning the shelf 90 degrees, it created a wall, transforming the reading nook into a little house or “fort.” Although it wasn’t my first choice or instinct…it made Henry infinitely more excited about this space because now there was room to play inside the fort… 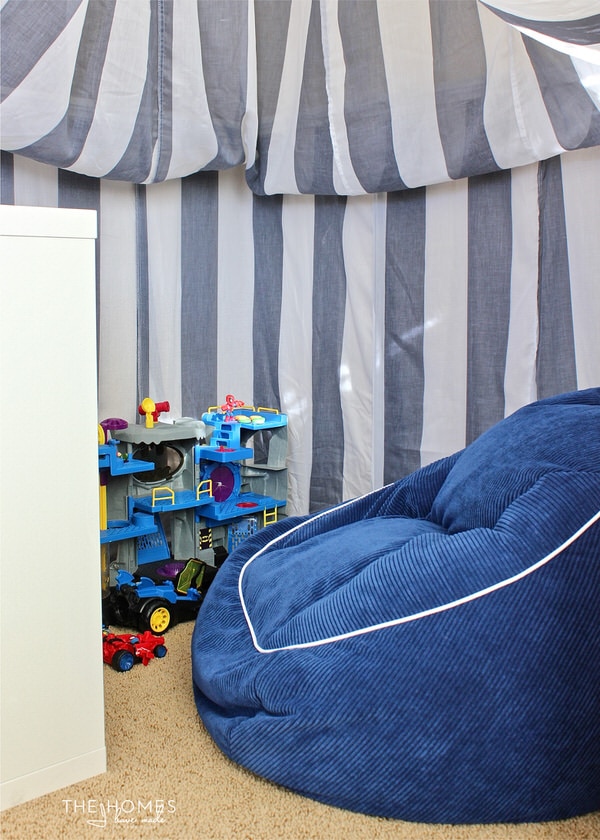 He pretends the shelves are his windows and loves being tucked in there with random toys, books, blankets and pets. 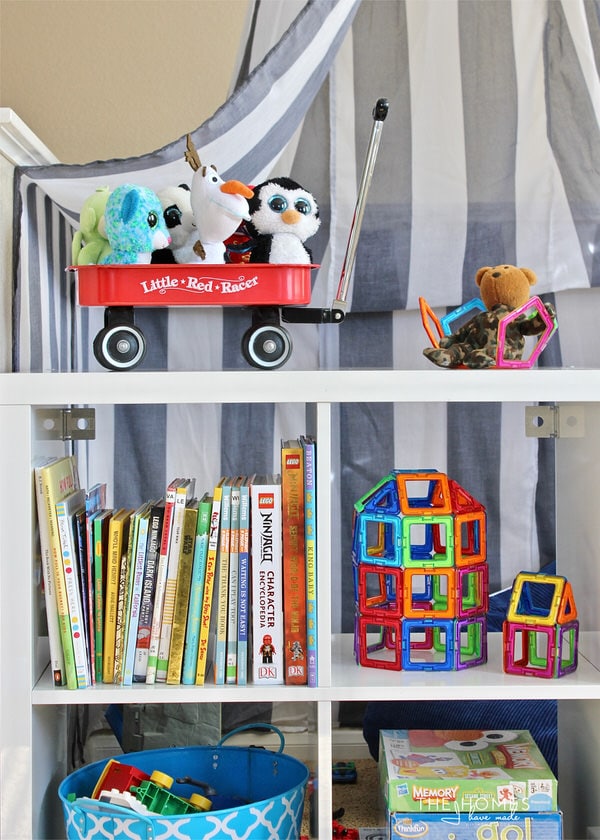 With the shelf oriented this way…the bean bag can be in for reading or out for playtime. He can drag toys in and out through the “door” or pass things through the shelves when he’s playing restaurant or store. And if he wants to watch a movie from inside his fort, it’s easy enough to rotate the shelf back against the wall to give him a clear view of the TV. Although it wasn’t my first instinct, my little man sure had a great idea! 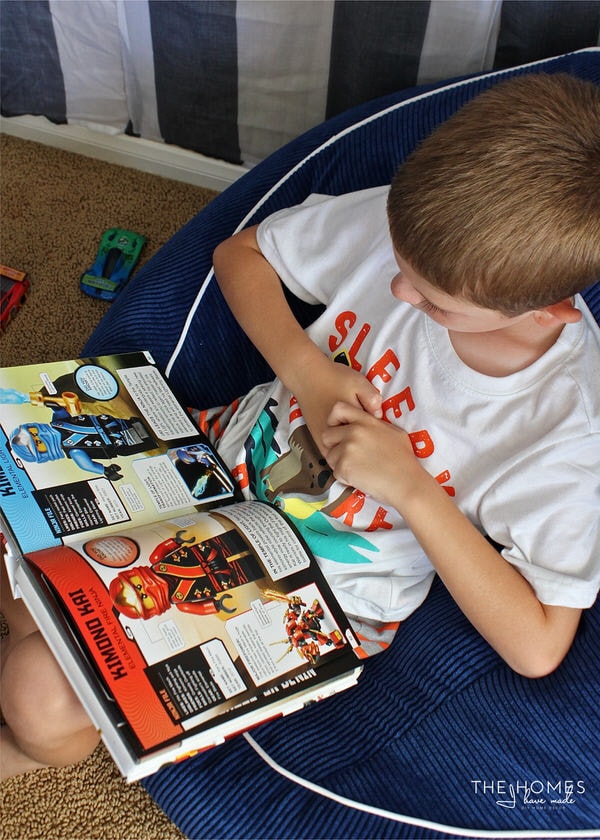 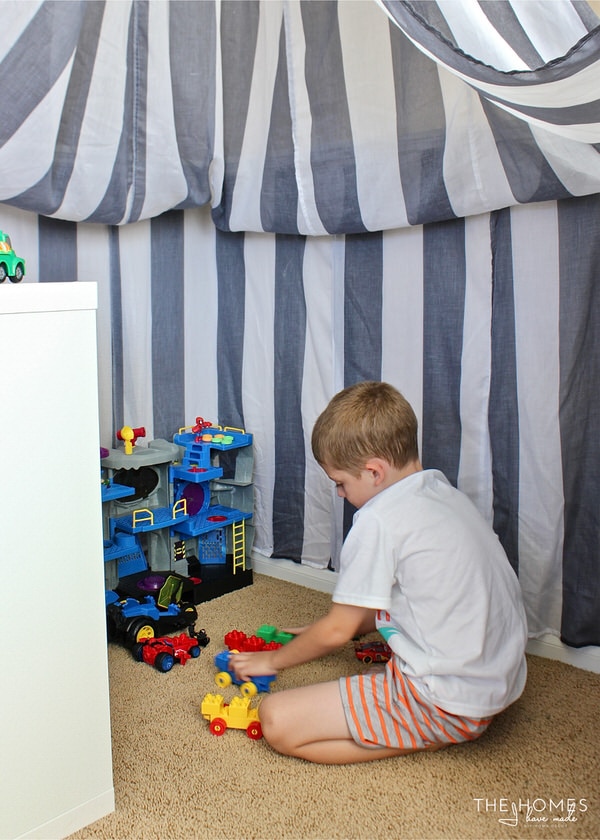 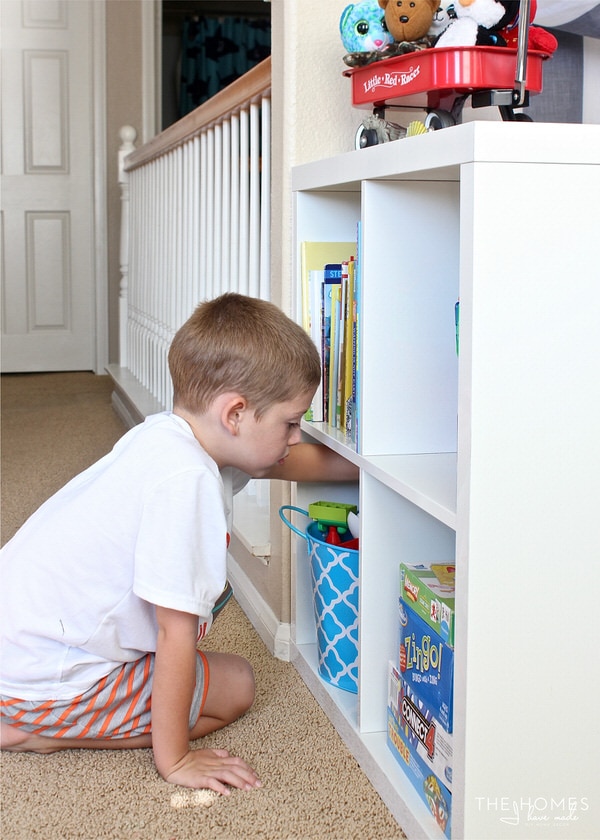 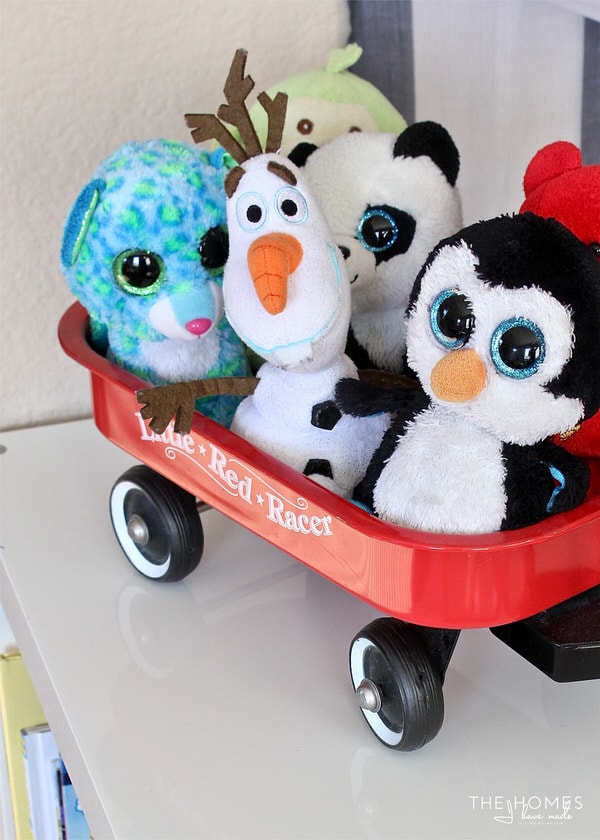 And I had to share this other cute idea, courtesy of Henry. He made his “Marine Bear” a bean bag just like his! 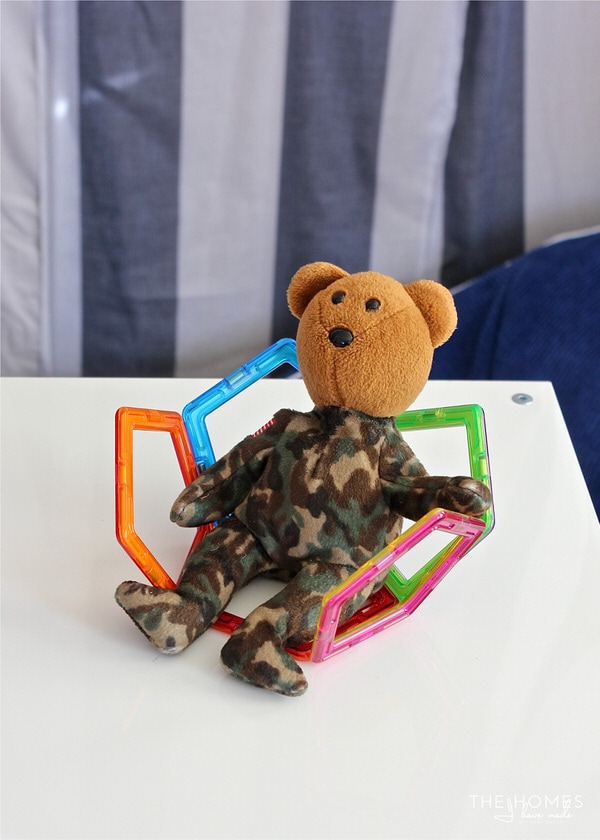 Admittedly, I styled the shelves for these pictures. But I have to say, it’s amazing what re-arranging toys can do. Simply by moving the same toys to different shelves throughout his playroom, Henry has been playing with them so much more. After the photo shoot, I asked him if he wanted me to put everything back where it was and he said no “I like it like this,” and played with these toys for a few days straight! 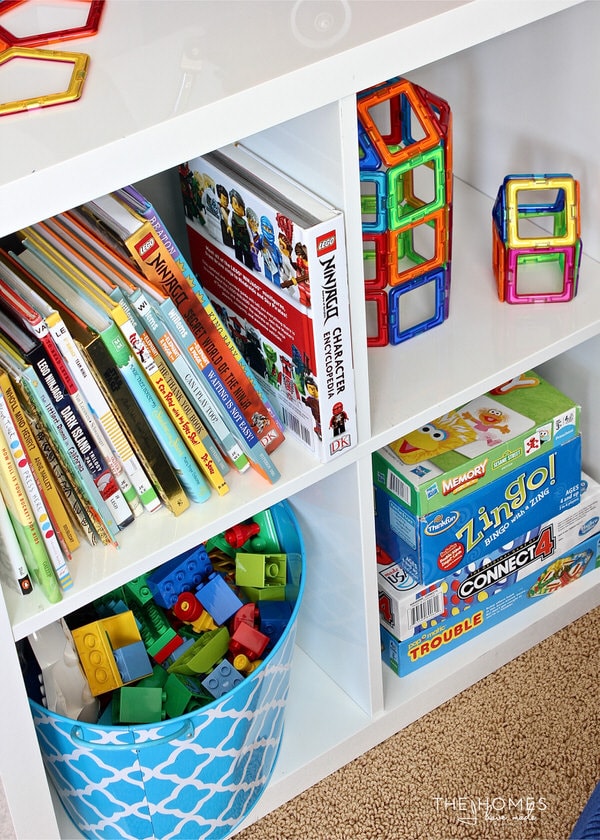 This shelf arrangement (as well as what’s on them!) will have to evolve once Sam becomes more mobile. For now, I am so excited we were able to give Henry the play spot he was long pining for in a way that made perfect sense for our house’s layout. 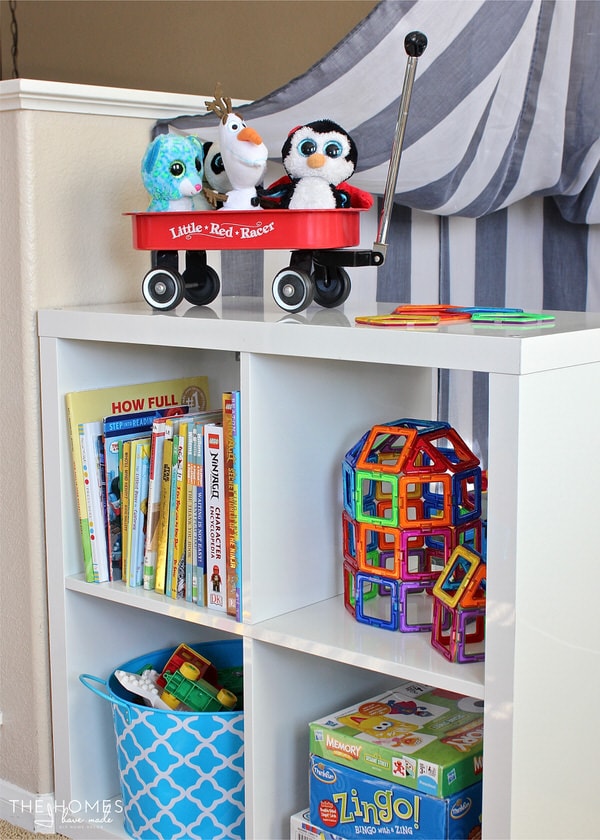 Even though it took us months to figure out what to fit in this spot, I’m so glad we waited and let it evolve naturally. Henry adores his fort, which means he spends a lot more time in his playroom than before. The arrangement cost us less than $100 and 30 minutes of time (although done twice!); and it’s perfectly temporary and flexible, which means it can be adapted to other homes as necessary. Creating a play fort in this nook was not my first instinct; but now that it’s done, I think it’s the cutest and most functional thing we could have done! 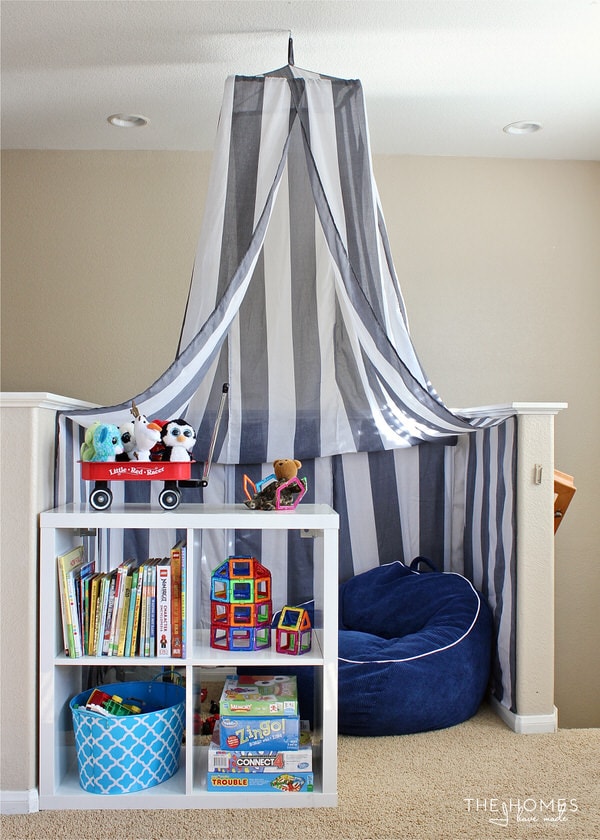 Do you have any awkward nooks or bump outs in your home? What do you use them for? Do your kids love forts as much as Henry? Do you have a “permanent” fort or rely on couch cushions and pillows for ad hoc play? I’d love to hear your solutions in the comments! 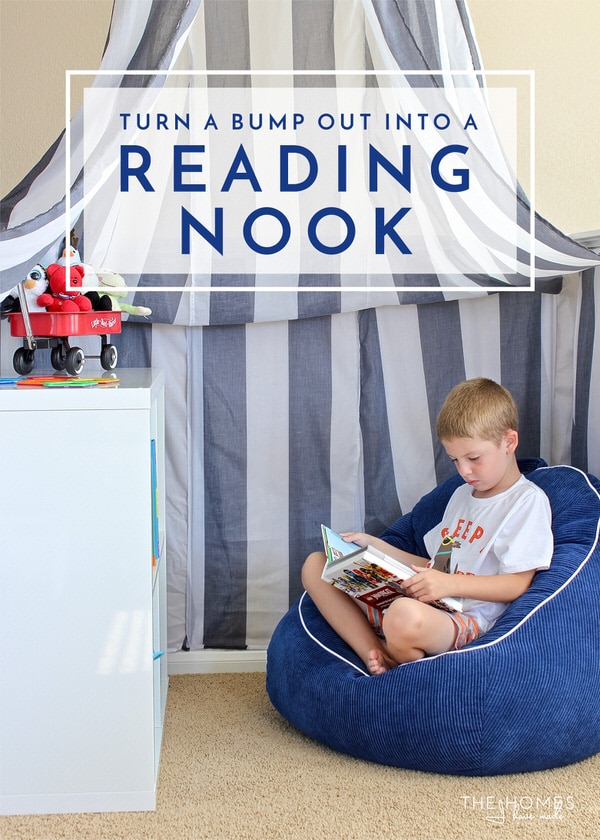 I know house updates have been slow coming, but figuring out this house for our needs and our style has been one of my biggest challenges yet. Back here on Friday, I’ll be marking our first year in this house (already!?!?!). I’ll recap what I’ve accomplished so far, and what I’m doing to help me love it more. See you then!

See You Soon!
Megan
« Previous PostThe Tiny Tote That Is Saving My Summer Sanity!
Next Post » Changing the Tire | Marking 1 Year in Our 7th Home