posted by Megan on September 30, 2011 This post may contain affiliate links.
Inspiration.  We had two bathrooms, which meant that my husband had his bathroom and I had mine!  I bought this shower curtain ages ago from IKEA, and kept it for years simply because I loved the combination of colors.  This curtain set the tone for the whole bathroom.

Toiletry Cart.  There was very little space in this bathroom, and there were no drawers or storage space.  I found this rolling 4-drawer cart, unfinished, at a Japanese home store.  I removed the drawers and painted the entire frame white.  I then scoured the internet for coordinating scrapbook paper and found 6 patterns that all coordinated and matched my shower curtain.  Using Modge Podge, I decoupaged the sides and fronts of all four drawers.  The front all featured the paisley paper; 2 drawers had striped sides; and 2 drawers had polka dot sides.  Lesson Learned:  this project looked incredible, but sliding the drawers in and out proved difficult once decoupaged with thick scrapbook paper.  If I were to do something similar again, I would use paper-thin scrapbook paper (rather than cardstock weight) and not use the decoupaging medium or finishing varnish on the inside of the drawers. 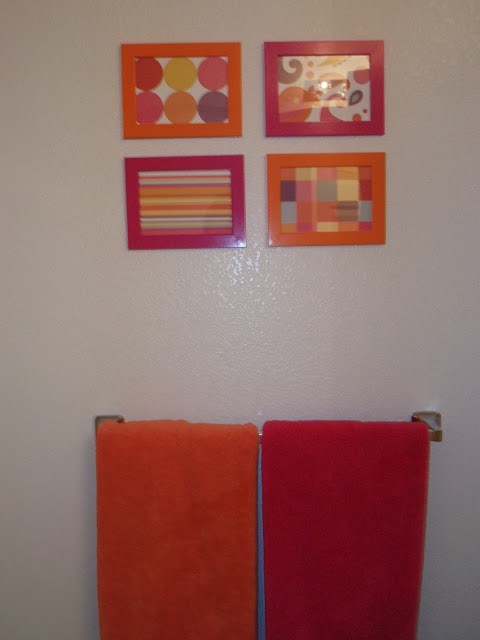 Art.  I then used the same scrapbook paper in simple, brightly-colored IKEA frames as the artwork above the towel rack. 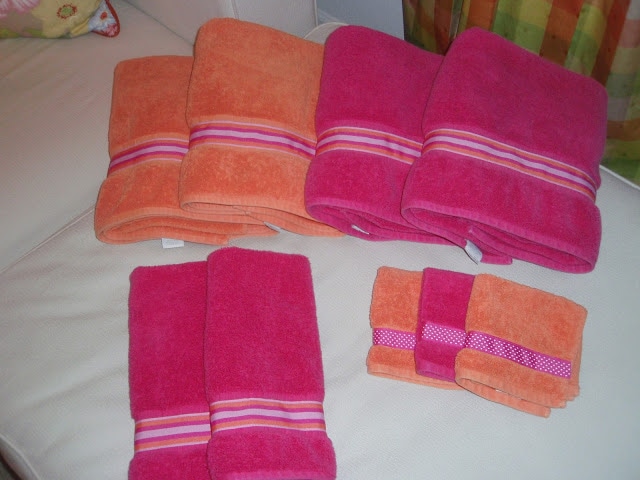 Towels.  To add some flair to the pink and orange towles, I trimmed them all with the same pink and orange ribbon.  The wash cloths were trimmed with a smaller coordinating pink polka dot ribbon.  Adding these ribbons to the “ditch” that already existed on the towels was simple; and to my pleasant surprise: they wash beautifully!
See You Soon!
Megan
« Previous PostOkinawa – Master Bedroom
Next Post » Okinawa – Greg’s “Lounge”