posted by Megan on May 19, 2014 This post may contain affiliate links.

Hmmmm, that’s probably the strangest title for a post, ever!!! LOL.

On Friday, I showed you the latest furniture transformation to come into our house: a bright green color-blocked credenza for Henry’s big-boy room!  (On a side note, it made me so happy that so many of you connected the credenza to Henry’s quilt without me even linking to it!! You all really are paying attention 😉 Anyway, I wanted to keep the styling on the top of the credenza simple and practical – it is a three-year-old’s room after all! I know his mini board books would take up most of the space, but I really wanted a big chunky accessory to balance everything out.  I mentioned last week that I found this big wooden elephant on clearance at HomeGoods for $16. Henry and I both took to her right away, so there wasn’t any hesitation that she was coming home with us. At first, I thought I’d paint her just like the bookends and the rhino. But her wood tone was nice and rich and pretty, AND it matched other wood pieces in the room. However, I really wanted to do something fun to it to give it a more youthful and whimsical feel. 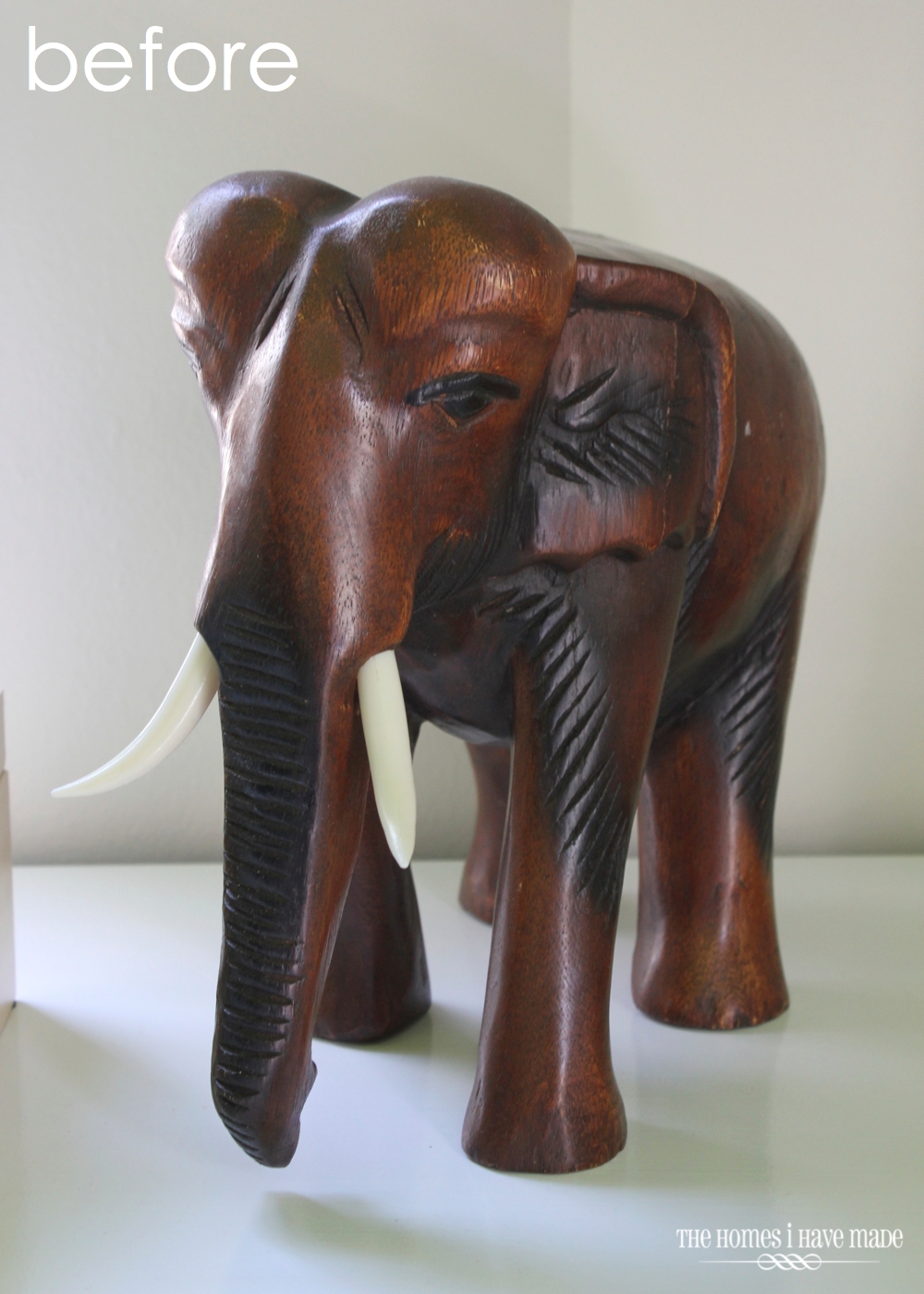 So I dipped her feet and husks! Why not, right? Now Henry likes to say that Ms. Phanny has orange shoes on 🙂 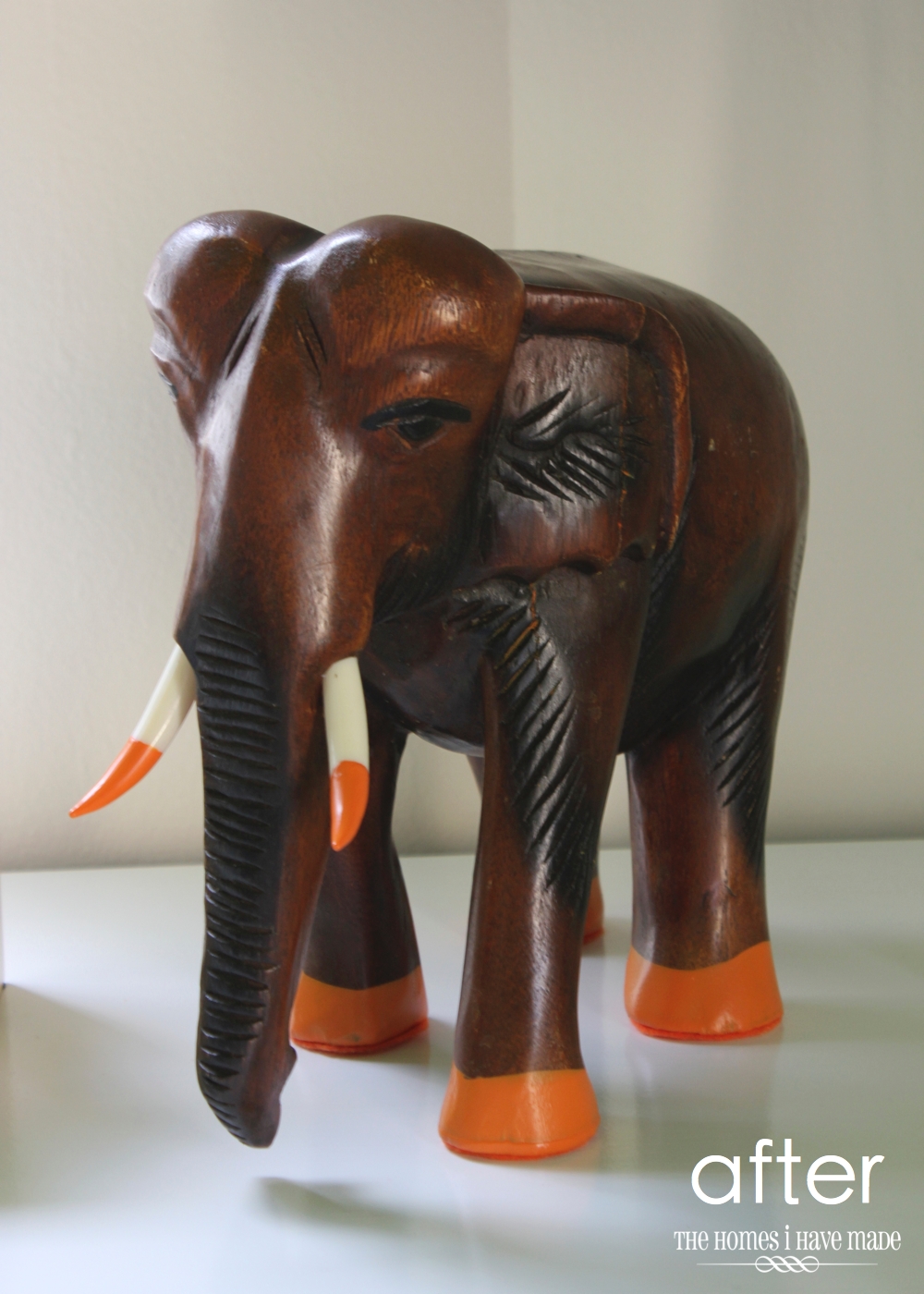 I really hemmed and hawed about how to do this. I could tape off her feet and paint them with a brush to get nice clean lines, which would give a really modern effect. But I really wanted it to look like she went walking through paint. For probably the first time ever, I wanted it to look messy and random, so I decided to actually dip her feet!

I started with a cardboard coffee cup and cut it down so it was about 1.5″ tall. Make sure you pick a cup more than big enough to fit the feet of your item to be dipped. Then I dumped my orange Martha Stewart paint into the cup, only to find the MS paint is suuuuuuuper thick and wouldn’t coat the feet the way I wanted it to. To make it thinner, I mixed in a liberal amount of Polycrylic, and it worked like a charm! Next, working carefully and over A LOT of wax paper, I dipped each of the elephant’s feet, letting the paint go wherever it went. The paint was verrrrry runny, so if I had turned her upside-down right away, it would have run down her legs, which actually could also look pretty cool if that’s what you’re going for. I was pretty happy with my “shoe” effect, so I let her dry for about an hour or so standing upright on wax paper to let the paint+poly set. I also dipped her tusks in the paint and stuck them into some styrofoam to dry. After an hour or so, I flipped Ms. Phanny on her back and let her feet dry over night. By morning, everything was nice and dry and firm. 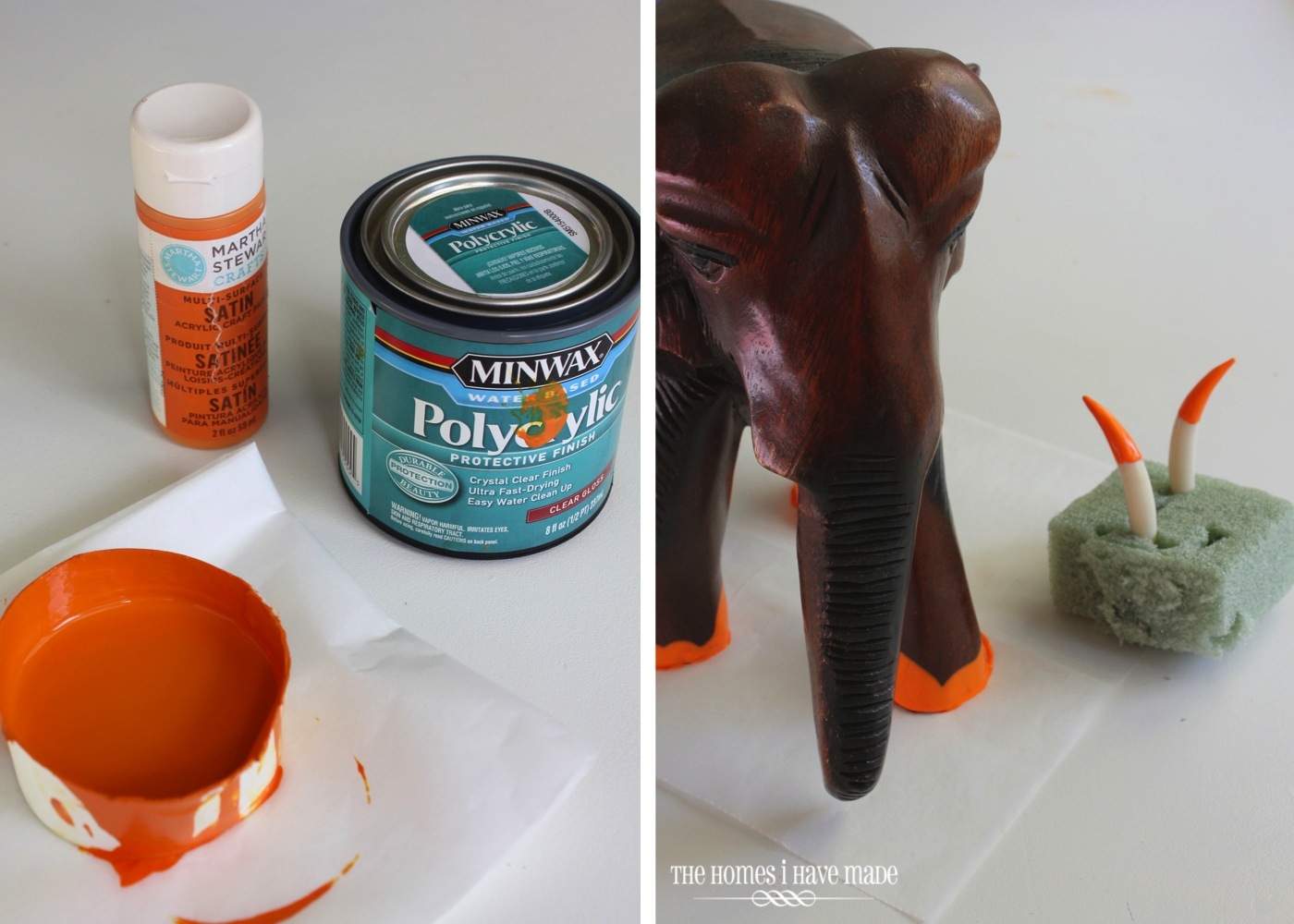 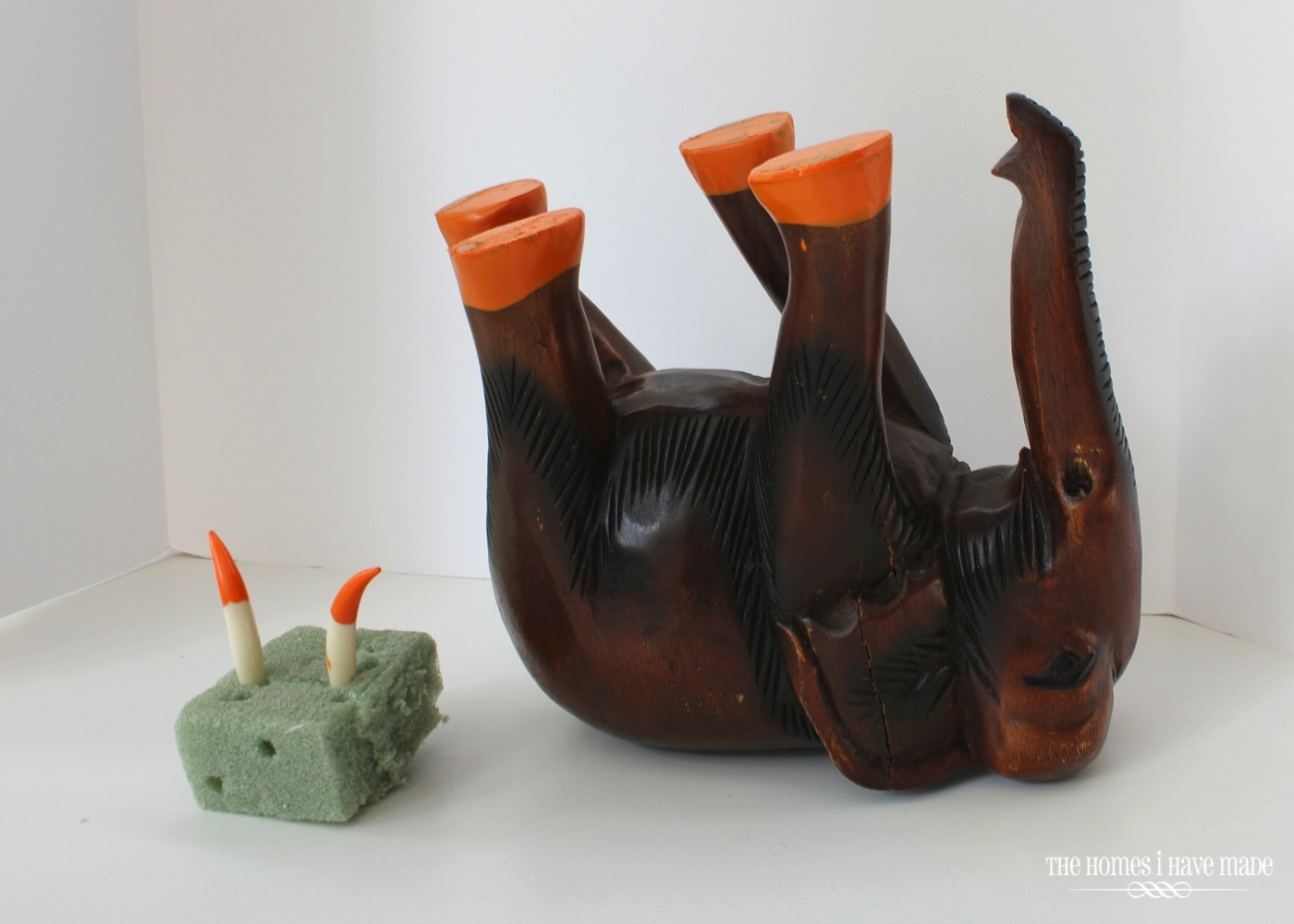 I didn’t want to put newly painted orange feet right onto my bright white credenza stop, so I decided to put little orange felt pads on the bottom of each foot. I simple traced each foot onto felt with a pencil, cut them out, and attached them with hot glue. Her tusks were also hot glued back into place. Back up right, you can hardly tell the felt is there at all! 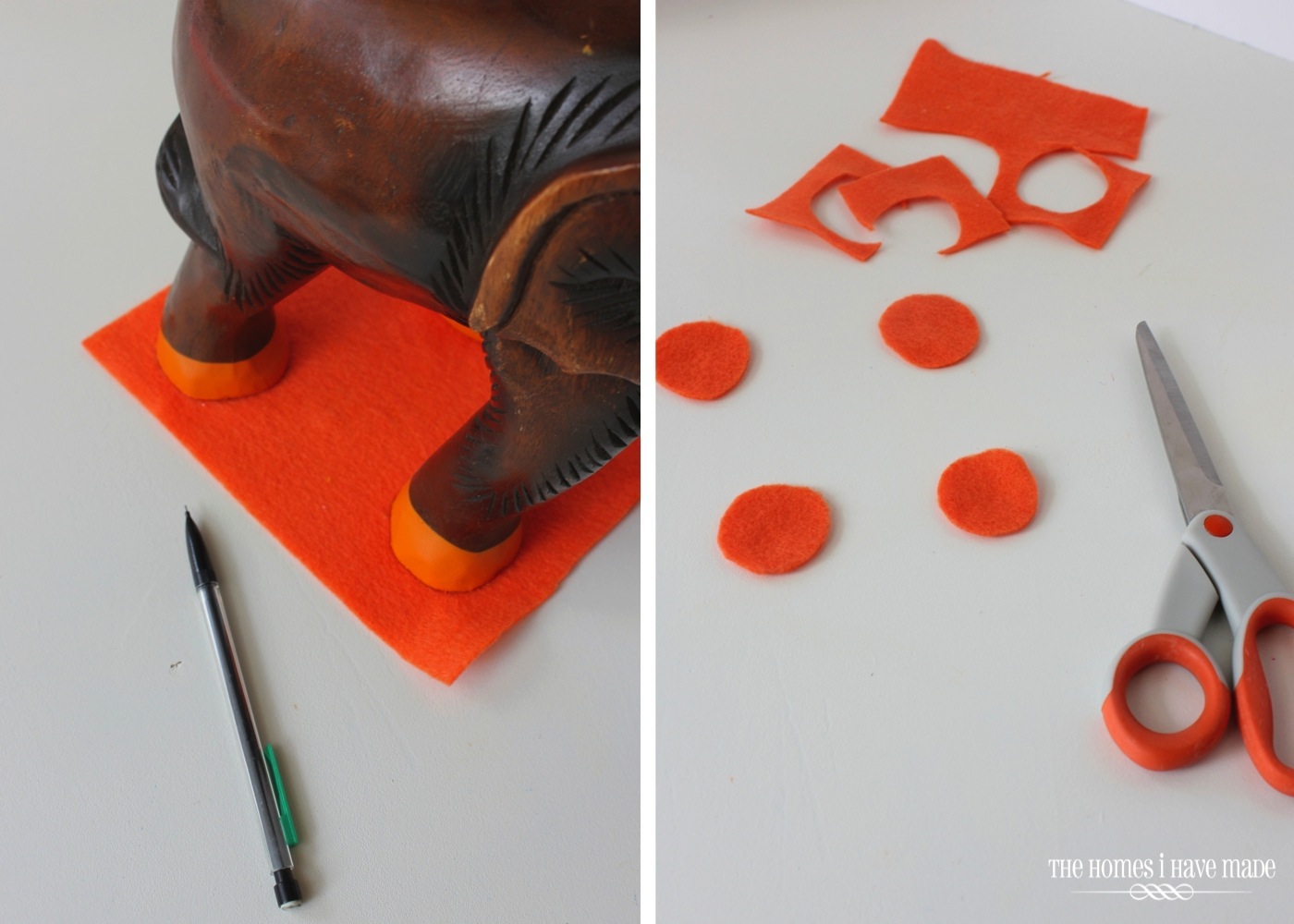 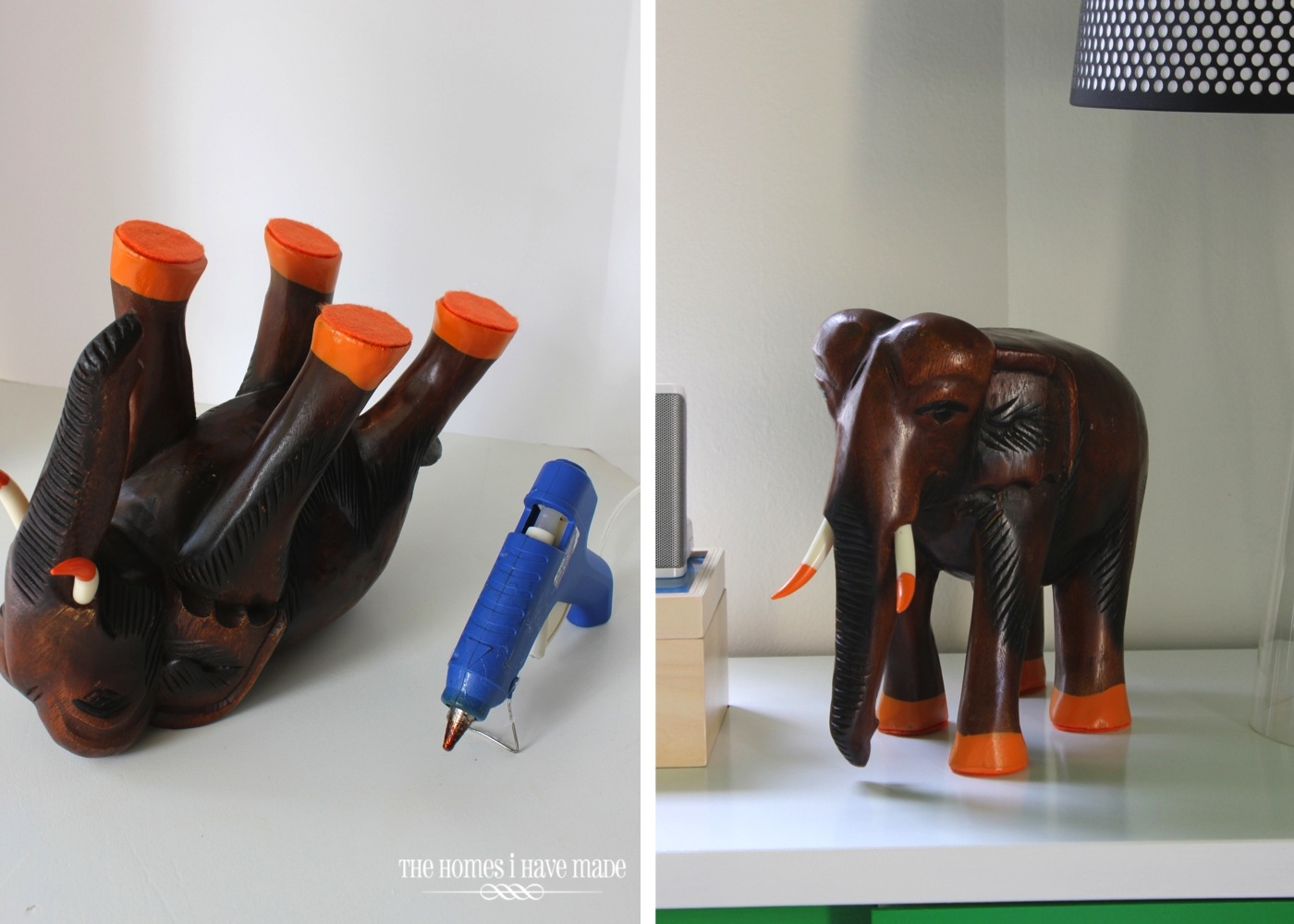 I’m really happy with my decision to just dip Ms. Phanny’s feet. A big orange elephant would have been a bit much here, but now she is whimsical enough to go with the other wild animal touches in the room! 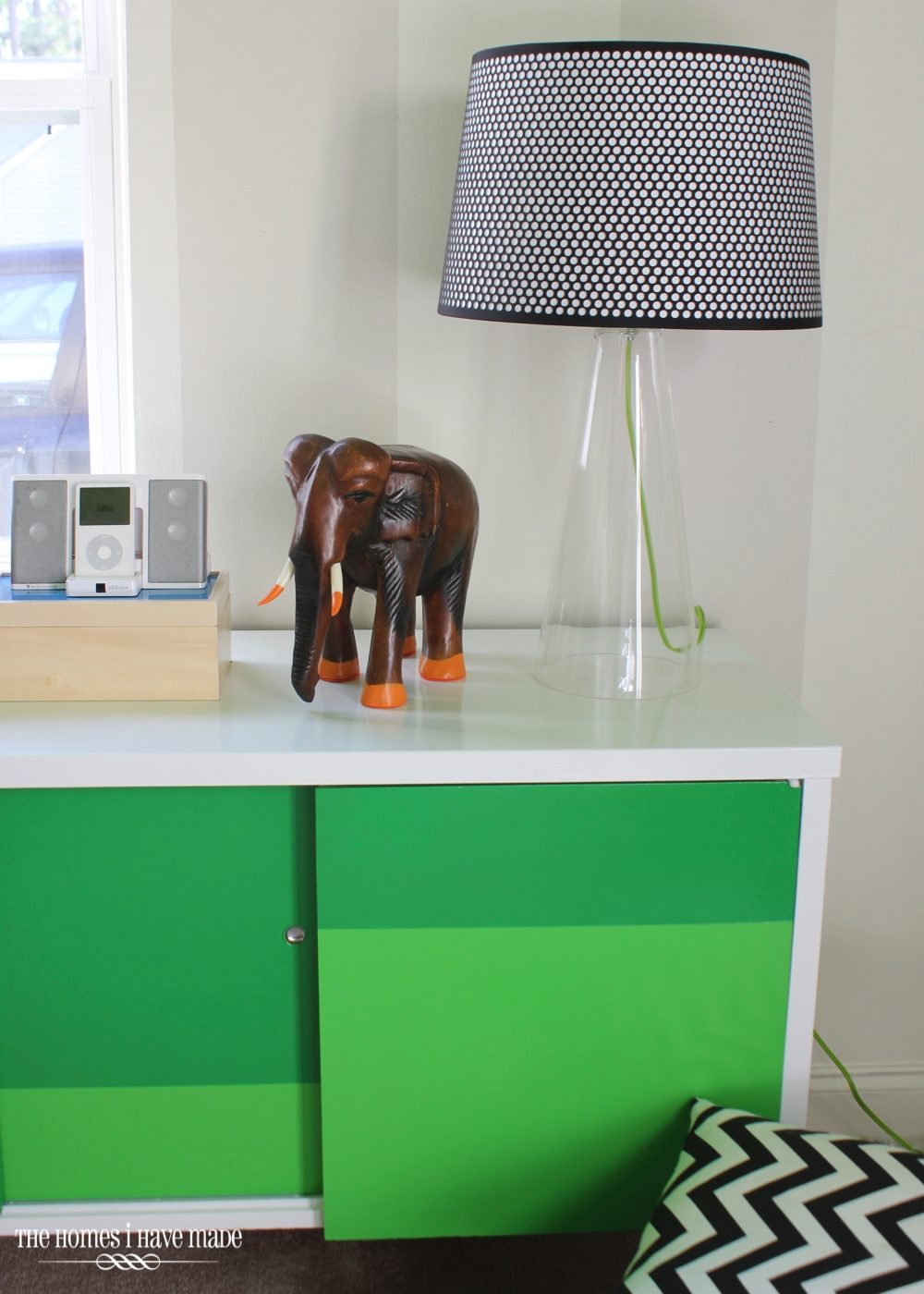 This was my first time actually dipping something (rather than taping off lines and painting a “dipped” look). It was pretty messy, but I really do like the unpredictable nature of the final effect! 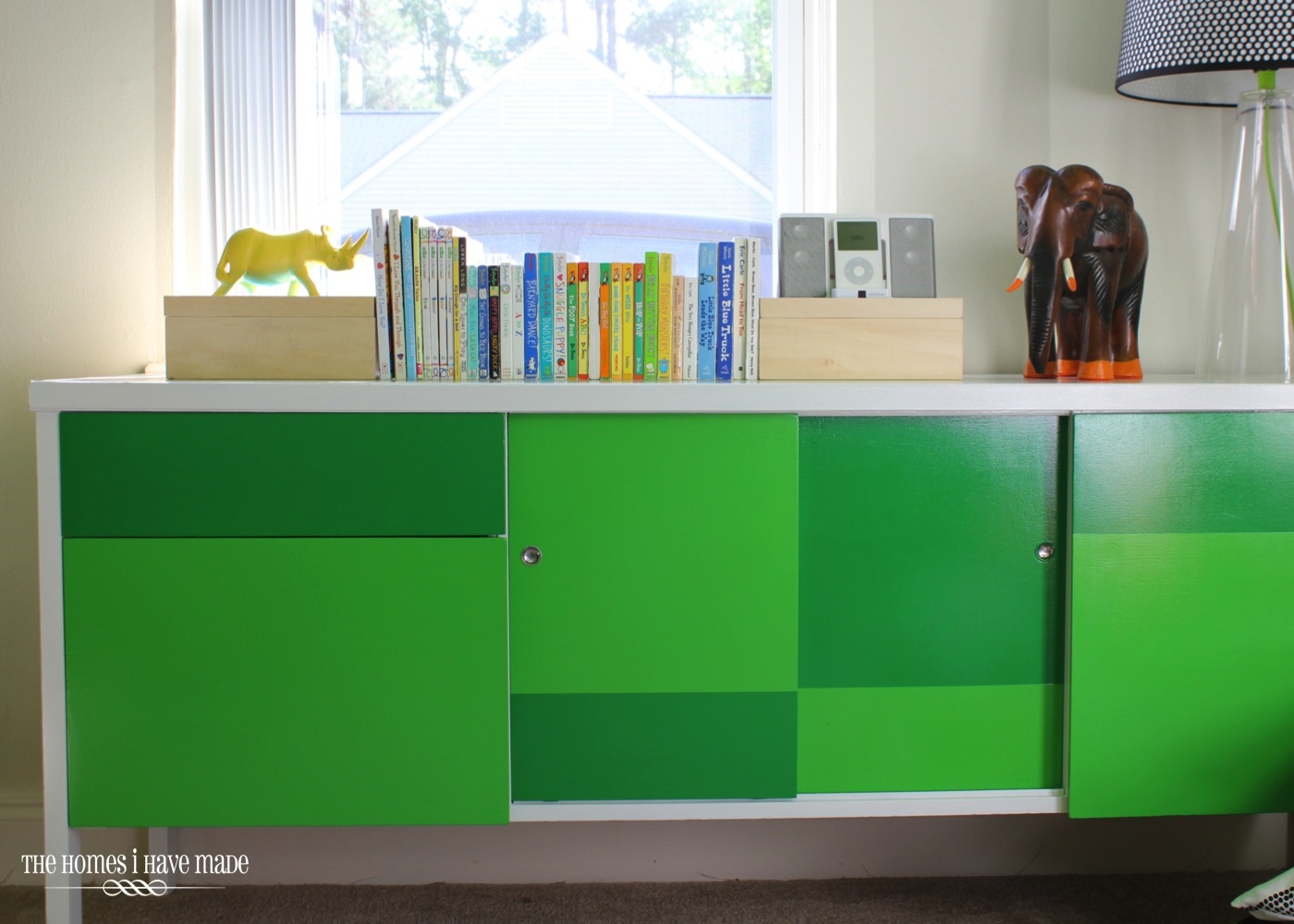 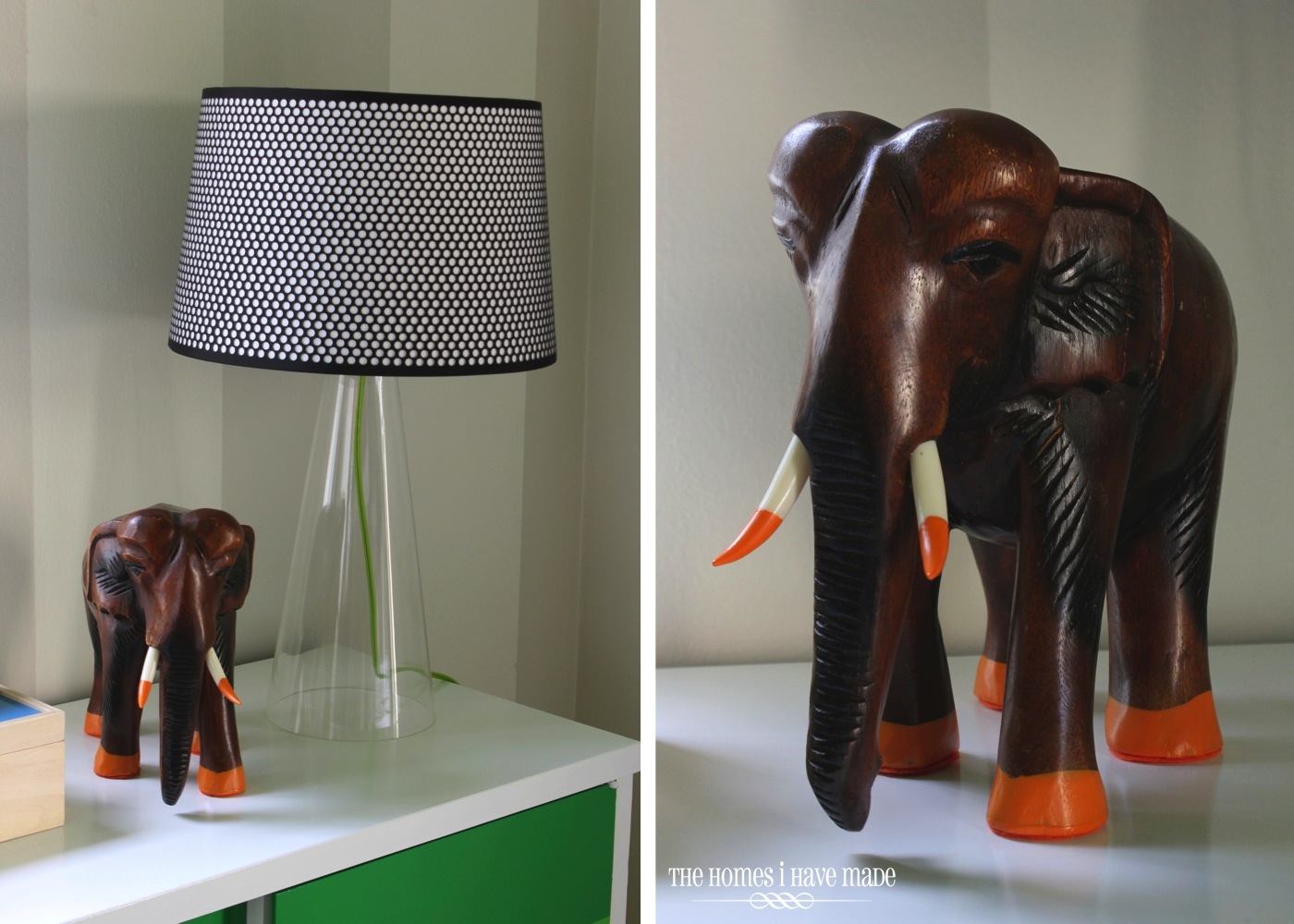 Have you tried the dipping technique? I’ve seen it on furniture and vases, but this is the first time I’ve seen it done on a wooden animal.  It’s a fun way to add a pop of color without a huge commitment. Give it a try on something around your house! 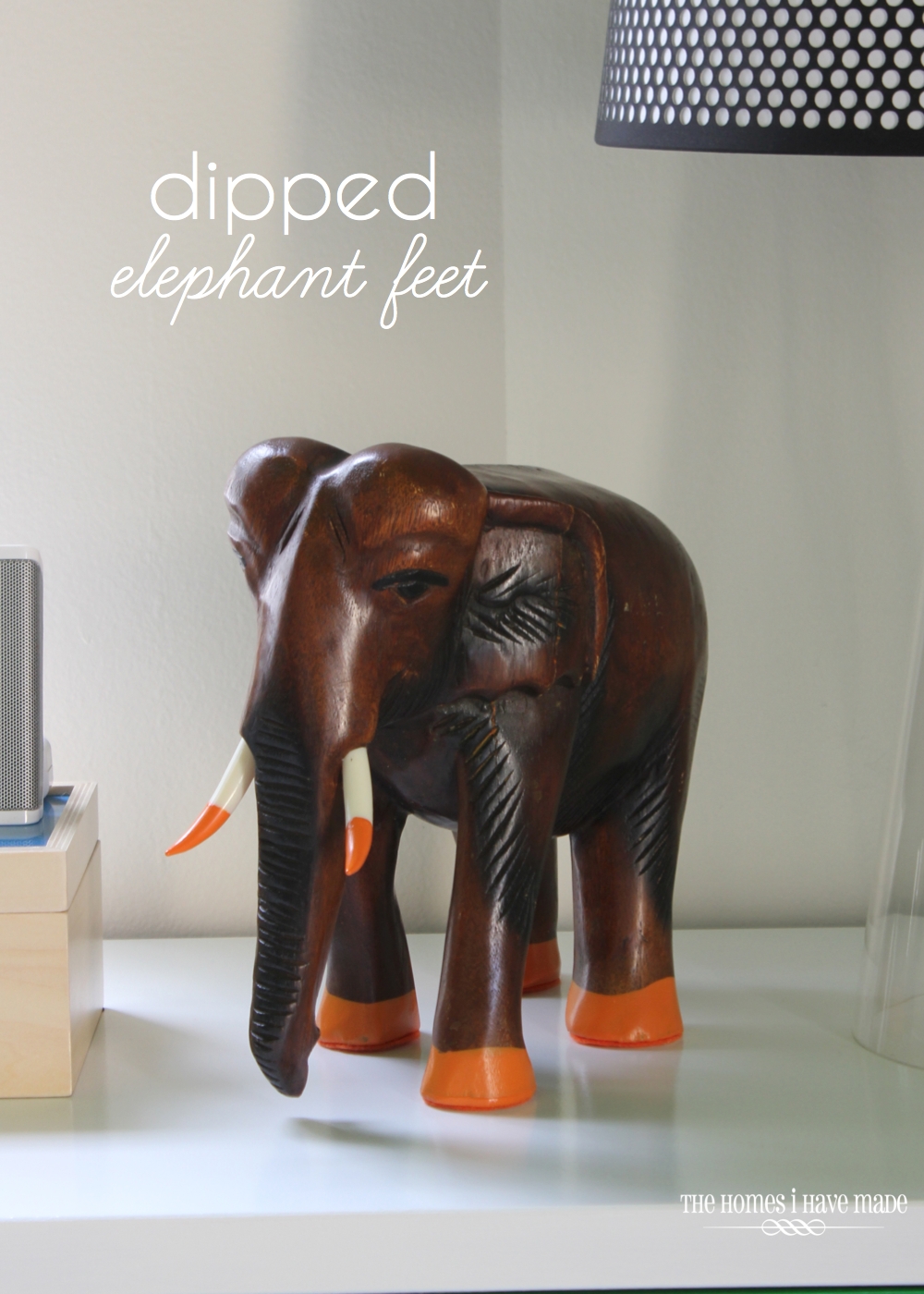 I am spending the week putting the final touches on Henry’s big boy space. I can’t wait to show you a few more surprises I have up my sleeve!