posted by Megan on July 21, 2020 This post may contain affiliate links.

Years ago, I bought some inexpensive pom pom makers because I wanted to try my hand at making my own fluffy garlands. I actually never got around to that project (time to put it back on the To Do List!); but in recent months, I found myself reaching for small, mindless crafts I can do while watching some um…great…kid movies during our Friday movie nights (note the heavy sarcasm 😆). Little did I know that making DIY pom poms wouldn’t just keep my hands busy but would actually become a highly addicting new hobby. Then when I kept seeing this JoAnn Fabrics ad swing through my Instagram feed, I instantly knew how to put all my fluffy poms to good use! Let me show you how to add pom poms to a pillow to bring more texture, style, and color to any space! 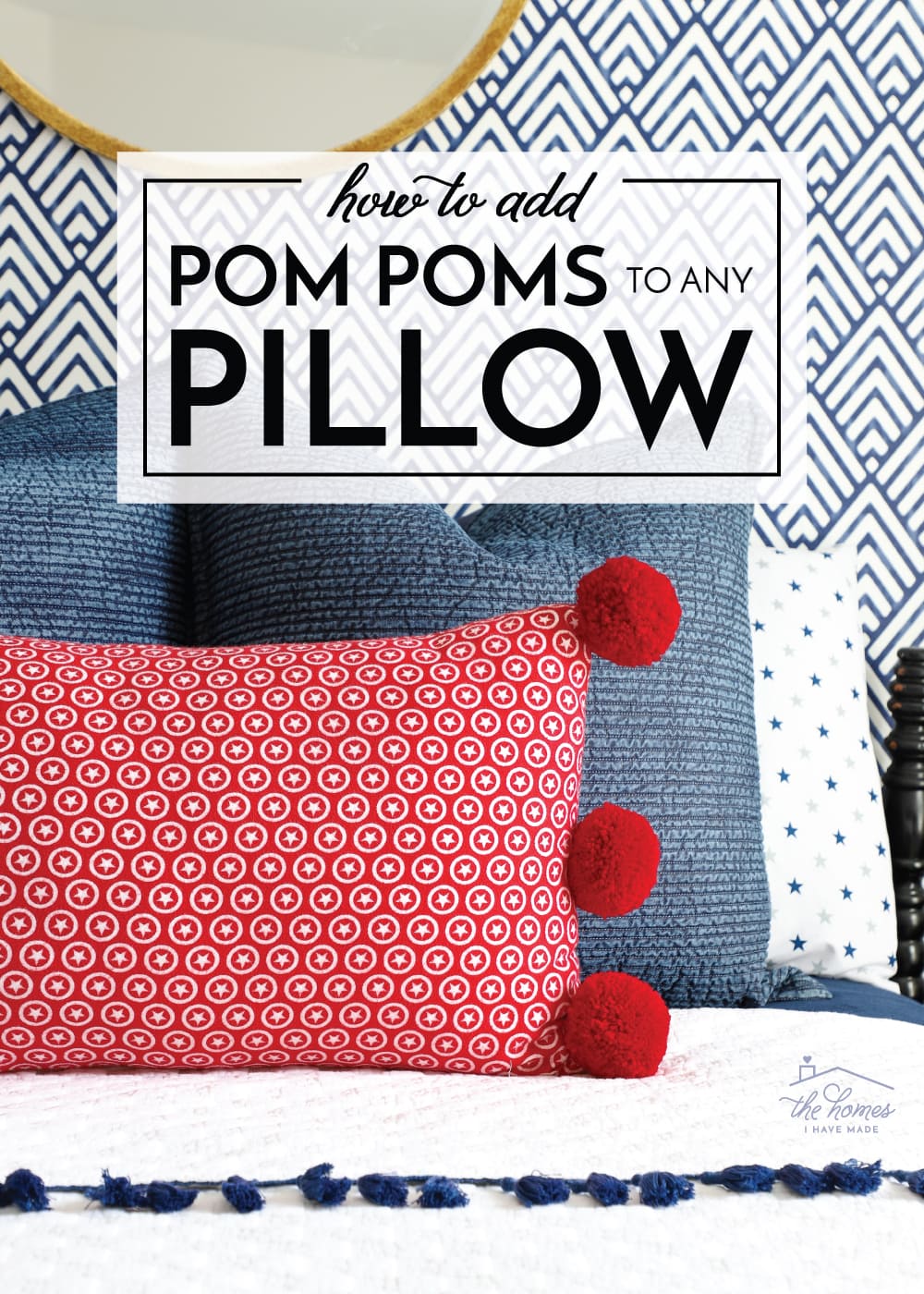 To add a splash of contrasting color to Sam’s Super Hero bedroom, I re-purposed his red flannel crib sheet into a simple little bolster pillow. It was certainly fine enough as it was, but I knew adding some oversized, fluffy pom-poms would bring texture and whimsy to his bed display. 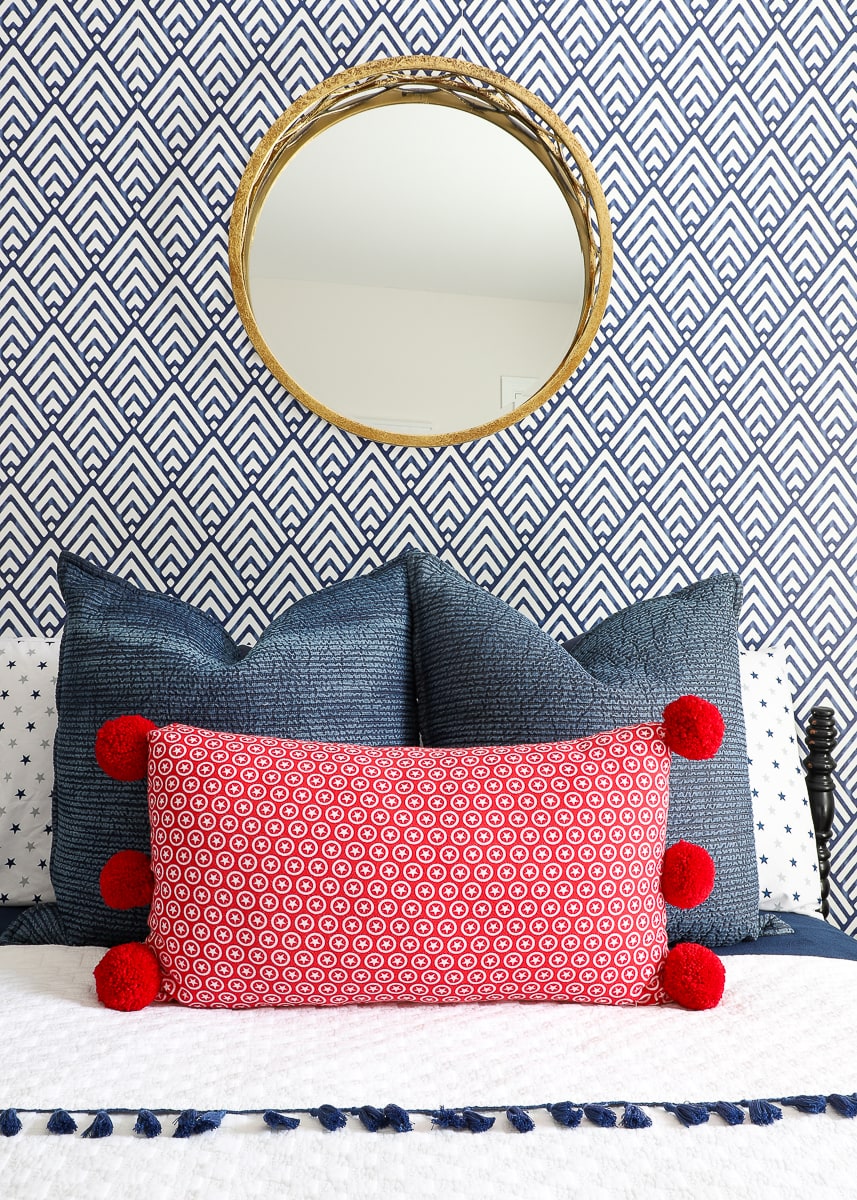 If you are making a pillow from scratch, it’s easy enough to add pom-poms into the seams as you sew it together. But this pillow was already made when I decided to add the pom-poms; and since it was a quick, inexpensive, re-purposing project at the time, I didn’t bother giving it a zipper. I couldn’t easily access the inside of my pillow, nor did I want to pull it apart, so adding the pom poms to the edges required a little ingenuity. Thankfully, it was super easy and something anyone can do to pretty much any pillow you have lying around (DIY versions or store bought)!

You can buy pre-made yarn pom poms, but as I said, they are super easy and fun to make yourself. That way you have total control on their size, color, and shape. Let me first show you how to make pom poms, then I’ll show you how to add them to your pillows!

How to Make Yarn Pom Poms

There are lots of DIY tutorials for making yarn pom poms without any fancy gadgets, but I could never get mine tight or fluffy enough. These plastic pom pom makers are so inexpensive, they are easy to use, and result in the fluffiest pom poms in a variety of sizes. I highly recommend having them around for a variety of projects and kids crafts. 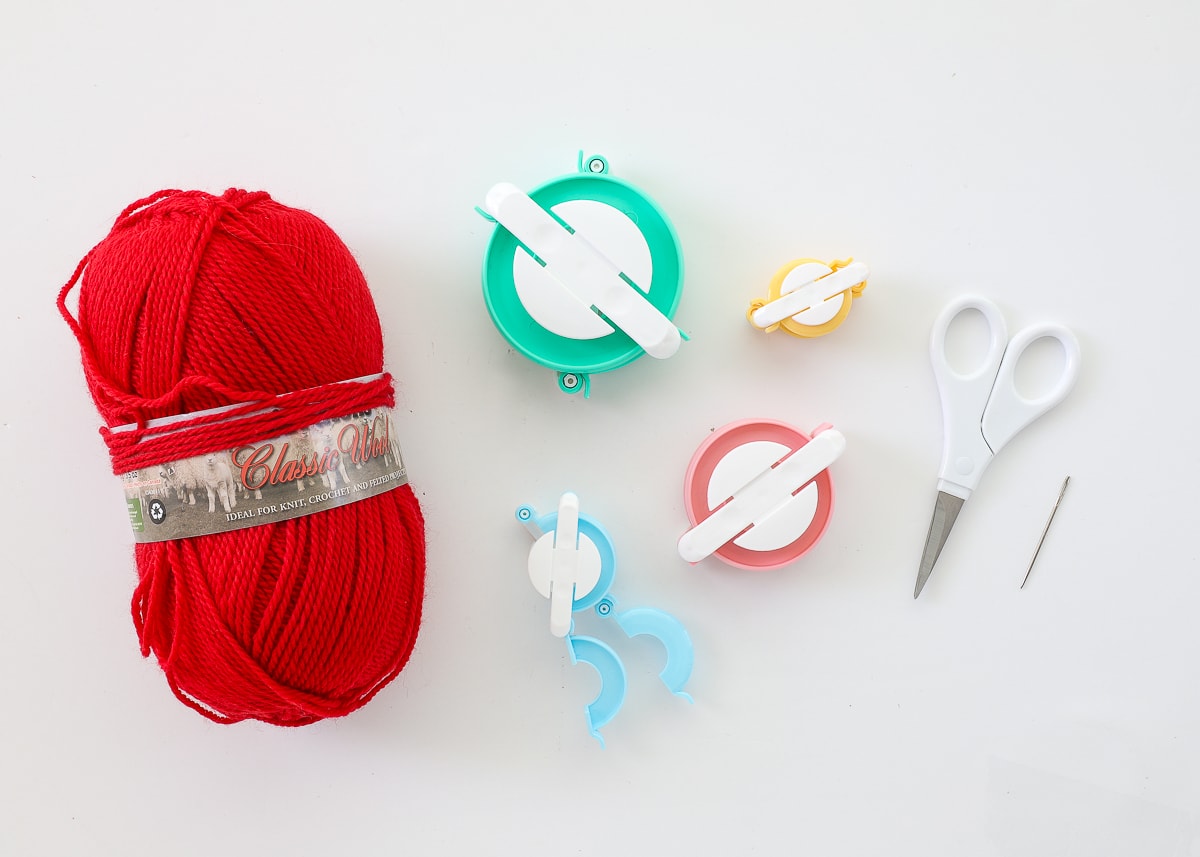 When making yarn pom poms, here are a few helpful things to keep in mind: 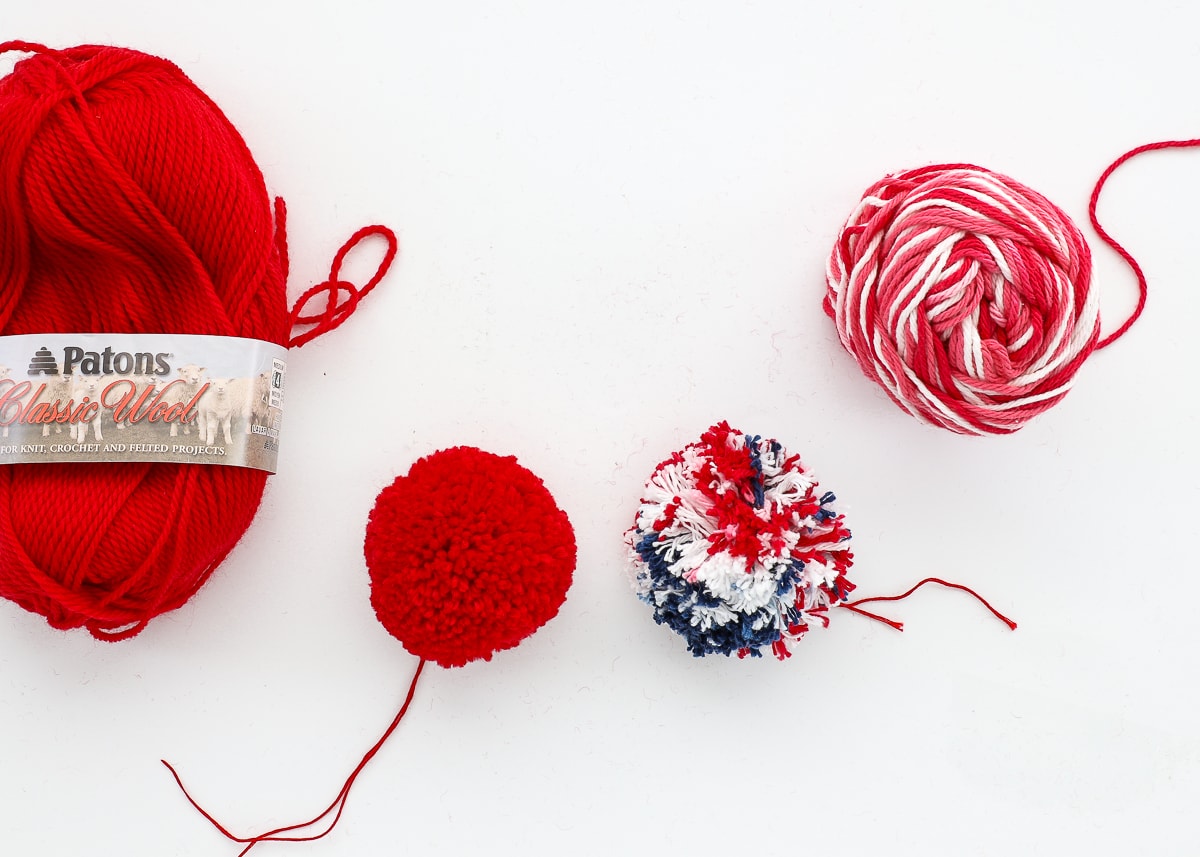 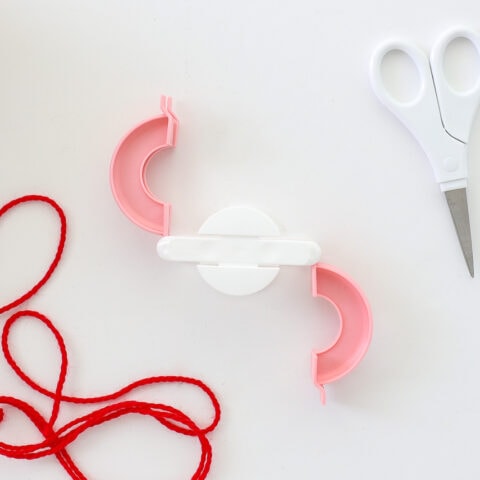 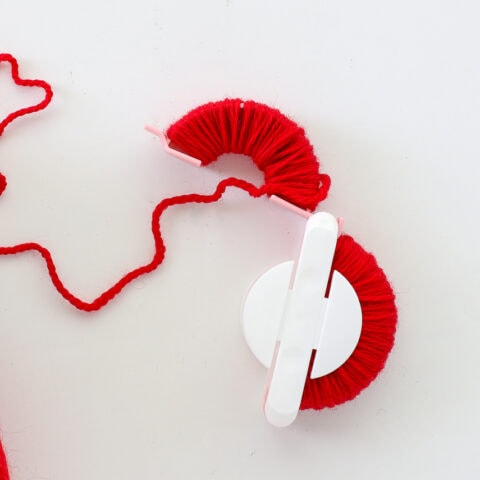 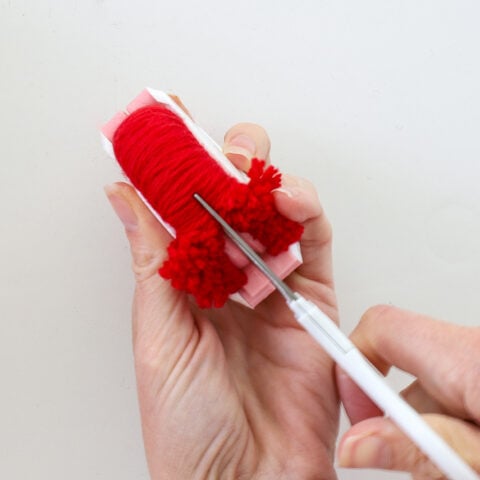 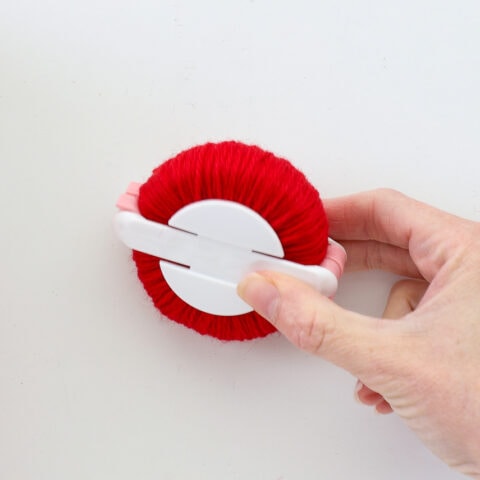 Cutting the yarn apart is easily the funnest step! Before taking the yarn off the loom though, grab about 12″ of embroidery floss or another length of yarn. 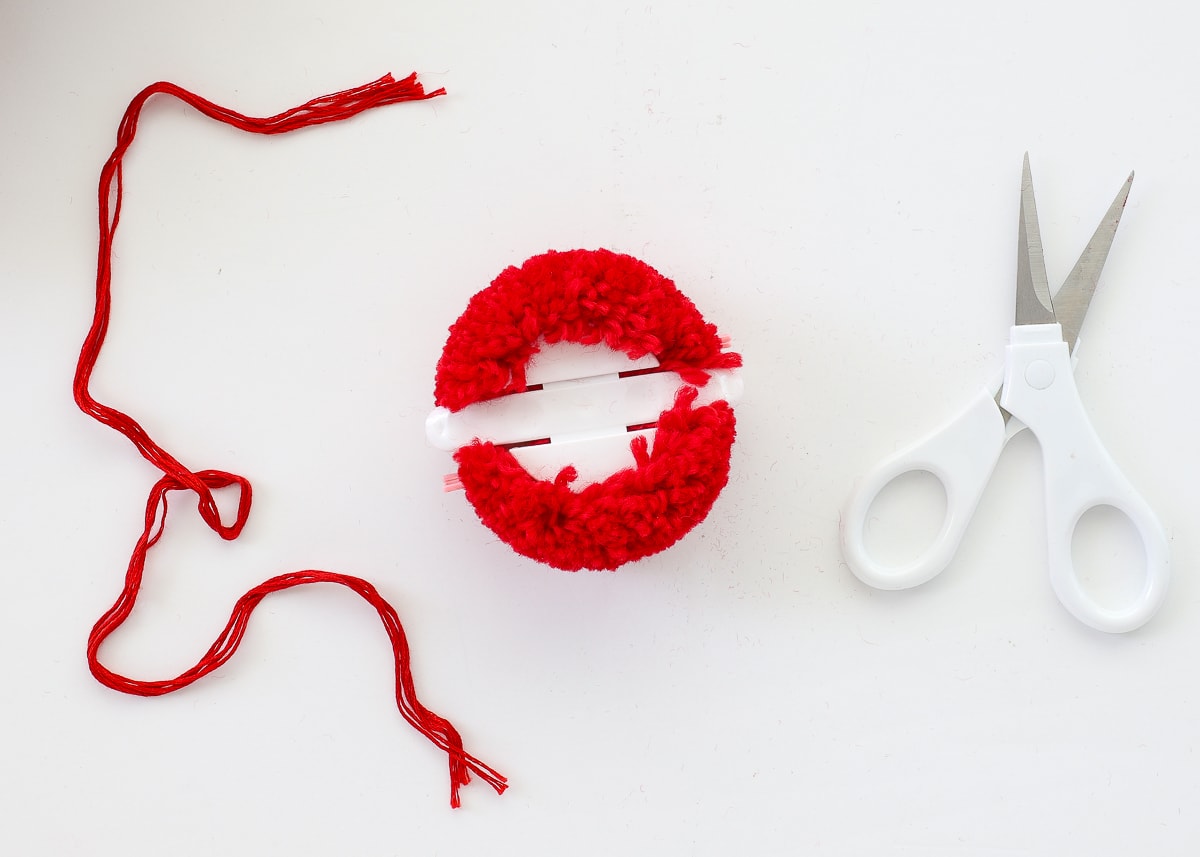 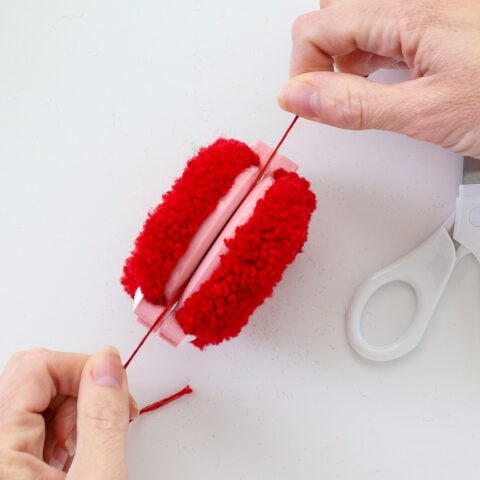 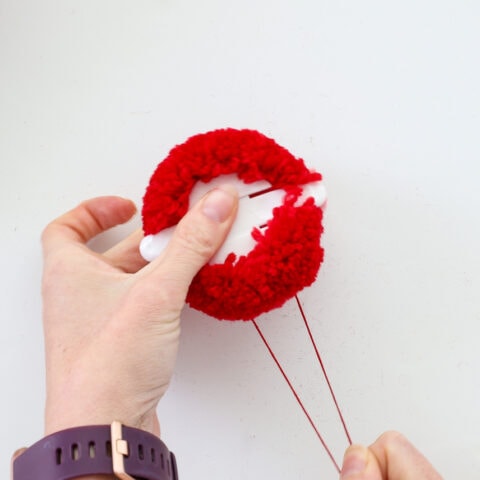 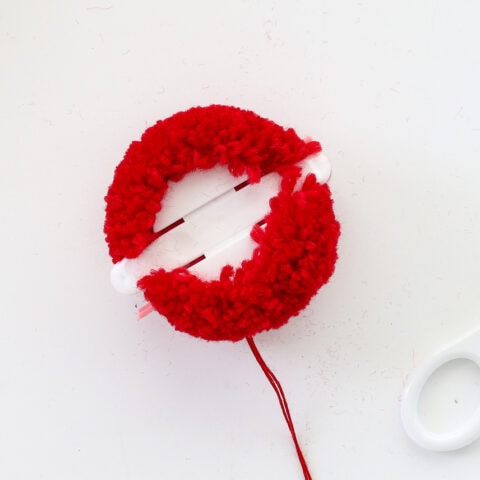 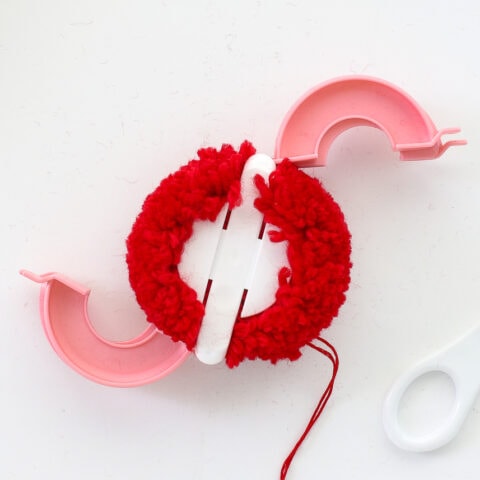 When the pom pom first comes off the loom, it will have some “stray hairs.” Use a scissors to clean it up and make the pom-pom even all the way around. Don’t get too snip happy though or you risk making it smaller and smaller and smaller! 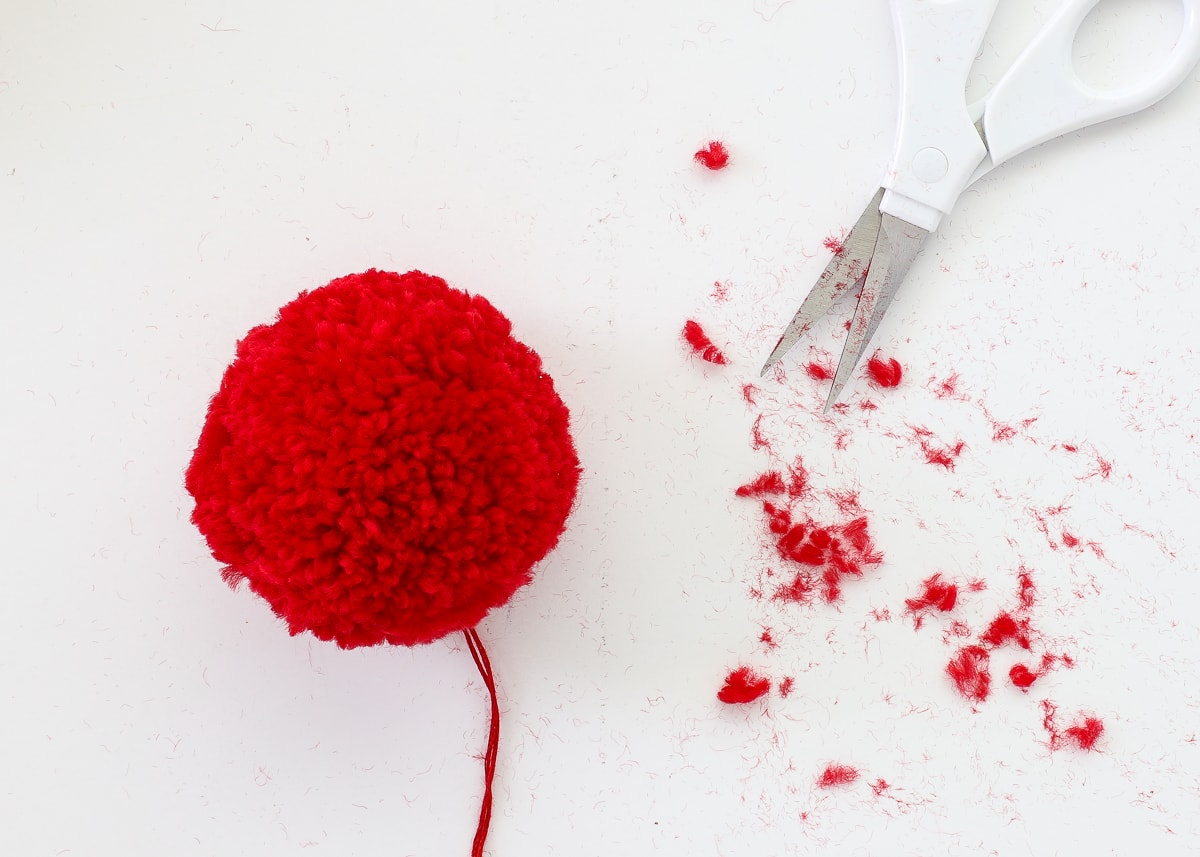 Repeat the process for as many pom poms as you need for your pillow!

As I said above, how your pillow is constructed will partly determine how you add pom poms to it:

IF YOUR PILLOW IS NOT YET SEWN TOGETHER:

IF YOUR PILLOW HAS A ZIPPER:

IF YOU CANNOT ACCESS THE INSIDE OF YOUR PILLOW: 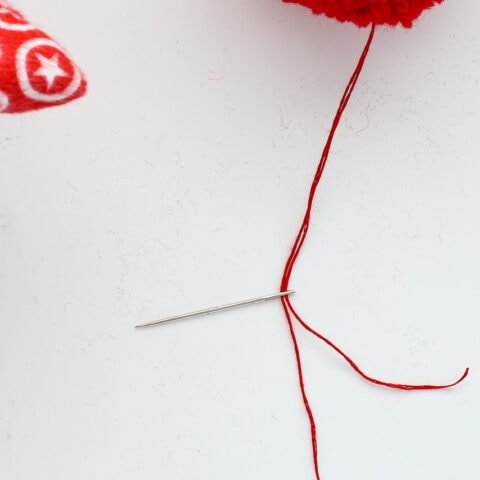 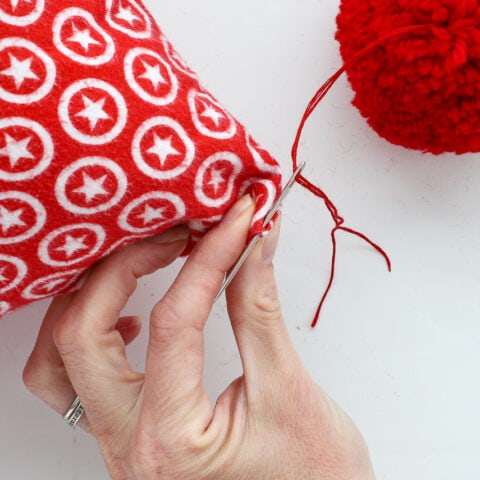 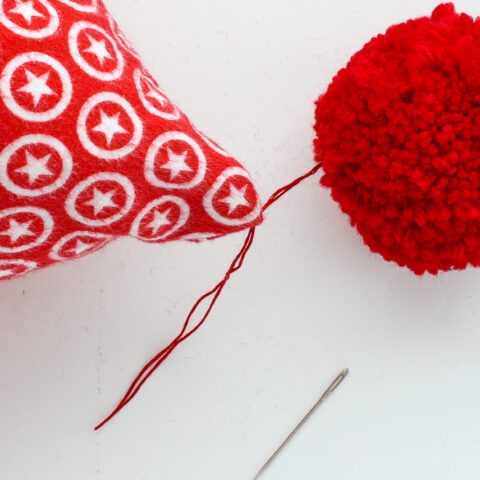 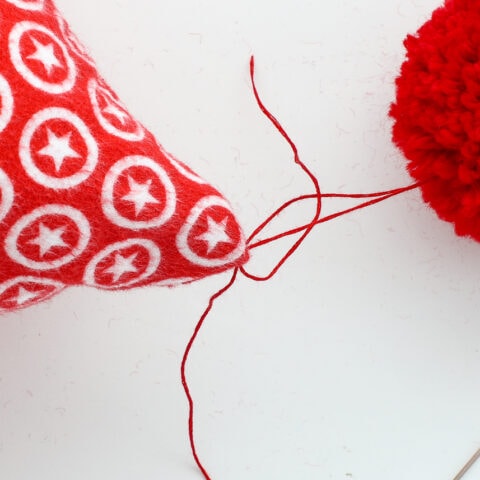 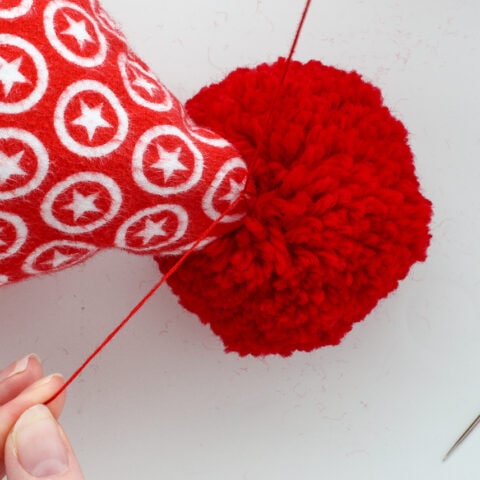 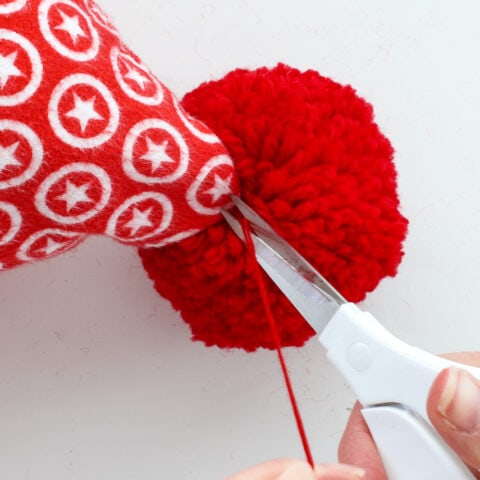 Repeat the process for your remaining pom poms. You can place them just at the corners, along the sides (as I did), or all the way around! 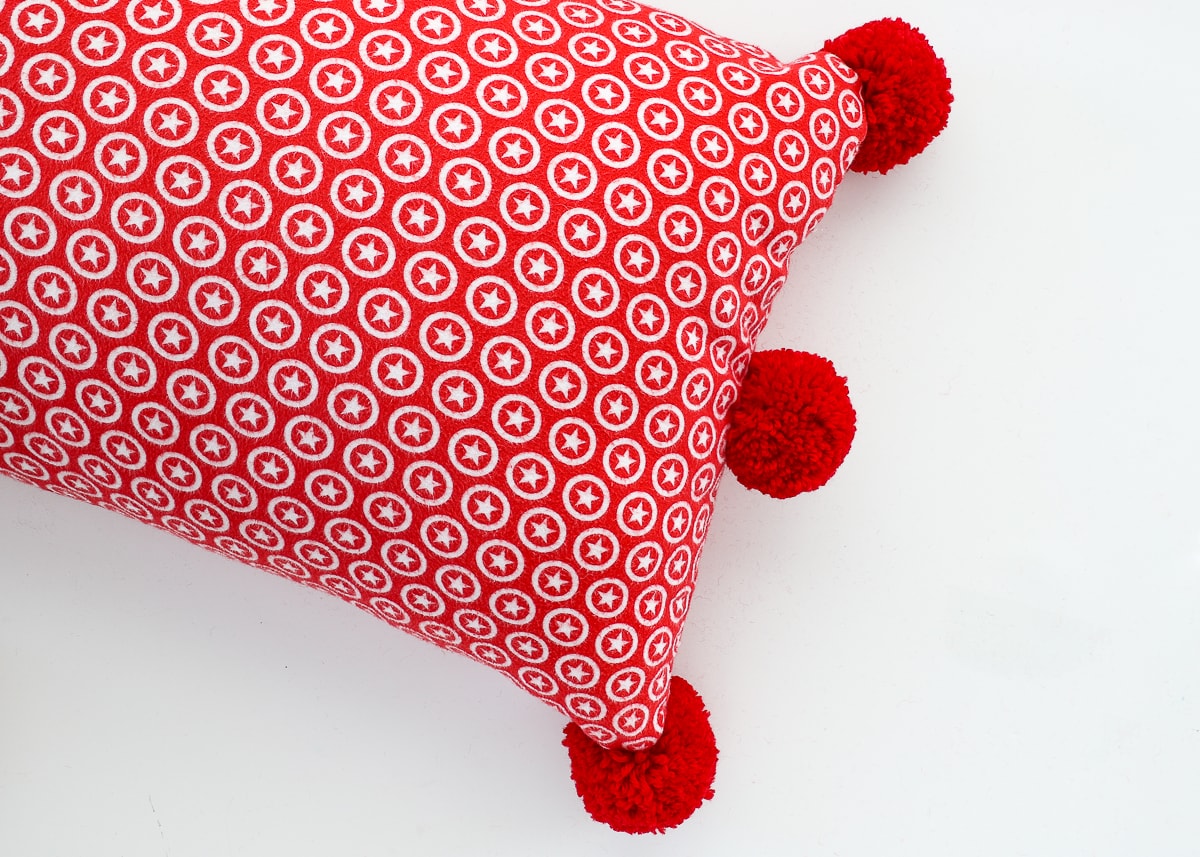 I have one more quick tip I learned only after my pom poms were attached. Although I placed my middle pom poms in the exact center of the pillow height, gravity causes them to hang down (rather than straight out), so it looks like off center. As such, I recommend sewing side pom-poms a little higher than where you want them to hang! 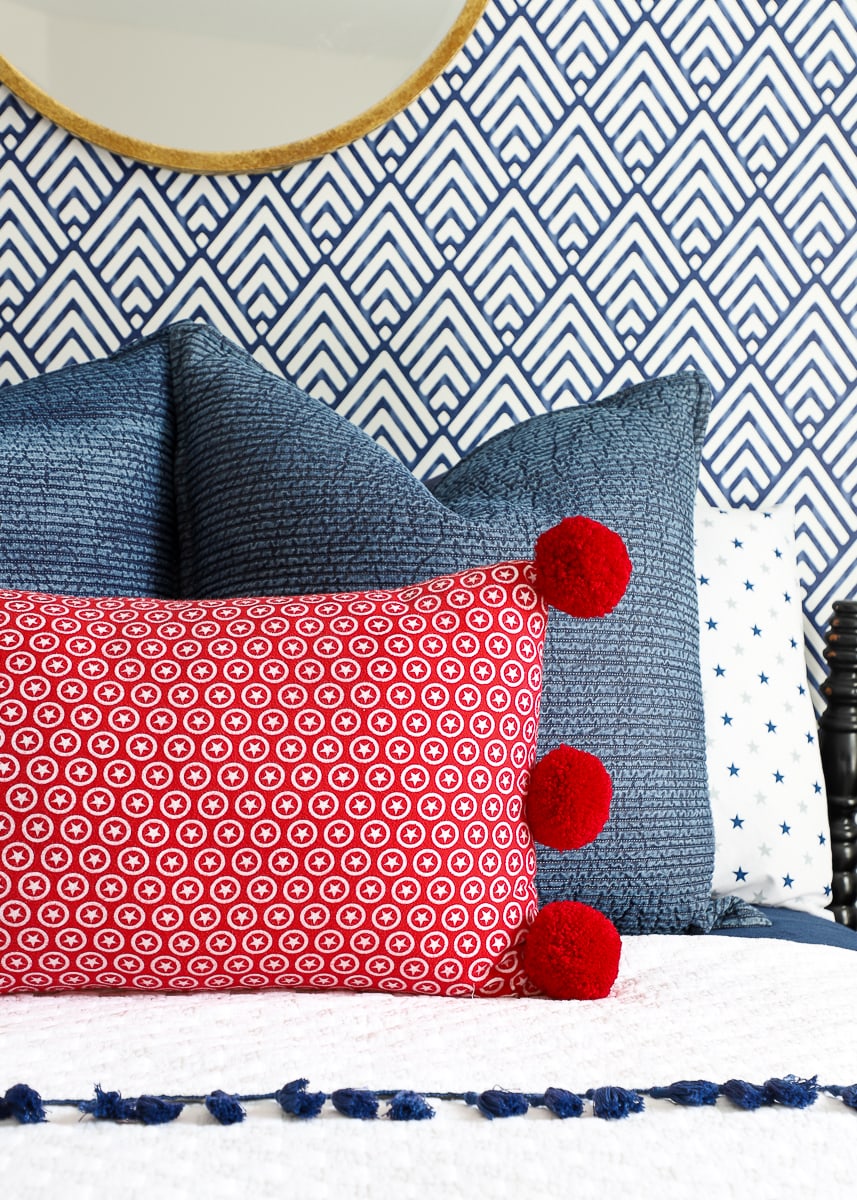 This was such a fun, easy, and inexpensive way to update a pillow we already had! I’m planning on making a super long bolster for our King bed, and I’m pretty sure I want to add fluffy ivory poms all the way around. Stay tuned for that! 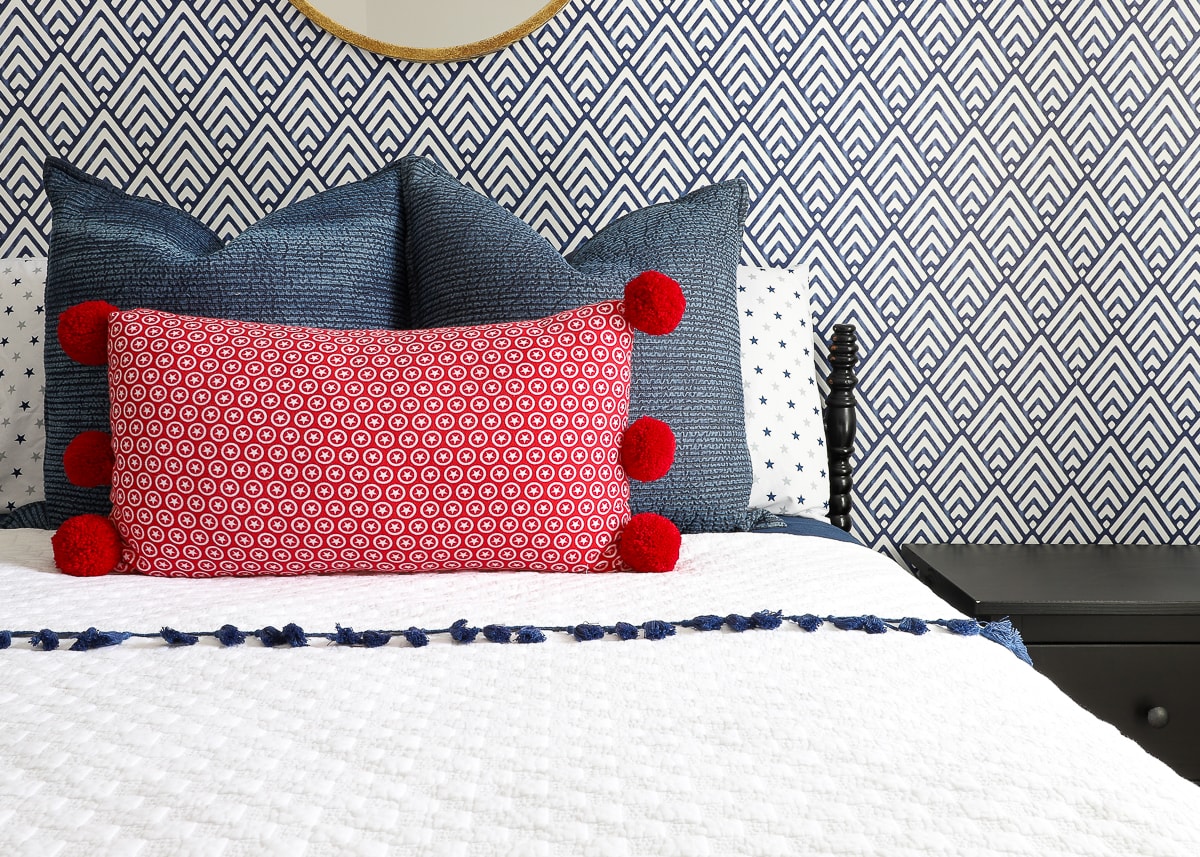 If you’re looking for a fun way to keep your hands busy (or even kiddos entertained!), I highly recommend making yarn pom poms. Beyond just adding them to pillows, you can use them to make nursery mobiles and garlands, accessorize blankets and baskets, and even turn them into keychains or bag pulls! I’m telling you…they are addicting…come join me on the band wagon! 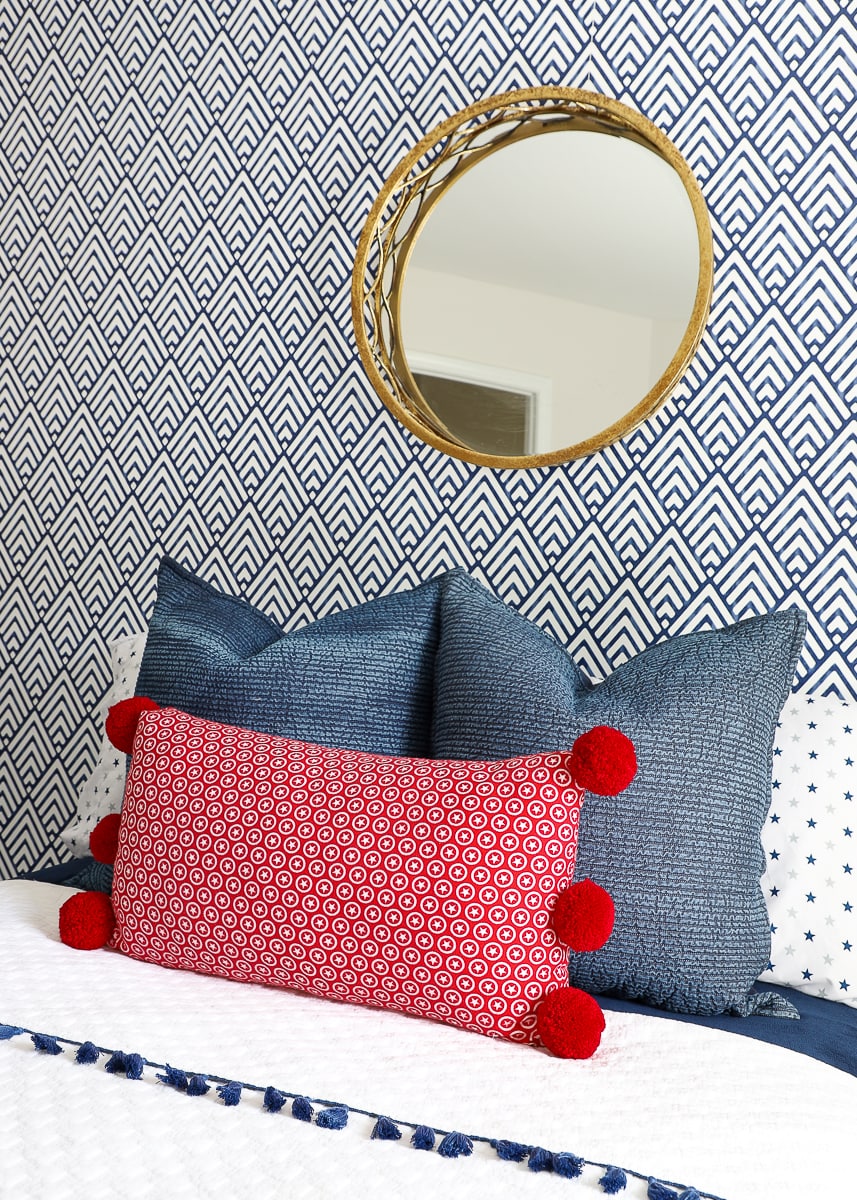 2 Comments on “How to Add Pom Poms to A Pillow”